Effects of Prebiotic and Probiotic Supplementation on Lactase Deficiency and Lactose Intolerance: A Systematic Review of Controlled Trials

Lactose intolerance (LI) is characterized by the presence of primarily gastrointestinal clinical signs resulting from colonic fermentation of lactose, the absorption of which is impaired due to a deficiency in the lactase enzyme. These clinical signs can be modified by several factors, including lactose dose, residual lactase expression, concurrent ingestion of other dietary components, gut-transit time, and enteric microbiome composition. In many of individuals with lactose malabsorption, clinical signs may be absent after consumption of normal amounts of milk or, in particular, dairy products (yogurt and cheese), which contain lactose partially digested by live bacteria. The intestinal microbiota can be modulated by biotic supplementation, which may alleviate the signs and symptoms of LI. This systematic review summarizes the available evidence on the influence of prebiotics and probiotics on lactase deficiency and LI. The literature search was conducted using the MEDLINE (via PUBMED) and SCOPUS databases following Preferred Reporting Items for Systematic Reviews and Meta-Analyses (PRISMA) guidelines, and included randomized controlled trials. For each study selected, the risk of bias was assessed following the Cochrane Collaboration methodology. Our findings showed varying degrees of efficacy but an overall positive relationship between probiotics and LI in relation to specific strains and concentrations. Limitations regarding the wide heterogeneity between the studies included in this review should be taken into account. Only one study examined the benefits of prebiotic supplementation and LI. So further clinical trials are needed in order to gather more evidence. View Full-Text
Keywords: prebiotics; probiotics; lactose intolerance; hydrogen breath test; vomiting; diarrhea; flatulence; abdominal pain prebiotics; probiotics; lactose intolerance; hydrogen breath test; vomiting; diarrhea; flatulence; abdominal pain
►▼ Show Figures 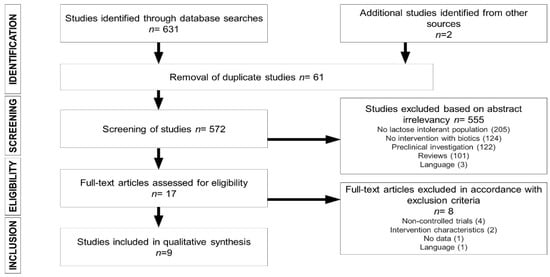