Prebiotic oligosaccharides are widely used as human and animal feed additives for their beneficial effects on the gut microbiota. However, there are limited data to assess the direct effect of such functional foods on the transcriptome of intestinal epithelial cells. The purpose of this study is to describe the differential transcriptomes and cellular pathways of colonic cells directly exposed to galacto-oligosaccharides (GOS) and fructo-oligosaccharides (FOS). We have examined the differential gene expression of polarized Caco–2 cells treated with GOS or FOS products and their respective mock-treated cells using mRNA sequencing (RNA-seq). A total of 89 significant differentially expressed genes were identified between GOS and mock-treated groups. For FOS treatment, a reduced number of 12 significant genes were observed to be differentially expressed relative to the control group. KEGG and gene ontology functional analysis revealed that genes up-regulated in the presence of GOS were involved in digestion and absorption processes, fatty acids and steroids metabolism, potential antimicrobial proteins, energy-dependent and -independent transmembrane trafficking of solutes and amino acids. Using our data, we have established complementary non-prebiotic modes of action for these frequently used dietary fibers. View Full-Text
Keywords: prebiotics; oligosaccharides; GOS; FOS; RNA-seq; transcriptome; functional pathway analysis; Caco–2; polarized monolayers prebiotics; oligosaccharides; GOS; FOS; RNA-seq; transcriptome; functional pathway analysis; Caco–2; polarized monolayers
►▼ Show Figures 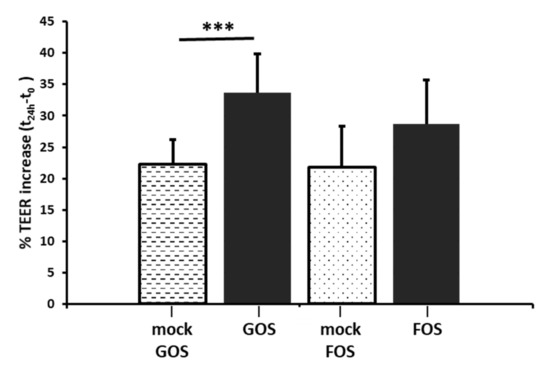