The Effects of Foods Embedded in Entertainment Media on Children’s Food Choices and Food Intake: A Systematic Review and Meta-Analyses
Previous Article in Special Issue

MK-7 and Its Effects on Bone Quality and Strength

Vitamin K acts as a cofactor and is required for post-translational γ-carboxylation of vitamin K-dependent proteins (VKDP). The current recommended daily intake (RDI) of vitamin K in most countries has been established based on normal coagulation requirements. Vitamin K1 and menaquinone (MK)-4 has been shown to decrease osteocalcin (OC) γ-carboxylation at RDI levels. Among the several vitamin K homologs, only MK-7 (vitamin K2) can promote γ-carboxylation of extrahepatic VKDPs, OC, and the matrix Gla protein at a nutritional dose around RDI. MK-7 has higher efficacy due to its higher bioavailability and longer half-life than other vitamin K homologs. As vitamin K1, MK-4, and MK-7 have distinct bioactivities, their RDIs should be established based on their relative activities. MK-7 increases bone mineral density and promotes bone quality and strength. Collagen production, and thus, bone quality may be affected by MK-7 or MK-4 converted from MK-7. In this review, we comprehensively discuss the various properties of MK-7. View Full-Text
Keywords: vitamin K2; menaquinone-7; osteocalcin; bone metabolism; bone quality vitamin K2; menaquinone-7; osteocalcin; bone metabolism; bone quality
►▼ Show Figures 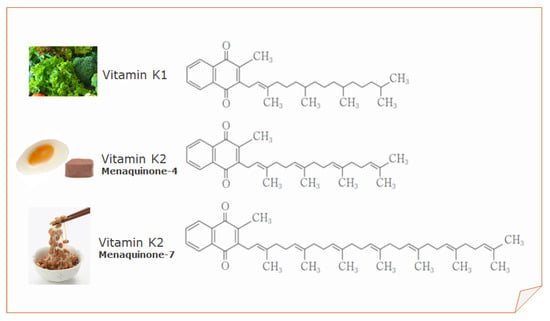