Julie A. Bastarache
2 and

Vitamin C (ascorbate, ASC) is a critical antioxidant in the body with specific roles in the brain. Despite a recent interest in vitamin C therapies for critical care medicine, little is known about vitamin C regulation during acute inflammation and critical illnesses such as sepsis. Using a cecal slurry (CS) model of sepsis in mice, we determined ASC and inflammatory changes in the brain following the initial treatment. ASC levels in the brain were acutely decreased by approximately 10% at 4 and 24 h post CS treatment. Changes were accompanied by a robust increase in liver ASC levels of up to 50%, indicating upregulation of synthesis beginning at 4 h and persisting up to 7 days post CS treatment. Several key cytokines interleukin 6 (IL-6), interleukin 1β (IL-1β), tumor necrosis factor alpha (TNFα), and chemokine (C-X-C motif) ligand 1 (CXCL1, KC/Gro) were also significantly elevated in the cortex at 4 h post CS treatment, although these levels returned to normal by 48 h. These data strongly suggest that ASC reserves are directly challenged throughout illness and recovery from sepsis. Given the timescale of this response, decreases in cortical ASC are likely driven by hyper-acute neuroinflammatory processes. However, future studies are required to confirm this relationship and to investigate how this deficiency may subsequently impact neuroinflammation.
Keywords: vitamin C; ascorbate; sepsis; brain; cecal slurry; inflammation; cytokines; mouse vitamin C; ascorbate; sepsis; brain; cecal slurry; inflammation; cytokines; mouse

Sepsis is estimated to affect more than 30 million people and account for more than 5 million deaths annually [1]. During this critical illness, the robust inflammatory response of the immune system includes release of multiple cytokines and other signaling molecules that can ultimately lead to severe tissue injury and multiple organ failure [2,3,4]. This damage extends to the brain as evidenced by delirium in the majority of patients [5]. Despite the advances in clinical understanding of delirium during sepsis, little is known about the cellular and molecular underpinnings of acute brain dysfunction in critically ill patients. Sepsis patients often exhibit low plasma levels of vitamin C (ascorbate, ASC) [6,7,8,9]. In one study, as many as 88% of sepsis patients had subnormal plasma levels of ASC (<23 µM) and up to 38% had severe ASC deficiency (<11 µM) [10], suggesting high demand for ASC during septic insult. Lower plasma levels of ASC are also associated with increased incidence of multiple organ failure and decreased survival [11]. The brain is particularly susceptible to this dysregulated inflammatory response and to suboptimal ASC levels, because higher oxidative stress levels in the brain are especially damaging to its enriched lipid composition and nutrient-demanding metabolic rate [12,13]. Up to 30% of patients are reported to experience cognitive deficits following recovery from sepsis [14,15,16], and several studies using rodent sepsis models have shown that acute illness damages cognition in surviving animals [17,18,19].
ASC is a critical antioxidant for cellular function and has an emerging role in immune function [20]. Preclinical studies have shown a variety of beneficial effects on the pathophysiological changes in sepsis, including protection against microvascular dysfunction and deficits in vasoconstriction [21,22,23] by preserving tight endothelial barrier function and capillary blood flow [24,25,26]. ASC administration during sepsis also attenuates acute lung injury [27] and improves multiple organ dysfunction syndrome in animal models of sepsis [28,29]. The role of intravenous ASC in clinical practice to improve short term patient recovery is still under clinical investigation [30,31]. ASC accumulates to high levels in the brain via the sodium-dependent vitamin C transporter 2 (SVCT2) in a two-step, energy-dependent process from blood into the choroid plexus cerebral spinal fluid and then into neurons [32]. In the brain, ASC serves two primary roles as a neuroprotector and neuromodulator [32,33,34]. ASC maintains blood–brain barrier integrity by preserving tight endothelial barriers [35,36] and maintaining capillary blood flow [37]. ASC is a critical enzymatic co-factor in neurotransmitter synthesis and DNA methylation [32,38], and is intimately involved in preserving glutamatergic neurotransmission through the glutamate-uptake ASC-release exchange [39,40,41]. Despite the interest in ASC as a treatment for preventing organ failure in sepsis, the roles of ASC in the brain, and the number of patients experiencing cognitive deficits following recovery from the acute trauma, the effects of sepsis on the brain are understudied. Furthermore, the specific role of ascorbate in sepsis-induced brain dysfunction has not been studied. Here, we utilized a cecal slurry (CS) model of sepsis in mice to observe changes in ASC and inflammatory response in the brain during and following sepsis. We hypothesized that ASC is depleted in sepsis, and sought to define a timeline for changes in ASC level and cytokine release, particularly in the brain.

All experiments conducted with live mice were reviewed and approved by the Vanderbilt Institutional Animal Care and Use Committee. Cecal slurry (CS) was used to induce acute peritonitis in mice as a model of sepsis as previously described [42,43,44]. C57/Bl6J donor mice at six weeks of age were obtained from Jackson Laboratory (#000664) and euthanized within 7 days of arrival. Cecal contents were collected and resuspended in 5% dextrose at 80 mg/mL, then filtered through a 100 µm filter. Aliquots were stored at -80 °C until ready for use.
All mice for treatment groups were bred in house from C57/Bl6J mice originally obtained from Jackson Laboratory. Mice at 10–12 weeks of age were treated with CS (1.5 mg/g; i.p.) or the vehicle 5% dextrose for control groups. Another widely used model of peripheral inflammatory response utilizes lipopolysaccharide (LPS) administration. For LPS studies, mice at 6–8 weeks of age received LPS (3.75 µg/g; i.p.) or saline. Control and treated mice were distributed across cages and provided with supplemental nutrition on the floor of the cage (DietGel 76A, Clear H2O) to promote survival.

An observer blinded to treatment groups scored the mice on the severity of sepsis using a 12-point scale of sickness severity, where 12 is healthy with normal activity and 0 is moribund [45,46]. In brief, the score is determined by response to finger poke (4 for normal, 3 for decreased, 2 for severely decreased, or 1 for minimal response), signs of encephalopathy (4 for normal, 3 for tremors or staggering, 2 for twisting movements, or 1 for turning), and general appearance (score is decreased by 1 for each display of piloerection, periorbital exudates, respiratory distress, or diarrhea). All mice were monitored closely for 48 h or until mice recovered to a normal score of 12. CS-treated mice that never received a score below 10 or died prior to the assigned timepoint were excluded from analysis.

Mice were anesthetized with isoflurane then euthanized by decapitation at 4, 24, 48 h or 7 days post-injection. Control mice were euthanized at each timepoint and data collapsed into one group. Tissue samples were collected, flash-frozen on dry ice, and stored at –80 °C for further analysis.

Sample extracts were prepared by adding 10 µl extraction buffer (7:2 25% w/v metaphosphoric acid: 100 mM sodium phosphate, 0.05 mM EDTA pH 8.0) per mg of wet tissue to normalize by weight. Samples were homogenized with 0.5 mm ceria-stabilized zirconium oxide beads (Next Advance, Inc.) in a bullet homogenizer, centrifuged at 10,000 rpm, and the clear supernatant transferred into a fresh tube. Concentrations of ASC were measured at 1:100 dilution in triplicate with ion pair HPLC, using tetrapentyl ammonium bromide as the ion pair reagent and electrochemical detection as previously described [47,48].

Statistical analyses were performed using Graphpad Prism software (version 8.3.0). Data were first checked for equality of group variances using the Brown–Forsyth test and analyzed using parametric statistics. We did not expect any differences in response to CS according to sex, and all data were first analyzed using a multivariate ANOVA analysis, including sex as an additional variable. There were no main effects of sex on any of the key outcomes (sickness score, weight loss, ASC levels) so data were combined for all subsequent analysis. For outcomes following CS treatment, data were analyzed with univariate ANOVA with group (encompassing treatments and time post treatment) as the main independent variable. Significant omnibus ANOVA were followed with Dunnett’s post hoc analyses to test difference from the control group. Independent t-tests were used to test effects of LPS versus treatment with the vehicle. Numerical outliers that likely reflected experimental error were identified and removed using ROUT (Q = 5%). Error bars are shown as SEM or SD as indicated in figure legends.

3.3. CS Treatment Does Not Induce Changes in Oxidative Stress Measurements

3.4. CS Treatment Initiates an Inflammatory Response in the Brain

The authors would like to thank Jordyn M Wilcox, Shilpy Dixit, Krista C Paffenroth, and John E Dugan for technical assistance in generating data for this manuscript, and James M May for providing valuable feedback on early versions of the manuscript. 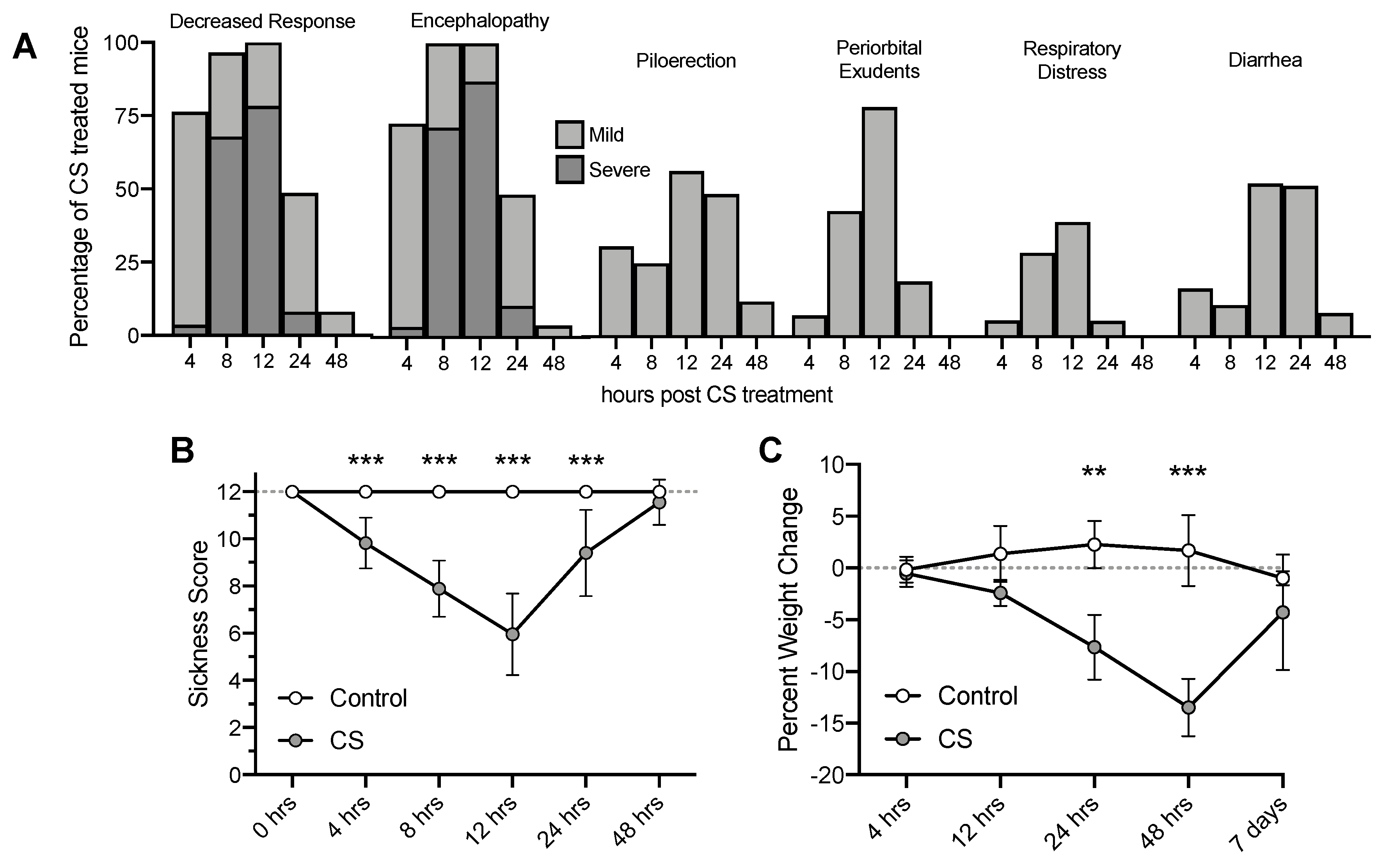 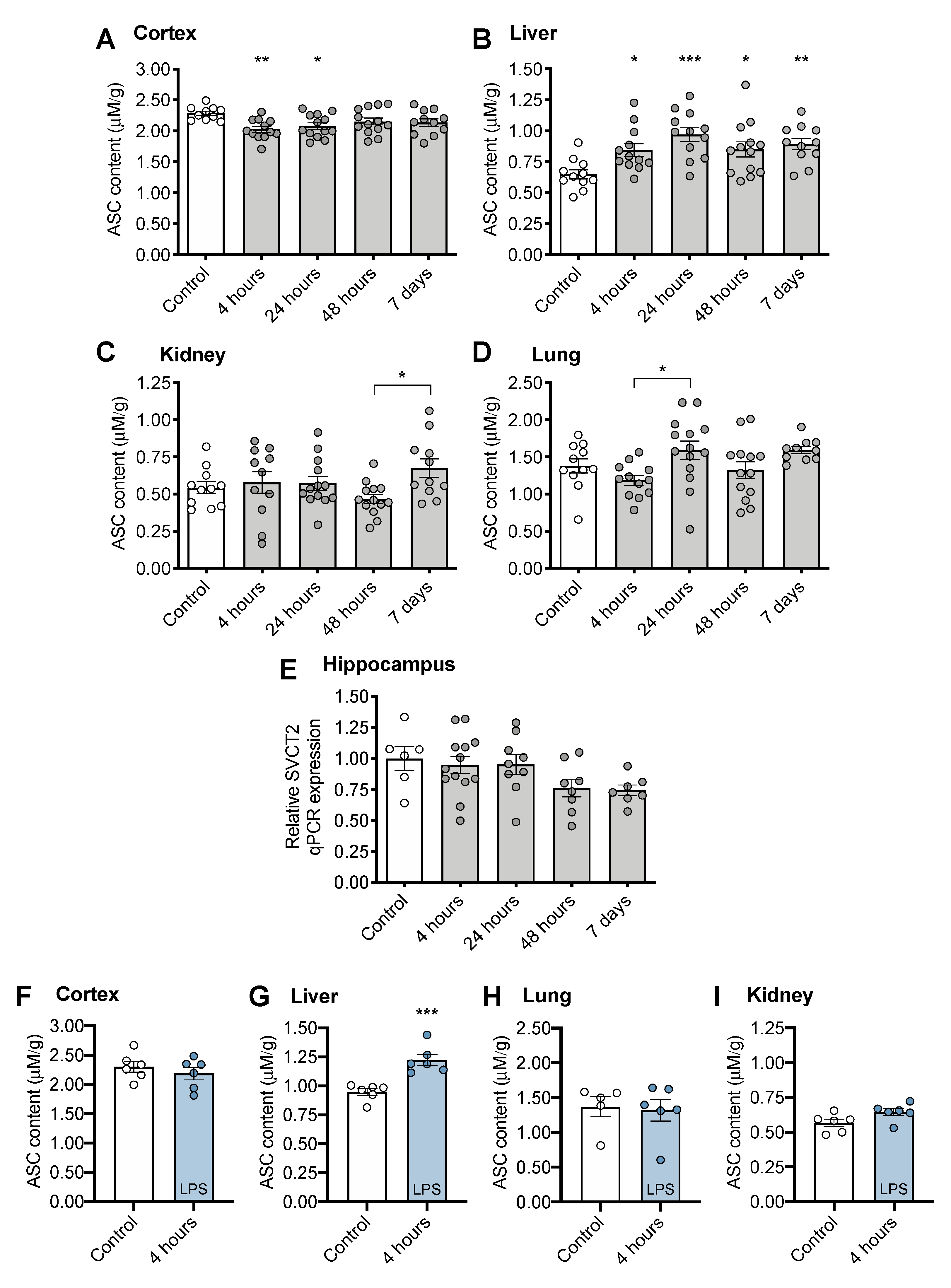 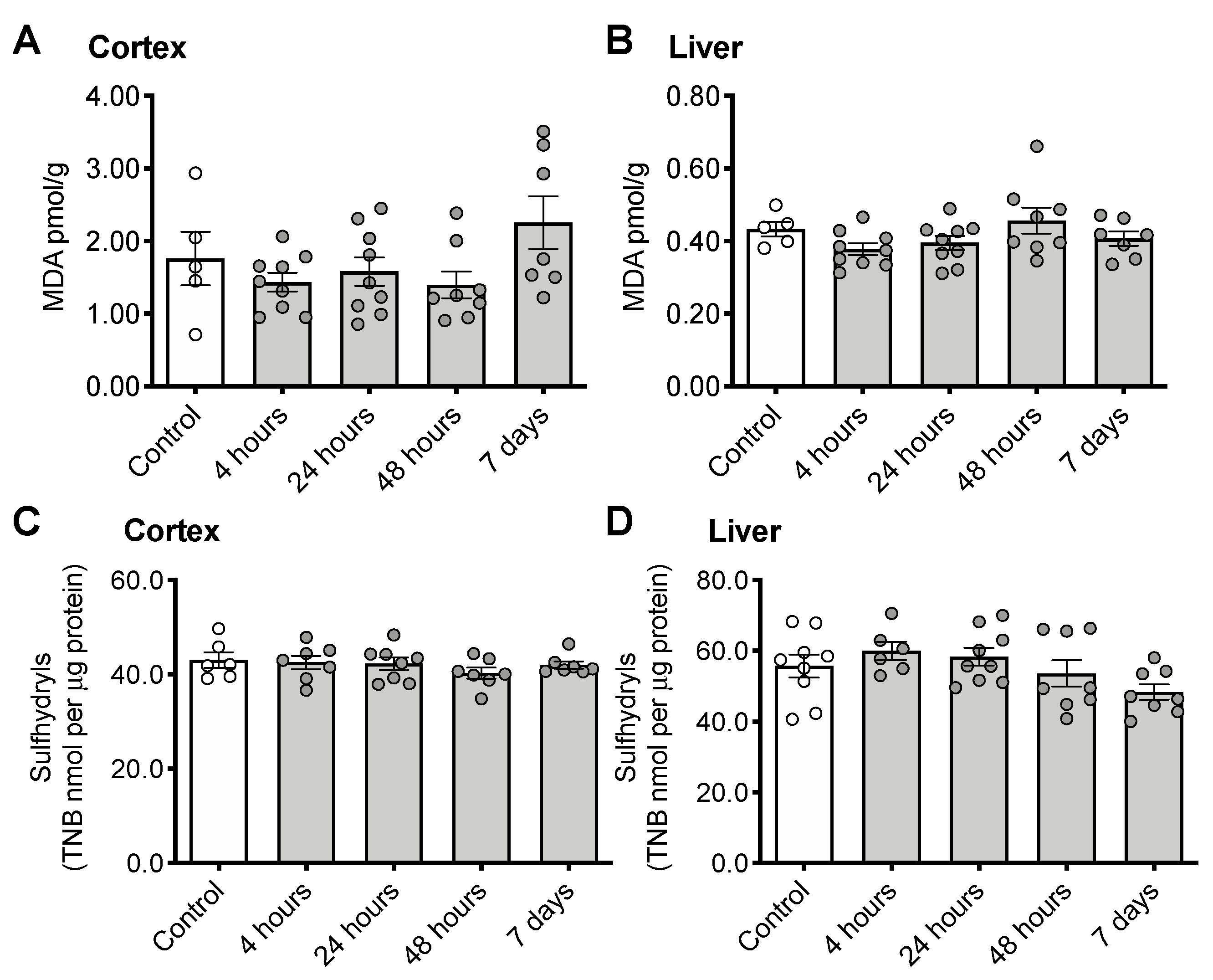 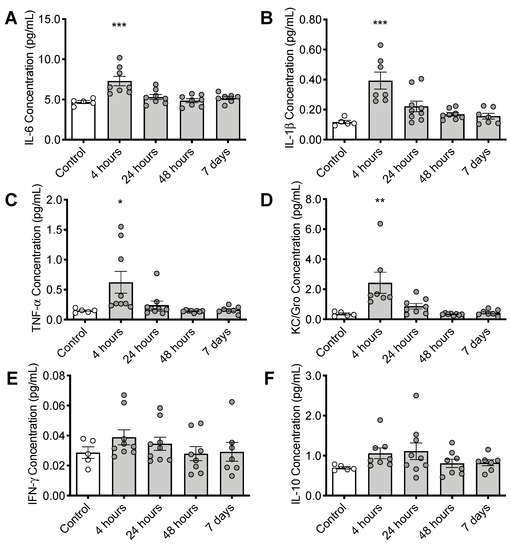 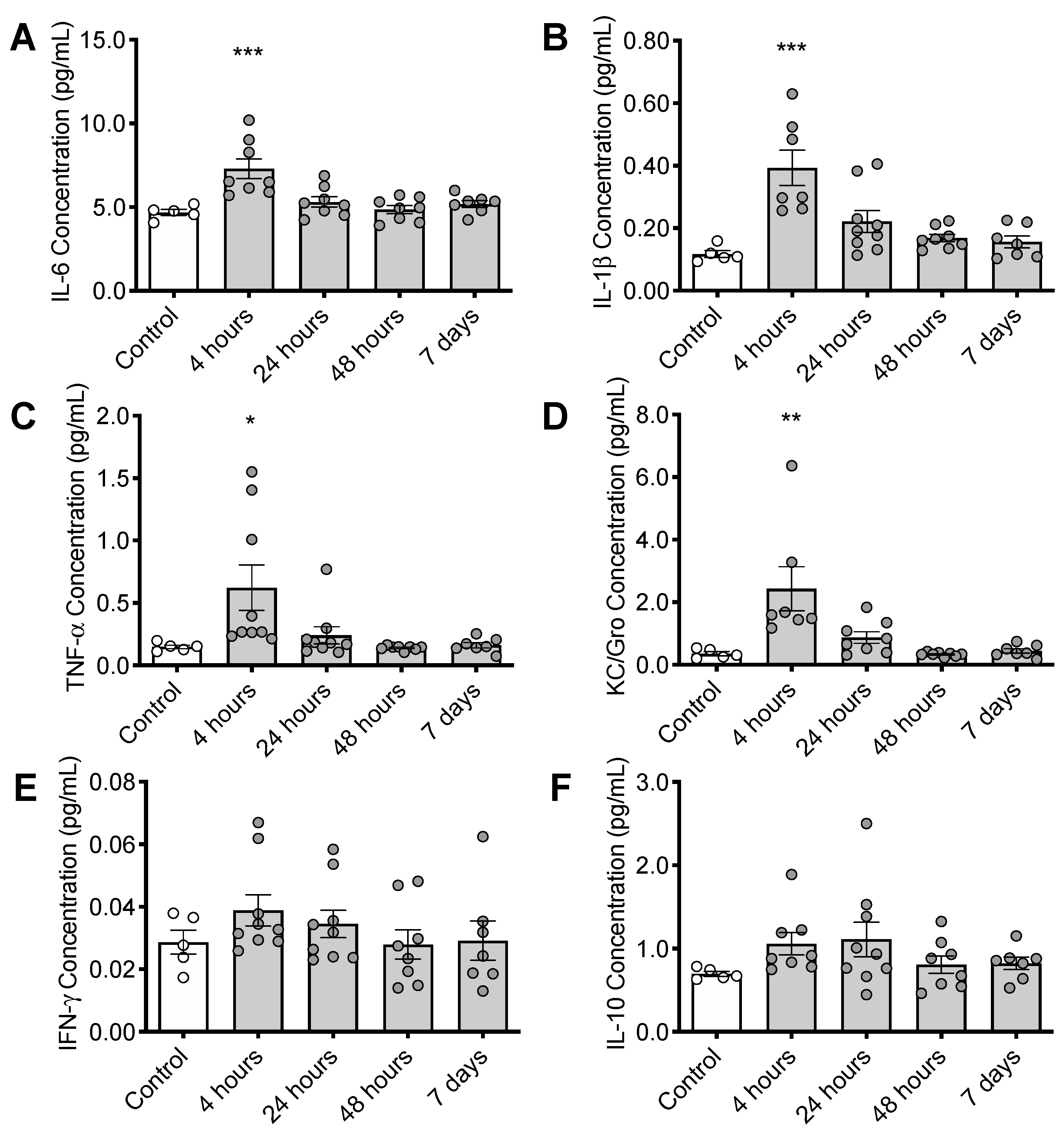