Insulin resistance is of particular interest as defective insulin signalling in the brain contributes to the accumulation of amyloid beta (Aβ) and tau protein, presenting a pathophysiological link between Alzheimer’s disease (AD) and type 2 diabetes (T2D) [1]. It has been previously described as diabetes of the brain, or type 3 diabetes [2]. The prevalence of insulin resistance is growing exponentially, with over 463 million people suffering from diabetes worldwide according to the recent edition of the International Diabetes Federation Atlas 2019, of which >90% are T2D. Recent evidence from a population-based study shows a link between T2D and AD, with an incidence 2–5 times higher in those with T2D [3] and hyperinsulinemia [4].
Islet amyloid polypeptide (IAPP) is a peptide hormone co-secreted with insulin by pancreatic β-cells [5]. Elevated serum levels of IAPP is a pathological hallmark of insulin resistance and correlates with AD diagnosis [6]. Furthermore, the amyloidosis of IAPP involving formation of Aβ-like structures and extracellular deposits of amyloid in the pancreas is a distinctive feature of T2D [5]. IAPP can also induce peripheral insulin resistance by antagonising insulin activity, further linking to the overexpression of glycogen synthase kinase-3 (GSK-3) [7]. Impaired insulin signalling and subsequent hyperactivity of GSK-3 in rodent and human models have been associated with the accumulation of Aβ and tau protein in the brain [8]. Recent research has uncovered a pathophysiological link between T2D and AD involving insulin resistance and the activation of GSK-3, a serine-threonine kinase involved in a multitude of physiological processes including glycogen metabolism and microtubule stability [9,10]. GSK-3 produces two isoforms (α and β) upon activation. Along with its pleiotropic roles in human physiology in skeletal muscle and liver, GSK-3 is linked to cognitive disorders and is thought to play an important role in the pathogenesis of AD [10]. Insulin triggers the phosphorylation (inactivation) of GSK-3 via the PI3k/Akt signalling cascade, while defective insulin signalling results in decreased phosphorylation and consequently elevated activation of GSK-3 in the brain [11]. Over-activity of GSK-3α mainly enhances plaque-associated aggregation of insoluble Aβ, while GSK-3β primarily contributes to the hyper-phosphorylation of tau [11]. The purported role of GSK-3 in the development of AD has led to it being investigated as a potential therapeutic target.
Curcumin is a bio-active curcuminoid, extracted from the rhizomes of turmeric with a wide range of pharmacological properties including the ability to reduce inflammation, oxidative stress and insulin resistance [12,13,14]. In vivo studies in animal models [13] and a few clinical trials [15] have shown beneficial effects of curcumin on insulin resistance. Systematic reviews have provided strong evidence for investigating curcumin efficacy for management of type 2 diabetes mellitus [15]. Substantial in vitro data are available on the anti-oxidant anti-inflammatory activities of curcumin, suggesting a possible link to its protective effect on dementia and AD [16]. In animal models, curcumin has been shown to reduce systemic inflammatory markers (cyclooxygenase (COX-2) and phospholipases; transcription factors such as nuclear factor kappa-B; pro-inflammatory cytokines such as tumour necrosis factor-α and IL-1β and C-reactive protein (CRP) concentrations) suggesting a possible link between its anti-inflammatory and cognitive protection effects [17]. Curcumin has been proven to have strong antioxidant action by the inhibition of the formation and of free radicals [18]. It decreases the oxidation of low-density lipoprotein that cause the deterioration of neurons, not only in AD but also in other neuron degenerative disorders (Huntington’s and Parkinson’s disease) [18]. Curcumin also increased memory function and non-spatial memory related parameters in aged rodent models with cognitive impairments [19,20,21]. Curcumin inhibits the activity of activator protein-1, a transcription factor implicated in the expression of Aβ [22]. Increasing evidence suggests that curcumin supplementation mitigates Aβ deposition and tauopathy whilst exerting inhibitory effects on GSK-3 activity via interactions with the PI3k/Akt cascade [23]. Epidemiologic studies also suggest a link between curcumin and cognitive benefits. Ng et al. [24] observed that subjects with higher curry (curcumin is a common ingredient) consumption had 6% higher Mini-Mental State Examination (MMSE) scores compared with subjects who never or rarely consume curry.
The widespread use of curcumin as an additive, the relatively high safety profile established in a number of short-term trials and the potency of curcumin to suppress insulin resistance could be a beneficial factor in management of both T2D and AD. The aim of this study was to determine if dietary supplementation with curcumin reduce plasma levels of peptides, GSK-3β and IAPP that are implicated in the insulin resistance in people at a high risk of developing T2D.

Participants were recruited for the purposes of the curcumin and omega-3 fatty acids for prevention of type 2 diabetes (COP-D) study [25] from the Hunter region in New South Wales, Australia. Interested participants were screened through telephone interviews per the inclusion and exclusion criteria. If eligible, potential participants were posted self-administered health/medical, diet, and physical activity questionnaires as well as a consent form. Inclusion criteria for the current study included: aged of 30–70 (years); body mass index (BMI) of 25–45 kg/m2; ≥12 score in the Australian Type 2 Diabetes Risk (AUSDRISK) questionnaire (a non-invasive questionnaire for assessing the risk of developing type 2 diabetes); diagnosed with either impaired fasting glucose (IFG, fasting glucose of 6.1–6.9 mmol/L) or impaired glucose tolerance (IGT, 2-h plasma glucose ≥7.8 mmol/L and <11.1 mmol/L) or both; and glycosylated haemoglobin (HbA1c) levels of 5.7–6.4%. Participants were excluded if they were unwilling to provide blood samples at the baseline and post-intervention (12-week) site visits; diagnosed with T2D; gallbladder problems; pacemaker implants; severe neurological diseases or seizures; pregnant, planning to become pregnant or breastfeeding/lactating; taking any dietary supplements (such as fish oil, cinnamon, probiotics, vitamin D, chromium, etc.) known to influence blood glucose levels; consuming ≥2 servings of oily fish per week; or taking any medications known to have drug-nutrient interactions with curcumin (blood thinning medications such as Aspirin and warfarin). All participants gave their written informed consent. The study was conducted in accordance with the Declaration of Helsinki, and has been approved by the University of Newcastle Human Research Ethics Committee (H-2014-0385). The trial is registered with the Australia & New Zealand Clinical Trial Registry (ACTRN12615000559516).

The detailed protocol of the current study is previously published [25]. Screened participants were randomised to placebo (2 × placebo tablets matching for curcumin) and curcumin (2 × 500 mg curcumin tablets [Meriva®] providing 180 mg of curcumin per day). Participant compliance was measured during the follow-up (6-week) and post-intervention (12-week) site visits via a capsule count-back method and capsule intake log. Any illnesses, changes in medications or medical diagnoses during the study timeframe were recorded.

Medical history data collected include medication and supplement use as well as family medical history. Demographic characteristics collected from participants include age, sex and ethnicity. Participants were advised to maintain their regular dietary pattern and physical activity levels throughout the 12-week study period. To estimate their habitual dietary patterns, participants were asked to complete a 3-day (2 weekdays plus 1 weekend day) food diary prior to all three site visits. Food diaries were analysed using FoodWorks Xyris (version 8.0) to assess changes in energy intakes (kJ) during the study period. Habitual physical activity (METs, minutes/week) was assessed using the International Physical Activity Questionnaire (IPAQ) long form version (2002), which was completed by participants prior to all three site visits.

For the purposes of the current sub-study, n = 29 (15 allocated to placebo group and 14 allocated to curcumin treatment group) participants were analysed for GSK-3β and IAPP resulting in a study power of 97.7% for the detection of a 2.4 ng/mL reduction in serum GSK-3β level (1.3 ng/mL SD, p value = 0.01). Data collected at baseline were analysed for normality using histograms with a normal distribution curve overlaid the Shapiro–Wilk test, and are presented as mean ± SEM (standard error of the mean) or median (IQR, interquartile range) as appropriate. Significant changes in the baseline data between the two intervention groups were assessed through t-test or Mann–Whitney U Test when the normality assumption was not met. Post-intervention data are presented as mean ± SEM or median (IQR) of absolute change (post-intervention value minus baseline value). Changes from baseline to post-intervention within treatment groups were assessed through t-test or Wilcoxon signed-rank test.

Twenty-nine serum samples were analysed from the COP-D trial for the primary outcome, GSK-3β, and for IAPP. No significant differences were observed between the two participant groups for all baseline characteristics, including demographics and serum outcome measures (Table 1). All participants were insulin resistant, with an average fasting glucose of 5.4 ± 0.1 mmol/L and median fasting serum insulin of 9.9 (4.9) mIU/L. Trial participants had a median GSK-3β of 3.0 (1.7) ng/mL and median IAPP of 4.5 (2.6) ng/mL. Likewise, there were no significant changes in dietary intake or physical activity within and between the two groups post-intervention (Table 2). Comparisons between the placebo and curcumin group showed no significant differences in the body composition and anthropometric measurements collected at baseline and post intervention (Table 1 and Table 2). The average BMI of participants at baseline was within the obese category (≥30 kg/m2) and was accompanied by high body fat per cent (34.7 ± 1.8%) and waist circumference (105.4 ± 2.4 cm). There were no significant changes in body composition and anthropometric measurements post-intervention (Table 2). According to the capsule count, mean compliance to the randomised intervention was 94.9 ± 5.80%. Curcumin was well tolerated by participants and no adverse events due to the allocated intervention were reported during the 12-week study period.

Serum insulin was significantly reduced (p value = 0.0076) in the curcumin treatment group (−1.9 µIU) from baseline (Table 2) and was also significantly different from placebo (0.0115). Similar trends were observed with respect to HOMA2-IR (Figure 3) in curcumin group. Post-intervention, significant changes (p value = 0.0142) in HOMA2-IR were only observed in the curcumin treated group (−0.11 ± 0.05) compared to the placebo group. No significant changes were observed on blood glucose levels after supplementation with curcumin (p = 0.9747) compared to the placebo group.

This project was supported by a pliot grant from the Mary Castello bequest for Alzheimer s Disease Research and the Faculty of Health and Medicine, University of Newcastle.

Community members (Hunter and Newcastle, NSW, Australia) are acknowledged for their participation in the study and Indena SpA for providing curcumin and placebo tablets at no cost. 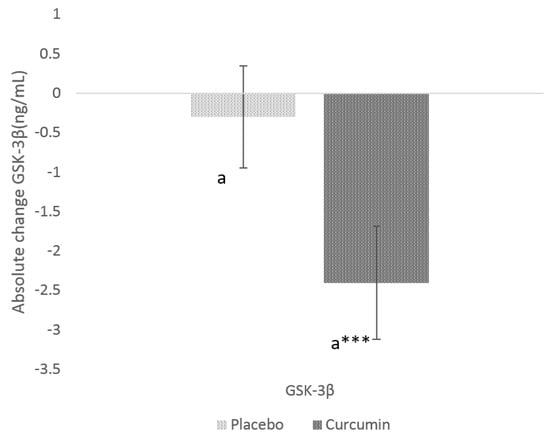 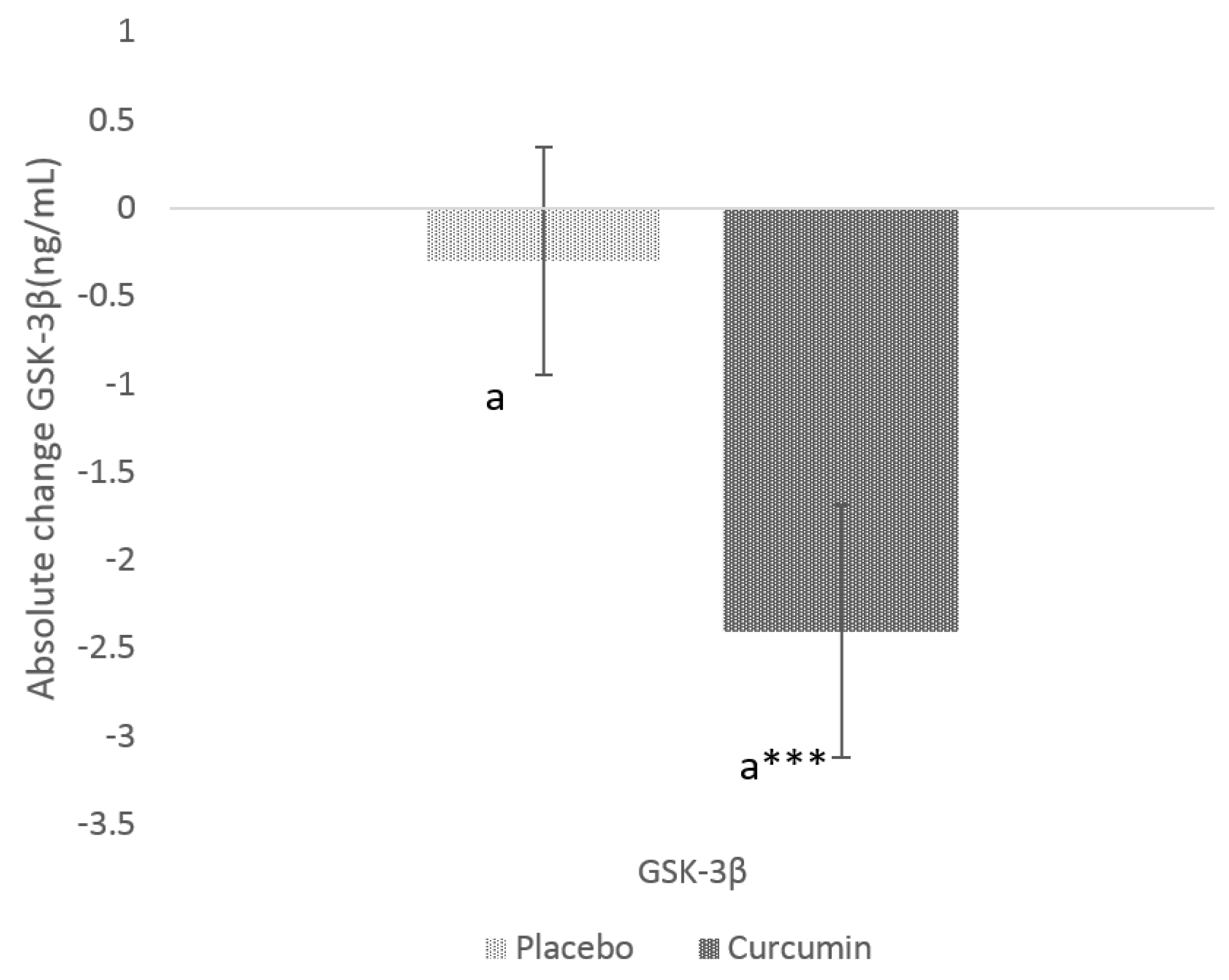 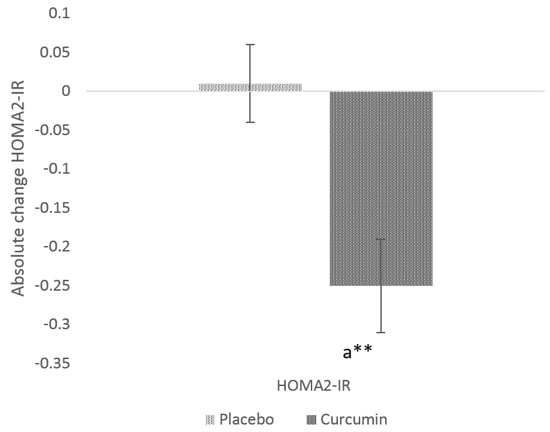 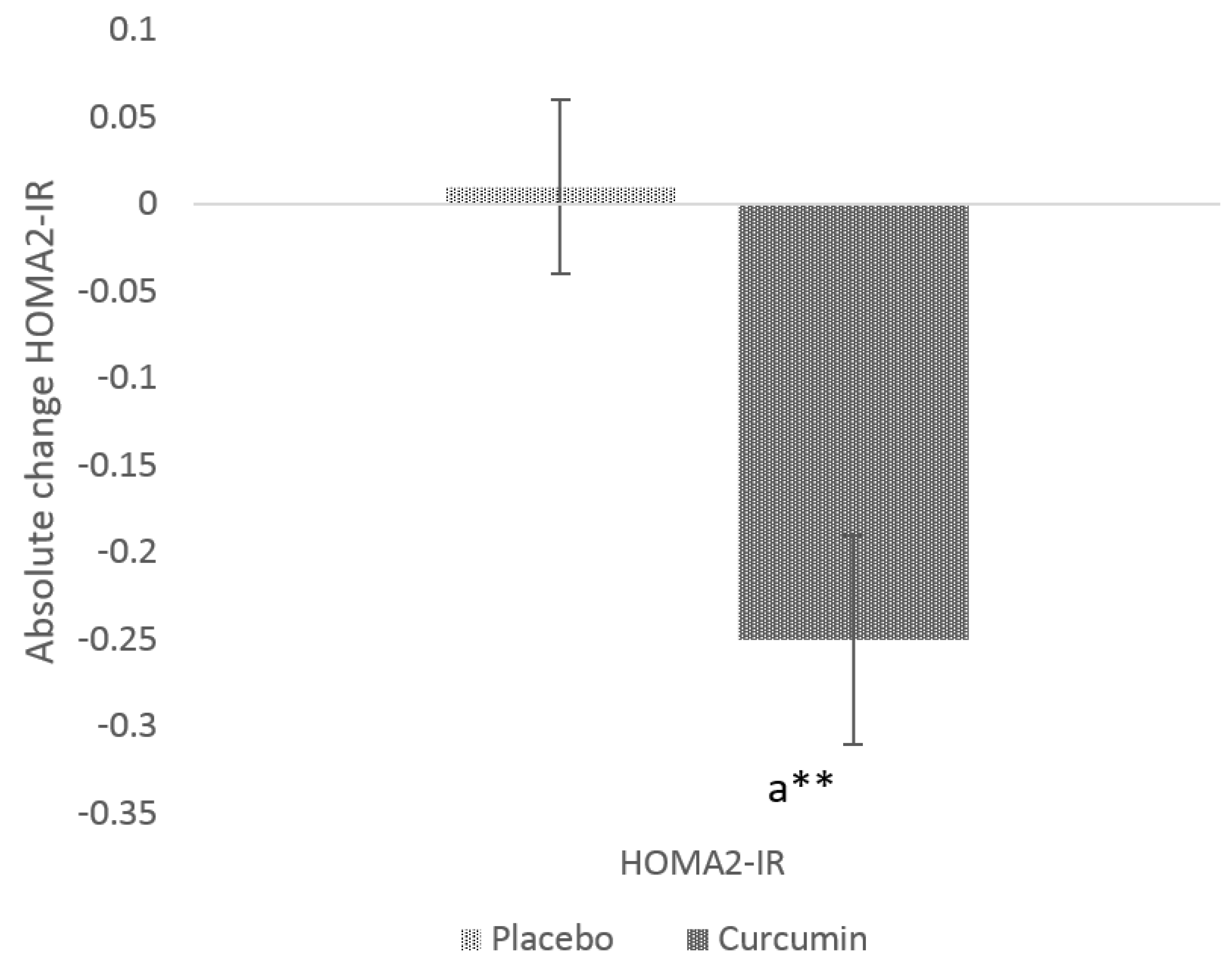