High Variability in Erythrocyte, Plasma and Whole Blood EPA and DHA Levels in Response to Supplementation
Previous Article in Journal

Association of Sugar-Sweetened Beverage Frequency with Adiposity: Evidence from the “Children of 1997” Birth Cohort

Sales of Sugar-Sweetened Beverages in Australia: A Trend Analysis from 1997 to 2018

Lowering intake of sugar-sweetened beverages (SSBs) is being advocated as an obesity prevention strategy in Australia. The purpose of this study was to extend on previous reports of trends in national volume sales of SSBs. Data were extracted from commercially available datasets of beverage sales (AC Nielsen (1997–2011) and IRI Australia (2009–2018)). Linear regression was used to examine trends for the period 1997 to 2018. Per capita attribution of volume sales and sugar contribution was estimated by dividing by the Australian resident population for the relevant year. Per capita volume sales of SSBs fell 27%, from 83L/person to 61L/person, largely driven by declining sales of sugar-sweetened carbonated soft drinks (76 to 45L/person). Volume sales of non-SSB increased, from 48 to 88L/person, the largest contributor being pure unflavoured still waters (6 to 48L/person). Volume sales of non-SSBs have exceeded those of SSBs since 2015. The yearly contribution of SSBs to the sugar content of the national diet declined from 9.0 to 6.4kg/person. Major, long-term shifts are occurring in the market for non-alcoholic, water-based beverages in Australia, notably a fall in per capita volume sales of SSBs and an increase in volume sales of water. Both trends are consistent with obesity prevention strategies.
Keywords: Keywords: sugar-sweetened beverages; soft drinks; sales; trends; added sugar Keywords: sugar-sweetened beverages; soft drinks; sales; trends; added sugar

Since their inception the Australian Dietary Guidelines have recommended limiting the intake of refined or added sugars, the early public health concerns relating primarily to the risk for dental decay and the potential for nutrient dilution [1,2,3]. Although added sugars were initially seen as relatively benign in relation to cardiometabolic risk, recent observational studies have shown associations between intake of sugar-sweetened beverages (SSBs), the major source of added sugars in many western diets, and weight gain, type 2 diabetes, hypertension, cardiovascular disease and all-cause mortality [4,5,6,7,8,9]. Some caution is required in interpreting these associations as high consumption of SSBs tends to cluster with tobacco smoking, low physical activity and poor dietary quality raising the possibility that these drinks serve as a marker for unhealthy lifestyles [8]. Nevertheless, the consistency of the associations between SSBs and weight gain have resulted in a focus on lowering intakes of SSBs as an obesity prevention strategy in the United States, Australia and elsewhere [10,11]. The recommendation for their restriction in national diets is relatively uncontroversial as most SSBs are nutrient-poor with no known health benefits beyond hydration.
Consumption of SSBs is now in decline in several countries. In the United States, Nationwide Food Consumption Surveys and the National Health and Nutritional Examination Surveys (NHANES) have enabled analyses of trends in intake of SSBs over time. After a four-decade climb in the consumption of these drinks, which corresponded with an increase in rates of obesity, intake of sugar-sweetened drinks began to fall in the early 2000s [12]. Using NHANES survey data, between 2003 and 2014 the percentage of US adults and children consuming SSBs on the day of the survey declined, as did the percentage of dietary energy from these beverages [13].
In Australia, a comparison of national dietary survey data collected in 2011–2012 with that from 1995 showed a fall in the percentage of the population consuming SSBs, a fall in the percentage of dietary energy from these drinks, and a fall in the percentage of dietary energy from added sugars in the diets of adults and children [14]. These data are consistent with trend analyses of volume sales of non-alcoholic, water-based beverages in Australia which showed declining sales of SSBs since 1997 [15,16]. The objective of the current study is to update the trend analysis to include the years 2012 to 2018, thereby providing data on volume sales of SSBs and other water-based drinks over a 22-year period.

For the purposes of this study, water-based beverages were defined as beverages that were ready to drink from their packaging and were predominantly water-based. Beverage categories included carbonated soft drinks, energy drinks, sports drinks, mixers, iced teas, sparkling waters and still waters. In contrast to previous studies in this series, fruit juices, sweetened milk-based beverages, such as chocolate milk, and kombucha were also included. Cordial, frozen drinks, syrup-based carbonated soft drinks and tap water were excluded from the analysis as data for these beverages were not available within the datasets used. Beverages were divided into sugar-sweetened and non-sugar-sweetened beverages. Non-sugar-sweetened beverages included all diet varieties, as well as plain and unflavoured mineral waters and still waters. For the purposes of this analysis kombuchas were considered to be non-sugar-sweetened, although not all brands on the Australian market are eligible for a low sugar claim. Alcoholic beverages and pre-mixed alcoholic beverages were excluded from this analysis, and there was no consideration of tea and coffee. This work is an extension of previous Australian research which relied on volume sales data gathered by AC Nielsen [16]. That dataset has been discontinued so a new dataset was sourced from IRI Australia, a market research company servicing the consumer packaged goods industry, and used in conjunction with the AC Nielsen data. The purchasing data sourced from IRI Australia are reflective of annual grocery and convenience store volume sales of water-based beverages nationally and were provided for 2009–2018. The IRI Australia dataset covers the majority of the grocery segment but only 65% of convenience stores nationally, so volumes were adjusted to estimate the full purchasing data in this segment.
To test the compatibility of the two datasets, data from the overlapping years, 2009 to 2011, for identical segments, were mapped. The inflation factor for each segment was determined by taking the AC Nielsen volume and dividing it by the IRI Australia volume for each of the three years individually. An average adjustment factor was determined and then applied across all segments in the IRI Australia dataset, thereby adjusting volume sales to match the previously supplied data from AC Nielsen for the period 1997–2011 (which were used in the first two studies in this series). In this case, the adjustment factor was 1.54. This adjustment factor takes into account the fact that the IRI Australia dataset does not contain information on all convenience volume sales, plus an estimate of foodservice, vending and dining purchases, as per the previous report [16]. It should be noted that all segments reported lower volume sales in the IRI Australia dataset compared to the AC Nielson dataset: for example, before adjustment the total soft drink sales in the AC Nielson dataset in 2009 were 2,025,861 L and 1,296,303 L in the IRI Australia dataset. Following adjustment, the value in the IRI Australia dataset was 1,996,306 L (1,296,303 × 1.54 L). The AC Nielsen dataset did not contain information on fruit juices, sweetened milk-based beverages or kombucha, so these were excluded from this adjustment exercise. Unadjusted data for fruit juices, sugar-sweetened milk-based beverages and kombucha are presented for the period 2009 to 2018.
For the period where the datasets overlapped (2009–2011) the adjusted IRI Australia dataset was used for the 22-year trend analyses, rather than the AC Nielsen dataset. This also enabled a longer assessment of trends in volume sales of juice, juice drinks and sugar-sweetened milk-based beverages, which were only available in the IRI Australia Dataset, and therefore are presented as figures from 2009 to 2018 only.

Using this market research data for drinks, sugar contribution from sugar-sweetened water-based beverages to the national diet declined from 9.02 kg/person to 6.35 kg/person over the period 1997 to 2018 (Figure 4). Over the same period, per capita sugar contribution from carbonated soft drinks declined from 8.41 kg/person in 1997 to 4.95 kg/person in 2018, or a decrease of 0.17 kg/person per year (Figure 4). These data do not reflect consumption data as no consideration has been given to unconsumed beverages and waste in the current study or to sex and age differences in SSB consumption.

Major, long-term shifts are occurring in the market for non-alcoholic, water-based beverages in Australia, notably a fall in per capita volume sales of SSBs and an increase in volume sales of water. Both trends are consistent with public health nutrition strategies for obesity prevention and suggest that the downward trend in the percentage of dietary energy from added sugars in the Australian diet may be continuing.

This analysis was funded by an unrestricted grant from The Australian Beverages Council Ltd. The grant funders had no input into the data analysis or interpretation, or the decision to publish this work.

This analysis was funded by an unrestricted grant from The Australian Beverages Council Ltd. The funders had no role in the design of the study; in the collection, analyses, or interpretation of data; in the writing of the manuscript, or in the decision to publish the results. 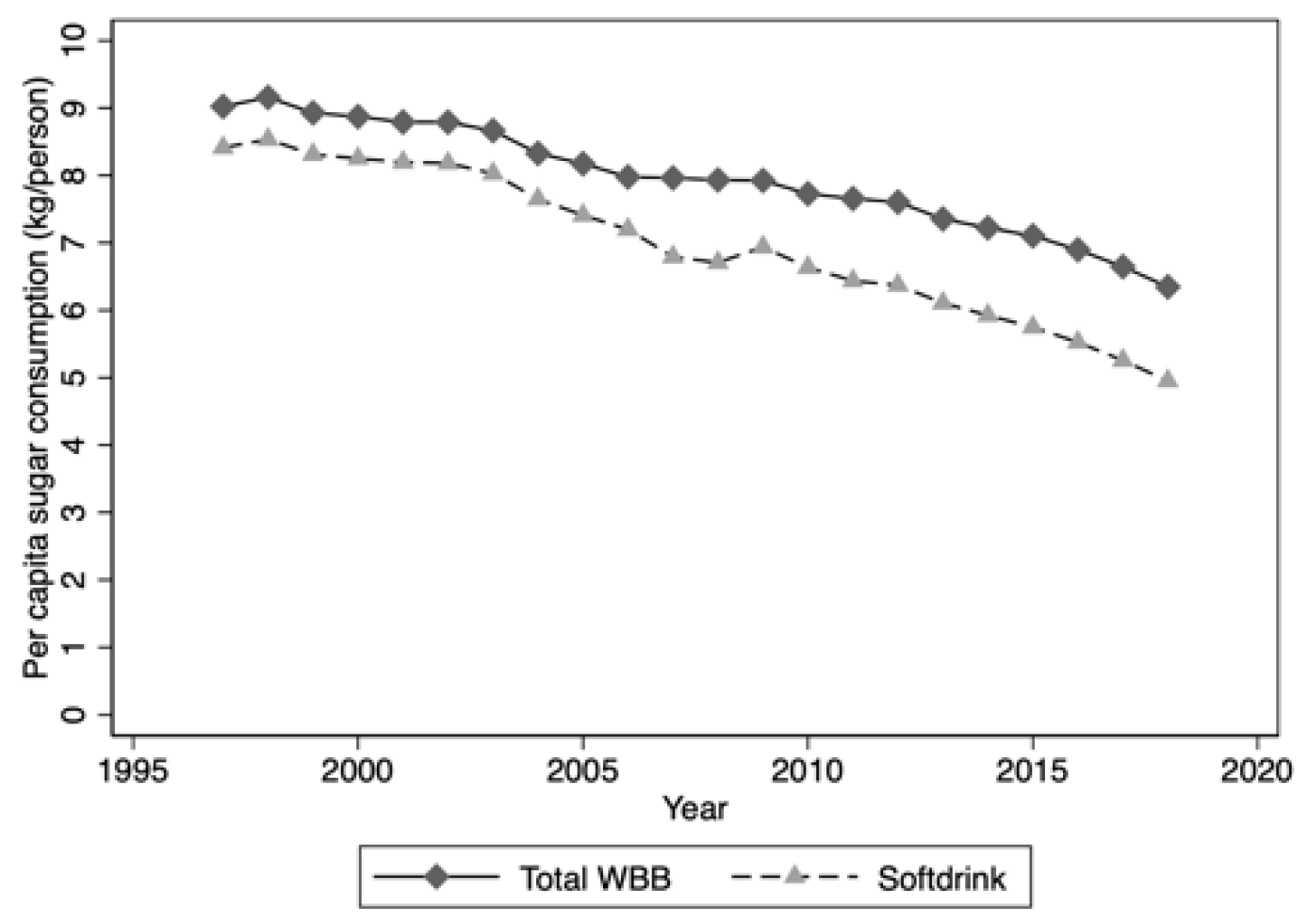