Comment on: “A Systematic Review of Organic Versus Conventional Food Consumption: Is There a Measurable Benefit on Human Health? Nutrients 2020, 12, 7”
Previous Article in Journal

The global school-based student health survey (GSHS) is a collaborative surveillance project between WHO, USA CDC, and respective countries. It was designed to measure and assess the behavioral risk factors and protective factors among school adolescents. The details of the survey can be found on the GSHS website (https://www.who.int/ncds/surveillance/gshs/en/). In short, the survey used a two-stage probability sampling method to recruit participants. In the first stage, schools were selected. In the selected schools, classrooms with students aged 12–18 were randomly selected at the second stage. All the students in the selected school classrooms were all invited to participate in the study regardless of age. In each country, ethical approval of GSHS was obtained from both a national government (the Ministry of Health or Education) and an institutional review board or ethics committee. Informed consent was obtained from the students, parents, and/or schools. Data were weighted for non-response and the survey design.
In the current study, publically available data from 64 countries were used. We retrieved the data from the WHO website. The surveys were conducted between 2007 and 2016. For each country, we selected nationally representative data. If the nationally representative data were not available, regional data were used.

We used food insecurity as an indicator for socioeconomic status. It was assessed by the question “During the past 30 days, how often did you go hungry because there was not enough food in your home? (1) Never; (2) rarely/sometimes; (3) most of the time/always”. Physical activity was categorized as sufficient or in sufficient based on whether the participants engaged in >5 days of at least 60 min physical activity in a week. Smoking (yes/no) was defined as the use of any form of tobacco on at least one day in the past 30 days. The frequency of fruit and vegetable intake during the past 30 days was assessed. Fast food consumption was assessed by the question “During the past 7 days, on how many days did you eat food from a fast food restaurant?”. In the analysis, the consumptions were recoded into times/day (fruit and vegetable) or days/week (fast food). Students were asked about the number of days with physical activity of at least 60 min during the past 7 days. Sufficient physical activity was defined as engaged in ≥5 days of at least 60 min of physical activity in a week. Body weight and height were self-reported. BMI was calculated and used to define nutritional status (underweight, normal, overweight, and obese) using the International Obesity Task Force (IOTF) criteria [11,12].

The descriptive statistics (e.g., mean and proportion) were calculated using svy mean or svy proportion in Stata to take into account the complex study design. The association between soft drink consumption and aggressive behavior was assessed using multivariable logistic regression in each survey with svy command in Stata. Soft drink consumption (times/day) was treated as a continuous variable in the multivariable logistic regression model. The model adjusted for age, gender, smoking, sufficient physical activity, food insecurity, and fast-food, fruit, and vegetable consumption. In all the analyses, for each covariate with a missing value we assigned a specific group to the variable other than excluding the participants or conducted multiple missing imputations.
To combine the estimates each country, the random effect meta-analysis method was used. Results were visually presented in a forest plot. Heterogeneity between groups was tested by Cochran’s Q tests. Subgroup meta-analysis was conducted by region, study level soft drink consumption and prevalence of aggressive behavior (by tertiles).
Furthermore, unweighted individual data were used to assess the association between soft drink consumption and aggressive behavior. In these analyses, soft drink consumption was treated as a categorical variable. A set of multivariable logistic regression models were used: Model 1 adjusted for age and gender; Model 2 further adjusted for smoking, alcohol drinking, sufficient physical activity (yes or no), intake of fruit and vegetable (times/day); Model 3 further adjusted for BMI status. To test the interaction between soft drink consumption with gender, physical activity, BMI status, and smoking, we put the product term of them in the multivariable logistic model and excluded those with missing values.
All the analyses were conducted using Stata 16 (Stata Corporation, College Station, TX, USA). Statistical significance was considered when p-value < 0.05 (two sided level-of-significance).

The main strength of our study is the large number of participants (n = 263,890) and the comprehensive methods of collecting data through a well-designed survey aiming to pinpoint on the possible correlation between lifestyle factors and health conditions. In addition, the study represents global dimension of behaviors, including 64 different countries with different food cultures, life style, and habits, encompassing five WHO regions (i.e., African region, Eastern Mediterranean, Region of Americas, South East Asia Region, and Western Pacific Region). The consistent findings of the relationship between soft drink consumption and aggressive behavior in most of the countries is less likely due to chance or biased by unmeasured confounding factors. The main limitation of the study is its cross-sectional study design and a lack of quantitative measures of soft drink consumption other than the frequency of intake. Furthermore, unmeasured residual confounding variables, such as socioeconomic status and parenting style, could potentially contribute to the relationship between soft drink consumption and aggressive behavior. 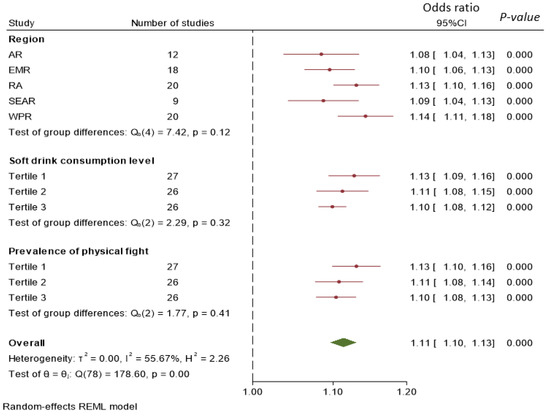 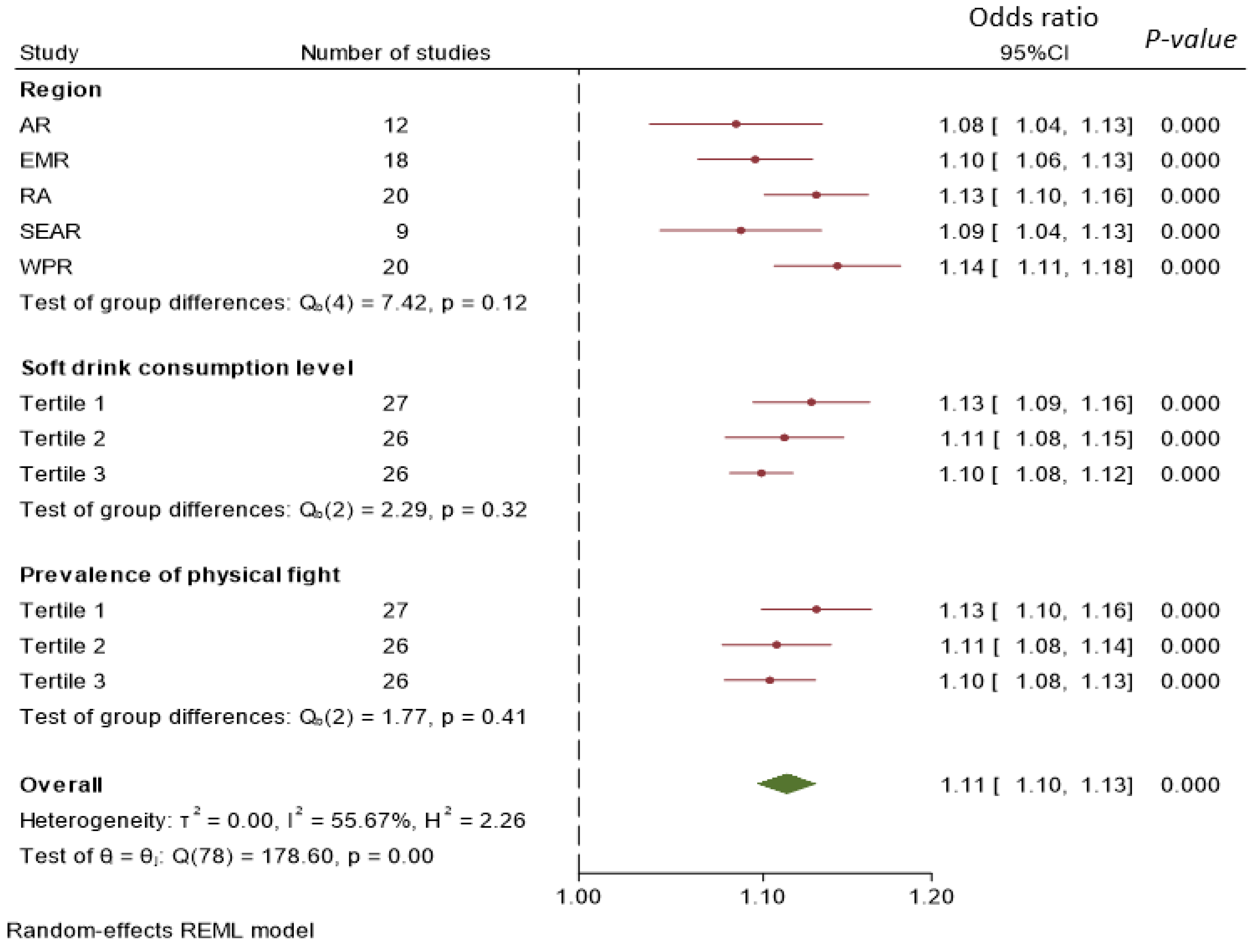