Acute lung injury is a common and severe pulmonary complication of critical illness caused by multiple factors, such as pneumonia, sepsis, shock, and respiratory bacteria or viruses infection [1]. Under physiological conditions, an intracellular homeostasis and a normal function of the lungs are maintained by the host defense systems, including mucus layer and immune response. Mucus layer, which is mainly consisted of secreted mucins, including MUC5AC and MUC5B, is the first defense line that prevents the contact of host cells with lumen contents, such as chemicals, toxins, and pathogens [2]. The dysfunction of mucus is associated with bacteria invasion, which in turn activates immune response, infiltration of macrophage, and the secretion of pro-inflammatory cytokines, such as tumor necrosis factor-α (TNF-α), interleukin-1β (IL-1β), and interferon-γ (IFN-γ), leading to decline of lung function and the manifestation of tissue damage [3,4].
An increased level of lipopolysaccharides (LPS), a cell wall component of Gram-negative bacteria, has been observed in the plasma and lung tissues of clinical patients and experimental animals. Consistently, a decreased LPS level is associated with a positive treatment outcome and a better prognosis, indicating an important role of LPS in the development of lung diseases. A series of pathogen recognition receptors (PRRs), such as Toll-like receptors (TLR), RIG-I-like receptors (RLR), protease-activated receptors (PAR), Nod-like receptors (NLR), C-type lectin receptors, have been reported to sense the pathogens in contact with the airway epithelium and activate host response [5]. Several lines of evidence indicates that LPS can be recognized by TLR4, and induces the accumulation of myeloid differentiation factor 88 (MYD88), which ultimately leads to the activation of nuclear factor κB (NF-κB)—a critical transcriptional factor implicated in producing of pro-inflammatory cytokines [6]. The nucleotide-binding domain-like receptor protein 3 (NLRP3) inflammasome is a major intracellular multiprotein complex of the innate immune system, which is composed of a NOD-like receptor, NLRP3 protein, apoptosis-associated speck-like protein (ASC) and procaspase1 [7]. NLRP3 inflammasome has been reported to play an essential role in the inflammation responses during acute lung injury [8,9]. Consistently, NLRP3-deficient mice are resistant to bacteria-induced lethality [9,10,11], suggesting an important regulator of lung diseases [12].
In addition to inflammatory responses, the host cells have multiple signaling pathways, whose activation is associated with cell survival in response to various stimuli. The nuclear factor erythroid-2 related factor 2 (NRF2) is a transcriptional factor implicated in inflammation- and oxidative stress-related diseases [13]. Activation of NRF2 upregulates down-stream targets, such as heme oxygenase 1 (HO1), NAD(P)H quinone dehydrogenase 1 (NQO1), and glutathione s-transferase α 4 (GSTA4) [14], to reduce antioxidative damage and promotes detoxification in multiple pulmonary diseases [15,16]. Deletion of NRF2 is associated with high susceptibility to respiratory bacterial infection [17].
Despite enormous advances in treating lung injuries, therapeutic options with high efficacy and less side effect are imperative, considering its high morbidity and mortality all over the world [18]. Amino acids, such as glutamine, arginine, and glycine, have attracted more and more attention due to various bioactivities, such as anti-inflammatory and anti-oxidative effects, in the lung and other tissues [19,20,21,22]. Our recent study has showed that glycine pretreatment effectively alleviated LPS-induced lung injury by inhibiting the inflammation and apoptosis of alveolar cells [23]. Nevertheless, the underlying mechanism still remains unclear. The objective of the present study was to test the hypothesis that glycine supplementation attenuated LPS-induced acute lung injury by regulating NLRP3 inflammasome and NRF2 signaling.

Lung tissues fixed in 4% formaldehyde were dehydrated, embedded in paraffin, sectioned, and stained with alcian blue solution (blue) and nuclear fast red solution (red) according to manufacturer’s instructions (Burlingame, USA). Sections from each mouse were visualized by a blinded observer and pictured using a light microscope equipped with a computer-assisted morphometric system.

Total RNA was extracted from the lung tissues using a TRIzol kit according to the instructions. The cDNA was obtained by reverse transcription of total RNA, which was carried out by a FastQuant RT Kit (with gDNase). RNA concentration and value of OD260/280 were measured using the Nanodrop P330 (Implen, Germany). The integrity of total RNA with an OD260/280 value of 1.8–2.0 was assessed by 1% agarose gel electrophoresis before performing qPCR experiments. qRT-PCR was performed by the SYBR green mix and specific primers for target genes with the ABI-Prism 7500 Sequence Detection System (Applied Biosystems) according to the instructions of manufacturer. The primer sequences used in the present study are listed in Table 1. Gapdh was used as an internal control. The 2−ΔΔCT method was used to determine the fold changes of mRNA levels with the Microsoft Excel software.

Compared with the controls, LPS exposure led to reduced airway mucin at protein level as shown by alcian blue staining, which was remarkably restored by glycine (Figure 1A). qRT-PCR analysis showed that mice in the LPS treatment group had significant downregulation of Muc5ac and Muc5b at the mRNA level in the lung tissues, as compared with the controls (Figure 1B,C). However, glycine supplementation significantly increased (p < 0.05) the mRNA levels of Muc5ac and Muc5b, as compared with those of mice in the LPS treatment group (Figure 1B,C).

Western blotting results showed that LPS treatment led to increased (p < 0.05) phosphorylation of P65, without affecting that of TLR4 and MYD88 at protein level (Figure 3). LPS-induced activation of P65 was significantly suppressed by glycine pretreatment. Of note, protein levels of TLR4 and MYD88 in the lung tissues of mice treated with aerosolized LPS plus glycine were lower (p < 0.05) than that of mice in the control or LPS treatment group (Figure 3A–C).

Western blotting results showed that LPS treatment increased (p < 0.05) the protein levels of NLRP3, ASC, and cleaved caspase1—a downstream target of NLRP3—and decreased the protein level of procaspase1 in comparison to the controls, indicating the activation of the NLRP3 inflammasome (Figure 4). This effect of LPS was remarkably prevented (p < 0.05) by glycine pretreatment.

Compared with the controls, LPS treatment resulted in decreased (p < 0.05) protein abundance of NRF2, and down-stream targets, such as HO1, NQO1, and GSTA4, which were abolished by glycine (Figure 5A–E). qRT-PCR results showed that Nrf2 gene expression was down-regulated in response to LPS exposure, along with downstream targets, such as Ho1, Nqo1, and Gsta4. However, these effects of LPS were attenuated (p < 0.05) by glycine supplementation (Figure 5F–I).

Western blotting results indicated that LPS exposure led to the decreased protein abundance of HSP40 and HSP70, which were reversed (p < 0.05) by glycine administration (Figure 6A–C). qRT-PCR results showed that mRNA levels of Hsp40 and Hsp70 were reduced by LPS treatment, as compared with that of controls, which were significantly prevented by glycine supplementation (p < 0.05) (Figure 6D,E).

3.7. Autophagy was not Involved in the Beneficial Effect of Glycine on LPS-Induced Acute Lung Injury

As shown by the Western blotting results, the inhalation of aerosolized LPS had no effect on abundance of protein involved in autophagy, such as P62, ATG5, LC3, and Beclin1 (Figure 7). Furthermore, pre-treatment with glycine did not affect autophagic proteins expression.

In conclusion, we found that glycine administration ameliorated aerosolized LPS-induced acute lung injury, as shown by increased mucin, decreased protein level of pro-inflammatory cytokines. This beneficial effect of glycine was associated with the modulation of the NLRP3 inflammasome and NRF2 signaling. Our findings provide a novel nutritional strategy for acute lung injury by providing glycine to animals. It should be noted that well-defined studies on efficacy and safety are required prior to its application in humans. 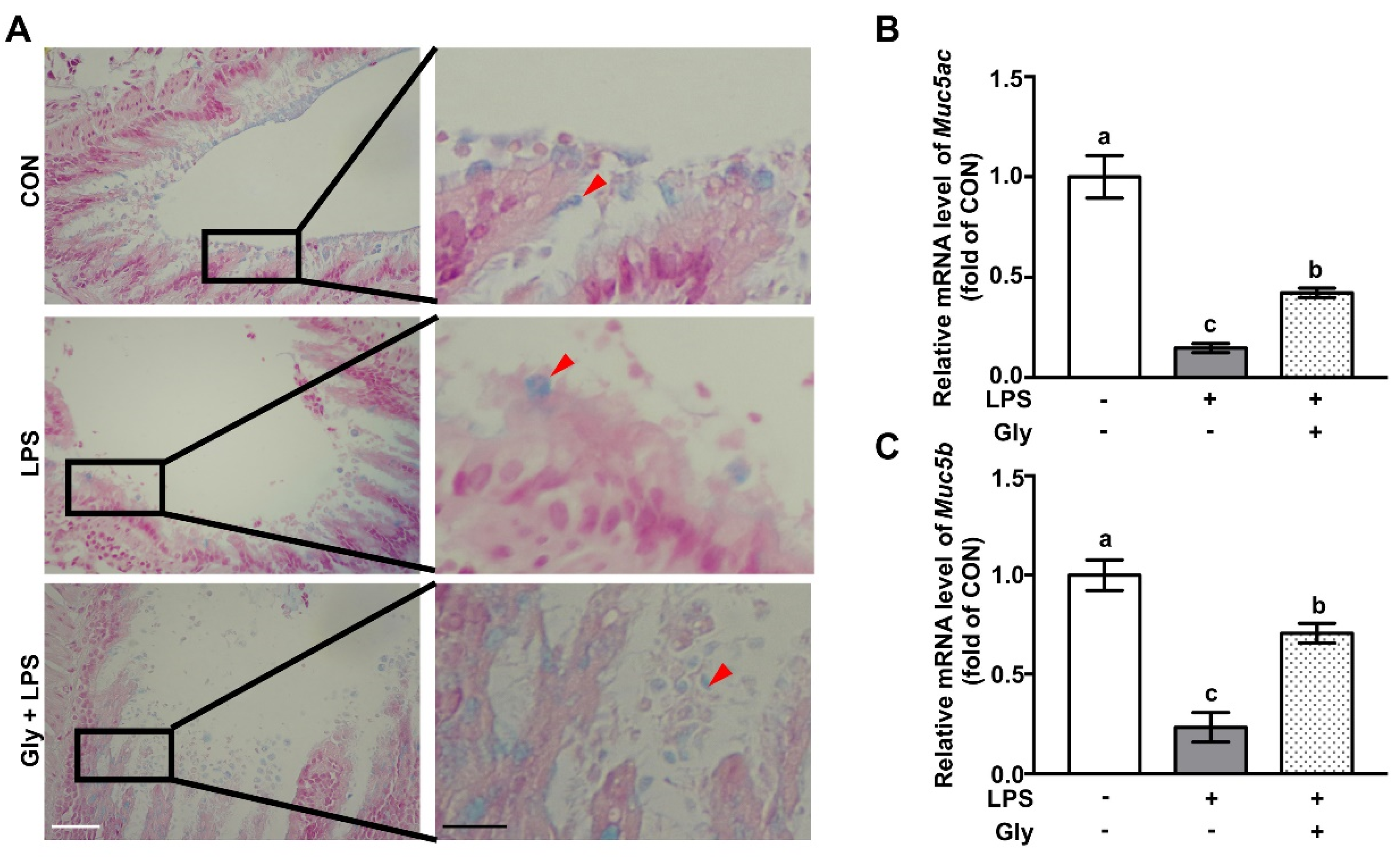 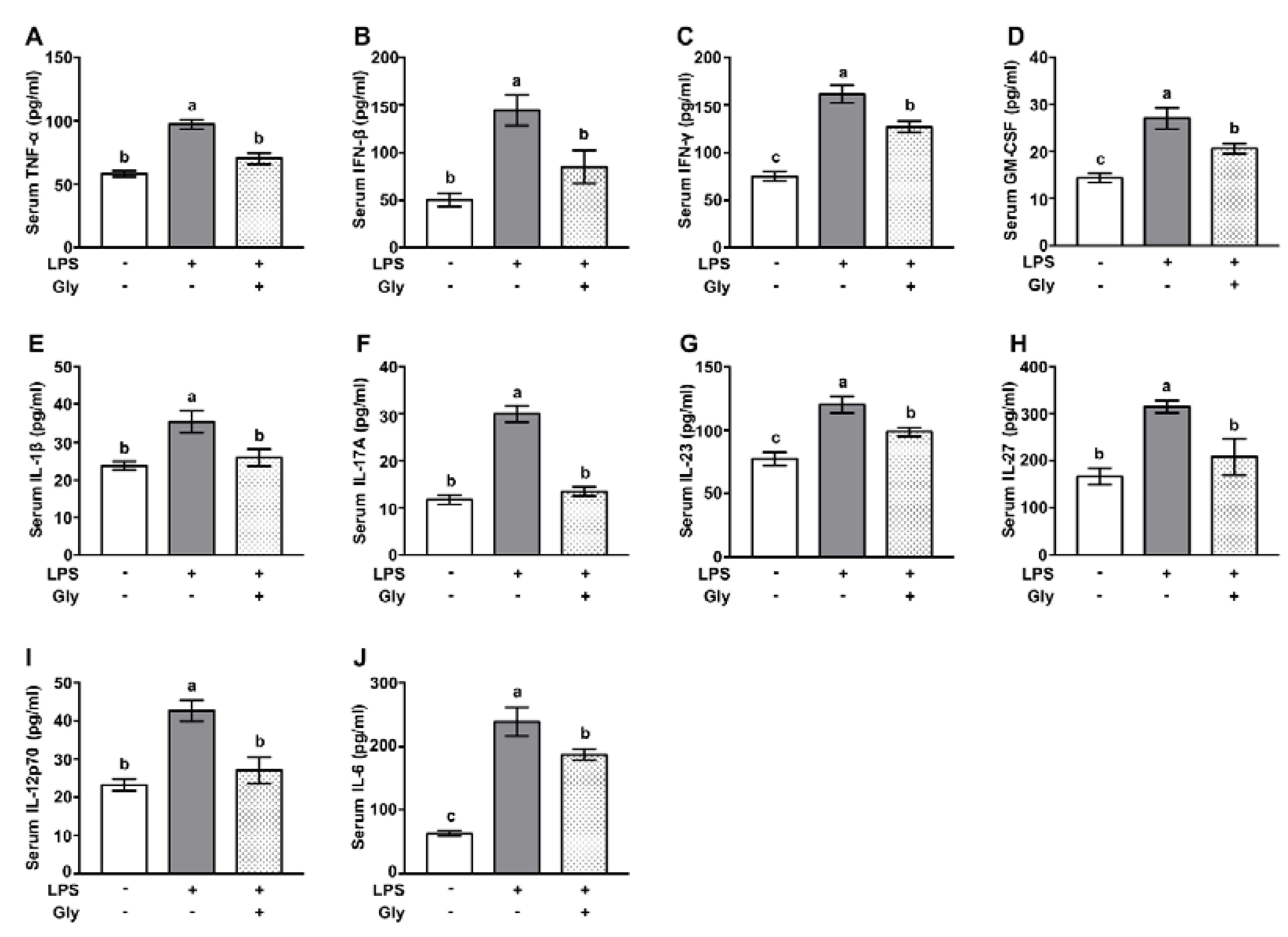 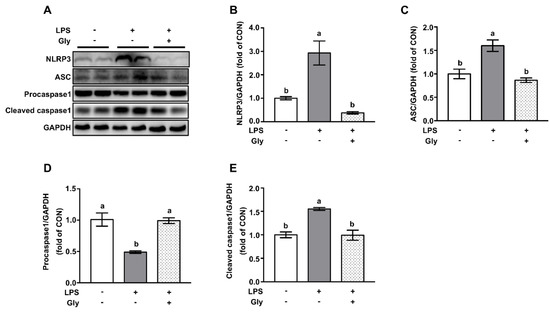 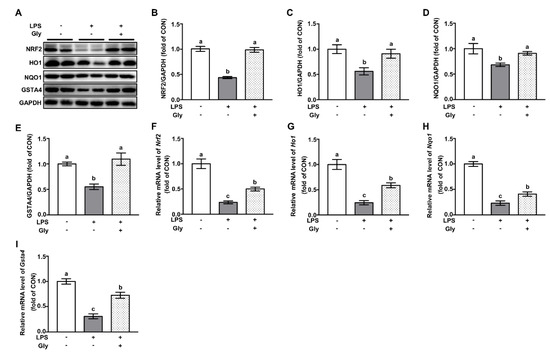 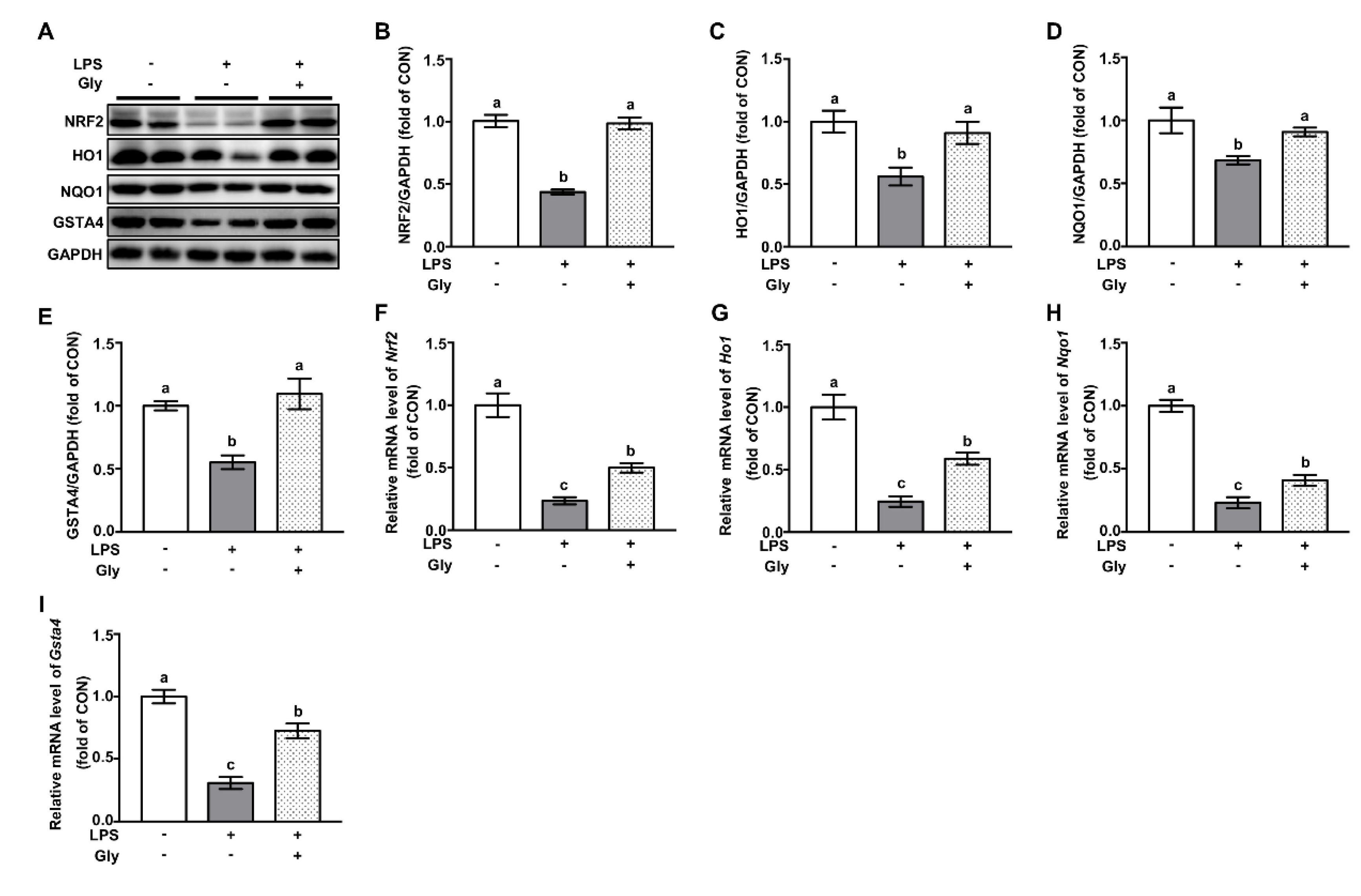 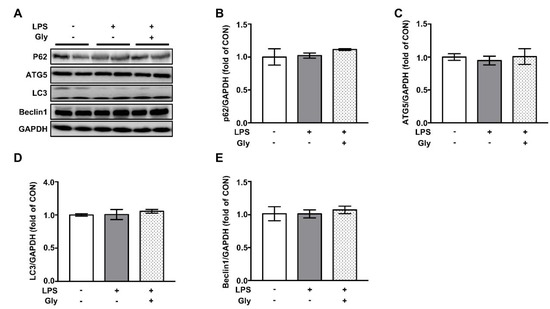 Table 1. Primer sequences used in Real-time PCR.
Table 1. Primer sequences used in Real-time PCR.
© 2020 by the authors. Licensee MDPI, Basel, Switzerland. This article is an open access article distributed under the terms and conditions of the Creative Commons Attribution (CC BY) license (http://creativecommons.org/licenses/by/4.0/).
We use cookies on our website to ensure you get the best experience. Read more about our cookies here.
Accept
We have just recently launched a new version of our website. Help us to further improve by taking part in this short 5 minute survey here. here.
Never show this again