What Serum Sodium Concentration Is Suggestive for Underhydration in Geriatric Patients?

Dehydration is a concern among aging populations and can result in hospitalization and other adverse outcomes. There is a need to establish simple measures that can help in detecting low-intake dehydration (underhydration) in geriatric patients. The predictive performance of sodium, urea, glucose, and potassium to discriminate between patients with and without underhydration was evaluated using receiver-operating characteristic (ROC) curve analysis of data collected during the cross-sectional study of patients admitted to the geriatric ward. A total of 358 participants, for whom osmolarity could be calculated with the Khajuria and Krahn equation, were recruited to the study. Impending underhydration (osmolarity > 295 mmol/L) was diagnosed in 58.4% of cases. Serum sodium, urea, fasting glucose, and potassium (individual components of the equation) were significantly higher in dehydrated participants. The largest ROC area of 0.88 was obtained for sodium, and the value 140 mMol/L was found as the best cut-off value, with the highest sensitivity (0.80; 95% CI: 0.74–0.86) and specificity (0.83; 95% CI: 0.75–0.88) for prediction of underhydration. The ROC areas of urea, glucose, and potassium were significantly lower. Serum sodium equal to 140 mmol/L or higher appeared to be suggestive of impending underhydration in geriatric patients. This could be considered as the first-step screening procedure for detecting underhydration in older adults in general practice, especially when limited resources restrict the possibility of more in-depth biochemical assessments. View Full-Text
Keywords: electrolyte; osmolyte; screening; prediction of underhydration; calculated osmolarity; older people; receiver operating curve analysis; water intake electrolyte; osmolyte; screening; prediction of underhydration; calculated osmolarity; older people; receiver operating curve analysis; water intake
►▼ Show Figures 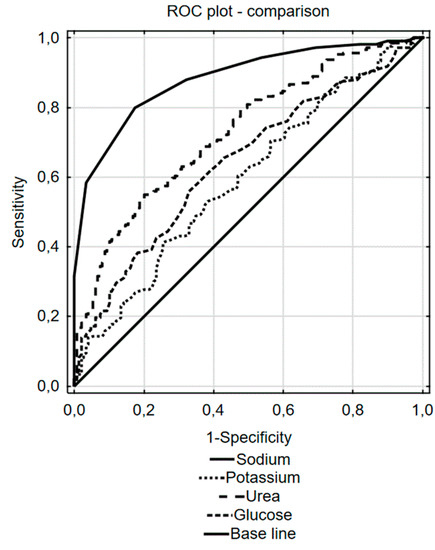 
Wojszel, Zyta B. 2020. "What Serum Sodium Concentration Is Suggestive for Underhydration in Geriatric Patients?" Nutrients 12, no. 2: 496.