Use of Sports Supplements in Competitive Handball Players: Sex and Competitive Level Differences

What Model of Nutrition Can Be Recommended to People Ending Their Professional Sports Career? An Analysis of the Mediterranean Diet and the CRON Diet in the Context of Former Athletes

Athletes who retire from their sporting career face an increase in body weight, leading to overweight or obesity. Simultaneously, a significant number of these athletes meet the criteria of metabolic syndrome. The available literature does not offer clearly defined standards of nutrition for the discussed group of people. In this situation, it seems advisable to develop different standards of dietary behavior typical of athletes finishing their sports careers. For this purpose, the study analyzed two types of diets: the Mediterranean diet and the Calorie Restriction with Optimal Nutrition (CRON) diet based on significant calorie restrictions. Both diets seem to meet the requirements of this group of people.
Keywords: sport nutrition; elderly athletes sport nutrition; elderly athletes

Former athletes are often people in whom the habit of practicing sports has been instilled throughout years of training. This leads to a situation that such people continue to practice the same sport discipline or another sport discipline for many more years because it results from their internal need. Other athletes, after finishing their sports careers, return to recreational sports activity only after many years in order to improve their health and well-being. There are also people who quit sports completely and do not even engage in them as a part of everyday recreation [1].
Athletes who decide to retire from sports often face an increase in body weight leading to overweight or obesity. Arliani et al. [2] observed the problem of body weight among 78% of former American football players (overweight), whereas 4% of them were classified as obese. Researchers assessed that the average increase in the Body Mass Index of these people was 2.4 kg/m2 since they finished their professional career [2]. This phenomenon is most often caused by continuing to consume meal portions of the same size as during periods of intense training, by lowering the energy expenditure associated with ceasing to train frequently, and by reducing the basal metabolic rate (BMR) [3,4].
Excess body weight in the group of former athletes is observed more often among people who practiced speed–strength sports than those who practiced oxygen endurance sports [5,6,7]. Excessive body weight and adipose tissue are related to the nature of the trained discipline [8,9,10]. The analysis conducted by Borchers et al. [11] indicated that obesity affects 21% of former American football players. Kujala et al. [12] observed excess body weight among former athletes who trained in strength disciplines in comparison to endurance athletes (long-distance runners, cyclists).
Components of metabolic syndrome are often observed in athletes that retire from professional sports careers. These include, among others, abnormal glycemia levels, loss of muscle mass that is replaced by adipose tissue, and the presence of nonalcoholic fatty liver disease (NAFLD) [13].
Studies conducted in the general population showed that the occurrence of cardiovascular disorders, being a part of the metabolic syndrome, increases the risk of death by 24% [14]. It is also indicated that women suffering from metabolic syndrome have a significantly higher risk of muscle weakness, also associated with cardiovascular risk factors [15]. This indicates that all activities in each group at risk of this problem are extremely important and should be implemented immediately.
The risk of metabolic syndrome in the group of former athletes was the subject of a study by Emami et al. [16]. In their work, the researchers assessed the risk of obesity, insulin resistance, and other features within metabolic syndrome in the groups of former athletes, other physically active people, and those who do not practice any sports. The study group was divided into three subgroups: active athletes (n = 34), retired athletes (n = 30), and non-sports people (n = 30). The obtained results indicated that abandonment of regular athletic exercise and weight cycling by power sports athletes leads to adverse outcomes as higher mean values of weight, body mass index, diastolic blood pressure, LDL-C, insulin, homeostatic model assessment (HOMA) insulin resistance (IR), and HOMA β-cell function (HOMA-%β-cell) [16].
In the athletes group, myocardial hypertrophy was observed using electrocardiography and ultrasound imaging of the heart; myocardial hypertrophy is characteristic for this period, but the heart often returns to its original state when the sports career ends [17]. The available literature indicates that regular physical activity reduces the risk of cardiovascular incidences in former athletes. Regular exercise reduces the death ratio caused by cardiovascular problems by about 31% among total physically active elderly people [18].
Sirotin and colleagues [19] showed, in a group of 122 men aged 50-59, that former athletes who practiced dynamic sports in the past are characterized by a younger biological age compared to non-training people and those athletes who practiced sports of other intensities [19].
Simultaneously, it should be mentioned that excessive weight gain is less frequent among people who maintain proper nutrition and are physically active despite ending their sports careers [6]. Endurance athletes show a lower risk of excessive body weight [6,8]. This situation may be related to the previously increased energy expenditure due to training loads. Additionally, such people are characterized by a much higher total caloric demand than people who are less active or who train in strength disciplines [20]. Maintaining proper body weight and adipose tissue content is also observed among former marathon runners; however, malnutrition is prevalent in this group during sports activity [21].
Many former athletes remain physically active after their careers [6,22]. Studies in Finland and Estonia show that more than half of former athletes regularly engage in sports in their leisure time and participate in amateur competitions. Simultaneously, such persons more often maintain normal body weight in the later years of life [23,24].
Publicly available specialist literature does not indicate clearly defined standards of nutrition dedicated to people ending their professional sports career. The Mediterranean diet and a diet based on severe caloric restrictions (Calorie Restriction with Optimal Nutrition (CRON) diet) seem to be important diets in the context of former athletes [25].

4. Application of the Mediterranean and the CRON Diet in a Group of Former Athletes

The available literature does not provide much research on the analyzed topic. As our studies have shown [13,120], reducing the Mediterranean diet used by former athletes has a positive effect on anthropometric parameters, which include reduction of the skin thickness and fat folds above the iliac crest, improvement of the nutritional status (increased arm circumference and muscle mass), and a reduction in waist circumference and body fat [120]. Another study conducted by our research team [64] with former athletes showed that the use of a diet based on approximate 500 kcal restrictions led to an increase in the content of fatty acids exhibiting anti-inflammatory character. Additionally, this diet type contributed to a significant reduction of pro-inflammatory fatty acid derivatives [64]. Another study by Hołowko et al. showed that the use of the Mediterranean diet and the CRON diet in former athletes led to an improvement in lipid and carbohydrate metabolism [25]. In this study, both calorie restriction diets, CR I (reducing daily caloric intake by 20% of total daily energy expenditure (TDEE)) and CR II (reducing daily caloric intake by 30% of TDEE), when adjusted to the caloric needs of a participant, helped to improve BMI. In former athletes who applied the reducing daily caloric intake by 30% of TDEE and lowered their body mass by 1.5–2.5 kg, 2.5–3.0 kg, and over 3.0 kg, a significant improvement in lipids (total cholesterol, LDL, and triglycerides), insulin level, and homeostatic model assessment insulin resistance (HOMA-IR) was observed. Both diets were also effective in improving the levels of leptin and adiponectin in obese former athletes [25]. Similar results were also obtained by Gawęcka et al. [121]. Interestingly, the use of caloric restrictions of the order of -800 kcal by former athletes also leads to the activation of SIRT1 responsible for the life extension process [120]. In terms of SIRT5, the result was reversed—the Mediterranean diet had a bigger influence on the increase of the expression of this sirtuin. The activation of the FoxO1 transcription factor was observed more prominently after the introduction of the Mediterranean diet.
Based on our last research study, the Mediterranean diet has a more positive influence in terms of anthropometric changes: higher body mass reduction, a decrease of skin-fat fold thickness above the hip bone, decreased waist circumference and fat tissue content, and an improvement in the nutritional status calculated through arm muscle circumference and muscle mass content [120].
As both diets have their positive sides to improving and maintaining health, the individual approach and specific needs of former athletes may outweigh the choice of one of them. This personalization of the dietary intervention may be the best way to better dietary adjustment, depending on the former athletes’ needs. More research is needed to tailor diets to the needs of former athletes, but our experience so far shows that diets that are effective in the general population (as detailed above) are also useful in maintaining normal metabolic parameters in former athletes [13,25,64,120]. Moreover, due to long-term exercise in the past, these diets also exert additional therapeutic effects on former athletes. This approach seems reasonable and research on larger groups may give even more statistically significant results.

Both the Mediterranean and CRON diets seem to be appropriate for athletes ending their sports careers. The available literature shows that both analyzed diets contribute to the improvement in the results of biochemical tests in a comparable way, especially lipid and carbohydrate metabolism. Moreover, the Mediterranean diet rich in omega-3 fatty acids has an anti-inflammatory character, strengthens the processes of extinguishing inflammation, and improves the anthropometric parameters in a more positive way. The CRON diet significantly contributes to the activation of SIRT1, which is associated with the process of extending life. 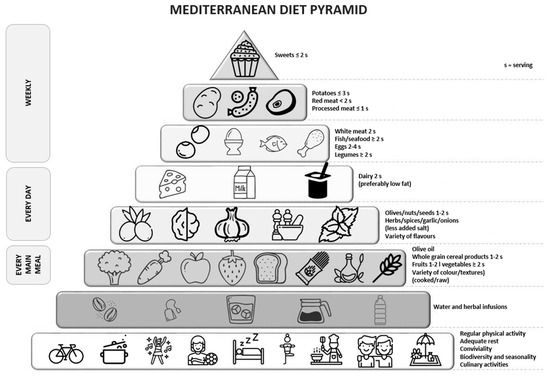