Effects of Nutritional Interventions in the Control of Musculoskeletal Pain: An Integrative Review

What Do Polish Parents and Caregivers Think of Dietary Supplements for Children Aged 3–12?

The quality of diet in childhood has an enormous influence on the condition of the human body in adulthood. Providing optimal quantities of macro- and micro-elements is possible when following the principles of good nutrition. However, one can observe the growing importance of dietary supplements in the day-to-day diet of children as well as adults [1,2,3]. FDA defines dietary supplements as products (other than tobacco) intended to supplement the diet which bear or contain one or more of the dietary ingredients [4]. The European Commission defines them as foodstuffs the purpose of which is to supplement the normal diet and which are concentrated sources of nutrients or other substances with a nutritional or physiological effect [4,5]. This relatively new to the market type of products is growing in importance. An enormous variety of dietary supplements results in a growing interest in analyzing their intake (reasons, knowledge, attitudes, and practices) [6,7,8,9]. About 4.4% or even more of the supplement market is aimed at children [10]. Until now, DS intake among children was not a subject of a lot of research [11,12,13,14,15] unlike pregnant women, sportsmen, dieticians, and pharmacists [9,16,17,18,19].
It is essential from the social standpoint to get to know the volume of dietary supplements consumption and the type of products that are chosen by children’s caregivers. It is important because supplements available on the market may be mislabeled, others adulterated and some may even lack the bioactive ingredients promised by the producer’s declaration [20,21]. There may also be deviations between particular product series [22]. In the course of the study conducted by the National Institute for Public Health and the Environment in the Netherlands, some products were identified as having higher or lower quantities of vitamin D in comparison to the information included on the packaging of the products and which were intended for adults as well as children [23]. A similar case was described by Arakai [24], who concluded that the actual quantity of vitamin D in the recommended dose was 1000 times higher than the information on the product label indicated. It creates a threat of exceeding the upper level intake (UL) of this ingredient, which in the case of children, may lead to hypercalcaemia, hypercalciuria and kidney problems [25,26]. Children are a special group of potential recipients of supplements due to the fact that:
As mentioned previously, not much research has been conducted on the subject of children taking dietary supplements, as well as about the Polish population of children aged 3–12 in the context of the amounts and the types of dietary supplements taken by them. The research that has been conducted until now did not discuss the formulations of supplements taken by children, which is a crucial parameter vis-a-vis the variety of the supplement formulations available on the market (especially the formulations, which take the form of conventional sweets), preferences of children and their caregivers as well as adjusting the formulation to suit the consumption capabilities of the target groups. Additionally the paper aimed to define the attitudes of caregivers towards SDs and towards administering them to children aged 3–12. An analysis of the reasons for using DSs, expected benefits and awareness of health risks associated with administering DSs was conducted.

A questionnaire was created to test the knowledge, practice, and attitudes of parents with regard to dietary supplements and especially sweetening agents and labeling of these products. The sample of the study was limited to parents and caregivers of children from Wrocław (Poland) and its suburbs (population of 600,000). Between June and September of 2017, an online survey was advertised through a mailing list by school and preschool principals and forums for parents and caregivers of children. Information obtained from respondents was held in confidence. Hence, the survey did not ask for names or any other personal details. To guarantee questionnaire validity and reliability, a structured questionnaire was developed after careful review of the literature. Validation was conducted by pre-testing on a group of 10 parents and caregivers of children aged 3 to 12 (diverse in terms of age, education, wealth, and gender) to limit the risk related to the potential lack of understanding of questions by respondents and rejecting irrelevant statements.
The questionnaire intended for parents and caregivers of children was divided into 4 parts. The first part was devoted to questions concerning sociodemographic features related to age, gender, education, place of residence and material status of the respondents. The second part of the questionnaire was dedicated to questions that enabled us to characterize children. It asked questions related to their age, gender, health status, diet, allergies and food intolerances. The third part was devoted to the respondent’s knowledge of dietary supplements, their efficacy, possible threats; attitudes and behaviors. The last part of the questionnaire was intended only for the respondents who administer dietary supplements to their children and included questions referring to attitudes, and behaviors related to administering dietary supplements to children.

The sample size was measured using the Raosoft online calculator [8]. According to the Statistical Office in Wrocław as of 31 of December 2016, the number of children aged 3–12, living in Wrocław and Wrocław County, amounted to 75,146. In order to carry out the research, it was essential for at least 383 respondents to take part (a significant segment of the children’s population lives in families that have two or more children). However, for the sake of the calculations, data from the Statistical Office were used. The study sample (N = 383) was calculated on the assumption that the confidence level: 95%, margin of error: 5%.

The subjects of this study did not represent the population of the entire country. All of the data were self-reported, leading to the possibility that the respondents may have misreported some data. The studied group was predominantly female; because of that, an analysis of the influence of gender on particular parameters has not been carried out, as well as the study of the relationship between gender and specific attitudes or behaviors. The same rule was kept in case of a lack of analysis of education (85.55% higher) and place of residence (city 82.89%).

It was concluded that the caregivers misunderstood the term “dietary supplement”. Despite declaring that they do have general knowledge on the subject, less than 25% of the respondents knew that it is a type of food product. Almost 37% claimed that dietary supplements may have medicinal properties. The results showed that the caregivers knew or partly knew the recommendations of the National Food and Nutrition Institute. However, they did not adhere to them fully. The choice of DS was based on the recommendations of pharmacists and doctors, but they also looked for information online. It was concluded that the caregivers paid attention to the type of sweetening agent used in DS and that it was an important factor influencing their purchasing decisions. It was confirmed that parent’s age and gender influence their opinion (perception of SD) about dietary supplements, and parents who administer dietary supplements to children show a tendency to have more trust in this type of product than the people who do not do so. Individuals were not aware of the risks associated with dietary supplementation. There is also a real risk of children treating dietary supplements as sweets due to associating formulations of sweets with specific formulations of the dietary supplements currently available on the market. Considering the calorific value of such products (the content of sugars) they can be deemed unhealthy. They may also cause the caregivers to have a false impression that DSs take care of supplementing the deficiencies in the diet of a child. In reality, they may cause a deterioration of dental health and too high supply of carbohydrates. To conclude, results show that there is a need to improve parents’ knowledge on the subject of dietary supplements and the conditions of their use. 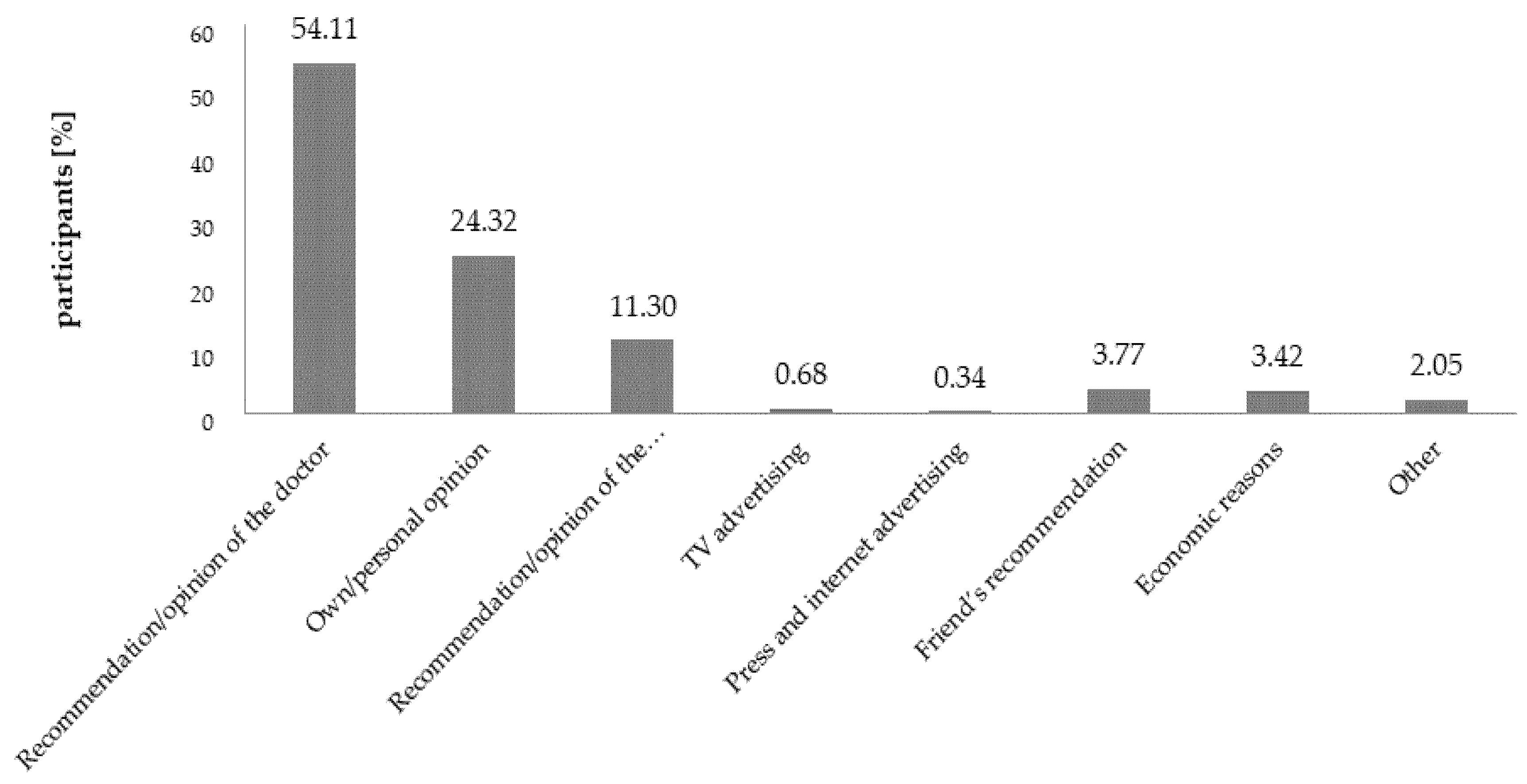 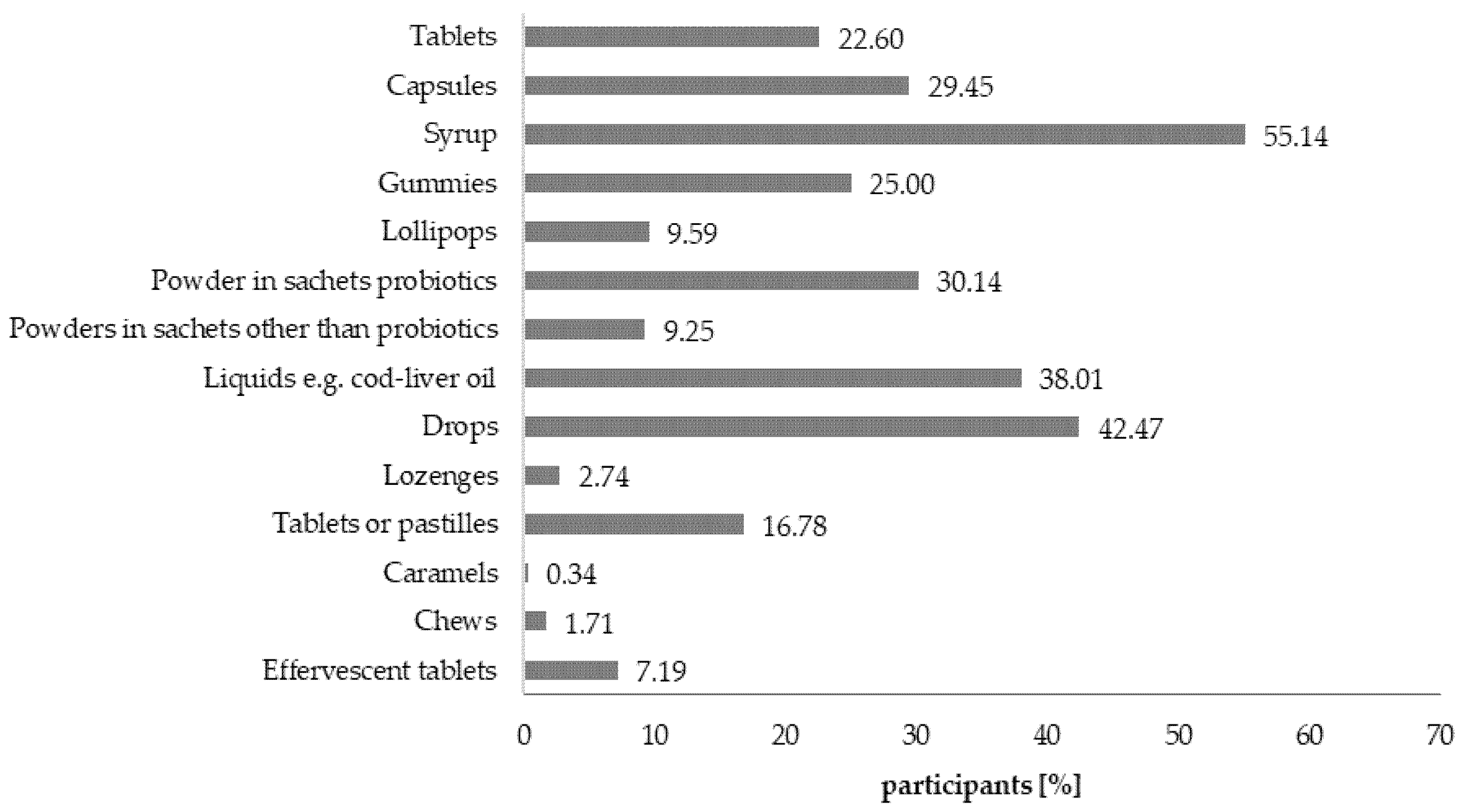 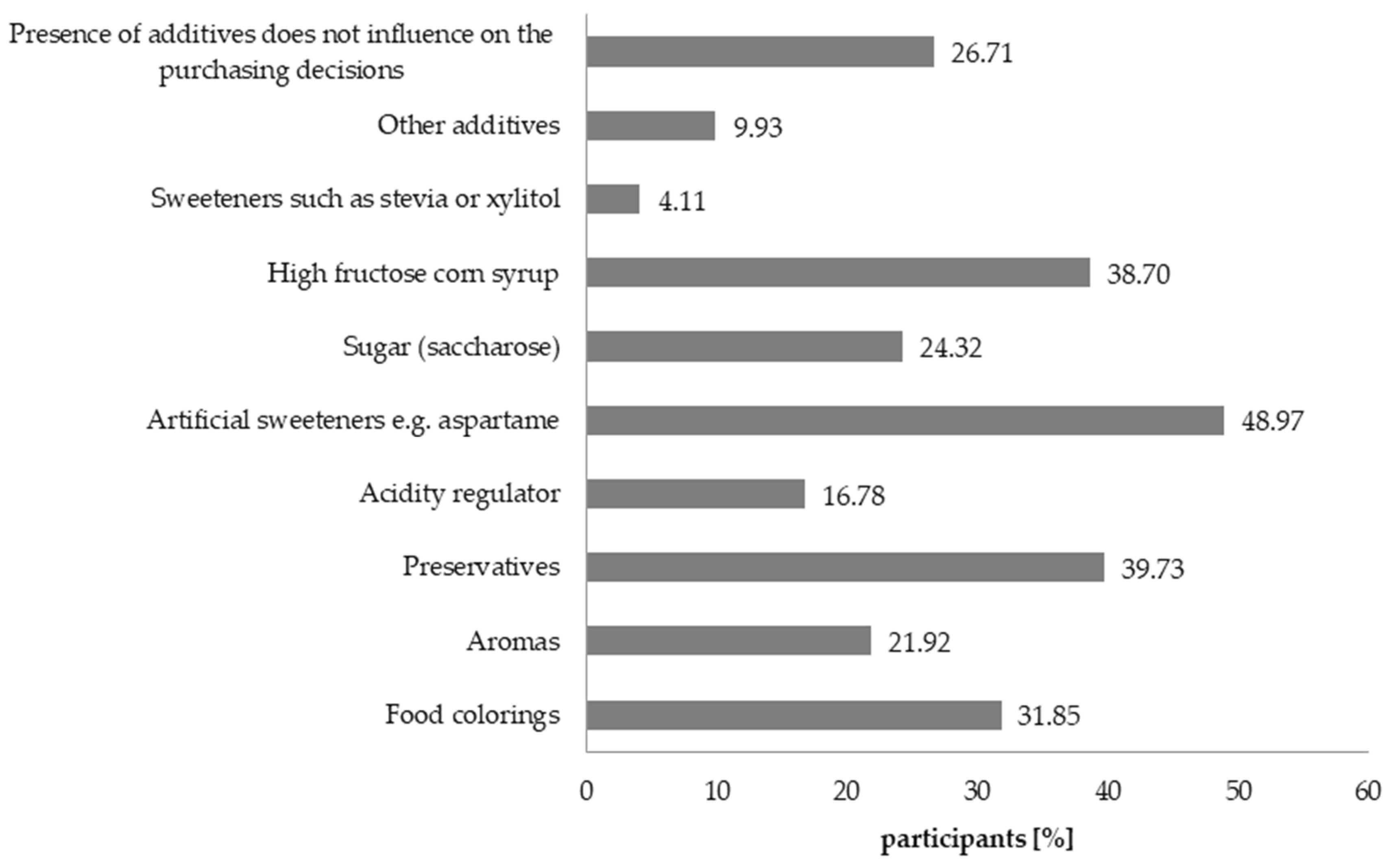