Effect of Increasing the Dietary Protein Content of Breakfast on Subjective Appetite, Short-Term Food Intake and Diet-Induced Thermogenesis in Children
Next Article in Special Issue

Elderly Perception of Distance to the Grocery Store as a Reason for Feeling Food Insecurity—Can Food Policy Limit This?
Previous Article in Journal

Dietary Quality Changes According to the Preceding Maximum Weight: A Longitudinal Analysis in the PREDIMED-Plus Randomized Trial
Previous Article in Special Issue

What Dimensions of Risk Perception are Associated with Avoidance of Buying Processed Foods with Warning Labels?

Preschool Healthy Food Policy Did Not Increase Percent of Food Wasted: Evidence from the Carolinas

:
This research evaluates the effects of a South Carolina (SC) policy, which changed the nutrition standards for foods served in early care and education (ECE) settings, on wasted food. A two-group pre-test/post-test evaluation was performed in ECE centers serving children age 3–5 from households with lower incomes in SC (n = 102 children from 34 centers, intervention) and North Carolina (NC; n = 99 children from 30 centers, comparison). Direct observation was performed to assess the quantity and kcal of food served and quantity and percent of food discarded, by food group and nutrient, enabling assessment of waste in the absence of intervention. Mixed-effects linear models were fit to estimate, by state, differences in change from baseline to post-implementation at the center level. Covariates were selected a priori, including center enrollment, racial composition, director educational attainment, years in operation, for-profit status, and Child and Adult Care Food Program (CACFP) participation. Waste of food was high across states and time points. The policy was not associated with a change in percent of food discarded in SC compared to NC in adjusted analyses.
Keywords:
food waste; early care and education; school nutrition standards; preschool; evaluation; policy

The data collection methods and sample have been described in detail elsewhere [20] and are briefly summarized here. The study included 34 ECE centers serving families with lower incomes in the Columbia, SC area, and 30 in the Raleigh, NC area.
Using the Diet Observation in Child Care (DOCC) [22] approach, trained data collectors visited each center before and after SC policy implementation, observing three children from one randomly selected classroom per center during one regular full day of care. Data collectors arrived prior to opening and stayed until the last child had left the center. They tracked all foods served, traded, discarded and remaining, for all meals and snacks. Data collectors received extensive training in use of the DOCC to visually assess food and beverage portions and were blinded to study aims. Pre-implementation data were collected for 102 children in SC and 90 in NC; and 9 months later, post-implementation data were collected for 99 children in SC and 78 in NC. Follow-up data was missing from four centers (three in NC and one in SC), with three centers having closed and the fourth declining to participate. Centers lost to follow-up were demographically similar to those that participated at both timepoints. Because no identifying information was collected about the children, the pre- and post-implementation samples did not necessarily include the same children.
Center directors also responded to questionnaires regarding center characteristics. As was previously documented, centers were similar across states on most criteria. However, compared to centers in NC, centers included at baseline in SC were on average larger (46 enrolled vs. 25), had a lower percentage of Hispanic children (1.4% vs. 4.8%), were less frequently for-profit (18% vs. 26%) and directors were more highly educated (39% more than 4-year college vs 7%).
The Institutional Review Boards of the University of South Carolina (#00014606) and Duke University Medical Center (#00033793) approved this study, both in 2012.

Nutritional composition of the diet data was analyzed using the Nutrition Data System for Research 2012 (NDSR) [23]. Findings were calculated per day at the center level, averaging across the three children in each center for each food, beverage, micronutrient and macronutrient. Waste was estimated both as the percentage of served that was not consumed, and the absolute difference between served and consumed. In a few instances, the quantity of food, beverage or nutrient recorded as consumed for a child exceeded the amount served to that child. These errors, likely attributable to non-recorded second helpings or food trades with peers, occurred in observations of 8 children across 5 centers (2% of observations). In these instances, we set served equal to consumed for the specific item for that child.
Means, standard deviations (SD), and proportions were calculated to summarize center characteristics. We subtracted consumed from served to derive estimates for quantities wasted.
To evaluate policy impact, unadjusted and adjusted mixed effects linear models were fit to estimate the difference, by state, in the change from baseline to post-policy implementation (difference-in-difference) in foods, beverages, micronutrients and macronutrients served and wasted (total quantity and as a percent of served) [24]. All models included center random effects and indicators for time, state, and an interaction between time and state (difference-in-difference estimator). Adjusted analysis controlled for the following fixed effect covariates, selected a priori [21]: number of three- to five-year-olds enrolled, proportion of children who are Black >50%, director educational attainment (more than high school or community college vs. some or all of 4-year college or graduate degree), years center has been in operation, profit status (for-profit vs. nonprofit), CACFP participation (yes vs. no). We used robust standard errors to account for clustering at the center level. Results are reported as predicted probabilities and marginal effects.
Analyses were conducted in Stata/IC version 14.1 (StataCorp LP, College Station, TX, USA) with a significance level of p < 0.05.

We first describe the foods discarded in the highest percentage in the absence of the policy (in SC before intervention and at both time points in NC). This information serves both to ground the policy impact analysis, and also to provide information useful for understanding food waste among young children in general. Next, we report on difference-in-difference in the amounts of food served between states before and after the policy, and finally, the difference-in-difference in the amounts discarded.

Figure 1 summarizes the most wasted items among the young children in the absence of the nutrition policy (pre-intervention SC combined with both time-points in NC). The category wasted in the greatest percentage (mean, SD) was vegetables not including fries (44%, SD = 28%). The next most wasted food categories were all beverages (22%, SD = 18%); fruit not including juice (22%, SD = 22%), and milk (21%, SD = 18%). Items with less than 3% waste included flavored milks, fries, sugar-sweetened beverages, and non-dairy milks. Because vegetables are high in nutrients, we found that preschoolers discarded 32% (SD = 23%) and 30% (SD = 20%), respectively, of the amount of vitamins A and C served to them.
The policy’s potential effect on food wastage results, in essence, from serving food in excess of willingness to consume. Accordingly, it is important to know how the policy affected the quantities of food served. Table 2 characterizes the shift in foods and beverages served from baseline to follow-up in the two states. Results were similar in direction, magnitude, and statistical significance in unadjusted and adjusted models; results discussed in the text below are from adjusted models. In the post-intervention period, compared to sites in NC, SC sites significantly increased their serving of vegetable protein, fruits not including juice, and grains; as well as calories and carbohydrates, after adjusting for covariates. For several other food groups and nutrients, significant changes were observed between the intervention or comparison groups across time, but the comparison of changes between the two states was not significant.
We next examined change over time in the percentage of served food that was wasted across the two states, controlling for the covariates (Table 3). Despite the serving changes observed in some categories, there were virtually no differences between the states in how discards changed over time. The one exception was milk: the intervention group discarded 6% more post-intervention, while milk discards were actually reduced by nearly 7% in the comparison group (difference-in-difference was 12.6%, p = 0.01). Supplementary Table S1 provides further context on the increased milk discards, indicating a shift in types of milk served before and after the policy. Initially, 59% of SC centers served whole and reduced fat (2%) milk (versus low fat (1%) and nonfat milk), while post-policy, that percentage dropped to 39%.

This research suggests that the ECE healthy food policy in SC was successful in increasing healthy food consumption without increasing overall waste. This study also highlights the foods most likely to be wasted in ECE. The study contributes to a small literature focused on the waste of food in young children and ways to address it. The waste of food carries high costs for feeding programs and households, among its damaging effects. There is a great need for more research to establish best practices for food waste reduction in ECE and other settings where young children spend time. Embedding this food waste study within a larger policy evaluation study highlights the potential tradeoffs, and the need for a systems perspective focusing on optimizing benefits across nutritional and food waste outcomes.

The authors declare no conflict of interest. The funders had no role in design of the study; in the collection, analyses, or interpretation of data; in the writing of the manuscript, or in the decision to publish the results. 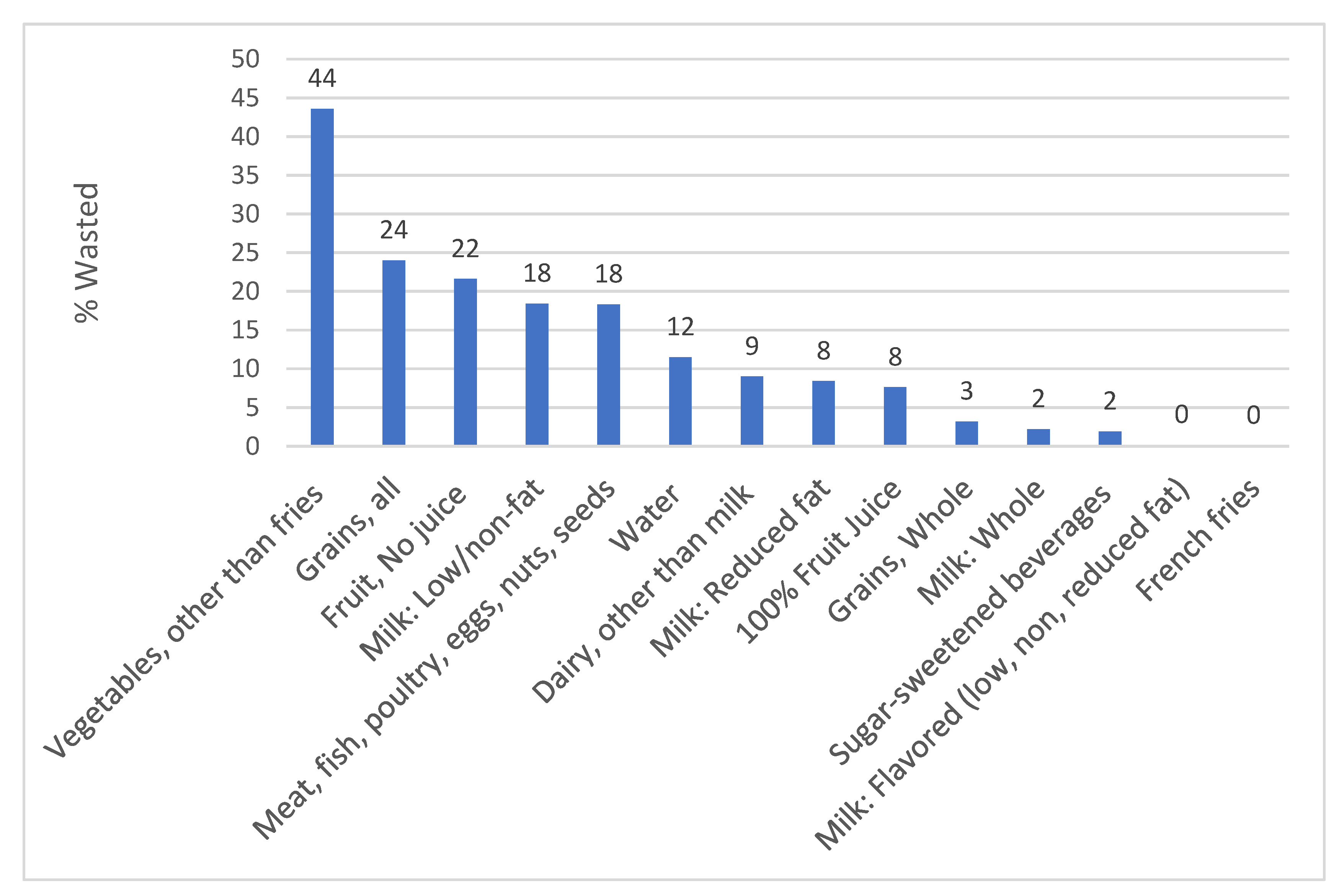