In Suk Choi
3 and

Hyperlipidemia is a major risk factor for the development of serious cardiovascular diseases such as myocardial infarction, stroke, and atherosclerosis, especially when accompanied by chronic diseases such as hypertension and diabetes [1]. In particular, high blood triacylglyceride (TG) levels due to intake of a high-fat diet can contribute to the progression of arteriosclerosis [2,3]. Accordingly, there has been substantial research focused on identifying or developing functional food ingredients to control or prevent hypertriglyceridemia by managing TG levels.
Moreover, accumulating evidence points to the important role of intestinal microflora as an environmental factor affecting obesity and related diseases, including hyperlipidemia. An increase in harmful intestinal bacteria activates inflammatory pathways that affect lipid metabolism, leading to the development of obesity-related diseases [4]. With recognition of specific patterns of intestinal microbial metabolism associated with obesity, there has been increased interest in the development of probiotics that can reduce TG levels and lipids in the body. For example, consumption of shakes containing Lactobacillus acidophilus, Bifidobacterium bifidum, and fructo-oligosaccharide resulted in a significant increase in HDL-cholesterol and a reduction in glycemia in elderly people with type 2 diabetes mellitus [5]. In addition, consumption of yogurt containing Lb. acidophilus and Bifidobacterium lactis caused a significant decrease in cholesterol in patients with hypercholesterolemia [6], and consumption of milk fermented with Lb. acidophilus 145 and Bifidobacterium longum BB536 reduced LDL-cholesterol levels [7]. Furthermore, research on various probiotics on improving blood lipids has been preceded [8]. These beneficial effects were directly attributed to the improved intestinal microbial environment from ingestion of probiotics.
Among the available probiotics, Lactobacillus plantarum Q180 (LPQ180) is a safe plant-derived lactic acid bacterium that has been isolated from the feces of adults, which has demonstrated the ability to reduce blood TG levels both in vitro and in vivo animal experiments [9,10]. LPQ180 was confirmed to inhibit adipocyte differentiation of 3T3-L1 cells in vitro due to the reduction of C/EBPα and PPARγ levels [11]. In vivo experiments confirmed that obese mice fed a high-fat diet and supplemented with the LPQ180 strain exhibited reduced fat cell uptake and size [12]. However, there have been no human intervention trials about LPQ180 conducted to date.
Based on the hypothesis that LPQ180 has a positive effect on lipid metabolism by improving intestinal microbiota composition and related metabolites, we conducted a double-blind, randomized, controlled trial to determine the effects of LPQ180 consumption postprandial lipid responses after oral lipid tolerance test (OLTT) using TNO fat challenge formula [13] in men and women over 20 years of age with a healthy and slightly higher fasting TG levels (<200 mg/dL). In addition, the effect on fecal environments was evaluated. These findings can provide a scientific basis for the development of LPQ180 as a functional ingredient to maintain healthy postprandial lipid metabolism.

Adults over the age of 20 who had blood TG levels less than 200 mg/dL were recruited to participate in this trial through posters and online advertising. All participants provided written consent and the protocol received approval from the Internal Review Board (IRB) of Ewha Woman’s University Mokdong Hospital (IRB No. EUMC 2016-06-040). This study was also registered on the International Clinical Trials Registry Platform of the WHO (ICTRP, No. KC T0002085). The exclusion criteria were as follows: Recommended Food Score (RFS) > 36 to exclude participants having healthy dietary habit [14,15]; body mass index (BMI) below 23 kg/m2 and over 35 kg/m2; regular intensity exercise (≥10 h/week); chronic smokers (≥20 cigarettes/day); alcoholism and those who consume 420 g alcohol per week; diagnosis of hyperlipidemia, diabetes, hypertension, liver disease, bowel disease, kidney disease, cardiovascular disease, cerebrovascular disease, pancreatitis, cancer, thyroid disease, dementia, Parkinson’s disease, depression, anorexia/bulimia, or multiple sclerosis; taking medication or herbal medicine at least two months before the first visit; taking any probiotics or prebiotics or sustained intake of dietary supplements that affect body fat lipid metabolism and bowel health within the previous month before the first visit; participation in another clinical research trial within three months before the first visit; and pregnant or lactating women

The study was designed as a randomized, double-blind, placebo-controlled, and parallel trial. The selected subjects ingested LPQ180 or placebo capsules daily for 12 weeks after a two-week run-in period. Seventy subjects who met the selection criteria were randomly assigned to the placebo or LPQ180 group by block randomization method (Figure 1).
The LPQ180 group (n = 35) received two 400 mg capsules containing 4.0 × 109 colony-forming units of LPQ180 per day. The placebo group (n = 35) took two capsules containing the same amount of maltodextrin, which did not contain any probiotic strains. Both products were obtained from CKD Bio Corp., Ltd. (Seoul, Korea). The quality of all products such as harmful microbial levels and heavy metal levels were also checked by CKD Bio Corp.

Blood collection was performed after fasting for 12 h, and postprandial blood collection was performed at 0, 6, and 12 weeks after ingestion of a 500-mL TNO fat challenge formula (palm oil 60 g, dextrose 83.5 g, protein powder 20 g, and 320 mL water) along with the study capsules. Blood was collected using EDTA Vacutainer blood collection tubes (Becton Dickinson, Franklin Lakes, NJ, USA) and stored in a 1.5-mL Eppendorf tube at −80 °C. Plasma and red blood cells were separated from the blood by centrifugation (1500× g, 4 °C, 15 min). Chylomicrons were isolated by adding sodium chloride solution to the plasma [16].
The fecal samples were collected at Weeks 0 and 12 using commercial kit for stool sampling (Medi4you, Seoul, Korea). Participants sent stool samples with ice pack and immediately stored at −80 °C without any treatment until analysis.

Analysis of the biogenic amines was performed with reference to the method described by Saarinen [17] using a Shiseido SI-2 HPLC system (Kyoto, Japan) equipped with a fluorescence detector. Separation was carried out on a Cadenza 5CD-C18 (5 µm, 250 mm × 3 mm) column equipped with a Cadenza 5CD-C18 Guard Cartridge (5 µm, 5 mm × 2 mm; Imtakt USA, Portland, OR, USA). Total biogenic amines were defined as the sum of agmatine, methylamine, ethylamine, pyrrolidine, dimethylamine, propylamine, tryptamine, butylamine, 2-phenyl ethylamine, putrescine, cadaverine, histamine, tryamine, spermidine, and sperimine (Sigma Aldrich Corporation. Ltd., St. Louis, MO, USA). Heptylamine was used as the internal standard (IS).
The short chain fatty acids (SCFAs) in the feces were determined according to the method described by Costabile et al. [18]. Unbranched SCFAs, including acetic acid, propionic acid, butyric acid, and valeric acid, and branched SCFAs, including, iso-butyric acid and iso-valeric acid (Sigma Aldrich Corporation), were used as external standard solutions. The sum of the branched and unbranched SCFAs was defined as the total SCFA content. 2-Ethyl butyric acid was used as the internal standard. The SCFAs were analyzed using GC with a flame ionization detector (FID) on an Agilent 6890N system (Agilent Technologies) equipped with a DB-FATWAX UI column (0.25 µm, 30 m × 0.25 mm; Agilent Technologies).
The indoles and phenols were analyzed according to the methods described by Flickinger et al. [19] and Park et al. [20]. GC-FID was performed essentially as described for the SCFA analysis, with the exception of the use of a DB-17 column (0.25 µm, 30 m × 0.25 mm; Agilent Technologies). Indole, phenol, p-cresol, and skatole were used as external standards in the range of 30–500 µmol/L, and 4-isopropylphenol (Sigma Aldrich Corporation) was used as the internal standard.

The sample size was estimated to be 35 subjects per group to provide an 80% power of demonstrating a significant difference in TG levels, based on similar previous studies and a drop-out rate of 20% [23,24,25]. Cross-group comparisons of all randomized subjects were performed for intent of treatment (ITT) analysis. Correlation analysis was performed with a per-protocol (PP) analysis including only those who completed the study. Based on the normality assessment, the data were log transformed to obtain a normal distribution prior to analysis. Student’s t-test was used to compare the characteristics of the subjects at baseline for continuous variables and to compare microbial communities between treatment groups, whereas categorical variables were analyzed by the chi-square test. In all functional assessments, a linear mixed-effect model was used with group, time, and group-by-time interactions (group×time) as fixed-effect variables for analyzing changes at baseline from Weeks 0 to 12, and as random-effects variables to analyze the difference between groups according to the intake period. The area under the curve (AUC) was calculated using the trapezoidal rule for postprandial lipid and related metabolic parameters at both 0 and 12 weeks. Pearson’s correlation coefficients were used to determine the correlations among variables. Statistical analysis was performed using SAS version 9.4 (SAS Institute Inc., Cary, NC, USA). When a p-value was less than 0.05, the difference was considered to be statistically significant for all parameters.

Four subjects in the placebo group and four subjects in the LPQ180 group dropped out eight weeks into the trial, leaving a total of 62 subjects who completed the trial (Figure 1). One participant allocated in placebo group was excluded because of taking obesity medication and others withdrew their consents. The characteristics of the selected 70 participants are summarized in Table 1. The sex ratio of the subjects was the same in both groups. The mean age of the subjects was 48.3 ± 1.5 years, the mean TG level was 133.8 ± 7.5 mg/dL, and the mean total cholesterol (TC) level was 201.5 ± 24.1 mg/dL. There were no significant differences in baseline characteristics between the placebo and LPQ180 groups.

Cross-group comparisons in the change in total intestinal microbial metabolites for 12 weeks (Table 3) showed that levels of total indole and phenol significantly reduced after 12 weeks of LPQ180 capsule ingestion compared to those of the placebo group (p = 0.019). However, there were no significant differences in the other metabolites between the two groups. Changes in individual values of metabolites are shown in Table S1, and indole (p = 0.064) tended to decrease and p-cresol (p = 0.021) significantly decreased in the feces of the LPQ180 group compared to those of the placebo group.

3.5. Correlation between the Baseline Intestinal Microbiome and Changes of Blood Lipid-Related Markers and Metabolites

This work was supported by “Food Functionality Evaluation program” under the Ministry of Agriculture, Food and Rural Affairs, and partly by Korea Food Research Institute (G0090100-08) and “Bio & Medical Technology Development Program” of the Natl. Research Foundation (NRF) funded by the Ministry of Science & ICT (NRF- 2012M3A9C4048761). Additional analysis was carried out with the support of Chong Kun Dang BIO (CKD Bio). 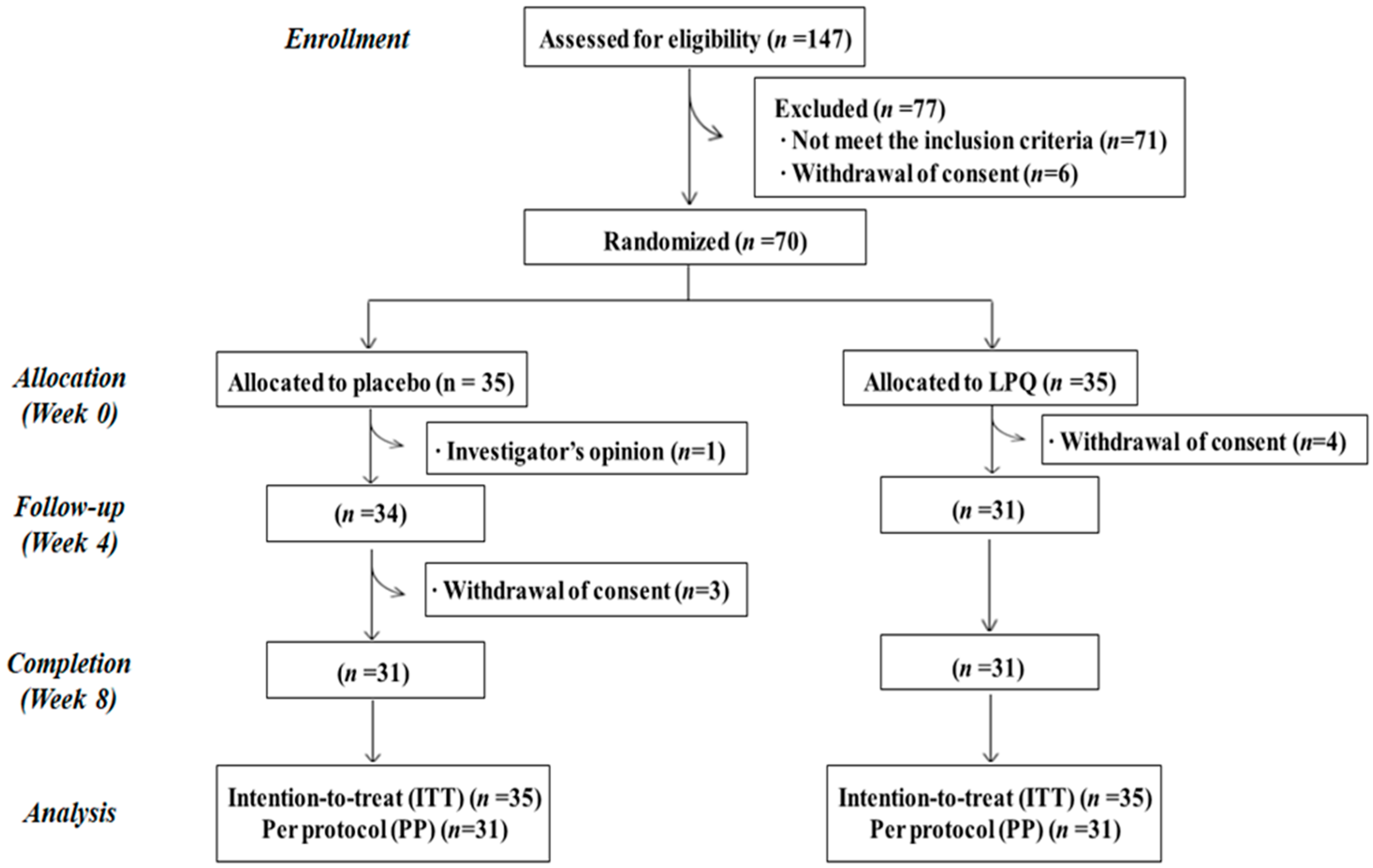 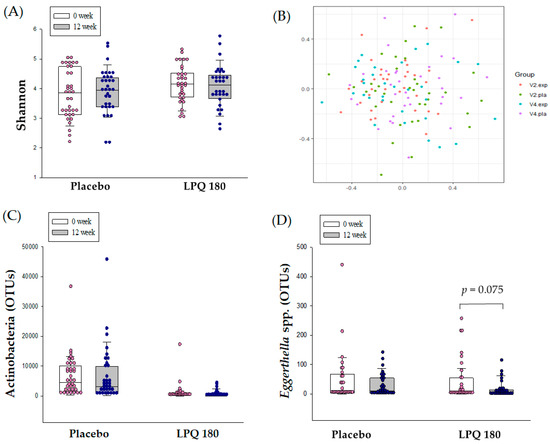