Article
Efficacy and Safety of Resveratrol in Type 1 Diabetes Patients: A Two-Month Preliminary Exploratory Trial
by

:
Resveratrol has been reported to be beneficial against diabetes complications. The objective of this study was to evaluate the efficacy of resveratrol in decreasing hyperglycemia in patients with type 1 diabetes (T1D) by a preliminary investigation designed as an exploratory clinical trial. Thirteen patients with T1D from both the sexes participated in this trial. All patients received resveratrol in 500 mg capsules, twice daily for 60 days. Bodyweight, fasting blood sugar (FBS), hemoglobin A1c (HbA1c), insulin, homeostasis model of assessment for insulin resistance (HOMA-IR), homeostasis model of assessment for β-cell function (HOMA-β), and markers of liver and kidney damage, inflammation, and oxidative stress were measured before the intervention, at 30 days and at 60 days. Resveratrol supplementation for 60 days significantly decreased FBS and HbA1c in comparison with the baseline values. Resveratrol treatment also resulted in a decrease in the level of a marker for oxidative stress, malondialdehyde, and an increase in total antioxidant capacity in T1D patients. Insulin, HOMA-IR, HOMA-β, and markers of liver and kidney function and inflammation were not significantly affected by resveratrol treatment. Overall, the results showed that 60 days of resveratrol supplementation exerted strong antidiabetic and antioxidant effects in patients with T1D.
Keywords:
resveratrol; type 1 diabetes; hyperglycemia; hemoglobin A1c; oxidative stress

Type I Diabetes (T1D) is an autoimmune disease-derived disorder wherein there is a lack of a sufficient level of insulin to regulate blood glucose, which leads to hyperglycemia and subsequent organ damage [1]. In T1D, dysfunctional pancreatic β-cells contribute to an absolute deficiency of insulin and debilitating heterogeneous diabetic complications. The incidence of T1D is increasing at an alarmingly high rate around the globe. It has been estimated that 387 million people are living with diabetes mellitus worldwide. T1D is found in approximately 5% to 10% of total diabetes mellitus patients [2]. Diabetes-induced abnormalities are the main cause of death in those who are diagnosed with T1D [1]. T1D has also been recognized to occur in children and adolescents more frequently. The recommended mainstay therapy for T1D involving intensive or conventional insulin treatment coupled with continuous blood glucose monitoring is still plagued by unfavorable side effects [3]. The effectiveness of insulin therapy may often prove counterproductive as it can also lead to hypoglycemic episodes [3]. Treatment-induced hypoglycemia is known to negatively impact the patient’s adherence to insulin treatment [4,5]. On the other hand, it is also recognized that T1D patients may not always achieve targeted glycemic levels, even with intensive insulin treatment [4]. Abnormal weight gain and higher cardiovascular risk are some of the complications associated with recommended insulin treatment. This subsequently affects the benefits of glycemic regulation in T1D patients [5,6,7].
There is an unmet need to effectively manage hyperglycemia in conjunction with the use of insulin in T1D patients [3,8]. Insulin treatment alone may not be sufficient to avoid all diabetes-related complications [3,8]. In this regard, new adjunctive therapies may prove beneficial for T1D patients in terms of achieving normal glycemic levels and preventing macro- and microvascular disease [3]. Better glycemic status and prevention of weight gain and hypoglycemia with reduced insulin dosage are the desirable outcomes expected from a new add-on therapy for T1D [9,10]. In view of the drawbacks of current therapy, potential add-on therapies have been explored for managing T1D. Incidentally, glucagon-like peptide 1 analogs/receptor agonist and sodium–glucose cotransporter 2 inhibitors are currently being investigated extensively as they are useful in controlling hyperglycemia in Type 2 Diabetes (T2D) patients. There have been some promising initial results in T1D patients with these drugs as well, suggesting the potential for the addition of new therapies to the current insulin-based therapy in T1D patients. However, it should be noted that these agents have not been approved for clinical use yet in T1D patients. In this context, food-derived compounds have also been shown to have beneficial effects in T1D. One such compound is resveratrol, which is found predominantly in grapes, peanuts, and berries. Preclinical studies have shown strong antihyperglycemic effects in different animal models of T1D. However, there is no evidence yet about the efficacy of resveratrol in providing benefits to patients with T1D.
Accordingly, we sought to examine this possibility by conducting an exploratory trial investigating the safety and efficacy of resveratrol in T1D patients.

This preliminary study was designed as an exploratory, single-center, two-month investigation to evaluate the efficacy and safety of resveratrol in T1D patients. The study was approved by the Medical Ethics Committee (IR.BPUMS.REC.1396.3.) of Bushehr University of Medical Sciences, Iran. The study also complied with the Declaration of Helsinki and the International Conference on Harmonization/Good Clinical Practice Guidelines. The project is registered with the Clinical Trial Registry of Iran (registration no: IRCT201710108129N11). Informed consent was obtained from each patient at the time of enrolment and continued as a process throughout the investigation. In addition, the patients had free medical care and consultation during the study period, especially in the case of any adverse reaction or complications. Thirteen patients with T1D, aged between 12 and 45 years from both sexes, who were on oral antidiabetic treatment and insulin injection or combination therapy for a minimum of 6 months were included in the study (Figure 1). The patients were repeatedly visiting the Endocrine Clinic of the Persian Gulf Tropical Medicine Research Center, Bushehr, Iran, for routine medical examination at the time of the recruitment.

Patients with T1D, aged between 12 and 45 years and with good peripheral veins were included. Patients on insulin treatment were included as long as they were on stable doses and the dosage was not changed during the course of the study.

Subjects on any antioxidant therapy, such as vitamin supplements, having an allergy to grapes, green tea, and peanuts, and patients with T2D, severe heart disease, hepatic disease, renal dysfunction, and smoking habits were excluded.

At the second and third visits, participants returned unused capsule bottles, and the study compliance was assessed by counting the remaining capsules from the bottle. Every participant was asked to complete a questionnaire during each visit to monitor the type of foods consumed during the study, particularly to confirm that they did not have food products that may have contained resveratrol. Moreover, at each visit, blood collection, weight measurement, and general medical examinations were done.

All participants received 500 mg, twice daily (a total of 1 g/day), of resveratrol capsules (99% pure, Biotivia, Bioceuticals International, SRL, Verona, Italy) for a period of two months. All patients were allowed to continue their existing antidiabetic medications, including insulin injection, during the course of the study. Oral hypoglycemic agents and insulin were not modified during the course of the study. The participants who completed the study were on antidiabetic medications as follows (drug and number of patients on a particular drug): Insulin (13), Novarapid + Lantus + Insulin (5), Insulin + Metformin (1), Insulin + Glibenclamide (1), and Lotion Insulin (1).

Height was measured with a stadiometer, and weight using a standard weighing balance. Outer garments and shoes were removed before measurements were done. Body mass index (BMI) was calculated as weight in kilograms divided by the square of height in meters using the Global Database on BMI (World Health Organization, 2006).

The distribution of variables was determined using probability plots and the Shapiro–Wilk test. Data for HOMA-IR, HOMA-β, CRP, and insulin levels were log-transformed to obtain a Gaussian distribution. The anthropometric and biochemical parameters for patients with T1D that were assessed at baseline, 30th day, and 60th day after resveratrol supplementation (3-time points) were analyzed with repeated measures ANOVA. When sphericity assumptions were violated, degrees of freedom were adjusted using the Greenhouse Geisser correction. Pearson correlation analysis was used to study the relationships between HbA1c and the log-transformed HOMA-IR, HOMA-β, and insulin values. A post hoc test was done with Bonferroni correction. A p value of <0.05 was accepted as statistically significant. All statistical analyses were performed using PASW Statistics GradPack 18 (SPSS Inc., Chicago, IL, USA) and GraphPad Prism software, version 8.0.2 (GraphPad Software, Inc., San Diego, CA, USA).

In conclusion, the addition of resveratrol to insulin therapy in T1D patients resulted in a significant and rapid reduction in the level of FBS with a concomitant reduction in HbA1c and oxidative stress. These observations warrant a detailed investigation as to the potential of resveratrol for the treatment of T1D in future prospective randomized, placebo-controlled, double-blinded trials.

The authors also wish to thank Najmeh Hajian and Vida Soltani for coordinating the collection of samples and for laboratory managements. We also thank the Clinical Research Development Center, The Pertain Gulf Martyrs Hospital, Bushehr University of medical Sciences, for their full cooperation. 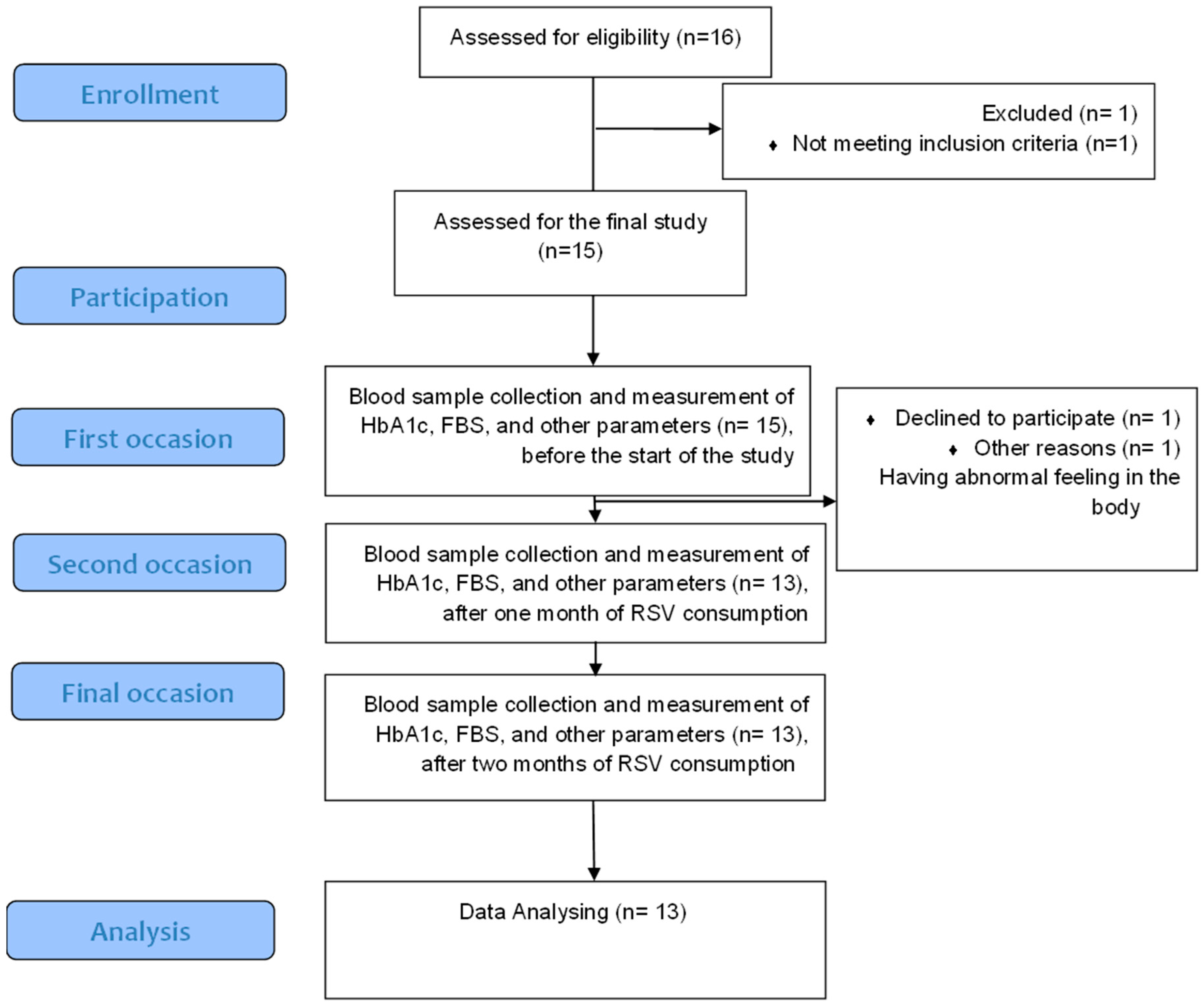 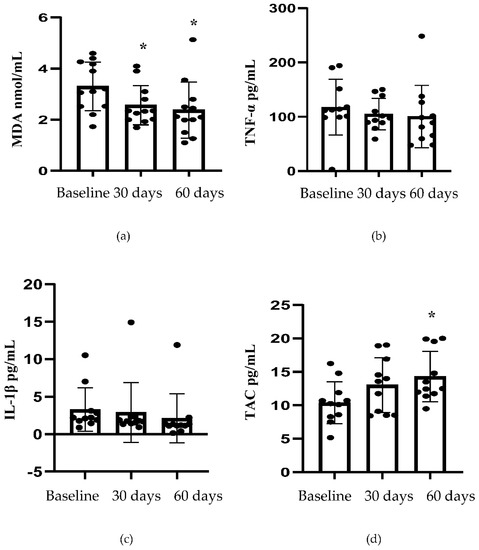 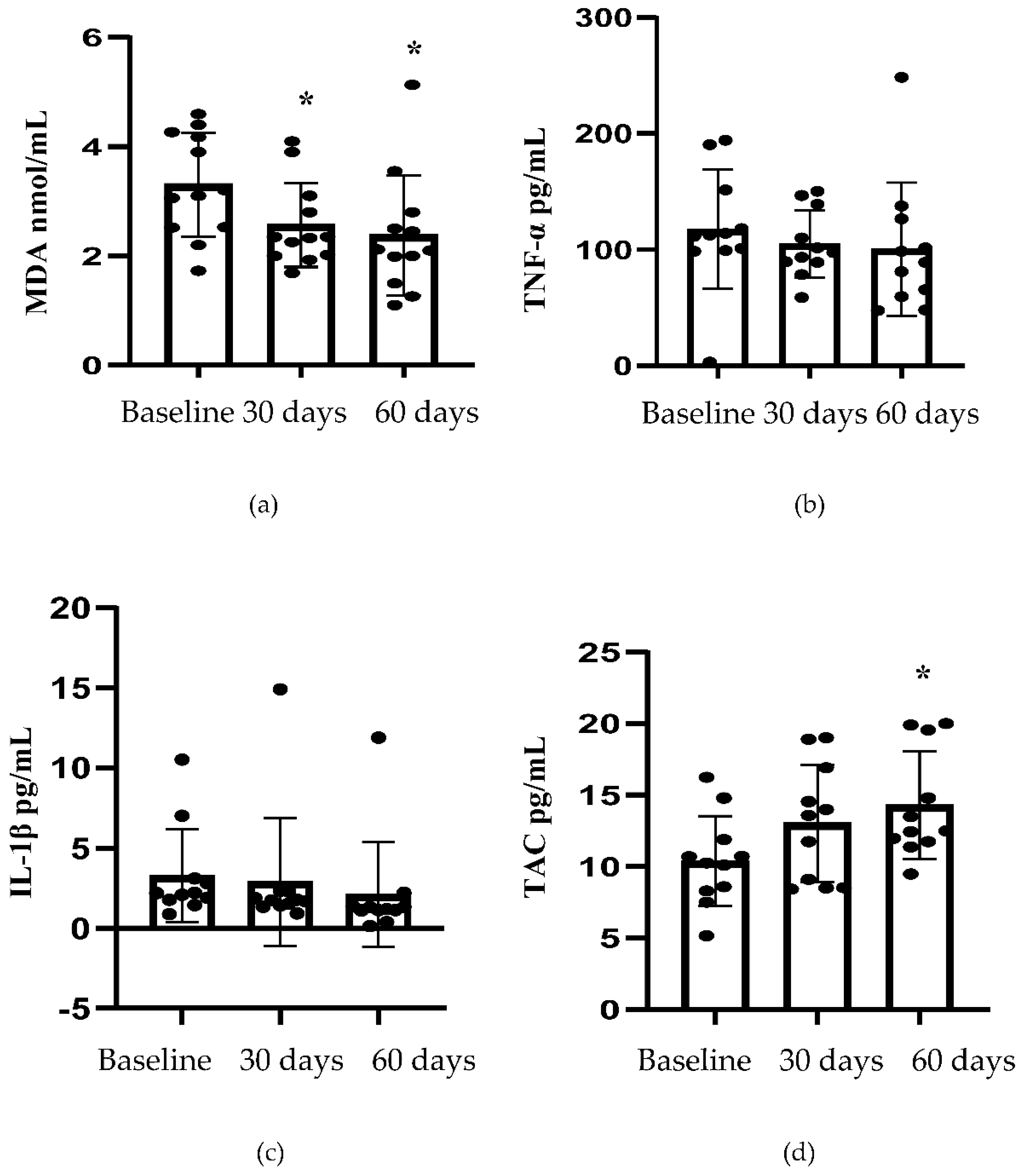