Ovotransferrin, a member of the transferrin family, is the second main protein found in egg white. Ovotransferrin was reported to have antimicrobial, antioxidant, and immunomodulating activities. The aim of this work was to characterize the cellular and molecular functions of egg white ovotransferrin on osteoclasts differentiation and function. Osteoclasts were prepared from mouse macrophage RAW 264.7 cells stimulated with receptor activator of nuclear factor κB ligand (RANKL). Ovotransferrin inhibited osteoclasts differentiation and the calcium–phosphate resorptive ability via the suppression of RANKL-induced nuclear factor κ-light chain-enhancer of activated B cells (NF-κB) and mitogen-activated protein kinase (MAPK) signaling pathways. Ovotransferrin induced apoptosis of matured osteoclasts, accompanied by increased expression of Bcl-2-like protein 11 (Bim) and Bcl-2-assoicated death promoter (Bad), but decreased expression of B-cell lymphoma 2 (Bcl-2) and B-cell lymphoma-extra-large (Bcl-xl). We established a novel role of egg white ovotransferrin as an inhibitor of osteoclastogenesis, which may be used for the prevention of osteoporosis. View Full-Text
Keywords: osteoclasts; osteoclastogenesis; NF-κB pathway; MAPK pathway; apoptosis osteoclasts; osteoclastogenesis; NF-κB pathway; MAPK pathway; apoptosis
►▼ Show Figures 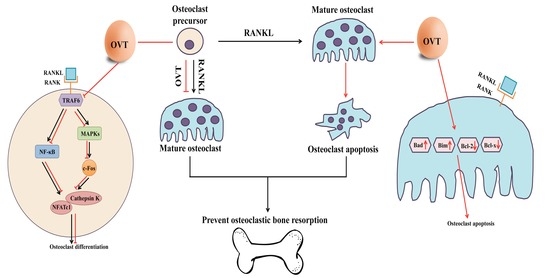