Food Addiction in Eating Disorders and Obesity: Analysis of Clusters and Implications for Treatment
Previous Article in Journal

Food Addiction: Implications for the Diagnosis and Treatment of Overeating

Obesity Stigma: Is the ‘Food Addiction’ Label Feeding the Problem?

Obesity is often attributed to an addiction to high-calorie foods. However, the effect of “food addiction” explanations on weight-related stigma remains unclear. In two online studies, participants (n = 439, n = 523, respectively, recruited from separate samples) read a vignette about a target female who was described as ‘very overweight’. Participants were randomly allocated to one of three conditions which differed in the information provided in the vignette: (1) in the “medical condition”, the target had been diagnosed with food addiction by her doctor; (2) in the “self-diagnosed condition”, the target believed herself to be a food addict; (3) in the control condition, there was no reference to food addiction. Participants then completed questionnaires measuring target-specific stigma (i.e., stigma towards the female described in the vignette), general stigma towards obesity (both studies), addiction-like eating behavior and causal beliefs about addiction (Study 2 only). In Study 1, participants in the medical and self-diagnosed food addiction conditions demonstrated greater target-specific stigma relative to the control condition. In Study 2, participants in the medical condition had greater target-specific stigma than the control condition but only those with low levels of addiction-like eating behavior. There was no effect of condition on general weight-based stigma in either study. These findings suggest that the food addiction label may increase stigmatizing attitudes towards a person with obesity, particularly within individuals with low levels of addiction-like eating behavior. View Full-Text
Keywords: food addiction; obesity; stigma; eating behavior; attitudes food addiction; obesity; stigma; eating behavior; attitudes
►▼ Show Figures 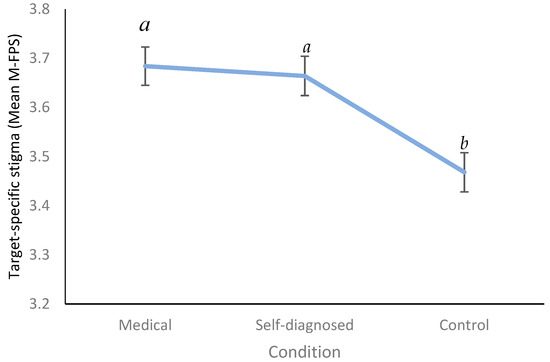