Carotenoids can be metabolized to various apo-carotenoids and retinoids. Apo-15´-carotenoic acid (retinoic acid, RA) is a potent activator of the retinoic acid receptor (RAR) in its all-trans- (ATRA) and 9-cis- (9CRA) forms. In this study we show firstly, that apo-14´-carotenoic acid (A14CA), besides retinoic acids, is present endogenously and with increased levels in the human organism after carrot juice supplementation rich in β-carotene. All-trans-A14C (ATA14CA) is just a moderate activator of RAR-transactivation in reporter cell lines but can potently activate retinoic acid response element (RARE)-mediated signalling in DR5/RARE-reporter mice and potently increase retinoid-reporter target gene expression in ATA14CA-supplemented mice and treated MM6 cells. Further metabolism to all-trans-13,14-dihydroretinoic acid (ATDHRA) may be the key for its potent effects on retinoid target gene activation in ATA14CA-treated MM6 cells and in liver of supplemented mice. We conclude that besides RAs, there are alternative ways to activate RAR-response pathways in the mammalian organism. ATA14CA alone and in combination with its metabolite ATDHRA may be an alternative pathway for potent RAR-mediated signalling. View Full-Text
Keywords: apo-carotenoids; retinoic acid; vitamin A; carotene apo-carotenoids; retinoic acid; vitamin A; carotene
►▼ Show Figures 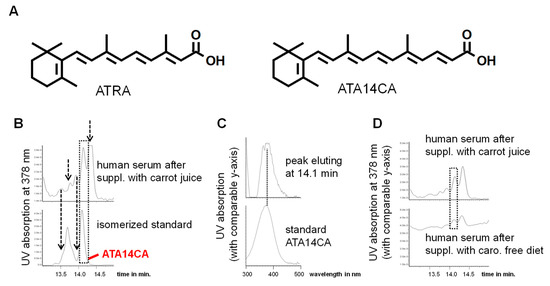