Selenoprotein-P (SELENOP) is the main carrier of selenium to target organs and reduces tissue oxidative stress both directly and by delivering selenium to protective selenoproteins. We tested if the plasma concentration of SELENOP predicts cardiovascular morbidity and mortality in the primary preventive setting. SELENOP was measured from the baseline exam in 2002–2006 of the Malmö Preventive Project, a population-based prospective cohort study, using a validated ELISA. Quintiles of SELENOP concentration were related to the risk of all-cause mortality, cardiovascular mortality, and a first cardiovascular event in 4366 subjects during a median (interquartile range) follow-up time of 9.3 (8.3–11) years using Cox proportional Hazards Model adjusting for cardiovascular risk factors. Compared to subjects in the lowest quintile of SELENOP, the risk of all three endpoints was significantly lower in quintiles 2–5. The risk (multivariate adjusted hazard ratio, 95% CI) decreased gradually with the lowest risk in quintile 4 for all-cause mortality (0.57, 0.48–0.69) (p < 0.001), cardiovascular mortality (0.52, 0.37–0.72) (p < 0.001), and first cardiovascular event (0.56, 0.44–0.71) (p < 0.001). The lower risk of a first cardiovascular event in quintiles 2–5 as compared to quintile 1 was significant for both coronary artery disease and stroke. We conclude that the 20% with lowest SELENOP concentrations in a North European population without history of cardiovascular disease have markedly increased risk of cardiovascular morbidity and mortality, and preventive selenium supplementation studies stratified for these subjects are warranted.
Keywords: Selenoprotein-P; selenium; cardiovascular disease; prevention; supplementation Selenoprotein-P; selenium; cardiovascular disease; prevention; supplementation

Selenium (Se) is an essential micronutrient of fundamental importance for human health [1]. A small group of proteins contains selenium as the 21st proteinogenic amino acid selenocysteine in their primary sequence at the active site, e.g., the glutathione peroxidases, thioredoxin reductases, iodothyronine deiodinases, and others [2]. These so-called selenoproteins are encoded by a set of 25 genes in humans [3]. Inherited defects causing reduced selenoprotein biosynthesis lead to a complex disease syndrome with myopathic features, male infertility, abnormal thyroid hormones, and signs of increased oxidative stress associated with high ultraviolet light (UV) radiation sensitivity and eventually neuronal loss [4].
The trace element is supplied by a regular diet; however, selenium intake levels differ strongly around the world due to biogeochemical differences [5]. Accordingly, the Se status of different populations depends on their soil quality as well as on the origin and pattern of the diet. Most of Europe, Africa, and Asia are considered as insufficiently supplied in contrast to e.g., the United States or Canada, partly reflected in genetic adaptations in populations residing in very selenium poor areas [6].
A low selenium intake causes insufficient expression of selenoproteins, low Se concentrations in the circulation and tissues, as well as an increased risk for certain diseases including colorectal cancer [7], autoimmune thyroid disease [8] or a sub-responsive immune system [9]. Different biomarkers are available for Se status assessment, of which total serum or plasma selenium concentrations and selenoprotein P (SELENOP) levels are established and considered as most reliable [10,11]. Circulating SELENOP mainly derives from hepatocytes and serves a Se transport function. Target cells express SELENOP-receptors that belong to the family of lipoprotein receptor-related proteins and can thereby become preferentially supplied with the essential trace element under Se-deficient conditions [12]. In addition, SELENOP also shows enzymatic activity and may protect vascular endothelial cells from oxidative and nitrosative stress and damage [13].
However, SELENOP status has not been studied yet with respect to cardiovascular disease (CVD), and there is a lack of large prospective studies in the primary preventive setting for the potential relationship between SELENOP and mortality [14]. Given the role of SELENOP as functional marker of Se status and availability, and the need for a large enough group of healthy subjects with sub-optimal Se supply, we tested the association of SELENOP with cardiovascular disease in a large European prospective cohort study.

The Malmö Preventive Project (MPP) is a Swedish single-center prospective population-based study. Between 1974–1992, in all 33,346 citizens of the city of Malmö in Southern Sweden were included. The recruited subjects were screened for traditional cardiovascular risk factors. Between 2002–2006, all subjects alive were invited for a re-examination in which 18,240 individuals participated. This re-examination in 2002–2006 forms the baseline exam of the current study. Here, cardiovascular risk factors were assessed, and plasma was separated and frozen to −80 degrees for later analyses. Approval was granted by the Regional Board of Ethics, Lund, Sweden (#2009/633). Of the 18,240 subjects, we excluded 2087 subjects who had had a cardiovascular disease event (coronary artery disease, myocardial infarction or stroke) prior to the baseline exam leaving 16,153 individuals. Of these, 15,743 had complete data on cardiovascular risk factors, from whom a random sample of 4500 subjects was selected for analysis of SELENOP, among whom 4366 had a stored EDTA-plasma available in which SELENOP was subsequently analyzed (Supplementary Figure S1).
All study subjects signed oral and written informed consent to participate and to publish the results, and the study protocols were approved by the Regional Board of Ethics in Lund, Sweden.

Participants underwent a medical history, physical examination, and laboratory assessment. Blood pressure was measured using an oscillometric device twice after 10 min of rest in the supine position. Diabetes mellitus was defined as fasting plasma glucose 7.0 mmol/L or above, a self-reported physician diagnosis of diabetes, or use of anti-diabetic medication. Cigarette smoking was elicited by a self-administered questionnaire, with current cigarette smoking defined as any use within the past year. Measurements of fasting serum total cholesterol, high density lipoprotein (HDL) cholesterol, and triglycerides were made according to standard procedures at the Department of Clinical Chemistry, Skåne University Hospital. low density lipoprotein (LDL) cholesterol was calculated according to Friedewald’s formula. Plasma SELENOP concentrations were measured in fasted ethylene-diamine-tetraacetic acid (EDTA)-plasma using a validated ELISA (selenOtest ELISA, selenOmed GmbH, Berlin, Germany) characterized recently in detail [15], which was independently proven as a highly reliable commercial assay [16]. Corresponding selenium concentrations were measured in a subsample of 284 subjects using total reflection X-ray fluorescence (Picofox S2, Bruker nano) as described [7].

The baseline plasma concentration of SELENOP was analyzed in the study sample of 4366 individuals free of any of the primary outcomes in question in relation to three primary outcomes: a first cardiovascular event, all-cause mortality and cardiovascular mortality (for event definitions, see below). In secondary analyses, we separated the cardiovascular disease endpoint into incidence of coronary artery disease (CAD) and stroke. The endpoints were retrieved through record linkage of the personal identification number of each Swedish individual and the Swedish Hospital Discharge Register (SHDR), the Swedish Cause of Death Register (SCDR), the Stroke in Malmö Register, and the Swedish Coronary Angiography and Angioplasty Registry (SCAAR). These registers were previously described and validated for classification of outcomes [17,18,19]. CAD was defined as fatal or nonfatal myocardial infarction, death due to ischemic heart disease, percutaneous coronary intervention (PCI), or coronary artery bypass grafting (CABG), whichever came first. Stroke was defined as fatal or nonfatal stroke. Follow-up for outcomes extended to 31 December 2014. Cardiovascular death was defined a main cause of death diagnosis, according to the death certificate, between codes 390–459 of the International Classification of Disease (ICD) version 9 or within the I-chapter of ICD version 10.

We measured the concentration of SELENOP in plasma from the baseline examination (between 2002–2006) of 4366 subjects of the Malmö Preventive Project who were free from prior cardiovascular disease. Quintiles of SELENOP (lowest quintile defined as reference) were related to risk of (1) all-cause mortality, (2) cardiovascular mortality, and (3) a first cardiovascular disease event (fatal or non-fatal myocardial infarction or stroke, coronary revascularization or death due to coronary heart disease) during follow-up using Cox Proportional Hazards Models adjusted for age, gender, current smoking, systolic blood pressure, use of antihypertensive medication, diabetes mellitus, LDL-cholesterol, HDL-cholesterol, and body mass index. Correlation between plasma concentration of SELENOP and Se was tested using Spearman’s correlation. Statistical analysis was performed using SPSS (v22.0; IBM Corp., Armonk, NY, USA). A two-sided p < 0.05 was considered significant.

Dr. Bergmann reports being president of Sphingotec GmbH, which holds the patent rights for the use of Selenoprotein-P in prediction of cardiovascular disease. Prof. Melander reports being listed as inventor on the same patent application.

O.M., M.O.-M., and L.S. designed the study. O.M. and M.O.-M. did the statistical analyses. O.M. and L.S. wrote the manuscript. O.M., L.S., J.S., and A.B. collected the material. All authors critically reviewed the manuscript and approved its submission.

Struck reports being employed by Sphingotec GmbH. Schomburg holds shares in selenOmed GmbH, a company involved in selenium status assessment and supplementation. The funders stated above had no role in the design of the study; in the collection, analyses, or interpretation of data; in the writing of the manuscript, or in the decision to publish the results. 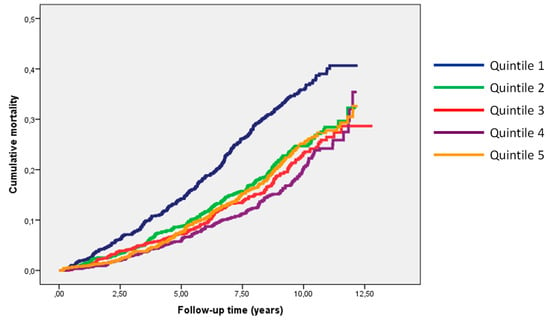 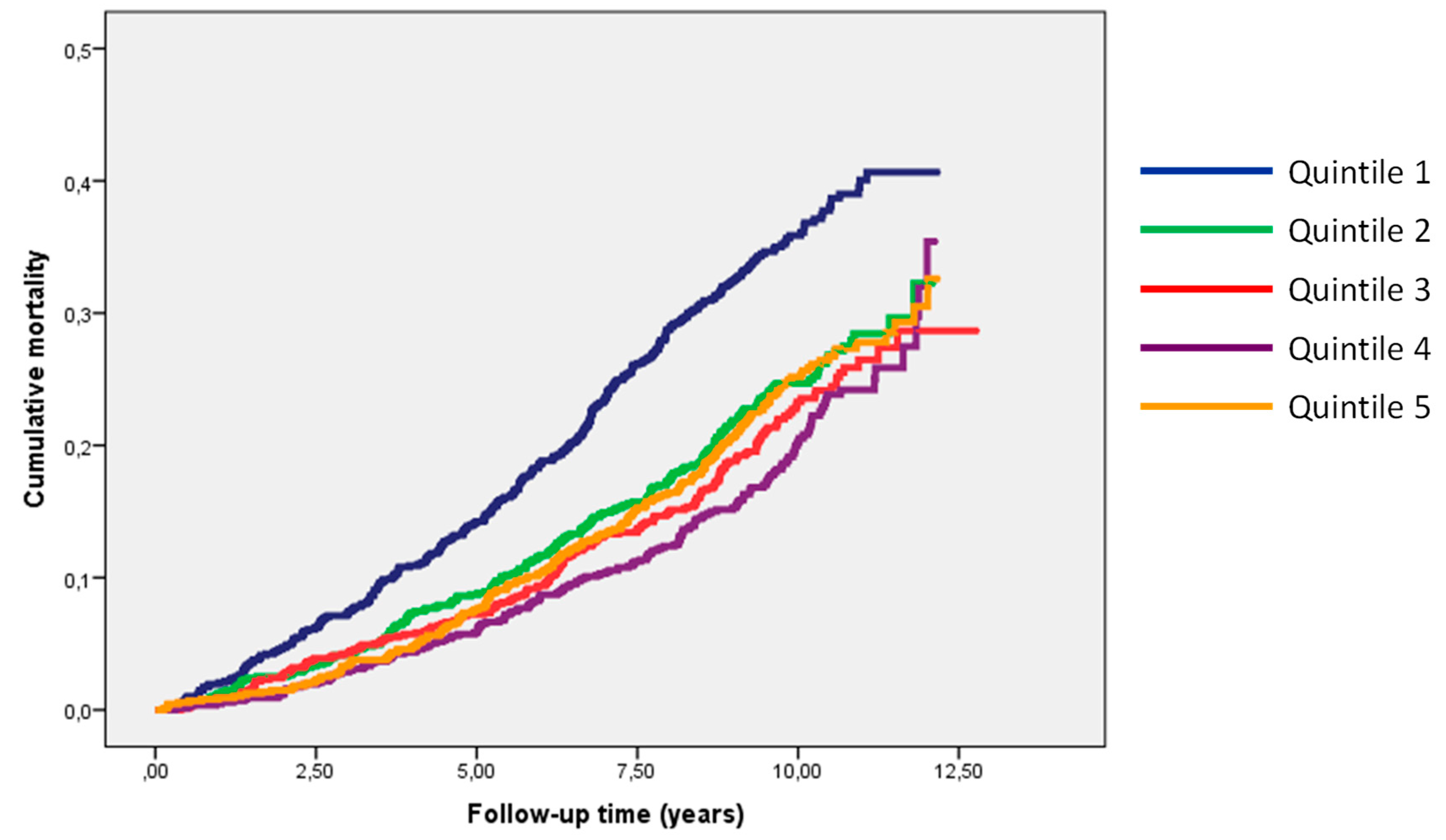 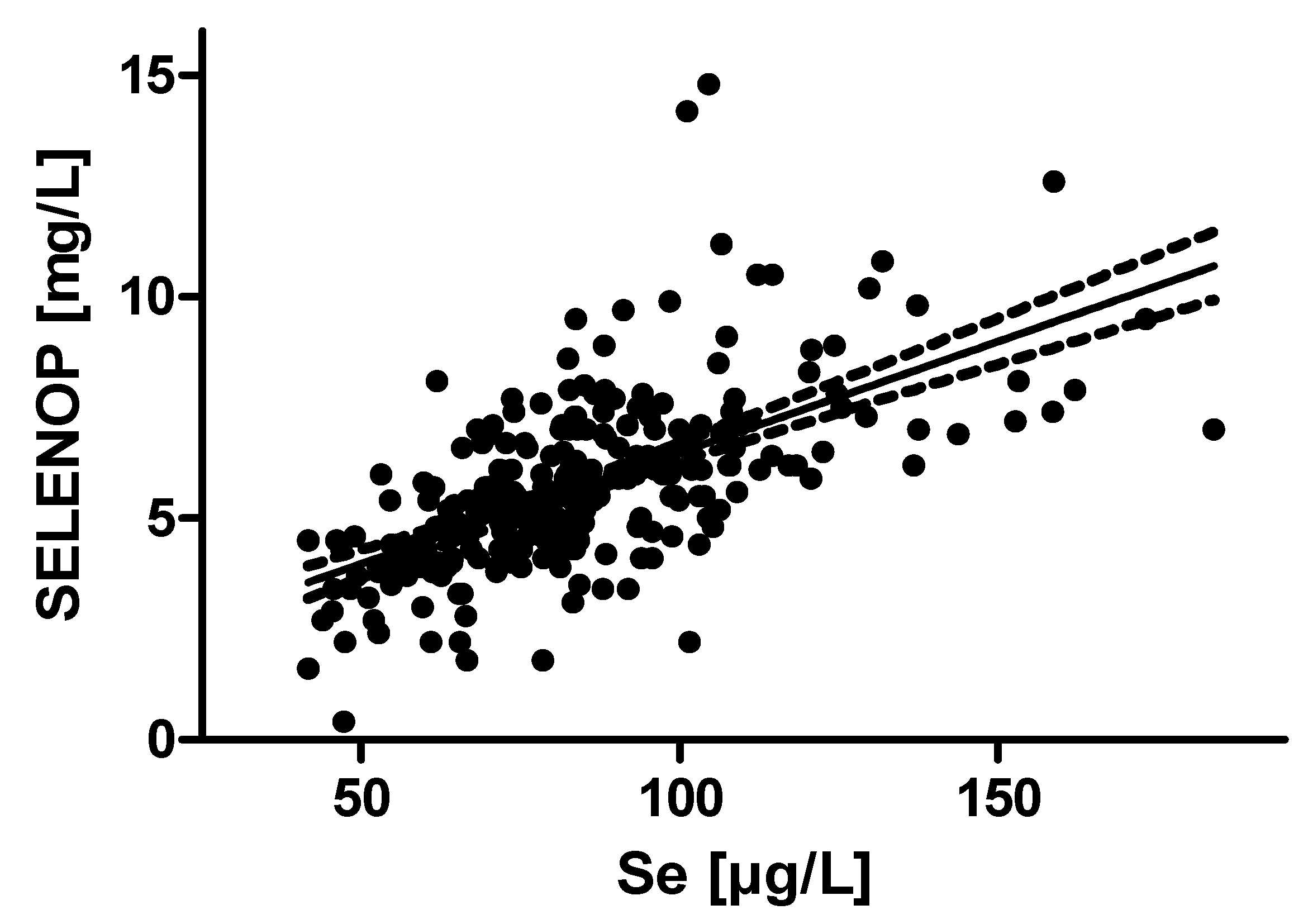