Food Addiction: Implications for the Diagnosis and Treatment of Overeating
Previous Article in Journal

Irrational beliefs (IB) are believed, in cognitive behavioral therapies, to be a prime cause of psychopathologies including anxiety, depression, problem eating, and alcohol misuse. “Food addiction” (FA), which has been modeled on diagnostic criteria for substance use disorder, and emotional eating (EE) have both been implicated in the rise in overweight and obesity. Both FA and EE are associated with anxiety. Thus, in the present study, the hypothesis that IB is associated with FA and with EE was tested. Furthermore, possible mediation of these relationships by trait anxiety and depression (and EE for IB and FA) was examined. The responses of 239 adult participants to questionnaires measuring FA, IB, EE, depression, trait anxiety, and anthropometrics were recorded. The results revealed that IB was significantly positively correlated with FA and EE (and depression and trait anxiety). Furthermore, only EE mediated the effect of IB on FA and this was not moderated by BMI. Finally, trait anxiety (but not depression) mediated the effect of IB on EE. Exploratory analysis revealed a significant serial mediation such that IB predicted higher FA via elevated trait anxiety and emotional eating in that order. The results of this study suggest that IB may be a source of the anxiety that is associated with EE and FA and suggest that clinicians may find IB a target for treatment of those persons who report experiences of EE and FA. IB may play a role in food misuse that leads to elevated BMI. View Full-Text
Keywords: food addiction; irrational beliefs; emotional eating; anxiety; food misuse food addiction; irrational beliefs; emotional eating; anxiety; food misuse
►▼ Show Figures 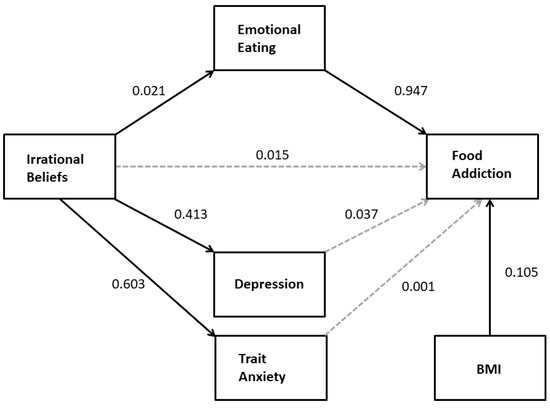