Spices were used as food preservatives prior to the advent of refrigeration, suggesting the possibility of effects on microbiota. Previous studies have shown prebiotic activities in animals and in vitro, but there has not been a demonstration of prebiotic or postbiotic effects at culinary doses in humans. In this randomized placebo-controlled study, we determined in twenty-nine healthy adults the effects on the gut microbiota of the consumption daily of capsules containing 5 g of mixed spices at culinary doses by comparison to a matched control group consuming a maltodextrin placebo capsule. The 16S ribosomal RNA sequencing data were used for microbial characterization. Spice consumption resulted in a significant reduction in Firmicutes abundance (p < 0.033) and a trend of enrichment in Bacteroidetes (p < 0.097) compared to placebo group. Twenty-six operational taxonomic units (OTUs) were different between the spice and placebo groups after intervention. Furthermore, there was a significant negative correlation between fecal short-chain fatty acid propionate concentration and Firmicutes abundance in spice intervention group (p < 0.04). The production of individual fecal short-chain fatty acid was not significantly changed by spice consumption in this study. Mixed spices consumption significantly modified gut microbiota, suggesting a prebiotic effect of spice consumption at culinary doses. View Full-Text
Keywords: spices; gut microbiota; prebiotic effect; firmicutes; short-chain fatty acids; dietary intervention spices; gut microbiota; prebiotic effect; firmicutes; short-chain fatty acids; dietary intervention
►▼ Show Figures 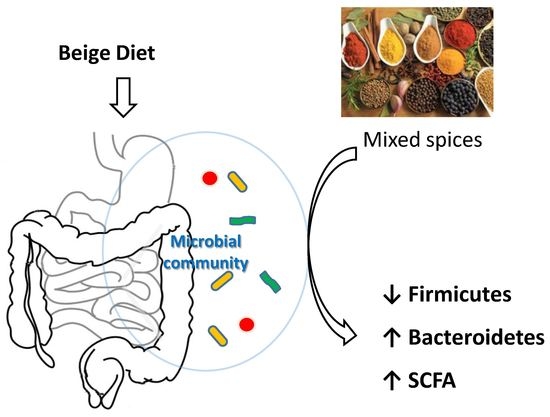