Multiple studies have indicated that a higher intake of vegetables is associated with a reduction of cardiovascular diseases (CVDs) and possibly with a reduction of obesity, type 2 diabetes, chronic respiratory diseases, and some types of cancer [1,2,3,4,5,6]. The benefits of vegetables on the prevention of non-communicable diseases (NCDs) may be explained by their relatively high content of micronutrients, antioxidant compounds, polyphenols, and fibers, which may each counteract the biochemical processes that cause CVDs and other NCDs [7,8]. According to the Global Dietary Database 1990–2010, vegetable (including legumes) intake ranged from 35–493 g/day, with a mean intake of 209 g/day. The authors concluded that the intake was, in most countries, lower than recommended to prevent chronic diseases [9].
Health authorities such as the World Health Organization/Food and Agriculture Organization (WHO/FAO) recommend a daily intake of ≥400 g/day fruits and vegetables, which corresponds to five or more servings of 80 g/day [10]. Many countries add to this recommendation that three out of these five servings should come from vegetables (≥240 g/day). WHO/FAO does not include tubers such as potatoes and cassava in their definition of vegetables [11]. However, unclarity exists as to whether all vegetable sources (e.g., sauces, meals, and soups) can be regarded as a vegetable. In the UK, for example, processed vegetables in frozen, canned, and dried form, as well as vegetable juices, are included to meet the recommendation [12]. At the same time, dried vegetable powders do not qualify to count as a vegetable portion according to guidelines on calculating and communicating fruit and vegetable portions in composite foods by the Institute of Grocery Distribution in the UK [13]. As a consequence, most definitions do not include vegetables in dried soups, although these products may be a significant source. A general lack of adequate data on the nutritional composition of dried vegetables and dried vegetable soups may underlie these decisions.
The drying or dehydration of vegetables is applied to preserve vegetables and their flavors and nutrients. Drying methodologies include osmotic, convective, fluidized bed, ohmic, microwave, vacuum, and freeze-drying techniques [14]. Before the actual drying phase, there is a pre-processing step to remove foreign materials and to select, wash, occasionally peel, deseed, and reduce the size of the vegetables. Techniques such as blanching, acid treatment, and the application of coatings are regularly applied to preserve the quality of the vegetables [14]. Though the industrialized drying process is optimized to maximally preserve food quality, both pre-processing and drying may degrade certain nutrients, particularly heat-labile nutrients, such as flavonoids, carotenoids, and vitamins [15]. As chemical analyses of nutrients are expensive, there are limited published data on the nutritional composition of dried vegetable soups. Data on these products in food composition tables (FCTs) originate in most cases from a limited number of data sources that may be based on outdated analytical methods. To judge whether the vegetables in these soups qualify as vegetables for recommended intakes, there is a need for better data on the nutritional composition of dried vegetable soups.
The current study aimed to measure the nutritional composition of dry vegetable powders used in dry soups and to compare these with published data of fresh and cooked vegetables. Its second aim was to assess the nutritional composition of dry vegetable soups and to compare these with published data of home-made and other soups. Based on these data, the fresh vegetable equivalents of dry vegetable powders in dry soups will be determined.

We analyzed the nutrient content of dry vegetable soups and also analyzed the dry vegetable powders that were used as main ingredients for the soups. Therefore, four commonly consumed vegetable soup varieties commercially available on the European market, including dry tomato, onion, pumpkin, and legumes/pulses (lentil and bean) soups, were selected for the nutrient analyses. A fifth soup type comprising a mixture of vegetables was added to cover a wider range of variety in vegetable ingredients such as celeriac, carrot, leek, beetroot, and broccoli. The trade names and composition of all soups can be found in the Supplemental data S1. For each type of soup, two varieties were selected so that in total 10 dried soup products were analyzed.
Three packs of each soup product were obtained directly from the filling line in the different Knorr factories in Europe. We also took three samples of 200 g of the dry vegetable powder that was the main ingredient of each soup variety (covering 39–96% of the ingredients), including tomato, onion, pumpkin, and lentil powder.
Samples were shipped at ambient temperature to the laboratory “Institut Kuhlmann GmbH Analytik-Zentrum” (Ludwigshafen, Germany), where samples were homogenized and subsequently analyzed in triplicate. Insoluble and soluble high and low molecular weight fiber were determined by AOAC 2009.01 and expressed as total dietary fiber. Magnesium, iron, zinc, potassium, and sodium were determined via microwave digestion followed by analysis by ICP-OES (ISO-16943). β-carotene, lycopene, and lutein were determined by HPLC Diode-Array Detection (HPLC-DAD). Provitamin A β-carotene was converted to retinol activity equivalents using a factor 12. Thiamin (vitamin B1) and riboflavin (vitamin B2) were determined by HPLC with fluorescence detection; niacin (vitamin B3), pantothenic acid (vitamin B5) and pyridoxine and pyridoxal (vitamin B6) were determined by HPLC-MRM-MS, and total folate was determined by measuring the turbidity of Lactobacillus casei growth according to AOAC 2004.05. Total vitamin C was determined by extracting the samples with meta-phosphoric acid solution followed by a homocysteine treatment and quantification by HPLC-DAD. Phytomenadione (vitamin K1) was determined after fat reduction with lipase and extraction with hexane, and it was quantified by HPLC with fluorescence detection.
Because the amount of dry soup to prepare a serving of 250 mL ranged from 16 g dried powder for onion soup to 67 g for the dried lentil soup, the nutrient values of the dried soup powders were expressed per serving size to allow a practical comparison between soup varieties.
The nutrient values of the dried powders and soups per serving were compared to the dietary reference intake (DRI) values by the European Food Safety Authority [16].

Table 3 shows the nutritional composition of the dry vegetable soups per serving of 250 mL. The lentil soup contained the most nutrients per serving, with contributions to the DRI per serving of 45% for fiber, 17–23% for minerals, 8–17% for B-vitamins, and 15% for vitamin K. For the other soups, nutrient contributions to the DRI per serving were 11–21% for fiber, 3–6% for iron, magnesium and zinc, 8–22% for potassium, 11–15% for vitamin A, 2–12% for B-vitamins, and 2–14% for vitamin K. Vitamin C could only be detected in the tomato soup, where one serving contributed to 18% DRI. Folic acid could not be detected in any of the soups.

3.4. Comparison of Nutrient Density Scores of Dry Vegetable Soups with Home-Made and Other Soups

This research was funded by Unilever.

We would like to thank Peter L. Zock, Unilever R&D Vlaardingen, Netherlands for critical review of the manuscript.

All authors are employees of Unilever. Unilever markets foods such as vegetable soups. 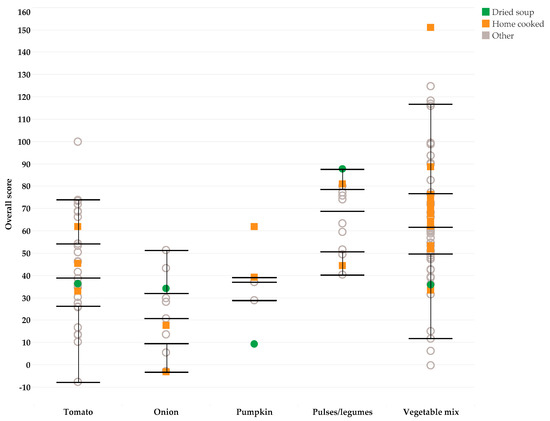 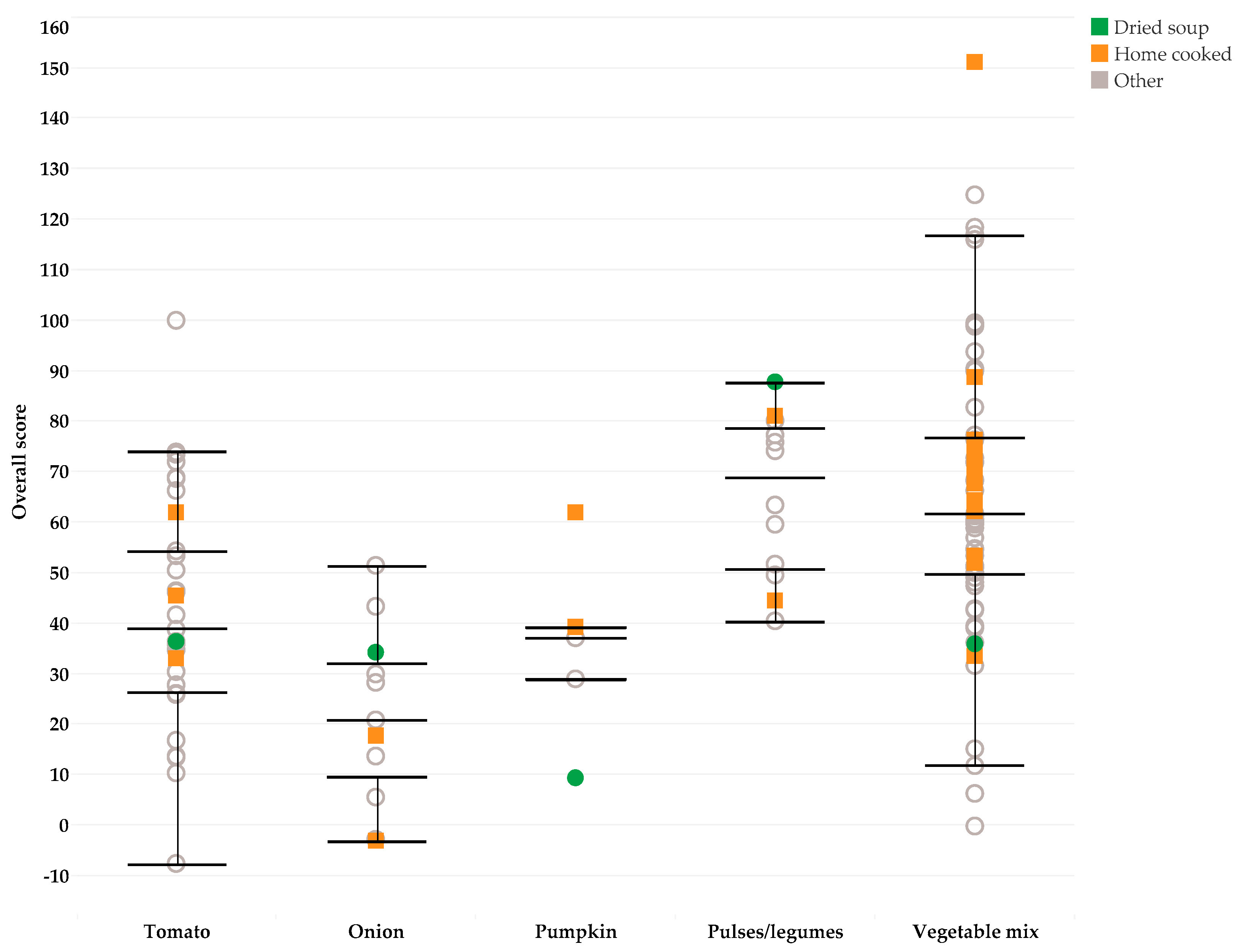 Table 1. Mean nutrient content of dry vegetable powders.
Table 1. Mean nutrient content of dry vegetable powders.
1 Values are means ± SD of two varieties of each dried vegetable type (e.g., the nutritional composition of tomato powder was based on the mean of the values of two tomato powder varieties). 2 Vitamin A was calculated from analyzed β-carotene values that were converted to retinol activity equivalents. 3 NA = not analyzed. 4 LOQ = limit of quantification; for vitamin C this was set at 10 mg/100 g dry vegetables. 5 Based on total dietary fiber, magnesium, iron, zinc, potassium, vitamin A, thiamin, riboflavin, niacin, pantothenic acid, pyridoxine, vitamin C, and vitamin K1 as positive nutrients and sodium as a negative nutrient, with the exception that vitamin C and K1 were not included in the score for onion, pumpkin, and lentil; vitamin A was not included for onion and lentil powders.

Table 4. Vegetable content of dry vegetable soups per 250 mL serving.
Table 4. Vegetable content of dry vegetable soups per 250 mL serving.
1 Values are means of two sub varieties of each vegetable soup variety. 2 Factor is a weighted mean of factors to account of rehydration of the different dried vegetable powders. 3 Based on WHO/FAO of ≥240 g/day [10].
© 2019 by the authors. Licensee MDPI, Basel, Switzerland. This article is an open access article distributed under the terms and conditions of the Creative Commons Attribution (CC BY) license (http://creativecommons.org/licenses/by/4.0/).
We use cookies on our website to ensure you get the best experience. Read more about our cookies here.
Accept
We have just recently launched a new version of our website. Help us to further improve by taking part in this short 5 minute survey here. here.
Never show this again