Eight in ten female readymade garment (RMG) workers in Bangladesh suffer from anemia, a condition which damages both health and productivity. This study evaluated the effectiveness of a workplace nutrition program on anemia reduction in female RMG workers of Bangladesh. A quasi-experimental mixed method study was conducted on 1310 non-pregnant female RMG workers from four factories. Two types of intervention packages (A and C) were tested against their respective controls (B and D) over a 10-month period. Among factories that already provided lunch to workers with regular behavior change counseling (BCC), one intervention (A) and one control (B) factory were selected, and among factories that did not provide lunches to their workers but provided regular BCC, one intervention (C) and one control (D) factory were selected: (A) Lunch meal intervention package: daily nutritionally-enhanced (with fortified rice) hot lunch, once weekly iron-folic acid (IFA) supplement and monthly enhanced (with nutrition module) behavior change counseling (BCC) versus (B) Lunch meal control package: regular lunch and BCC; and (C) Non-meal intervention package: twice-weekly IFA and enhanced BCC versus (D) Non-meal control package: BCC alone. Body weight and capillary hemoglobin were measured. Changes in anemia prevalence were estimated by difference-in-difference (DID) method. Thematic analysis of qualitative in-depth interviews with RMG workers was performed and findings were triangulated. Anemia was reduced significantly in both lunch meal and non-meal intervention (A and C) group (DID: 32 and 12 percentage points, p: <0.001 and <0.05 respectively). The mean hemoglobin concentration also significantly increased by 1 gm/dL and 0.4 gm/dL in both A and C group (p: <0.001 respectively). Weight did not change in the intervention groups (A and C) but significantly increased by more than 1.5 kg in the comparison groups (B and D). The knowledge of different vitamin and mineral containing foods and their benefits was increased significantly among all participants. Workplace nutrition programs can reduce anemia in female RMG workers, with the greatest benefits observed when both nutritionally enhanced lunches and IFA supplements are provided. View Full-Text
Keywords: anemia; readymade garments; female workers; workplace program; Bangladesh anemia; readymade garments; female workers; workplace program; Bangladesh
►▼ Show Figures 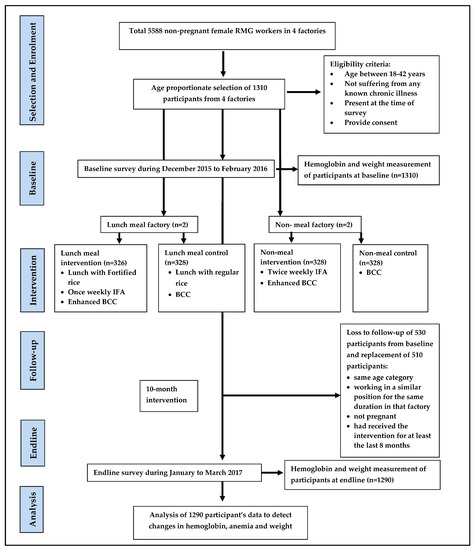