Euglena gracilis EOD-1, a microalgal strain known for high yields of the β-1, 3-glucan paramylon, is suggested to function as a dietary fiber and enhance immunity. Here, we aimed to investigate the effects of E. gracilis EOD-1 biomass (EOD1BM) ingestion on immunoglobulin A (IgA) antibody titers in saliva, its reactivity, and the health-related quality of life (QOL) in humans. Reacting human immunoglobulin preparations and saliva with paramylon granules revealed the presence of anti-paramylon antibodies in the blood and saliva. We conducted a placebo-controlled, double-blind, crossover study involving 13 healthy subjects who ingested the placebo or EOD1BM for 4 weeks. Saliva was collected from each subject before and after ingestion, and IgA titers and E. gracilis EOD-1 paramylon (EOD1PM) reactivity were compared. In the EOD1BM Ingestion group, the anti-EOD1PM IgA content and titer increased after EOD1BM ingestion. No such change was observed in the Placebo group. Furthermore, the health-related QOL, especially mental health, increased in the EOD1BM Ingestion group. Thus, EOD1BM ingestion led to the production of paramylon (PM)-specific IgA antibody and increased salivary IgA antibody titers. We demonstrate that EOD1BM ingestion enhanced the immunity in the mucosal surface, evoked an antigen-specific response, and increased the health-related QOL, thereby contributing to health improvement. View Full-Text
Keywords: paramylon; β-1, 3-glucan; antibody; IgA; QOL paramylon; β-1, 3-glucan; antibody; IgA; QOL
►▼ Show Figures 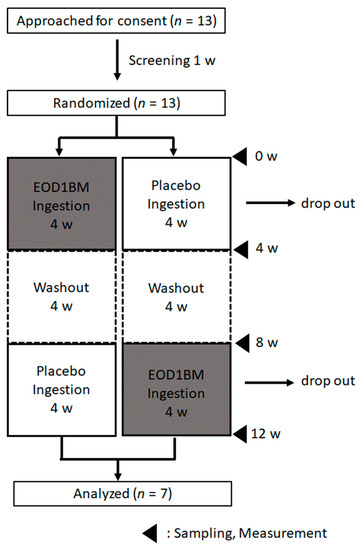