From Probiotics to Psychobiotics: Live Beneficial Bacteria Which Act on the Brain-Gut Axis

:
There is an important relationship between probiotics, psychobiotics and cognitive and behavioral processes, which include neurological, metabolic, hormonal and immunological signaling pathways; the alteration in these systems may cause alterations in behavior (mood) and cognitive level (learning and memory). Psychobiotics have been considered key elements in affective disorders and the immune system, in addition to their effect encompassing the regulation of neuroimmune regulation and control axes (the hypothalamic-pituitary-adrenal axis or HPA, the sympathetic-adrenal-medullary axis or SAM and the inflammatory reflex) in diseases of the nervous system. The aim of this review is to summarize the recent findings about psychobiotics, the brain-gut axis and the immune system. The review focuses on a very new and interesting field that relates the microbiota of the intestine with diseases of the nervous system and its possible treatment, in neuroimmunomodulation area. Indeed, although probiotic bacteria will be concentrated after ingestion, mainly in the intestinal epithelium (where they provide the host with essential nutrients and modulation of the immune system), they may also produce neuroactive substances which act on the brain-gut axis.
Keywords:
probiotics; microbiota; beneficial bacteria; psychobiotics; human health 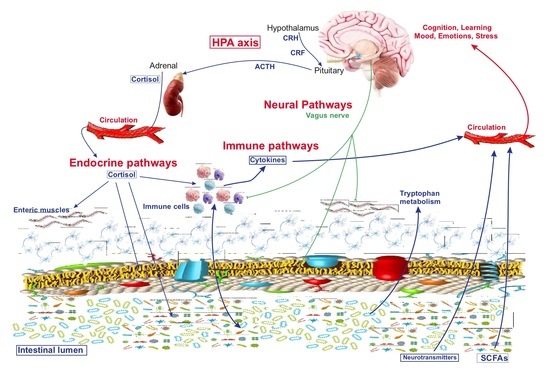 The skin and mucosal surfaces of vertebrates contain a wide collection of microorganisms (collectively named microbiota) which includes bacteria, fungi, parasites and viruses. The human gut harbors one of the most complex and abundant ecosystems composed of up to 1013–1014 microorganisms which is between 1 to 10 times more than the number of eukaryotic cells in the body [1,2]. The collective adult human gut microbiota is composed of a maximum of 500–1000 bacterial species [1,3,4].
Hundreds of years of co-evolution have led to a mutual symbiosis between the host and gut microbiome. Indeed, the gut is rich in molecules that can be used as nutrients by the microorganisms, favoring microbiota colonization [1]. Gut colonization begins at birth and is established in the first 3 years of life. The initial interaction between gut microbiota and the host is indispensable for the maturation of the nervous system, the immune system and for the developmental regulation of intestinal physiology [1,5,6]. At this stage, gut microbiota is also able to modulate the process of angiogenesis [7]. Furthermore, microorganisms also display anti-microbial activities, thus maintaining a stable gut ecosystem. Alterations in the process of microbial colonization of the human gut in early life have been shown to influence the risk of disease [8].
Later in life, microbial colonization of the intestine has a significant impact on the host neurophysiology, behavior and function of the nervous system [9,10,11]. Given the immunomodulatory properties of gut microbiota, it has been shown that different immune pathways, inside and outside the central nervous system (CNS) are involved in important mechanisms like microbial mediation of brain functions and behavior. It has been discovered that neuroimmune modulation by the microbiota is able to contribute to etio-pathogenesis or to display important signs and symptoms in neurodegenerative and behavioral disorders such as autism spectrum disorders (ASD), anxiety, depression, Alzheimer’s disease (AD) and Parkinson’s disease (PD) [9].
Furthermore, different bacteria, which are commonly present in a large diversity of food products, transit through our gut every day, interacting with the food products themselves, the host microbiota, and our own cells in either a healthy or a pathological context. Many of the latter microorganisms are known as probiotics. Probiotics are defined as “live microorganisms which when administered in adequate amounts confer a health benefit on the host” [12]. This concept is based on the observations made by Élie Metchnikoff in 1907 in which the regular consumption of lactic acid bacteria (LAB) in fermented dairy products, such as yogurt, was associated with enhanced health and longevity in many people living in Bulgarian villages.
In association with probiotics, the concept of prebiotic was firstly introduced by Gibson and Roberfroid in 1995 as a “non­digestible food ingredient that beneficially affects the host by selectively stimulating the growth and/or activity of one or a limited number of bacteria already resident in the colon” [13]. This definition implies their ability to resist host digestion and their unique activity on microbiota intestinal. However, the progress in prebiotic study has forced the evolution of this definition, as they can also be directly administered to other sites of the body that are also colonized by commensal bacteria, such as skin or vagina. Recently, the International Scientific Association for Probiotics and Prebiotics (ISAPP) in a consensus panel proposed a new definition of prebiotics as “a substrate that is selectively utilized by host microorganisms conferring a health benefit”, considering that dietary ones must not be degraded by host enzymes [14]. Substrates that fit with this definition include oligosaccharides (OS), polyunsaturated fatty acid, conjugated linoleic acid, plant polyphenols, and certain fermentable fibers. Among prebiotics highlight fructooligosaccharides (FOS), inulin, galactooligosaccharides (GOS), mannanoligosaccharides (MOS), xylooligosaccharides (XOS) and human milk oligosaccharides (HMO), being FOS and GOS the most studied as well as the classically accepted ones [14]. Prebiotics have been demonstrated to exert beneficial effects on the gastrointestinal tract, immune system, bones, lipid and sugar metabolism, and on mental health.
Dinan and coworkers [15] originally defined psychobiotics as probiotics that, upon ingestion in adequate amounts, yield positive influence on mental health. Because prebiotics have demonstrated benefit on mental health and they support the growing of specific commensal bacteria with psychophysiological effects, prebiotics can be included in the definition of psychobiotics [16]. In this sense, most prebiotic substrates analyzed for their neural effects are FOS and GOS, which favorably stimulate the growth of bifidobacteria and lactobacilli.
The effect of psychobiotics is not limited to the regulation of the neuroimmune axes (hypothalamic pituitary adrenal (HPA)-axis, sympatho-adrenal medullary (SAM)-axis and the inflammatory reflex) and in diseases that involve the nervous system, but they are also related to cognitive, memory, learning and behavior. Psychobiotics have thus opened a very broad and interesting panorama that changes the current paradigm of symbiosis between bacteria and humans. From this new point of view, this relationship seems to be more a commensalism, rather than a pure symbiosis.

2. Axes of Neuroimmune Control and Regulation

3. The Interaction of Microbiota with Enteric Nervous System and Brain-Gut Axes

Nowadays, we recognize the need to study the human microbiota and probiotics as a whole ecosystem to better understand the relation between microbiota and host health or disease. One of the major limitations in using psychobiotics in humans is the lack of its possible interaction with sex hormones (estrogen and/or testosterone) and its long-term effect. Preliminary findings on how probiotic treatments, called psychobiotics, may help improve your mood, decrease your anxiety, and strengthen your memory suggest that in the near future these probiotics could be prescribed to treat depression, anxiety, and other mental health issues, by using them in the form of food or supplements to alter the gut microbiome and treat psychiatric conditions. 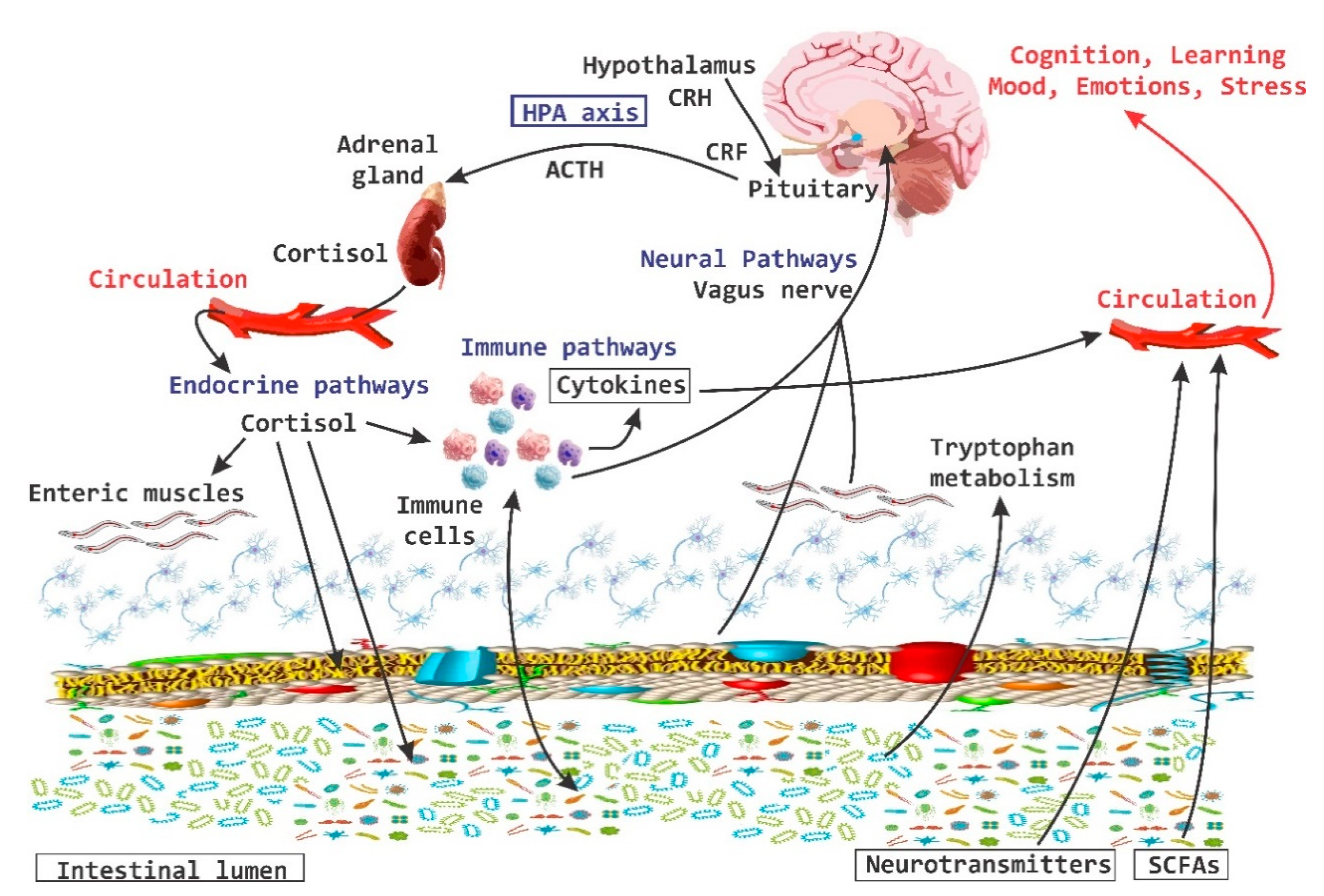 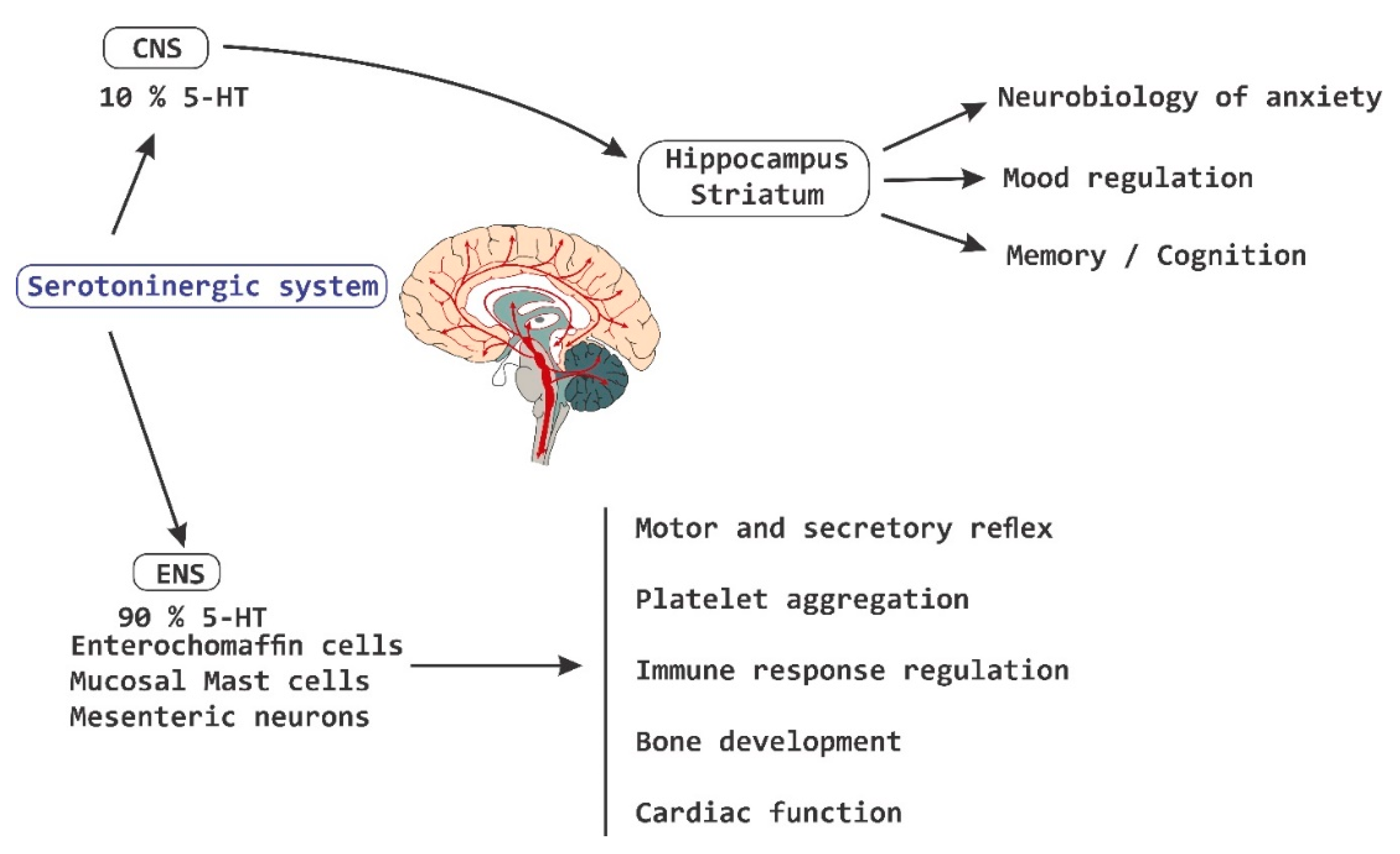 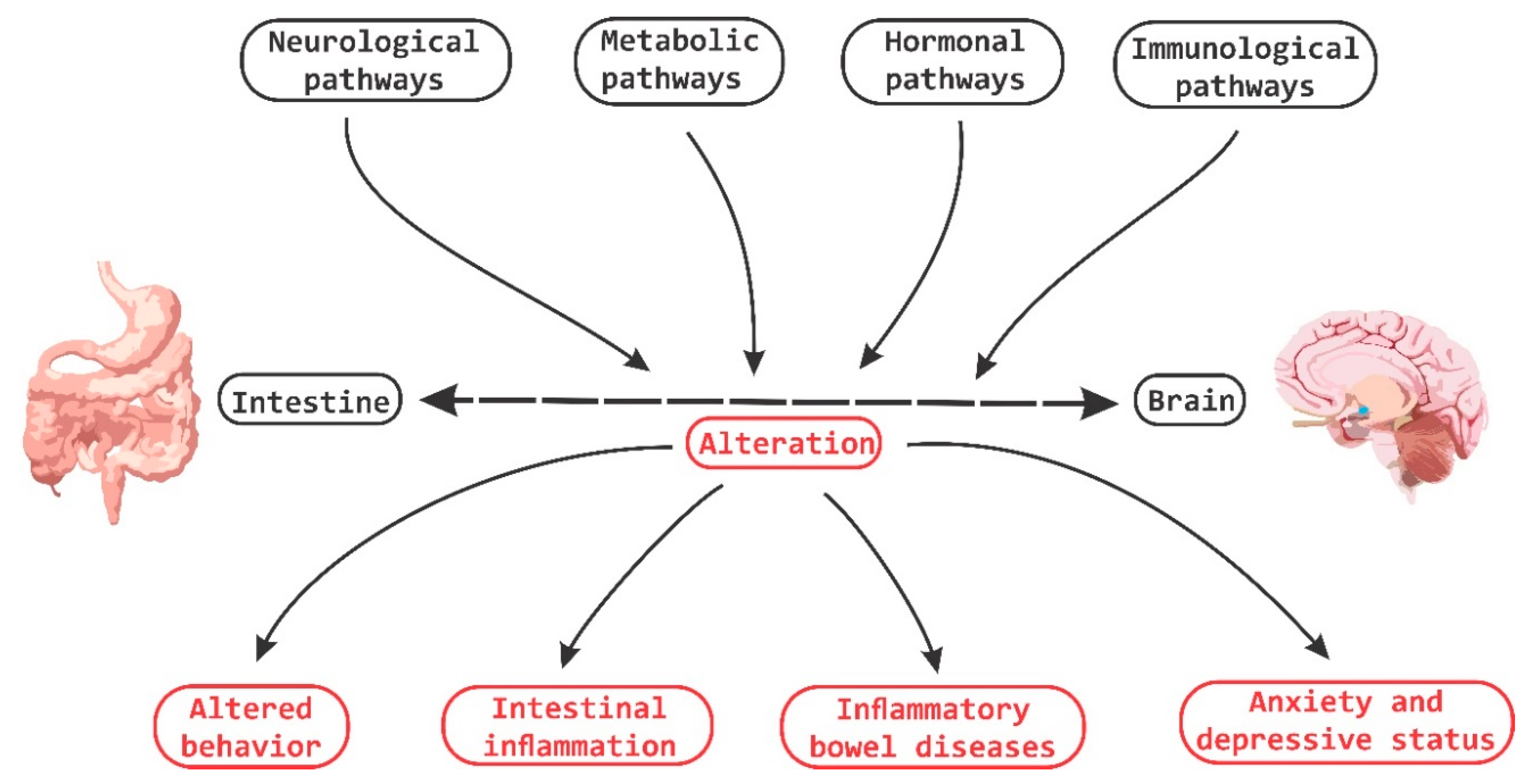 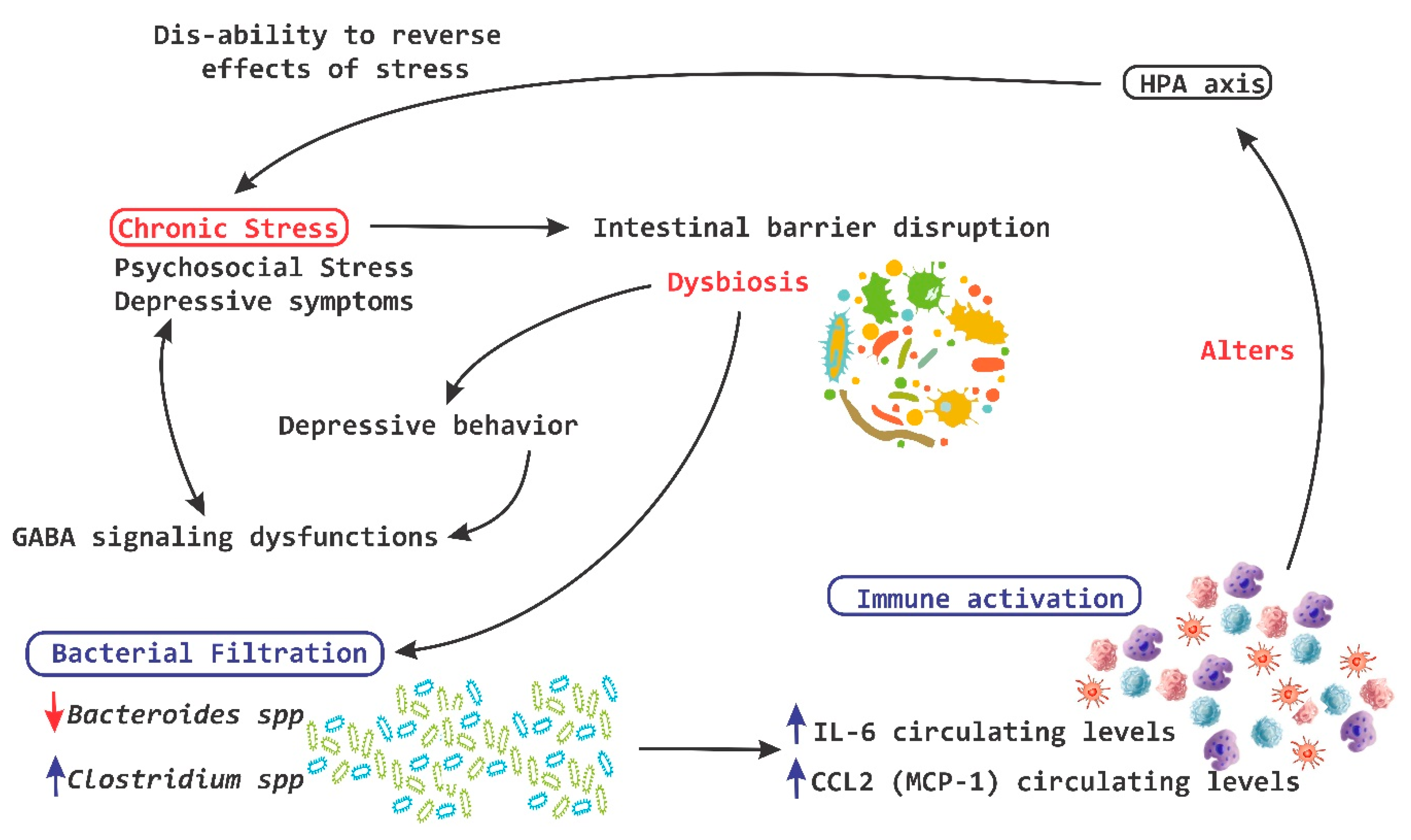 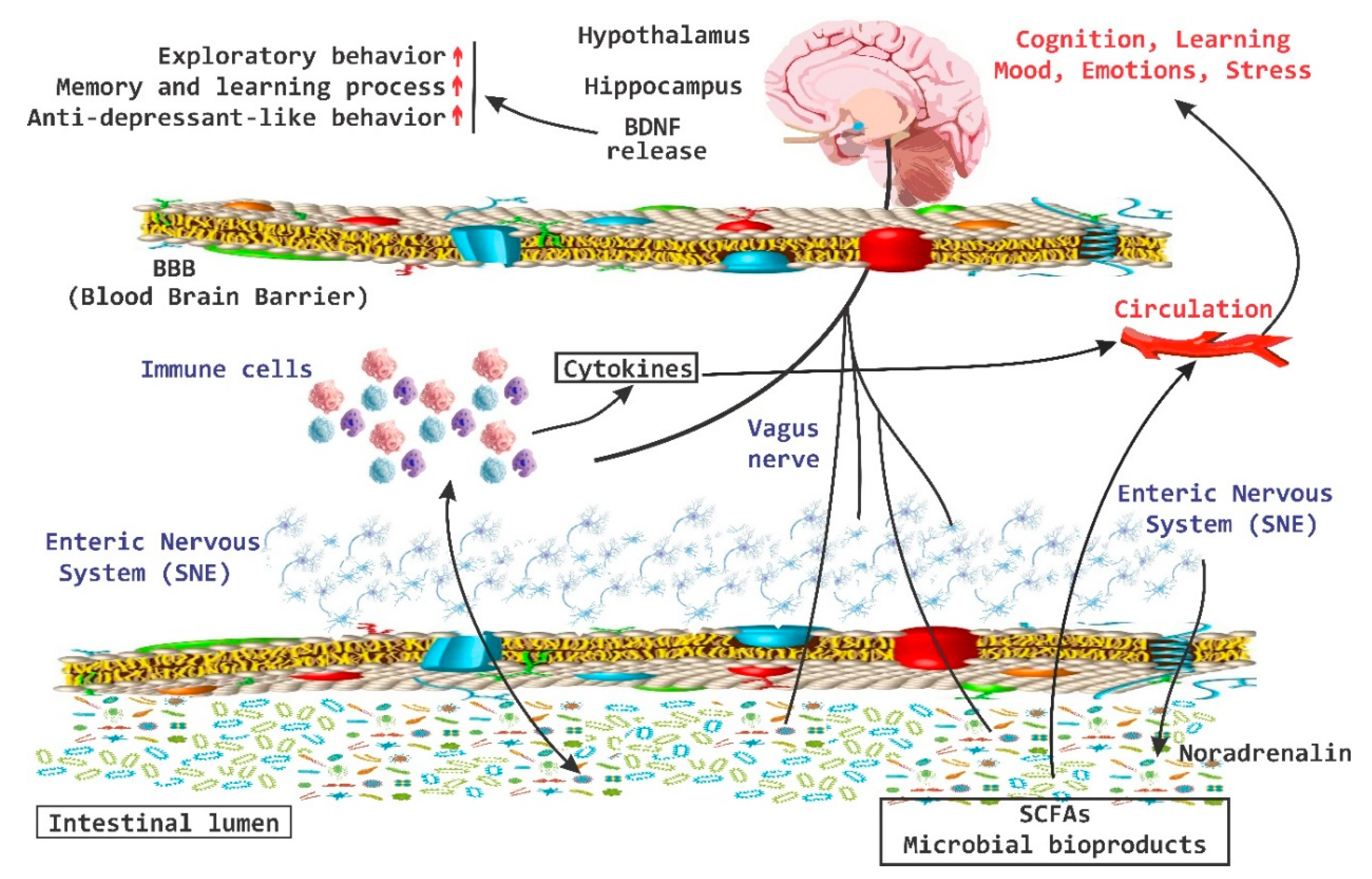