How to Prevent Loss of Muscle Mass and Strength among Older People in Neuro-Rehabilitation?

Stroke is the second leading cause of death worldwide but also of disability. Stroke induces certain alterations of muscle metabolism associated with gross muscle atrophy and a decrease in muscle function, leading to sarcopenia. The vast majority of stroke cases occur in adults over 65 years of age, and the prevalence is expected to massively increase in the coming years in this population. Sarcopenia is associated with higher mortality and functional decline. Therefore, the identification of interventions that prevent muscle alterations after stroke is of great interest. The purpose of this review is to carry out a systematic literature review to identify evidence for nutritional and pharmacological interventions, which may prevent loss of muscle mass in the elderly after stroke. The search was performed on Medline in December 2018. Randomized controlled studies, observational studies and case reports conducted in the last 20 years on post-stroke patients aged 65 or older were included. In total, 684 studies were screened, and eight randomized control trials and two cohort studies were finally included and examined. This review reveals that interventions such as amino acid supplementation or anabolic steroid administration are efficient to prevent muscle mass. Little evidence is reported on nutritional aspects specifically in sarcopenia prevention after stroke. It pinpoints the need for future studies in this particular population. View Full-Text
Keywords: stroke; muscle atrophy; sarcopenia; rehabilitation; elderly stroke; muscle atrophy; sarcopenia; rehabilitation; elderly
►▼ Show Figures 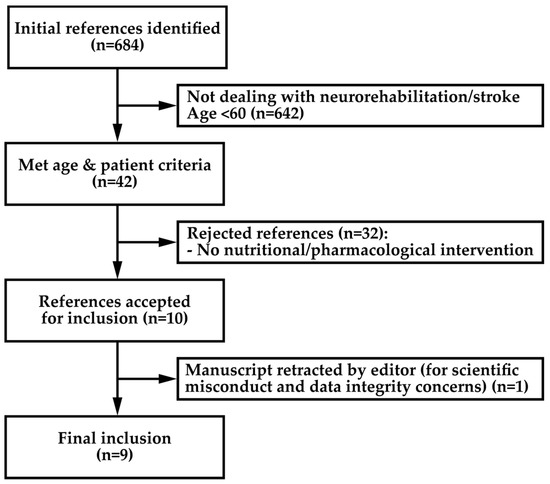