Glutamine as an Anti-Fatigue Amino Acid in Sports Nutrition

Glutamine is a conditionally essential amino acid widely used in sports nutrition, especially because of its immunomodulatory role. Notwithstanding, glutamine plays several other biological functions, such as cell proliferation, energy production, glycogenesis, ammonia buffering, maintenance of the acid-base balance, among others. Thus, this amino acid began to be investigated in sports nutrition beyond its effect on the immune system, attributing to glutamine various properties, such as an anti-fatigue role. Considering that the ergogenic potential of this amino acid is still not completely known, this review aimed to address the main properties by which glutamine could delay fatigue, as well as the effects of glutamine supplementation, alone or associated with other nutrients, on fatigue markers and performance in the context of physical exercise. PubMed database was selected to examine the literature, using the keywords combination “glutamine” and “fatigue”. Fifty-five studies met the inclusion criteria and were evaluated in this integrative literature review. Most of the studies evaluated observed that glutamine supplementation improved some fatigue markers, such as increased glycogen synthesis and reduced ammonia accumulation, but this intervention did not increase physical performance. Thus, despite improving some fatigue parameters, glutamine supplementation seems to have limited effects on performance. View Full-Text
Keywords: amino acid; muscle fatigue; central fatigue; performance; immune system; hydration amino acid; muscle fatigue; central fatigue; performance; immune system; hydration
►▼ Show Figures 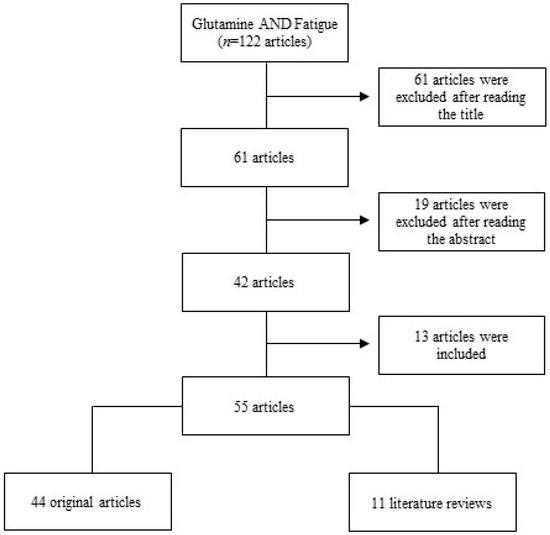