Zinc Intake and Status and Risk of Type 2 Diabetes Mellitus: A Systematic Review and Meta-Analysis
Previous Article in Journal

Reversing Type 2 Diabetes: A Narrative Review of the Evidence

Background: Type 2 diabetes (T2D) has long been identified as an incurable chronic disease based on traditional means of treatment. Research now exists that suggests reversal is possible through other means that have only recently been embraced in the guidelines. This narrative review examines the evidence for T2D reversal using each of the three methods, including advantages and limitations for each. Methods: A literature search was performed, and a total of 99 original articles containing information pertaining to diabetes reversal or remission were included. Results: Evidence exists that T2D reversal is achievable using bariatric surgery, low-calorie diets (LCD), or carbohydrate restriction (LC). Bariatric surgery has been recommended for the treatment of T2D since 2016 by an international diabetes consensus group. Both the American Diabetes Association (ADA) and the European Association for the Study of Diabetes (EASD) now recommend a LC eating pattern and support the short-term use of LCD for weight loss. However, only T2D treatment, not reversal, is discussed in their guidelines. Conclusion: Given the state of evidence for T2D reversal, healthcare providers need to be educated on reversal options so they can actively engage in counseling patients who may desire this approach to their disease. View Full-Text
Keywords: diabetes; diabetes reversal; bariatric surgery; very-low-calorie; low-carbohydrate diabetes; diabetes reversal; bariatric surgery; very-low-calorie; low-carbohydrate
►▼ Show Figures 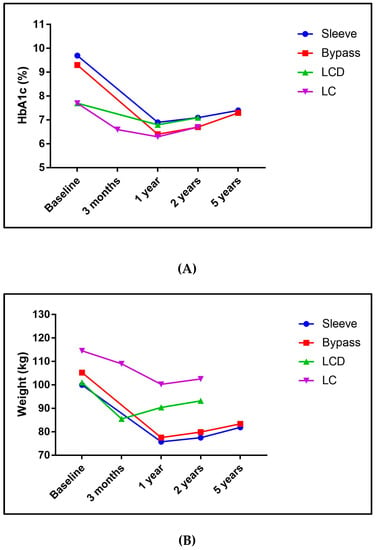