Palatability of Goat’s versus Cow’s Milk: Insights from the Analysis of Eating Behavior and Gene Expression in the Appetite-Relevant Brain Circuit in Laboratory Animal Models

The efficacy of pomegranate (Punica granatum) extract (PE) for improving performance and post-exercise recovery in an active population was equivocal in previous studies. In this study, a randomised, double-blinded, placebo-controlled, balanced, cross-over trial with two arms was conducted. Eligibility criteria for participants were as follows: male, amateur cyclist, with a training routine of 2 to 4 sessions per week (at least one hour per session). The cyclists (n = 26) were divided into treatment (PE) and placebo (PLA) groups for a period of 15 days. After physical tests, the groups were exchanged after a 14-day washout period. Exercise tests consisted of endurance bouts (square-wave endurance exercise test followed by an incremental exercise test to exhaustion) and an eccentric exercise drill. The objective was to assess the efficacy of PE in performance outcomes and post-exercise muscular recovery and force restoration after a prolonged submaximal effort. Twenty-six participants were included for statistical analysis. There was a statistically significant difference in total time to exhaustion (TTE)(17.66–170.94 s, p < 0.02) and the time to reach ventilatory threshold 2 (VT2)(26.98–82.55 s, p < 0.001), with greater values for the PE compared to the PLA group. No significant results were obtained for force restoration in the isokinetic unilateral low limb test. PE, after a prolonged submaximal effort, may be effective in improving performance outcomes at maximal effort and might help to restore force in the damaged muscles. View Full-Text
Keywords: pomegranate; exercise performance; sports nutrition; delayed onset muscle soreness; muscle recovery; antioxidants pomegranate; exercise performance; sports nutrition; delayed onset muscle soreness; muscle recovery; antioxidants
►▼ Show Figures 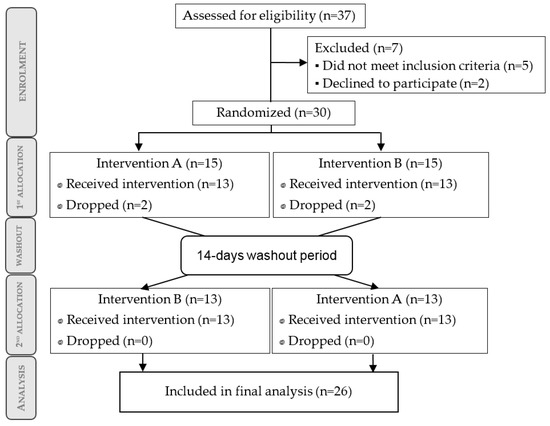