A low fat mass is associated with a good running performance. This study explores whether modifications in body composition predicted changes in running speed. We included people who underwent several measurements of body composition by bioelectrical impedance analysis between 1999 and 2016, at the “Course de l’Escalade”, taking place yearly in Geneva. Body composition was reported as a fat-free mass index (FFMI) and fat mass index (FMI). Running distances (men: 7.2 km; women: 4.8 km) and running times were used to calculate speed in km/h. We performed multivariate linear mixed regression models to determine whether modifications of body mass index, FFMI, FMI or the combination of FFMI and FMI predicted changes in running speed. The study population included 377 women (1419 observations) and 509 men (2161 observations). Changes in running speed were best predicted by the combination of FFMI and FMI. Running speed improved with a reduction of FMI in both sexes (women: ß −0.31; 95% CI −0.35 to −0.27, p < 0.001. men: ß −0.43; 95% CI −0.48 to −0.39, p < 0.001) and a reduction of FFMI in men (ß −0.20; 95% CI −0.26 to −0.15, p < 0.001). Adjusted for body composition, the decline in running performance occurred from 50 years onward, but appeared earlier with a body mass, FFMI or FMI above the median value at baseline. Changes of running speed are determined mostly by changes in FMI. The decline in running performance occurs from 50 years onward but appears earlier in people with a high body mass index, FFMI or FMI at baseline. View Full-Text
Keywords: bioelectrical impedance analysis; fat mass; fat-free mass; running performance bioelectrical impedance analysis; fat mass; fat-free mass; running performance
►▼ Show Figures 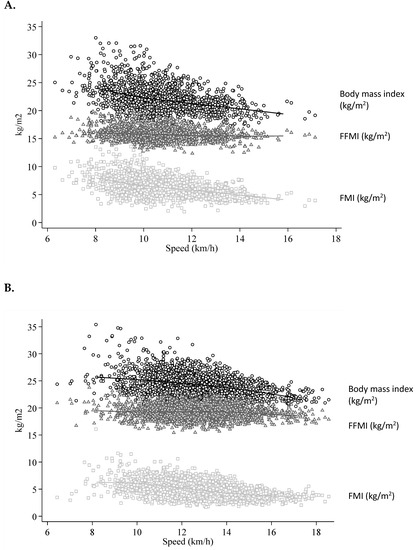