Epidemiological studies have identified an inverse relationship between the incidence of a range of common non-communicable diseases and the consumption of fruits and vegetables that contain valuable bioactive compounds; a relationship that is consistent with the principles of the Mediterranean diet [1,2,3,4]. Foods rich in polyphenols have attracted interest due to their beneficial effects on human health, with evidence of antioxidant [5,6], anti-cancer [7,8,9,10], cardio-protective and anti-inflammatory activities [11,12,13]. Fruits are used commonly for juice or pulp extraction, a process which generates large amounts of waste containing valuable bioactive compounds [14,15]. The recovery of these bioactive molecules and their reuse within agricultural, food, cosmetic and pharmaceutical industries supports the core principles of the “circular economy” [16]. This recently conceived economic model is based on sustainable processes at “zero waste” that we have already described in previous studies [17,18,19].
Punica granatum L., commonly known as pomegranate, is consumed worldwide as either fresh fruit or in the form of juice and is recognised for its antioxidant, antimicrobial, anti-inflammatory and anti-cancer health benefits [20,21,22,23]. Originally native to Iran, over time the fruit has gained increased popularity and are now produced in a number of countries including Tunisia, Turkey, Spain, Italy, Egypt, Morocco, United States, China, India, Argentina, Israel and the South Africa. The variety “Wonderful” is the most widely cultivated due to its high yield and quality [24]. The fruit consists of three main parts: the arils, the seeds and the peel, each contributing 40%, 10% and 50% of the total fruit weight, respectively. The arils contain discrete quantities of flavonoids, principally anthocyanins, which are responsible for the red colour of the juice. The seeds and seed oil contain high levels of polyunsaturated fatty acids. The peel, the main waste component of pomegranate juice production, is particularly rich of hydrolysable tannins, specifically punicalagins, which are multiple esters of gallic acid and glucose, widely known for their antioxidant and anti-inflammatory properties [25,26,27,28,29,30,31].
Several disorders related to the chronic inflammation of the gastrointestinal tract (GIT), including ulcerative colitis and Crohn’s disease are classified broadly as Inflammatory Bowel Disease (IBD) [32]. A range of genetic, immunological and environmental factors are thought to be responsible for the development of IBD and its incidence is increasing throughout the world [33]. Numerous studies have illustrated the imbalance of cytokines during acute and chronic inflammation and their role in the modulation of the immune response and resolution of inflammation. Un-regulated immune activation in the GIT drives chronic inflammation and disease [34]. Hence, immunomodulatory supplements that support GIT health are constantly being sought and polyphenols found in plant-based foods could be effective in this regard [35,36,37].
In this study, the anti-inflammatory effects of standardised pomegranate peel extracts (PPE) were investigated using an in vitro model where human colonic adenocarcinoma Caco-2 cells were stimulated with TNF and an ex vivo model using porcine colonic tissues stimulated with LPS. The effects were studied using non-cytotoxic concentrations of PPE on Caco-2 cell lines (1.0, 2.5, 5.0, 10 and 25 μg/mL). Caco-2 cells represent the epithelial layer of the small intestine, they have a functional resemblance to the colonic enterocytes and an ability to respond to pro-inflammatory stimuli; hence this in vitro system is a useful model of the human intestine with regard to screening potential bioactive compounds [37,38]. One caveat however, is that this in vitro model lacks the cellular heterogeneity present in the colon in vivo [39]; hence, to circumvent this limitation, ex vivo intestinal tissues explants were used as a validation model as they are informative with regard to physiological and immunological responses both under normal and challenged conditions [39,40]. The total RNA in porcine colonic explants remains intact for up to 3 h post-mortem, hence this ex vivo system can be used to explore and validate the effects of bioactive compounds on the transcriptome in the presence or absence of inflammatory stimulants [41].
The objective of this current study was to evaluate the anti-inflammatory effects of incremental PPE concentrations (1.0, 2.5, 5.0, 10 and 25 μg/mL) on an in vitro model using Caco-2 cells stimulated with TNF and ex vivo model using porcine colonic tissues stimulated with LPS. To the best of our knowledge, this paper describes for the first time the anti-inflammatory effects of PPE in an ex vivo porcine colonic model.

To evaluate the cytotoxic activity of PPE, the cells were plated into 96-well microplates at 1 × 106 cells/mL and maintained for 21 days until fully differentiated. After that, the media was replaced with different concentrations of PPE (1.0, 2.5, 5.0, 10, 25 µg/mL) and one aliquot of cells was treated with regular medium (control). The cell culture plates were incubated at 37 °C for 24 h. Cell viability was measured at the end of the exposure time, using an MTT (3-(4,5-dimethylthiazol-2-yl)-2,5-diphenyl tetrazolium bromide) assay, in the following way: all treatments were replaced with 100 μL of MTT solution (regular medium and MTT) to 0.5 mg/mL of final concentration and the plates were kept again in incubator for 3.5 h; after incubation, the supernatants were discarded and 100 μL of dimethyl sulfoxide (DMSO) were added to each well; plates were additionally incubated for 45 min and subsequently read at 595 nm by microplates reader, absorbance data were recorded.

For CXCL8 detection from Caco-2 cells, the cells were plated in a 24 well plate at 106 cells mL−1 of density and maintained for 21 days until fully differentiated. The media was changed on alternative days. The cells used in this study were between the 53rd to 65th passages. After 21 days, an aliquot of cells was treated with DMEM and 10 nM Dexamethasone (Dexa) (Sigma-Aldrich) a commercially available anti-inflammatory agent; another aliquot was treated with only DMEM (Control); the other cells were treated with DMEM containing increasing concentrations of PPE (1.0, 2.5, 5.0, 10, 25 µg/mL). All treatments contained 10 nM TNF (Sigma-Aldrich) with the aim of inducing a pro-inflammatory response. After 24 h of treatment, supernatants were removed and CXCL8 concentrations were measured using the Human CXCL8 ELISA kit (R&D Systems Europe, Ltd. Abingdon, UK).

Six 38 day-old pigs were sacrificed and colonic tissues were dissected and washed using phosphate buffer saline (PBS). From each colonic tissue, sections of about 1.0 cm2 of tissue were taken and the smooth muscle was stripped from the overlying epithelium and discarded. For each animal, one section was immediately placed in 15 mL of RNAlater® (Applied Biosystems, Foster City, CA, USA) as time-zero control (T0) and stored at room temperature. Another tissue section was incubated in DMEM (Control) and further tissue sections were incubated in different wells, each one containing DMEM with increasing concentrations of PPE (1.0, 2.5, 5.0, 10, and 25 µg/mL). To induce an inflammatory response, each treatment, with the only exception of T0, contained 10 µg/mL of LPS (Sigma Aldrich). All tissue explants were incubated at 37 °C for 3 h and following this, the supernatants were stored at −20 °C, surplus media was removed from the tissue and the tissue was stored in 15 mL of RNAlater® overnight at room temperature. The RNAlater® was then removed and the samples stored at −80 °C.

The relative expression of a panel of nine cytokines were evaluated using QPCR: interleukin 1 alpha (IL1A), interleukin 1 beta (IL1B), interleukin 6 (IL6), interleukin 8 (CXCL8), interleukin 10 (IL10), interleukin 17A (IL17A), interferon gamma (IFNG), Tumor Necrosis Factor alpha (TNF) and Transforming Growth Factor beta 1 (TGFB1). Two endogenous controls, β2 microglobulin (B2M) and Beta-actin (ACTB) were used to normalize data [39]. Primers used for these targets are described in Table 1. Primer efficiencies were determined using a serial dilution (1:4 dilution series over 7 points) of a cDNA pool from all the experimental samples and were in the range of 90 to 110%. All primers were designed using Primer Express™ software and were synthesised by MWG Biotech (Milton Keynes, UK). Assays were carried out using 96 well fast optical plates on a 7500HT ABI Prism Sequence Detection System (PE Applied Biosystems, Foster City, CA, USA) using Fast SYBR Green PCR Master Mix (Applied Biosystems). All reactions were performed in duplicate to a final volume of 20 μL containing 10 μL Fast SYBR PCR Master mix, 1 μL forward and reverse primer mix (100 μM), 8 μL nuclease free water and 1 μL of cDNA. The thermal cycling conditions were 95 °C for 10 min followed by 40 cycles of 95 °C for 15 s and 65 °C for 1 min followed by a dissociation curve analysis to confirm specificity.
The stability of the reference genes and normalisation factors (NF) were calculated using the qbase+ package (Biogazelle, Gent, Belgium) based on the geNorm algorithm. Briefly, geNorm calculated the stability measure M for a reference gene as the average pairwise variation (V) for that gene with all other tested reference genes. A Vn/n+1 value was calculated for every comparison between two consecutive numbers (n and n+1) of candidate reference genes. Following the stepwise exclusion of the least stable reference genes, M values were re-calculated and the stability series obtained. Finally, the normalisation factor was calculated from the two most stable genes (B2M, ACTB), as the geometric mean of the most stable reference genes, and the normalised relative quantity (RQ) of the target genes is obtained which is an expression of the ratio between the RQ and the sample specific NF. The basic formula for relative quantification (RQ = 2^ddCt) assumes 100% amplification efficiency (E = 2).

All data were normalised and analysed as a complete randomised design experiment using one way ANOVA function of GraphPad PRISM software. Spearman’s rank correlation analysis was performed to correlate the expression of the selected panel of cytokine expression post LPS challenge. Probability values of p <0.05 were used as the criterion for statistical significance. All results are reported as square means ± standard error of the means.

3.3.1. CXCL8 Concentrations in the Supernatant

The anti-inflammatory effects of PPE (1.0 µg/mL to 25 µg/mL) on freshly excised ex vivo colonic tissues co-stimulated with LPS are presented in Figure 3B. The CXCL8 concentrations in the supernatants decreased with 5.0 and 25 μg/mL of PPE, with a 59.3% (p < 0.01) and 54.5% (p < 0.01) reduction compared to the control, respectively. There were no differences observed with the other PPE concentrations tested (p > 0.05).

3.3.2. Effect of LPS on Cytokine Expression in Porcine Colonic Tissues

The effect of increasing concentrations of PPE on LPS challenged porcine colonic tissue explants is presented in Figure 5. There were no differences observed in the expression of IL10, IL17A and IFNG between control and PPE treated tissues (Figure 5B). The co-treatment of LPS challenged porcine tissues with 5.0 μg/mL of PPE was associated with the highest reduction of IL1A by 54.3% (p < 0.05), IL6 by 70.6% (p < 0.01) and CXCL8 by 62.2% (p < 0.05) compared to the challenged control (Figure 5A). Similarly, co-treatment of LPS challenged tissue with 2.5 μg/mL of PPE was associated with a 67.9% (p < 0.05) reduction of IL6 (Figure 5A).
A heat map representing the correlations (R2) of a selected panel of cytokines in ex vivo porcine colonic tissues post LPS challenge and co-treatment with PPE is presented in Figure 6. The expression of cytokine IL1A is positively correlated to IL1B and TNF (p < 0.05). Similarly, the expression of CXCL8 is positively correlated to IL6 expression (p < 0.001).

This study highlights the anti-inflammatory potential of a water extract of pomegranate peel (PPE). PPE reduced the secretion of the pro-inflammatory cytokine CXCL8 in TNF stimulated Caco-2 cells. In addition, PPE reduced CXCL8 secretion as well as suppressing the gene expression of pro-inflammatory cytokines (IL1A, IL6 and CXCL8) from LPS challenged colonic tissues. These results suggest that PPE has the potential to be used as a functional food ingredient with applications in the maintenance of gastrointestinal tract homeostasis. While the data presented in this study have been generated in in vitro and ex vivo environments, they highlight the potential value of further studies exploring the prevention of inflammatory conditions of the gastrointestinal tract, such as IBD, with pomegranate extracts rich in punicalagins.

This research was funded by MIUR (Ministry for Education, University and Research) with the financial support Law 232/216, Departments of Excellence.

The authors wish to thank SIVAM Company (Casalpusterlengo, LO) that financed part of the research. 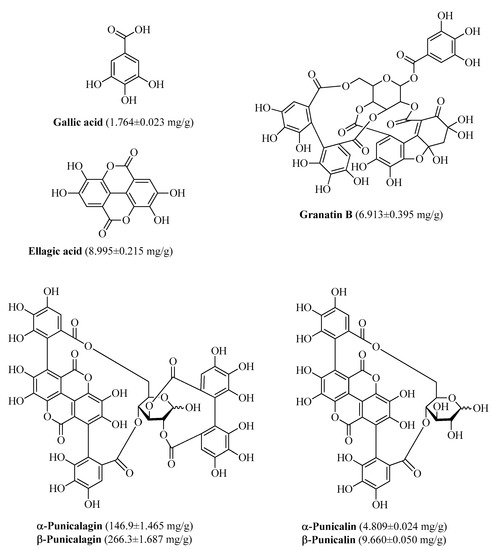 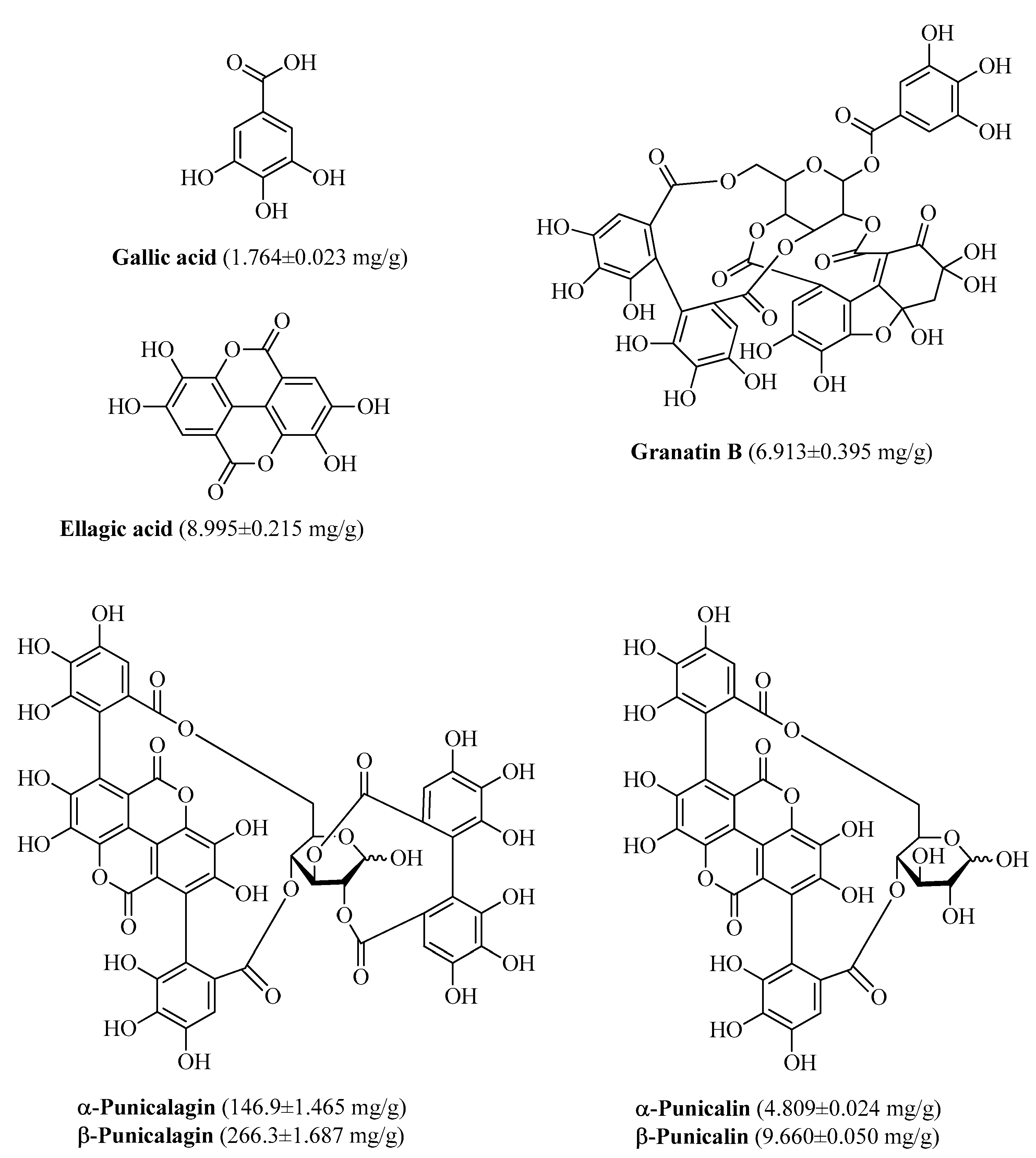