A Review of the Role of Green Tea (Camellia sinensis) in Antiphotoaging, Stress Resistance, Neuroprotection, and Autophagy

Tea is one of the most widely consumed beverages worldwide, and is available in various forms. Green tea is richer in antioxidants compared to other forms of tea. Tea is composed of polyphenols, caffeine, minerals, and trace amounts of vitamins, amino acids, and carbohydrates. The composition of the tea varies depending on the fermentation process employed to produce it. The phytochemicals present in green tea are known to stimulate the central nervous system and maintain overall health in humans. Skin aging is a complex process mediated by intrinsic factors such as senescence, along with extrinsic damage induced by external factors such as chronic exposure to ultraviolet (UV) irradiation—A process known as photoaging—Which can lead to erythema, edema, sunburn, hyperplasia, premature aging, and the development of non-melanoma and melanoma skin cancers. UV can cause skin damage either directly, through absorption of energy by biomolecules, or indirectly, by increased production of reactive oxygen species (ROS) and reactive nitrogen species (RNS). Green tea phytochemicals are a potent source of exogenous antioxidant candidates that could nullify excess endogenous ROS and RNS inside the body, and thereby diminish the impact of photoaging. Several in vivo and in vitro studies suggest that green tea supplementation increases the collagen and elastin fiber content, and suppresses collagen degrading enzyme MMP-3 production in the skin, conferring an anti-wrinkle effect. The precise mechanism behind the anti-photoaging effect of green tea has not been explored yet. Studies using the worm model have suggested that green tea mediated lifespan extension depends on the DAF-16 pathway. Apart from this, green tea has been reported to have stress resistance and neuroprotective properties. Its ROS scavenging activity makes it a potent stress mediator, as it can also regulate the stress induced by metal ions. It is known that tea polyphenols can induce the expression of different antioxidant enzymes and hinder the DNA oxidative damage. Growing evidence suggests that green tea can also be used as a potential agent to mediate neurodegenerative diseases, including Alzheimer’s disease. EGCG, an abundant catechin in tea, was found to suppress the neurotoxicity induced by Aβ as it activates glycogen synthase kinase-3β (GSK-3β), along with inhibiting c-Abl/FE65—the cytoplasmic nonreceptor tyrosine kinase which is involved in the development of the nervous system and in nuclear translocation. Additionally, green tea polyphenols induce autophagy, thereby revitalizing the overall health of the organism consuming it. Green tea was able to activate autophagy in HL-60 xenographs by increasing the activity of PI3 kinase and BECLIN-1. This manuscript describes the reported anti-photoaging, stress resistance, and neuroprotective and autophagy properties of one of the most widely known functional foods—green tea. View Full-Text
Keywords: photoaging; green tea; antioxidant; neuroprotective; DAF-16; polyphenols; autophagy photoaging; green tea; antioxidant; neuroprotective; DAF-16; polyphenols; autophagy
►▼ Show Figures 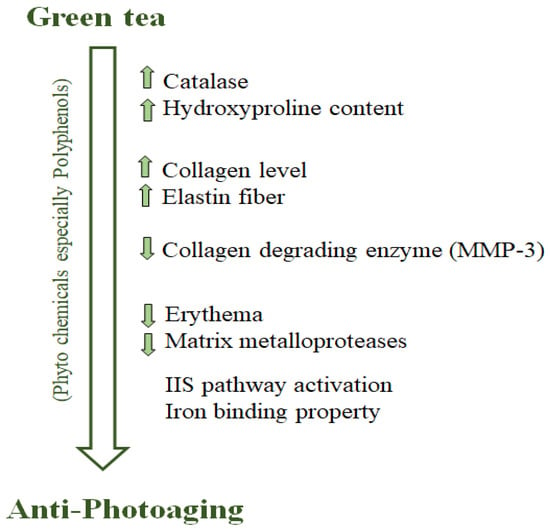