When administered to rats receiving a high-fat diet (HFD), 3,5-diiodo-L-thyronine (3,5-T2) [at a dose of 25 μg/100 g body weight (BW)] is known to increase energy expenditure and to prevent HFD-induced adiposity. Here, we investigated which cellular and molecular processes in visceral white adipose tissue (VAT) contributed to the beneficial effect of 3,5-T2 over time (between 1 day and 4 weeks following administration). 3,5-T2 programmed the adipocyte for lipolysis by rapidly inducing hormone sensitive lipase (HSL) phosphorylation at the protein kinase A-responsive site Ser563, accompanied with glycerol release at the 1-week time-point, contributing to the partial normalization of adipocyte volume with respect to control (N) animals. After two weeks, when the adipocyte volumes of HFD-3,5-T2 rats were completely normalized to those of the controls (N), 3,5-T2 consistently induced HSL phosphorylation at Ser563, indicative of a combined effect of 3,5-T2-induced adipose lipolysis and increasing non-adipose oxidative metabolism. VAT proteome analysis after 4 weeks of treatment revealed that 3,5-T2 significantly altered the proteomic profile of HFD rats and produced a marked pro-angiogenic action. This was associated with a reduced representation of proteins involved in lipid storage or related to response to oxidative stress, and a normalization of the levels of those involved in lipogenesis-associated mitochondrial function. In conclusion, the prevention of VAT mass-gain by 3,5-T2 occurred through different molecular pathways that, together with the previously reported stimulation of resting metabolism and liver fatty acid oxidation, are associated with an anti adipogenic/lipogenic potential and positively impact on tissue health. View Full-Text
Keywords: 3,5-diiodo-L-thyronine; visceral white adipose tissue; ATGL; hormone sensitive lipase; lipolysis; proteomics 3,5-diiodo-L-thyronine; visceral white adipose tissue; ATGL; hormone sensitive lipase; lipolysis; proteomics
►▼ Show Figures 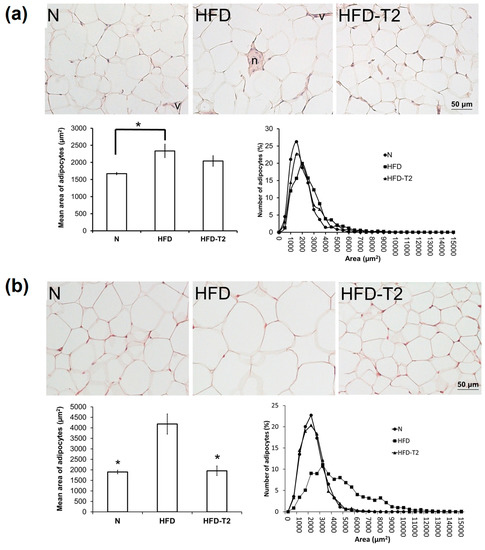