Evaluation of Dietary Approaches for the Treatment of Non-Alcoholic Fatty Liver Disease: A Systematic Review

Dietary Carbohydrates and Insulin Resistance in Adolescents from Marginalized Areas of Chiapas, México

This cross-sectional study was conducted within the framework of a prospective Cohort Study of newborns from the Tzotzil-Tzeltal and Selva regions of Chiapas, México. A full description of the cohort has been already published [13]. In brief, a cohort study of 2184 newborns from three public hospitals in Chiapas was started in 2003 [14]. The initial assessment included sociodemographic data, anthropometric measurements of the newborn and gynecological history of the mother. In the period from 2017 to 2018, follow-up interviews were applied to a subsample of 303 adolescents randomly selected from the original cohort [13]. Household surveys were performed by trained personnel to collect sociodemographic, clinical and anthropometric data. Dietary intake was assessed using 24 h dietary recalls and food frequency questionnaires. Fasting blood samples were also collected. Written informed consent was obtained from all participants and their parents prior to the interview. This study was conducted in accordance with the Declaration of Helsinki and the protocol was approved by the Research Ethics Committee of El Colegio de la Frontera Sur (CEI-O-076/16).

For this analysis, we excluded adolescents with missing values of fasting serum glucose (n = 48) and insulin levels (n = 3). We used Goldberg’s cut-off2 criterion [15,16] to identify diet reports of poor validity. Basal metabolic rate (BMR) was estimated according to sex, age, weight and height using the Institute of Medicine predictive equations [17]. The reported energy intake (EIrep) as a multiple of BMR (EIrep: BMR) was compared to the physical activity level (PAL) using 95% confidence limits according to Black [15]. The 95% confidence limits of agreement were calculated considering the average within-subject variation in energy intake (23%), between-subject variation in PAL (15%) and within-subject variation in estimated BMR (7.5% for males and 9.3% for females) [15]. Due to the absence of an objective measure of physical activity in our study, a sedentary PAL (1.55) was used for all subjects [15]. Thus, lower and upper cut-off values were defined for males (EIrep: BMR <0.88 and >2.74) and females (EIrep: BMR <0.87 and >2.77). The latter values are similar to those found in a large sample of children and adolescents from the USA [18]. Adolescents with an estimated EIrep: BMR outside the 95% confidence limits were classified as implausible reporters of energy intake (n = 35) and were excluded from the analysis. Therefore, the final sample included 217 adolescents (Figure 1).

Trained dietitians administered a single 24 h recall to collect food intake [13]. Support materials were used to assess the portion size consumed (examples of volumes and household measures). Food intake reported in household measures was converted to g/day. Energy (kcal/day) and nutrient intakes (g/day) were calculated by multiplying the portion size of the food consumed (g/day) per grams of nutrient content of the food (g/g). The nutrient data bank was updated using the Nutrient Composition Tables for Mexican foods [19], food composition tables compiled by the National Institute of Public Health of México [20] and the USDA food composition databases [21].

Blood was drawn from the antecubital vein, after a fasting period of 12 h. Serum glucose was determined by enzymatic photometric tests (Glucose GOD FS, DiaSys Diagnostic Systems GmbH) in an automated analyzer (Vitalab Selectra E, Vitalab Scientific). Serum insulin levels were determined by an immunoassay method (Adaltis Diagnostics) using an Eclectica analyzer (Adaltis Diagnostics). The cut-off point of 14.38 was considered for abnormal insulin levels since it has been proven to have an adequate performance to diagnose metabolic syndrome for a similar population to our sample [27].
The homeostasis model assessment of insulin resistance (HOMA-IR) was calculated using the formula [28]: [fasting insulin (µU/mL)*fasting glucose (mg/dL)]/405. Two validated cut-off points were used to diagnose insulin resistance: HOMA-IR > 3.16 as proposed by Keskin et al. in 2005, which has been widely used in epidemiological studies [29], and HOMA-IR > 2.97 proposed by Piña-Aguero et al. in 2018 as a valid cut-off for insulin resistance in Mexican adolescents [27].

Weight (kg) was measured using scales (TANITA Corporation, Tokyo, Japan) and height (cm) was measured using stadiometers (Seca GmbH & co., Hamburg, Germany) with a precision of 100 g and 1 mm, respectively. Body mass index (BMI) was calculated as weight (kg) divided by height squared (m)2. BMI z-scores were estimated with the WHO AnthroPlus software [30]. Weight status was categorized as: underweight [(z-score of BMI for age ≤ −2 standard deviations (SD)], normal weight (−1.9 to +1 SD), overweight (>+1 SD) or obese (>+2 SD). Body fat percentage (%BF) was estimated using BIA scales (TANITA Corporation, Tokyo, Japan). Excess of body fat was defined as follows: ≥30% BF for females and ≥25% BF for males, since these thresholds have been associated with alterations in cardiovascular disease risk factors in children and adolescents [31]. Waist circumference was determined with a measuring tape with a precision of 1 mm (Seca GmbH & Co. KG., Hamburg, Germany). Abdominal obesity was defined using the International Diabetes Federation cut-off points for age (Waist circumference ≥ 90 cm for males and ≥80 cm for females) [32]. Furthermore, waist to height ratio (WHtR) was calculated as waist (cm) divided by height (cm) and the cut-off point > 0.5 units was used since it correlates well with metabolic abnormalities in Mexican youth [33]. All measurements were taken wearing light clothes, barefoot, in accordance with the International Society for the Advancement of Kinanthropometry procedures [34].

The authors want to thank the study participants for their collaboration and to all the personnel who assisted in fieldwork, specially to the group of dietitians from Universidad de Ciencias y Artes de Chiapas, Universidad del Sureste and Instituto de Estudios Superiores de Chiapas. We would like to thank Mayra Vazquez-Gomez and Neyfi Samanta Montejo Perez for the special assistance in processing nutrient composition data. 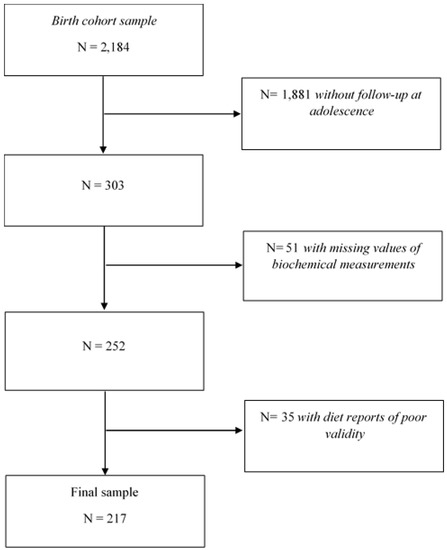 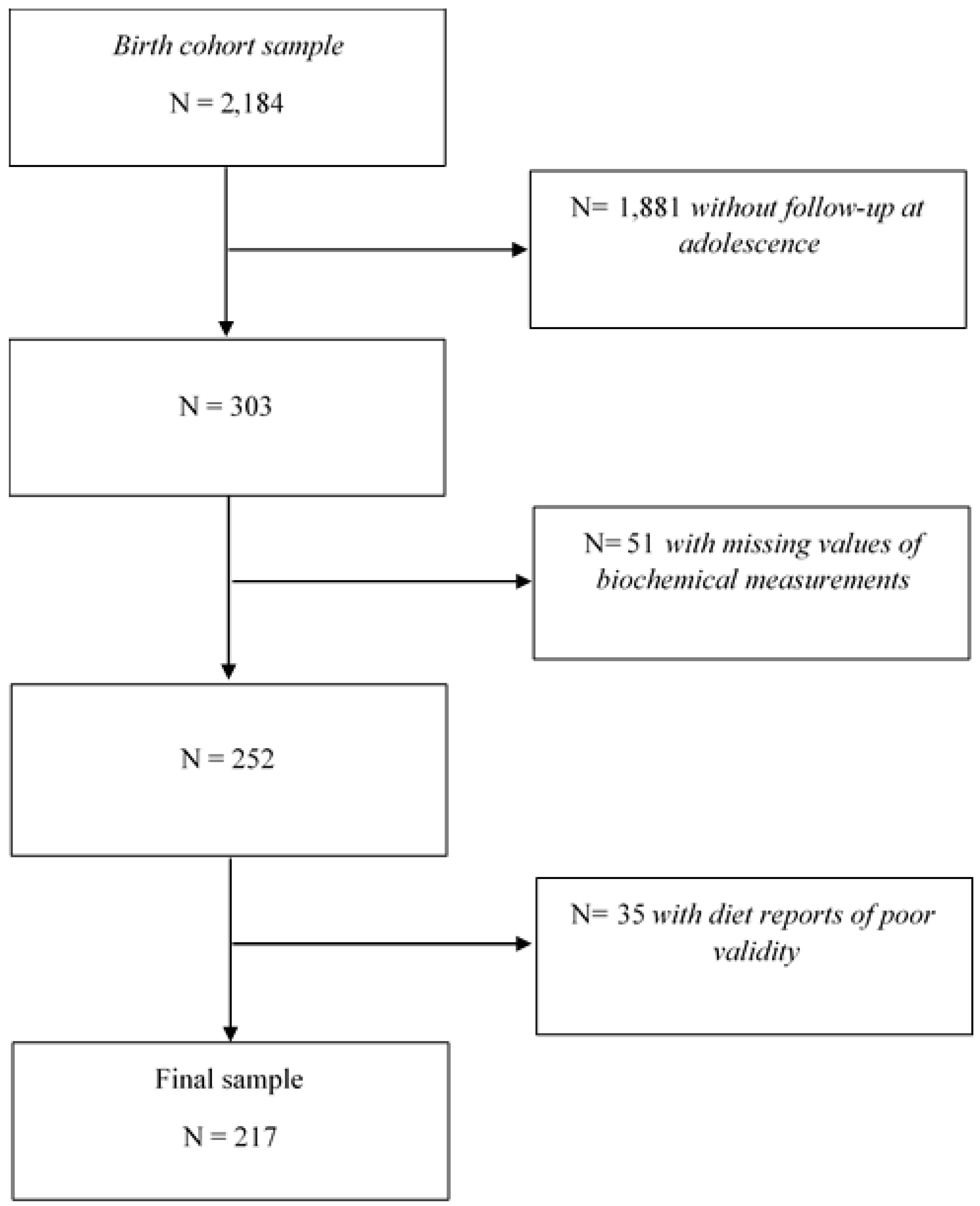