Variability of Water-Soluble Forms of Choline Concentrations in Human Milk during Storage, after Pasteurization, and among Women
Previous Article in Journal

Extracellular acidity has been implicated in enhanced malignancy and metastatic features in various cancer cells. Gastric cancer cell lines (AGS and SNU601) maintained in an acidic medium have increased motility and invasiveness. In this study, we investigated the effect of ellagic acid, a plant-derived phenolic compound, on the acidity-promoted migration and invasion of gastric cancer cells. Treating cells maintained in acidic medium with ellagic acid inhibited acidity-mediated migration and invasion, and reduced the expression of MMP7 and MMP9. Examining regulatory factors contributing to the acidity-mediated invasiveness, we found that an acidic pH increased the expression of COX1 and COX2; importantly, expression decreased under the ellagic acid treatment. The general COX inhibitor, sulindac, also decreased acidity-mediated invasion and expression of MMP7 and MMP9. In addition, acidity increased the mRNA protein expression of transcription factors snail, twist1, and c-myc; these were also reduced by ellagic acid. Together, these results suggest that ellagic acid suppresses acidity-enhanced migration and invasion of gastric cancer cells via inhibition of the expression of multiple factors (COX1, COX2, snail, twist1, and c-myc); for this reason, it may be an effective agent for cancer treatment under acidosis.
Keywords: extracellular acidity; ellagic acid; invasion extracellular acidity; ellagic acid; invasion

Gastric cancer (GC) is one of the most common cancers. The rate of surgical removal of primary cancer is very high, but a great risk comes from the fact that many patients are diagnosed after the tumor has invaded and spread to other parts of the body. In order to eradicate cancer cells, a high dose of medication is required, which is often accompanied by toxic side effects. Inhibition of metastasis can be a more effective strategy to control the progression of cancer. Extensive studies have been conducted to understand the regulatory mechanisms involved in tumor motility, invasiveness, and metastasis. Recently, metabolic parameters of tumor tissue, such as extracellular acidity, have been suggested to be linked to these events [1,2].
Due to active aerobic and anaerobic glycolysis, solid tumors inevitably form an acidic extracellular environment. Such extracellular acidity is a critical factor driving chemoresistance as well as malignant transformation of tumor cells [3,4]. The role of extracellular acidity in promoting invasiveness and metastasis has been demonstrated in human glioma, melanoma, and prostate cancer cells [4,5,6]. Acidity was shown to modulate the expression of multiple oncogenes and EMT-related transcription factors, such as NFkB, HIF2α, and COX2 [7,8], causing the epithelial properties of tumor cells to switch to a more mesenchymal-like phenotype [9]. A low-pH environment triggers the loss of E-cadherin expression in melanoma cells, and tumor cells primed at acidic pH have an increased adherence to the surface at normal pH in vitro and a higher metastatic potential in vivo [10,11], implicating the role of acidity in the migration of tumor cells from the original acidic tumor tissue to another non-tumor site. Therefore, treatment of tumors exposed to an acidic environment appears to be an important issue. Considerable attempts have been made to overcome adverse effects caused by acidic environment with strategies such as the use of proton pump inhibitors that block release of cellular proton into extracellular spaces, but the results have not been as successful as expected. Thus, it is imperative to find agents that prevent acidity-mediated malignancy, the activity of which is not inhibited by extracellular acidity.
Recently, use of natural medicines has been attracting more attention because of long-established medicinal effects and widely recognized safety. Numerous natural compounds have been extensively examined over the past several decades for their potential in cancer prevention and treatment [12]. Ellagic acid is one of naturally occurring phenolic compounds that has recently received considerable attention due to its diverse pharmacological activities, including antioxidant, anti-inflammatory, and anticancer effects [13]. Ellagic acid is contained in ellagitannins, mainly present in vegetables, nuts, and fruits such as raspberries and pomegranates. Among the various beneficial pharmacological activities of ellagic acid, the capacity to prevent several types of cancers is of particular importance. Ellagic acid and ellagic acid-rich foods have shown preventive and therapeutic effects against multiple types of cancers including colorectal cancer, esophageal cancer, breast cancer, prostate cancer, leukemia, and lymphoma [13,14,15]. The anticancer effect of ellagic acid has shown to be mainly mediated through its antiproliferative and pro-apoptotic actions; however, there are also studies indicating that EA inhibits migration and invasion of prostate cancer cells and bladder cancer cells by inhibiting protease activity or reducing the expression of PD-L1 and VEGFR-2 [16,17].
Here, we examined the potential of ellagic acid as an anti-invasive agent for gastric cancer cells exposed to an acidic environment. We used AGS and SNU601 GC cell lines maintained under acidic pH culture condition and assessed the effect of ellagic acid on their acidity-promoted invasive activity and the mechanisms involved.

To assay cell invasiveness, Matrigel-coated transwell chambers (Corning Costar) were used. Equal numbers of cells maintained in pH 7.4 or pH 6.5 were suspended in RPMI of each pH condition containing 1% FBS. Approximately 200 μL of the cell suspension was added to the upper portion of the insert, and medium containing 5% FBS was added to the lower portion of the inset. After 8 h (for AGS) and 18 h (for SNU601) of incubation at 37 °C in 5% CO2, noninvasive cells were removed from the upper surface of the transwell membrane with a cotton swab, and the invaded cells on the lower layer surface were fixed in 4% formaldehyde and stained with crystal violet solution. The numbers of invaded cells were counted or imaged under high-power (×200) microscope magnification (Olympus). For the migration assay, cells incubated at pH 7.4 and pH 6.5 were sampled in the same manner as above and grown in 24-well plates in growth medium. After overnight culture, the middle of the cell surface was scraped with a micropipette tip to make a wound of constant width. Debris was washed out with PBS, and the wound closures were monitored and photographed at 6 h (AGS cells) and 18 h (SNU601 cells) under the microscope (× 100, Olympus). Migration distance was calculated applying the software program HMIAS-2000.

The EZ-cytox viability assay was performed following the manufacturer’s protocol. Briefly, cells were plated in wells of a 24-well plate at a density of 5–8 × 104 cells/well, cultured for 24 h, and then incubated in the growth medium with or without ellagic acid for 48 h. The EZ-cytox solution (Daeillab, Korea) was added to the wells and incubated at 37 °C in a CO2 incubator for the last 2 h of incubation, and the plates were read using an enzyme-linked immunosorbent assay plate reader at 450 nm. The absorbance of the untreated cells was set as 100%, and cell survival was expressed as a percentage of this value.

Real-time PCR was performed with the Light Cycler 2.0 (Roche) using the Fast Start DNA Master SYBR Green I Kit (Roche). For verification of the correct amplification product, PCR products were analyzed on a 2% agarose gel stained with ethidium bromide. The sequences of the primers were designed as follows: for β-actin, 5′-GACTATGACTTAGTTGCGTTA-3′ and 5′-GCCTTCATACATCTCAAGTTG-3′, for snail, 5′-GGCTCCTTCGTCCTTCT-3′ and 5′-GGCTGAGGTATTCCTTGTT-3′, for twist1, 5′-CGGGAGTCCGCAGTCTTA-3′ and 5′-CTGGTAGAGGAAGTCGATGT-3′, for c-myc, 5′- GCTTTATCTAACTCGCTGTAGTAAT-3′ and 5′- GCTGCTATGGGCAAAGTTTC-3′. Primers of MMP7 (P310408) and MM9 (P323207) were purchased from Bioneer. PCR was conducted at 95 °C for 10 min, followed by 45 cycles of 95 °C for 15 seconds, 60 °C for 5 seconds, and 72 °C for 7 seconds. Melt curve analysis was performed to confirm that a single product was present. Negative controls without template were included in each run. Data were analyzed using Light Cycler software version 4.0 (Roche, Switzerland). The 2ΔΔCt method was used for analysis of relative gene expression.

For the RNAi experiment, siRNAs of snail, twist1, and c-myc and a scrambled siRNA control were purchased from Bioneer (Daejeon, Korea). Cells were individually transfected with siRNA oligonucleotides using an Amaxa™ Transfection System (Basel, Switzerland) and grown for 48 h in the acidic pH medium.

Tumor cell migration and invasion are critical events in the process of cancer metastasis. In this study, we first evaluated migratory behavior of AGS gastric cancer cells under normal and acidic pH conditions. Cells maintained in pH 7.4 or pH 6.5-adjusted medium were plated, and motility was detected by wound healing assay. When observed after 6 h, the cells cultured in pH 6.5 medium exhibited higher migration than cells cultured in normal pH medium (Figure 1A). We then assessed the effect of acidic pH condition on invasive ability of AGS and SNU601 cells. The same numbers of cells maintained at pH 7.4 and pH 6.5 were seeded on the inner wells of matrigel-coated transwell plates, and cells infiltrating into downward were detected. Higher numbers of cells cultured at pH 6.5 passed through matrigel than cells cultured at pH 7.4 (Figure 1B). Therefore, acidic conditions may trigger a more migratory and invasive phenotype in gastric cancer cells.

3.3. EA Decreases Induction of COX1 and COX2, Which Are Involved in Acidity-Promoted GC Invasion

This study suggests that extracellular acidity plays a role in strongly promoting invasion in gastric cancer cells, and that ellagic acid can be a useful agent in acidic microenvironments for its ability to suppress the expression of multiple malignance-associated genes including COX1, COX2, c-myc, snail, and twist1.

S.I.H. designed and wrote the manuscript. S.-C.L. and H.H. performed the experiments and analyzed the data. S.I.H. and S.-C.L. reviewed and edited the manuscript.

We thank Jeong-Eun Choi and Mi-rae Lee for their excellent technical assistance. 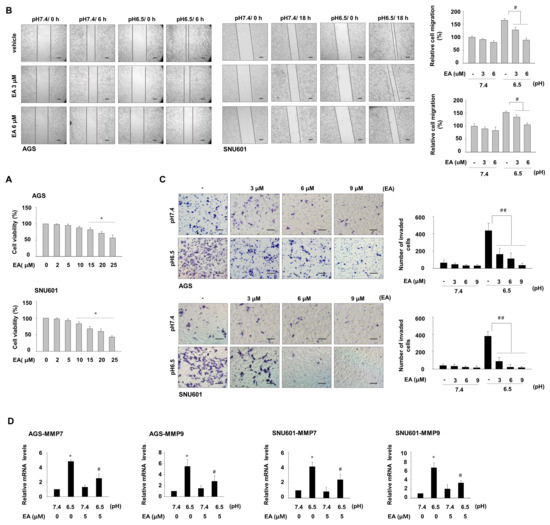 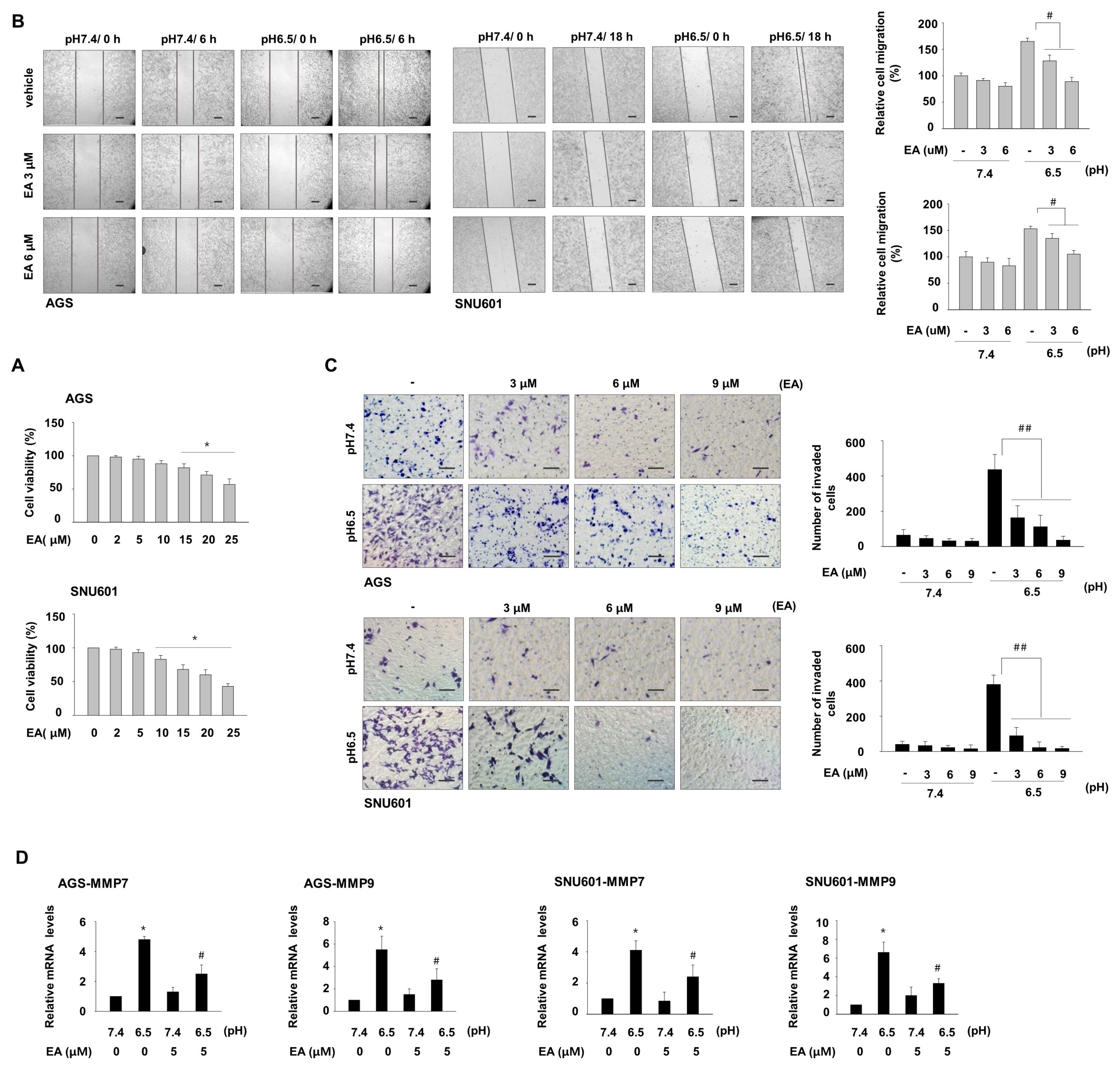 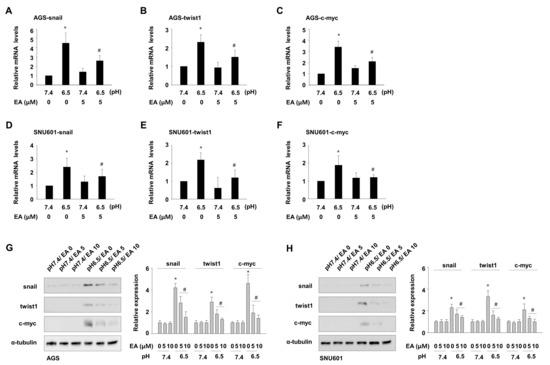 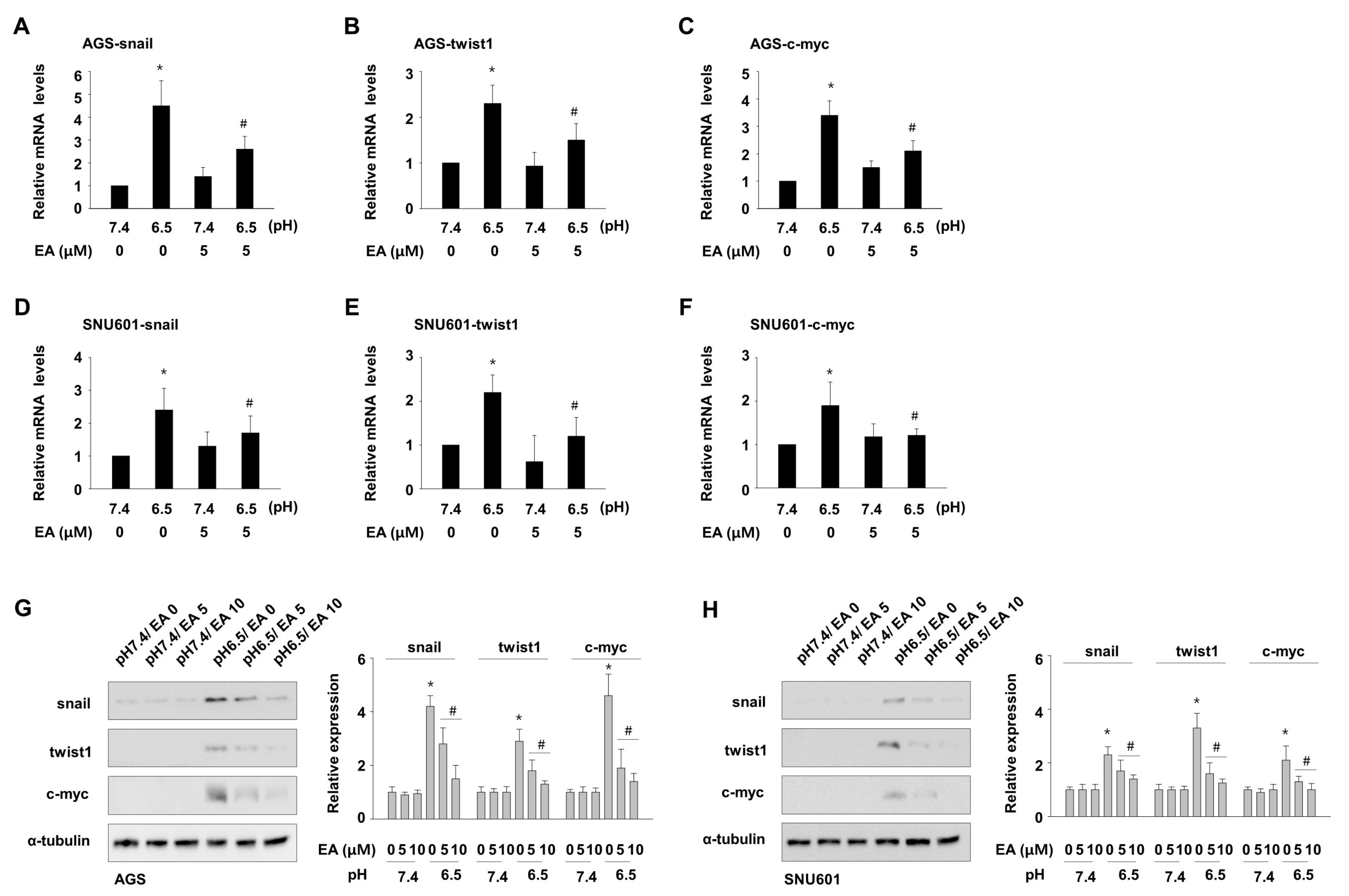