The Effects of the Dietary Approaches to Stop Hypertension (DASH) Diet on Metabolic Syndrome in Hospitalized Schizophrenic Patients: A Randomized Controlled Trial

We aimed to assess the association between chili consumption and kidney function and chronic kidney disease (CKD). Data from 8429 adults attending the China Health and Nutrition Survey were used. Chili intake was assessed using a 3 day, 24 h food record in combination with household food inventory between 1991 and 2009. CKD was defined as an estimated glomerular filtration rate (eGFR) of <60 mL/min/1.73 m2, as measured in 2009. Logistic regression was used to assess the association. Of the 8429 participants, 1008 (12.0%) fit the definition of CKD. The prevalence of CKD was 13.1% in non-consumers of chili and 7.4% among those with chili intake above 50 g/day. After adjusting for demographics, lifestyle factors (i.e., smoking, alcohol drinking, physical activity), dietary patterns, and chronic conditions, the odds ratio (OR) (95% CI) for CKD across chili consumption levels of none, 1–20 g/day, 20.1–50 g/day, ≥50.1 g/day were 1.00 (reference), 0.82 (0.67–1.01), 0.83 (0.65–1.05), and 0.51 (0.35–0.75), respectively (p for trend 0.001). There was no interaction between chili intake with gender, income, urbanization, hypertension, obesity, or diabetes. This longitudinal large population-based study suggests that chili consumption is inversely associated with CKD, independent of lifestyle, hypertension, obesity, and overall dietary patterns.
Keywords: chili intake; chronic kidney disease; Chinese; adults chili intake; chronic kidney disease; Chinese; adults

Chronic kidney disease (CKD) is a global health issue contributing to many adverse health outcomes and economic burden [1]. It is a common chronic condition affecting 13.4% of the general population globally and 9.5% in China [1]. In addition to the known risk factors including hypertension, diabetes, obesity, and use of nephrotoxic medication [2], individual nutrients and foods [3,4,5,6] as well as overall dietary patterns and food preference [7,8,9] play an important role in the development and management of CKD.
We have previously reported that a traditional dietary pattern characterized by high intake of rice, pork, and vegetables is positively associated with CKD among participants of the China Health and Nutrition Survey (CHNS) [10]. While total vegetable intake was positively associated with CKD, the association between the specific types of vegetables and CKD has not been examined [10]. There have been mixed findings on the association between vegetable consumption and risk of CKD. Studies showing a positive relationship may be due to contaminants and heavy metals present in those vegetables [10], or due to food preparation. On the other hand, studies have shown a negative relationship, which argues that nutrients from vegetables serve as a protective factor for CKD [11]. We aim to examine chili as a vegetable in relation to CKD.
Chili is one of the most commonly used spices in the world [12], especially in Asia [13]. In China, residents in some regions (e.g., Sichuan, Hunan) have a high consumption of chili [14]. In these regions, chili is not only used as a spice but also as a vegetable. The large variation of chili consumption in China allows for the use of an epidemiological approach to the study of the effects of chili consumption on health outcomes. Recently, an increasing number of studies have identified both beneficial and adverse effects. It has been found that chili consumption is inversely related to mortality [14], obesity [15], and hypertension [16], but positively associated with poor cognition [17]. The binding of capsaicin, the active component of chili, to its receptor leads to inhibition of vascular oxidative stress [18], reduced energy intake, increased energy expenditure, and enhanced fat oxidation [19,20,21,22,23]. These effects of capsaicin have been hypothesized to be responsible for beneficial effects of chili on body weight and blood pressure.
In animal models, it has been shown that capsaicin has beneficial effects on kidney function through acting as a diuretic in healthy and diabetic rats [24] and reducing urinary epidermal growth factor (EGF) levels, a biomarker for kidney disease [24]. Activation of the capsaicin receptor TRPV1 can prevent salt-induced kidney damage in rats [25] and increase glomerular filtration rate (GFR) and renal excretion by increasing natriuresis and diuresis [26,27], indications of kidney function. Thus, current evidence from animal studies suggests a potential role of capsaicin in maintaining kidney function. However, this assertion has not been investigated in humans, and no population studies have assessed the association between chili consumption and CKD. Chili intake has been shown to be inversely associated with the risk of obesity [15] and hypertension [16] in the Chinese population. Compared with non-consumers, those with chili intake above 50 g/day had 27% and 35% reduced risk of developing obesity and hypertension, respectively. This study aimed to assess the association between chili intake and CKD among Chinese adults who participated in the Chinese Health and Nutrition Survey (CHNS).
Furthermore, chronic illnesses such as obesity, hypertension, and diabetes are risk factors for kidney disease. It is possible that the beneficial effects of chili on these conditions contribute to the reduction of kidney disease, rather than the direct effect of chili consumption on kidney function. Therefore, our second aim is to assess whether chili is independently associated with CKD by controlling for a variety of confounding factors as well as testing for any interaction effects.

The CHNS study is an ongoing, open prospective, cohort study that used a multistage random-cluster sampling method to select participants from nine provinces in China from 1989 to 2015. There have been ten waves of data collection (1989, 1991, 1993, 1997, 2000, 2004, 2006, 2009, 2011, and 2015) thus far. Dietary intake was assessed by inviting all members in the selected household to complete each survey between 1991 and 2009. Blood samples were collected at the study sites in the 2009 and 2015 surveys and shipped to Beijing for measurements including serum creatinine. However, the blood measurements in the 2015 survey are not available currently. In the 2009 survey, a total of 9551 out of the 18,887 (50.6%) participants had blood measurements to assess renal function (Figure 1). In the currently analysis, we excluded those below 18 years of age, those who did not provide dietary information in 2009, those who were pregnant, and those who had an extreme intake of energy (i.e., men: >6000 or <800 kcal; women: >4000 or <600 kcal). A total of 8429 participants met the inclusion criteria and were included in the final analytical sample. Informed consent was obtained from all participants, and ethical approval was granted by the institutional review committees of the University of North Carolina and the National Institute of Nutrition and Food Safety.

Chili intake, including both fresh and dried chili peppers (Figure S1), was derived from dietary surveys between 1991 and 2009. In the analysis, chili intake did not include sweet capsicum or black pepper. It was calculated from a cumulative average for each individual at each survey from all the proceeding chili intakes in order to reduce variation within individuals. The use of cumulative average intake from different surveys represented long term habitual intake [30]. The chili intake for mixed dishes was estimated based on the fresh ingredients. In the analysis, the cumulative mean chili intake was recoded into four groups: non-consumers, 1–20 g/day, 20.1–50 g/day, and ≥50.1 g/day. The use of the cut-off was based on our previous paper as well as the serving size [16]. The serving size in the context of Chinese food is a Liang (1 Liang = 50 g). The median portion size of chili intake was 50 g. Furthermore, among the chili consumers, about 30% had chili intake above 50 g per day [16].
The details of the dietary survey has been published elsewhere [31]. All foods and condiments in the home inventory, purchased from shops/markets or picked from home gardens, and food waste, were weighed and recorded by interviewers during the three-day food consumption survey. Individual dietary intake data were collected by a trained investigator on each of three consecutive days. Food consumption data were analyzed and converted into nutrient intake using the Chinese Food Composition Table. The dietary assessment method has been validated for energy intake [32].

A structured questionnaire was used in 2009 during home interviews to collect information on sociodemographic and lifestyle factors. Physical activity level (metabolic equivalent of task, (MET)) was estimated based on self-reported leisure time, occupational, domestic, and commuting activities, and duration using a Compendium of Physical Activities. Smoking status was based on self-report and categorized as non-smokers, ex-smokers, and current smokers. Residence was assessed by a twelve-component urbanization index and recoded into tertiles, which aims to capture population density and physical, social, cultural, and economic environments [31]. Education was categorized as low (illiterate/primary school), medium (junior middle school), and high (high middle school or higher). Per capita annual family income was recoded into tertiles (low, medium, and high). Blood samples collected in 2009 were tested for fasting plasma glucose (FPG) and glycated hemoglobin (HbA1c) [33]. Diabetes was defined as FPG ≥7.0 mmol/L, HbA1C ≥6.5 or having known diabetes (self-reported doctor diagnosed) [34]. C-reactive protein (CRP) in 2009 was measured in blood via the immunoturbidimetric method with Denka Seiken, Japan reagents. We define hypertension as systolic blood pressure above 140 mmHg and/or diastolic blood pressure above 90 mmHg, or having known hypertension [35]. Overweight was defined as BMI ≥25 kg/m2 according to the World Health Organization cut-off.
Two dietary patterns (traditional south pattern and modern pattern) were constructed using factor analysis based on our previous publication [10]. The traditional south pattern is characterized by a high intake of rice, pork, and vegetables, and a low intake of wheat; a modern dietary pattern has a high intake of fruits, soy milk, eggs, milk, and deep fried products.

Sample characteristics were presented as mean (SD) or percentage. Multivariable logistic regression was used to assess the association between cumulative chili intake between 1991 and 2009 with CKD in 2009. Three multivariable logistic regression models were used: Model 1 adjusted for age in 2009, gender, and energy intake; Model 2 further adjusted for education (low, medium, high), income (tertiles), urbanization level (tertiles), physical activity, smoking (non-smoker, ex-smoker, current smoker), alcohol drinking, and dietary patterns (mean score between 1991 and 2009); Model 3 further adjusted for overweight/obesity (yes or no), hypertension (yes or no), and diabetes (yes or no). The variables adjusted in the logistic models were either known risk factors of CKD or sociodemographic factors (i.e., income, education, urbanization levels). Based on our previous study, dietary patterns were associated with CKD in the Chinese population. As chili intake was strongly associated with dietary patterns, we adjusted for mean dietary pattern scores between 1991 and 2009 as confounding factors. In a sensitivity analysis, we included those subjects who attended all seven waves of dietary measurements (N = 2088). The association between chili intake and eGFR was assessed in a multivariable linear regression model with the adjustment for the same covariates as Model 3 described above among those who attended all seven waves (between 1991 and 2009) of dietary measurements. Marginal means were calculated with the margins command and visually presented using the marginsplot command in STATA. We tested the multiplicative interaction between sociodemographic factors (i.e., gender, income, urbanization level), hypertension, overweight, diabetes, and chili intake by adding a cross-product term in the main multivariable model (Model 3). To test the non-linear association between chili intake and CKD, we put a linear and a quadratic term of chili intake in a multivariable logistic regression model. All the analyses were performed by using STATA 16 (Stata Corporation, College Station, TX, USA). Statistical significance was considered when p < 0.05 (two sided).

3.2. Association Between Chili Intake and CKD

This research used data from China Health and Nutrition Survey (CHNS). We thank the National Institute for Nutrition and Health, China Center for Disease Control and Prevention, Carolina Population Center (P2C HD050924, T32 HD007168), the University of North Carolina at Chapel Hill, the NIH (R01-HD30880, DK056350, R24 HD050924, and R01-HD38700), and the NIH Fogarty International Center (D43 TW009077, D43 TW007709) for financial support for the CHNS data collection and analysis files from 1989 to 2015 and future surveys, and the China-Japan Friendship Hospital, Ministry of Health, for support for CHNS 2009, Chinese National Human Genome Center at Shanghai since 2009, and Beijing Municipal Center for Disease Prevention and Control since 2011. 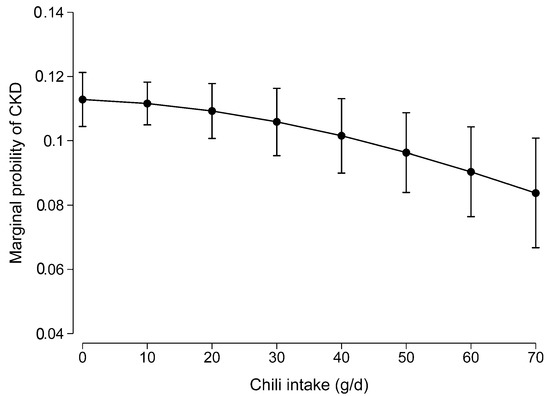 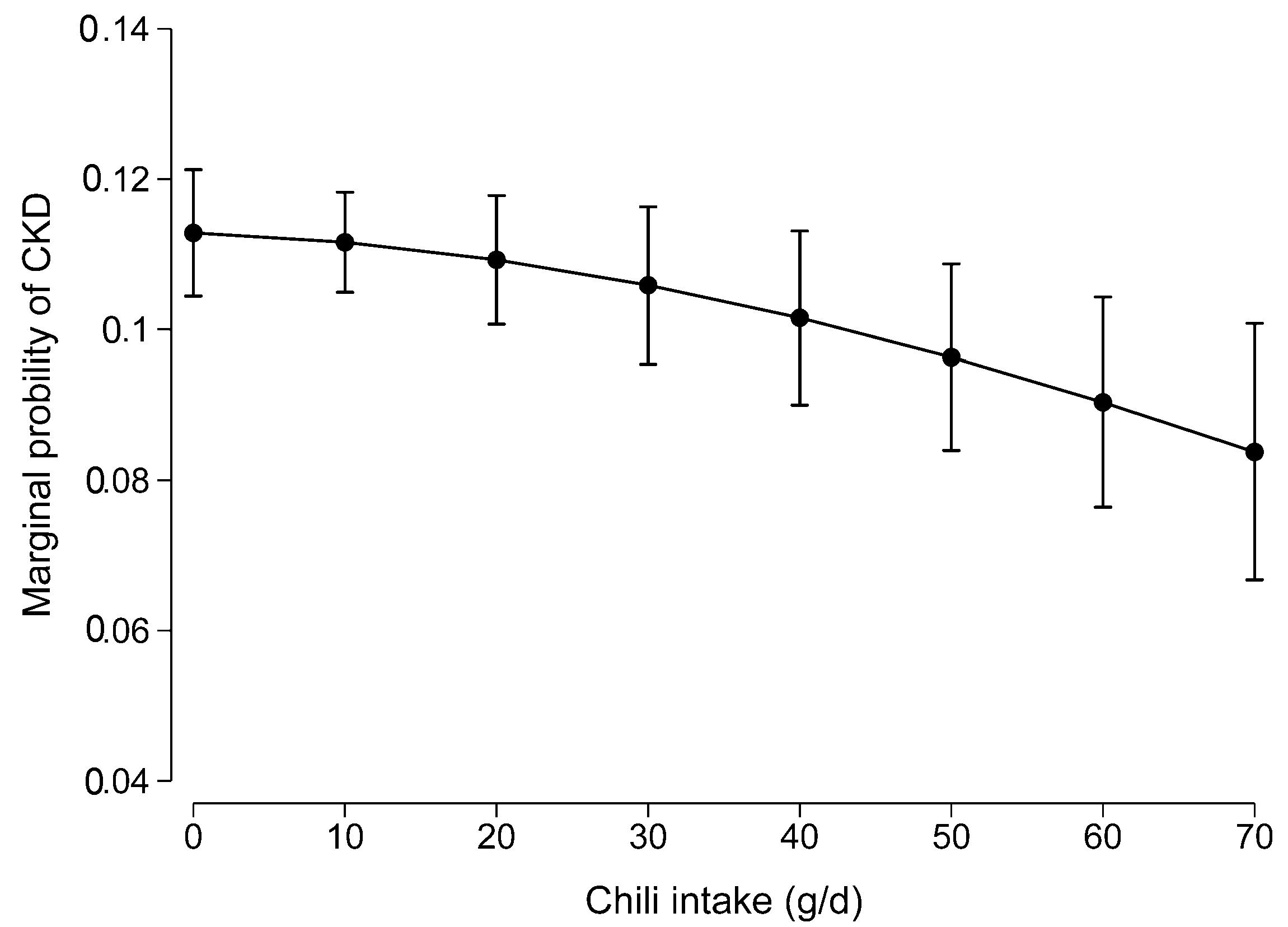 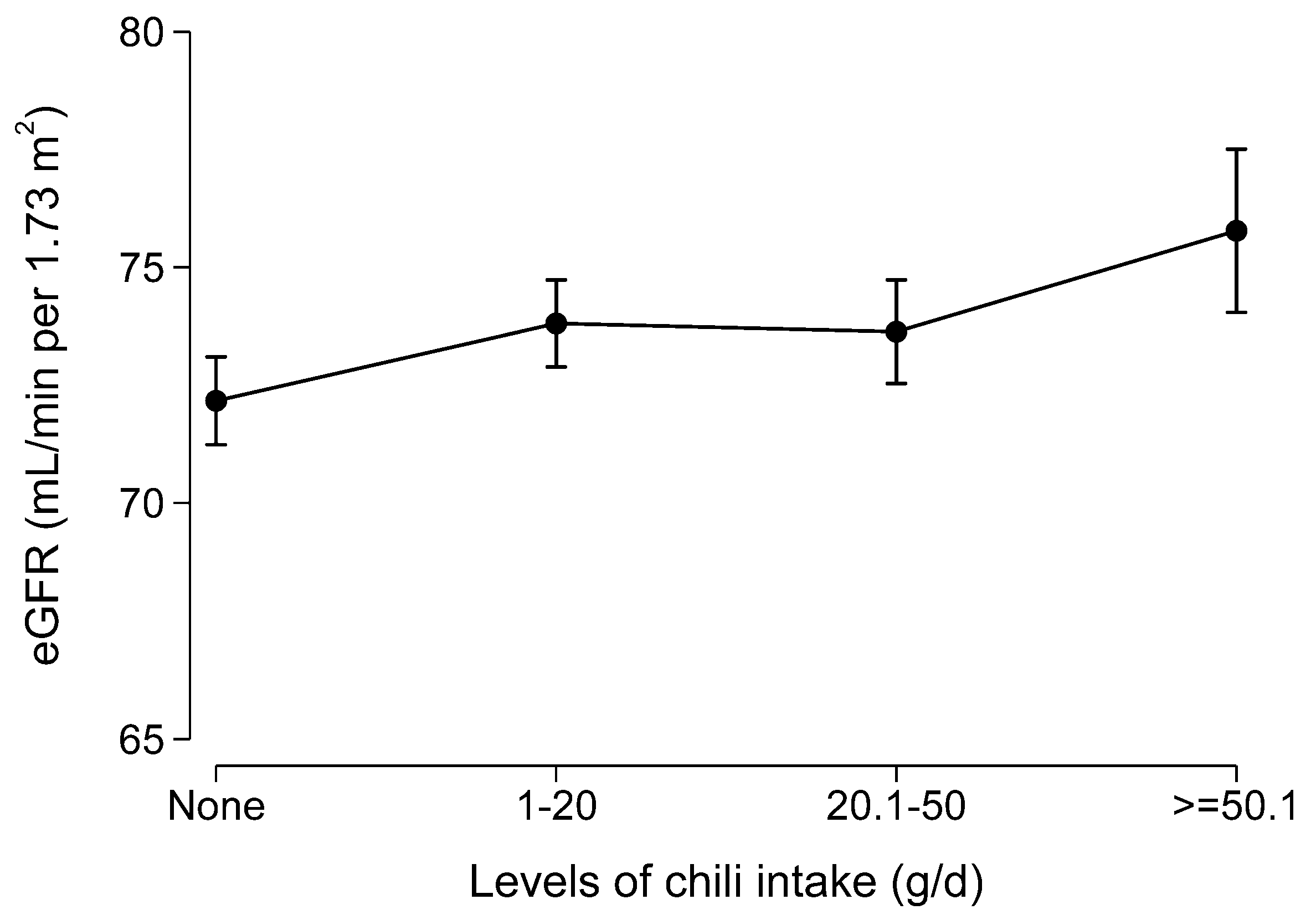