Sodium, Potassium and Iodine Intake, in a National Adult Population Sample of the Republic of Moldova

In the Republic of Moldova, more than half of all deaths due to noncommunicable diseases (NCDs) are caused by cardiovascular disease (CVD). Excess salt (sodium) and inadequate potassium intakes are associated with high CVD. Moreover, salt iodisation is the preferred policy to prevent iodine deficiency and associated disorders. However, there is no survey that has directly measured sodium, potassium and iodine consumption in adults in the Republic of Moldova. A national random sample of adults attended a screening including demographic, anthropometric and physical measurements. Sodium, potassium and iodine intakes were assessed by 24 h urinary sodium (UNa), potassium (UK) and iodine (UI) excretions. Knowledge, attidues and behaviours were collected by questionnaire. Eight-hundred and fifty-eight participants (326 men and 532 women, 18–69 years) were included in the analysis (response rate 66%). Mean age was 48.5 years (SD 13.8). Mean UNa was 172.7 (79.3) mmoL/day, equivalent to 10.8 g of salt/day and potassium excretion 72.7 (31.5) mmoL/day, equivalent to 3.26 g/day. Only 11.3% met the World Health Organization (WHO) recommended salt targets of 5 g/day and 39% met potassium targets (>90 mmoL/day). Whilst 81.7% declared limiting their consumption of processed food and over 70% not adding salt at the table, only 8.8% looked at sodium content of food, 31% still added salt when cooking and less than 1% took other measures to control salt consumption. Measures of awareness were significantly more common in urban compared to rural areas. Mean urinary iodine was 225 (SD: 152; median 196) mcg/24 h, with no difference between sexes. According to WHO criteria, 41.0% had adequate iodine intake. Iodine content of salt table was 21.0 (SD: 18.6) mg/kg, lower in rural than urban areas (16.7, SD = 18.6 vs. 28.1, SD = 16.5 mg/kg, p < 0.001). In most cases participants were not using iodised salt as their main source of salt, more so in rural areas. In the Republic of Moldova, salt consumption is unequivocally high, potassium consumption is lower than recommended, both in men and in women, whilst iodine intake is still inadequate in one in three people, although severe iodine deficiency is rare. Salt consumed is often not iodised. View Full-Text
Keywords: Republic of Moldova; salt; sodium; potassium; iodine; population Republic of Moldova; salt; sodium; potassium; iodine; population
►▼ Show Figures 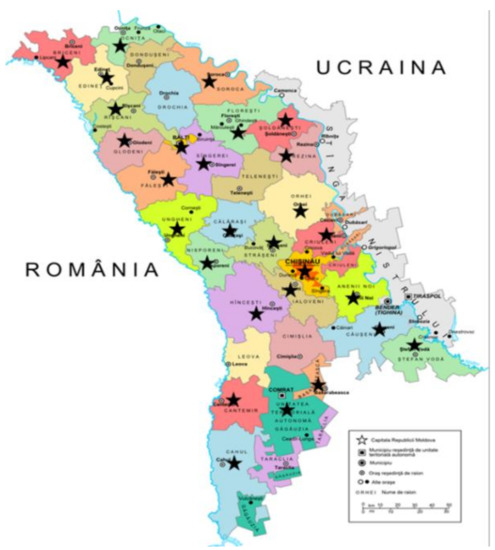