Comparison of the Effects of Fasting Glucose, Hemoglobin A1c, and Triglyceride–Glucose Index on Cardiovascular Events in Type 2 Diabetes Mellitus

Obesity, a recognized risk factor for breast cancer in postmenopausal women, is associated with higher mortality rates regardless of menopausal status, which could in part be explained by therapeutic escape. Indeed, adipose microenvironment has been described to influence the efficiency of chemo- and hormonal therapies. Residual cancer stem cells could also have a key role in this process. To understand the mechanisms involved in the reduced efficacy of hormonal therapy on breast cancer cells in the presence of adipose secretome, human adipose stem cells (hMAD cell line) differentiated into mature adipocytes were co-cultured with mammary breast cancer cells and treated with hormonal therapies (tamoxifen, fulvestrant). Proliferation and apoptosis were measured (fluorescence test, impedancemetry, cytometry) and the gene expression profile was evaluated. Cancer stem cells were isolated from mammospheres made from MCF-7. The impact of chemo- and hormonal therapies and leptin was evaluated in this population. hMAD-differentiated mature adipocytes and their secretions were able to increase mammary cancer cell proliferation and to suppress the antiproliferative effect of tamoxifen, confirming previous data and validating our model. Apoptosis and cell cycle did not seem to be involved in this process. The evaluation of gene expression profiles suggested that STAT3 could be a possible target. On the contrary, leptin did not seem to be involved. The study of isolated cancer stem cells revealed that their proliferation was stimulated in the presence of anticancer therapies (tamoxifen, fulvestrant, doxorubicine) and leptin. Our study confirmed the role of adipocytes and their secretome, but above all, the role of communication between adipose and cancer cells in interfering with the efficiency of hormonal therapy. Among the pathophysiological mechanisms involved, leptin does not seem to interfere with the estrogenic pathway but seems to promote the proliferation of cancer stem cells. View Full-Text
Keywords: breast cancer; adipose secretome; leptin; hormonal therapy resistance; cancer stem cells breast cancer; adipose secretome; leptin; hormonal therapy resistance; cancer stem cells
►▼ Show Figures 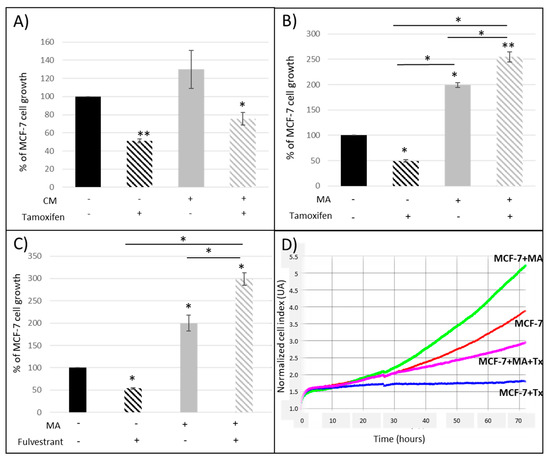