:
Low carbohydrate diets (LC diets) have been noted for adverse health effects. In addition, the effect of lipid composition on an LC diet is unclear. In this study, we used an LC diet containing two different lipids, lard (LC group) and medium-chain triglyceride oil (MCT-LC group), to examine the effect of an LC diet in non-obese mice. Male C57BL/6J mice were fed the control diet or one of the experimental diets ad libitum for 13 weeks. Increased renal weight and glomerular hypertrophy, as well as enlargement of intraglomerular small vessels with wall thickening, were seen in the LC and MCT-LC groups. Renal AMP-activated protein kinase activity was significantly decreased only in the LC diet group. On the other hand, epididymal adipose tissue weight and adipocyte area were markedly decreased only in the MCT-LC group. A positive effect was also observed in the kidney, where different advanced glycation end products, Nε-(carboxyethyl)-lysine and Nε-(carboxymethyl)-lysine, were inhibited depending on the lipid composition of the LC diet. Our findings suggest that, in non-obese conditions, low dietary intake of carbohydrates had both positive and negative impacts. The safety of diets low in carbohydrates, including the effects of fatty acid composition, requires further investigation.
Keywords:
low-carbohydrate diet; non-obese mice; medium-chain triglyceride; kidney; advanced glycation end products

The effects and safety of a low-carbohydrate (LC) diet have been extensively studied [1,2,3,4,5]. Most previous studies have specifically focused on obese and diabetic conditions, demonstrating the effects of an LC diet on weight loss and blood glucose and lipid level regulation [6,7,8,9]. Conversely, other studies have investigated the negative health effects of an LC diet, such as increased oxidative stress, arteriosclerosis, and impaired insulin and glycemic responses [10,11,12,13]. LC diets may affect the development of various diseases, although the association of an LC diet with these various outcomes under obese conditions remains controversial. In obese conditions, adipocyte hypertrophy causes changes in adipocytokines [14], which in turn results in abnormalities in glucose and lipid metabolism [15]; however, abnormal metabolic states are less common in non-obese conditions, so it is doubtful that an LC diet in non-obese conditions will produce the same changes observed in studies targeting obese conditions. Although studies on the effects of an LC diet in non-obese states are limited, the morbidity of diabetes and heart disease, and mortality have been reported to increase with LC diet intake in several cohort studies [12,13,16]. A more detailed reported that an LC diet increased oxidative stress in non-obese mice by reducing hepatic superoxide dismutase activity, and also reduced lipid energy metabolism, but had no significant weight loss effect or effect on the regulation of blood glucose level [10,17].
The effects of different lipid compositions of an LC diet remain unclear, albeit that an LC diet is accompanied by an increase in lipid intake [1]. In a previous cohort study, a high level of meat lipid intake was reported to contribute to the development of heart disease in subjects on an LC diet [12,13,14]. In the present study, we examined the effect of an LC diet in non-obese mice using an LC diet that can be implemented in the long term, which contained 20% carbohydrates and added two types of lipid, lard, or medium-chain triglyceride (MCT) oil. Lard is a common meat lipid that is rich in long-chain saturated and monounsaturated fatty acids. These are major components of the western pattern diet and known to lead to obesity that compromises cardiovascular health [14,18]. MCT is a lipid composed of 8 to 10 carbon atoms, abundant in coconut oil and palm oil. MCT is absorbed directly from blood vessels and rapidly undergoes β-oxidation, thereby supporting the biosynthesis of ketone bodies. MCT oil, which induces a ketogenic condition, has been used to treat Alzheimer’s disease and epilepsy [19,20] and has also been reported to have antitumor effects [21]. In recent years, attention has also focused on diets rich in MCTs for reducing body fat in healthy people and for improving energy efficiency during sports [22,23,24]. However, ketogenic conditions have also been shown to have negative effects. It has been reported that acetoacetic acid, a kind of ketone body, promotes the production of reactive oxygen species [25] and involves protein glycation to produce N(epsilon)-(carboxyethyl)lysine (CEL), one of the advanced glycation end products (AGEs). Therefore, differences in lipid composition may have different effects in an LC diet. In addition, high fat and/or high protein intake from LC diets often cause chronic damage and inflammation of the glomeruli and tubule cells of the kidney, which is due to decreased kidney lipid metabolism and autophagy impairment. Proteinuria via impaired such renal function leads to the accumulation of AGEs [26,27,28,29,30,31].
In this study, we analyzed the effects of intake of an LC diet rich in lard or MCT oil on renal AGE production, morphology, and lipid metabolism of the kidneys in non-obese mice.

Fifteen six-week-old male C57BL/6J mice were obtained from Charles River Laboratory, Inc. (Kanagawa, Japan) and randomly housed with five animals per cage in a temperature-controlled room at 24 °C with a 12 h light-dark cycle (lights off at 21:00). They were fed a control diet (64% carbohydrate, 16% fat, and 20% protein diet, based on AIN-93G, D10012G; Research Diets, Inc., New Brunswick, NJ, USA) during a one-week acclimation period, then divided into the three experimental diet groups of five mice each, namely an LC diet group, MCT-LC diet group, and control diet group. The groups were fed for 13 weeks. The composition of the experimental diet groups is shown in Table S1. The carbohydrate content of the LC diet was 20% and was modified using casein as a protein source and high containing lard or MCT oil as a fat source. Mineral content was adjusted to the same level in all experimental diet groups. The mice were allowed free access to food and drinking water throughout the acclimation and experimental periods. Individual mouse weights and food consumption rates per cage were recorded twice weekly. This study was approved by the Daito Bunka University Animal Experiment Committee at Daito Bunka University in Saitama, Japan and complied with the guidelines of the Japanese Council on Animal Research.

At the end of the 13-week feeding period, the mice fasted for 4 h then were anesthetized by isoflurane inhalation. Blood was sampled through the orbital cavity and separated into the serum by centrifugation. They were then sacrificed by cervical dislocation under anesthesia, and the livers, kidneys, and epididymal adipose tissues (EATs) were immediately removed and weighed. The livers and kidneys were homogenized with TBS containing 1% Triton X-100, a protease inhibitor cocktail (Roche Applied Science, Mannheim, Germany), and phosphatase inhibitors (Roche Applied Science, Mannheim, Germany). The samples were then centrifuged at 5000 rpm for 15 min, the supernatants were removed, and protein concentrations were measured using the BCA protein assay (Thermo Fisher Scientific, Waltham, MA, USA).

For morphological analysis, kidneys, livers, and EATs were fixed with paraformaldehyde, embedded in paraffin, sectioned at a thickness of 3 μm, and stained with hematoxylin-eosin (HE) and Periodic acid-Schiff (PAS). Sections were then examined microscopically. Morphological evaluations were conducted in a blinded manner using image analysis software Image J (NIH, Bethesda, MD, USA). Adipocytes were measured in 50 cell areas and glomeruli were measured for 20 areas per mouse randomly. The average value of each group was then statistically calculated. The kidney was also stained with a biotinylated anti-CML antibody. Briefly, kidney sections were incubated with 0.3% hydrogen peroxide in methanol and treated with the blocking solutions supplied in a tyramide signal amplification kit (TSA Biotin System; PerkinElmer Life Sciences), then incubated with biotinylated anti-CML antibody (overnight at 4 °C) and DAB-labeled streptavidin (30 min at room temperature).

3.1. Body Weight and Weights of Liver and Kidney

Across 13 weeks with the experimental diet, body weight increased in all groups (from 23.0–27.9 g, 23.0–26.8 g, and 23.4–26.1 g in the LC, MCT-LC, and control groups, respectively), with no difference between groups at any time point (Figure 1). Experimental dietary intake also showed no difference between groups during the experiment. Weights of the liver and kidney were measured in the three diet groups and analyzed per gram of body weight (Figure 1). Kidney weight was greater in the LC and LC-MCT diet groups compared to the control diet group (12.2 and 12.0 vs. 10.5 mg per gram of body weight; p = 0.036 and p = 0.044, respectively).

3.2. Weights of EATs and Adipocyte Area.

EAT weight (per gram of body weight) was measured as an index of accumulation of visceral fat. Weight of EAT was lower in mice receiving the MCT-LC diet compared with the control diet (20.5 vs. 30.3 mg/g body weight; p < 0.05), whereas there was no difference between the LC and control diets (28.0 vs. 30.3; p = 0.776, Figure 2A). Morphological evaluation of EATs, stained by HE, showed significant inhibition of hypertrophy in the MCT-LC group but not among those assigned the LC diet (Figure 2B,C).

The renal morphological observation was performed on slices stained using HE and PAS. Glomerulus areas of LC and MCT-LC group were significantly larger than those of the control groups (Figure 3C). In addition, enlargement of intraglomerular small vessels, and imported arterioles hypertrophy with vessel wall thickness, a symptom of diabetic nephropathy and aging, was also observed in the LC and MCT-LC groups (Figure 3B, white arrows indicate enlargement of small vessels, black arrows indicate imported arterioles hypertrophy with vessel wall thickness ). Of the 20 glomeruli randomly counted per mouse, there were seven or more in the LC group and three or more in the MCT group that had enlargement of intraglomerular small vessels with wall thickening.

3.4. CEL and CML Levels in Serum and Kidney

Renal phosphorylated AMPK were significantly reduced only in the LC diet group in comparison to the control group (p < 0.05, Figure 7A,C). In AMPK activation of the hepatic sample, we observed a tendency toward reduction in the LC diet group, as well as recovery of phosphorylation in the MCT-LC group (Figure 7B,D). Downregulation of p-AMPK indicated that fatty acid metabolism was suppressed [17].

This study shows that, in non-obese conditions, low dietary intake of carbohydrates had both positive and negative impacts. Further, the positive impact differed by lipid composition: an LC diet with high MCT showed anti-obesity effects, including a reduction of adipose tissue and adipose area, and renal CEL reduction, whereas an LC diet high in lard resulted in a large reduction in renal CML production. Regarding negative effects, in contrast, this study shows that low dietary intake of carbohydrate may have harmful sequelae, such as glomerular morphological disorder and a decrease in adiponectin. In our study present study, LC and MCT-LC diets were not completely safe, having both good and bad aspects. We also found that renal AGE production was strongly influenced by the lipid composition of the LC diet, which is an important discovery for disease prevention. The safety of diets low in carbohydrates, including the effects of fatty acid composition, requires further investigation.

This work was supported by Japan Society for the Promotion of Science Grant-in-Aid for Scientific Research (C) 15K00885 (to T.K.). 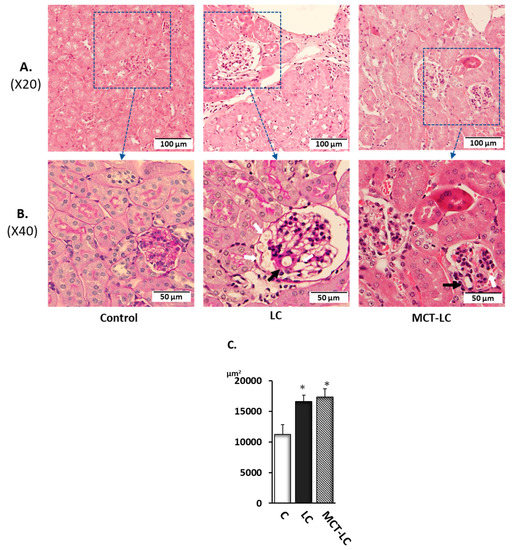 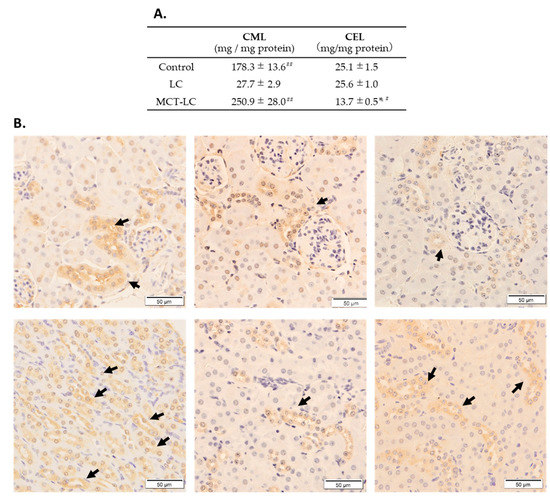 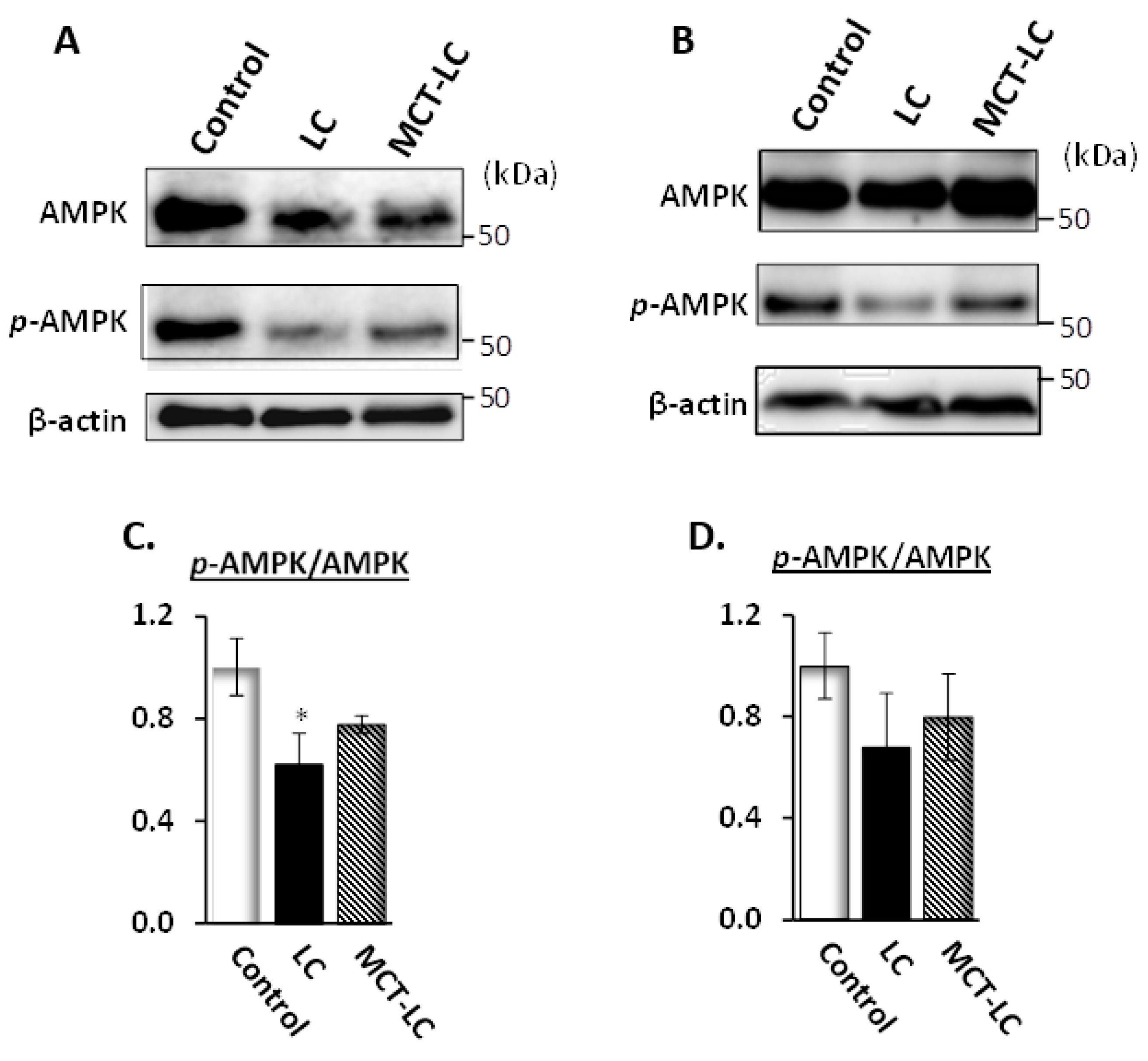 Table 1. Casual serum and fasting serum glucose and β-hydroxybutyrate.
Table 1. Casual serum and fasting serum glucose and β-hydroxybutyrate.
Values are mean ± SEM, n = 5. Control, control diet; LC, low-carbohydrate diet high in lard; MCT-LC, low-carbohydrate diet high in medium-chain triglyceride. * p < 0.05 vs. control by the Tukey’s HSD test.
© 2019 by the authors. Licensee MDPI, Basel, Switzerland. This article is an open access article distributed under the terms and conditions of the Creative Commons Attribution (CC BY) license (http://creativecommons.org/licenses/by/4.0/).
We use cookies on our website to ensure you get the best experience. Read more about our cookies here.
Accept
We have just recently launched a new version of our website. Help us to further improve by taking part in this short 5 minute survey here. here.
Never show this again