Ubiquinol (QH), a reduced form of coenzyme Q10, is a lipid antioxidant that is hydro-soluble and is commonly formulated in commercial supplements. Ubiquinol has been increasingly reported to exert antioxidant functions, in addition to its role in the cell energy-producing system of mitochondria and adenosine triphosphate (ATP) production. The aim of this study was to assess the potential beneficial effects of QH on anti-fatigue and ergogenic functions following physiological challenge. Forty 8-week-old male Institute of Cancer Research (ICR) mice were divided into four groups (n = 10 for each group): Group 1 (vehicle control or oil only); Group 2 (1X QH dose or 102.5 mg/kg); Group 3 (2X QH dose or 205 mg/kg); Group 4 (6X QH dose or 615 mg/kg). Anti-fatigue activity and exercise performance were studied using the forelimb grip strength experiment and exhaustive weight-loaded swimming time, and levels of serum lactate, ammonia, glucose, BUN (blood urea nitrogen), creatine kinase (CK), and free fatty acids (FFA) after an acute exercise challenge. The forelimb grip strength and exhaustive weight-loaded swimming time of the QH-6X group were significantly higher than those of the other groups. QH supplementation dose-dependently reduced serum lactate, ammonia, and CK levels and increased the FFA concentration after acute exercise. In addition, QH increased the liver and muscle glycogen content, an important energy source during exercise. Therefore, the results suggest that QH formulation is a safe dietary supplement for amelioration of fatigue and for promoting exercise performance.
Keywords: Q10; exercise performance; anti-fatigue; glycogen storage Q10; exercise performance; anti-fatigue; glycogen storage

Physical fatigue is commonly defined as the reversible decline of performance during activity [1]. The commonly known fatigue mechanisms are related to metabolic fuel availability and the accumulation of waste products. Reactive oxygen species (ROS) are produced by practicing intense and long-term physical exercise, which may induce tissue damage and oxidative stress [2], and antioxidant supplementation attenuates exercise-induced oxidative stress and fatigue of the body [3]. It is reasonable to assume that if one can overcome the effects of fatigue, its impact upon physical performance can be reduced. Coenzyme Q10 (Ubiquinone, CoQ10), a lipid-soluble vitamin-like nutrient found naturally, is synthesized as an endogenously antioxidant in the body [4]. Due to its ubiquitous distribution in nature, CoQ10 is also known as ubiquinone [5]. In mitochondria, CoQ10 is a key component of the mitochondrial respiratory chain for adenosine triphosphate synthesis [6], and it is found in both the reduced and oxidized states [7]. The two main functions of CoQ10 are energy production and antioxidation. CoQ10 participates in aerobic cellular respiration and is a cofactor in the mitochondrial electron transport chain; therefore, it plays an essential role in the production of adenosine triphosphate (ATP) [8]. CoQ10 is mainly biosynthesized and concentrated in tissues and organs with high metabolic turnover or energy demand, such as the heart, kidneys, liver, and muscles [9]. CoQ10 also shares its biological implication with membrane-associated related redox, which serve as other redox carriers, including dehydrogenases, cytochromes, and non-heme-iron proteins [10,11]. Increasing attention has been paid to the application of CoQ10 as an antioxidant for the prevention and treatment of a great variety of functional disorders, such as fatigue.
CoQ10 has two major disadvantages. First, CoQ10 is a relatively large hydrophobic molecule; its absorption is often slow and limited [12]. CoQ 10 mainly occurs in the small intestine, passes into the lymphatic system, and finally to the blood and tissues [13]. Second, ubiquinol is the reduced active antioxidant form of Coenzyme Q10. Although the oxidized form of ubiquinone is normally readily reduced to ubiquinol enzymatically after dietary intake [14], research has shown that this process becomes increasingly difficult with age [15,16].
Some studies have investigated the potential ergogenic value of CoQ10, but the results have been inconsistent. The differences between the results may be due to the distinct study designs, which differed in terms of type, dosage, and time frame of treatment. The reduced and more absorbable form of CoQ10, ubiquinol (QH), and the possible use of CoQ10 as a natural nutritional supplement for exercise performance and to mitigate fatigue have not been examined. In this study, we investigated the effects of QH supplementation on exercise performance and on anti-fatigue activities in a mouse model.

QH was purchased from Sinphar Pharmaceutical Co. Ltd (Yilan, Taiwan). Forty 8-week-old specific pathogen-free (SPF) male Institute of Cancer Research (ICR) mice were used in this study. All the experimental animals were given free access to a commercial standard chow diet (No. 5001, PMI Nutrition International, Brentwood, MO) and distilled water ad libitum. They were maintained under standard laboratory conditions of 12-h light and dark phases at a 22 ± 2 °C ambient temperature with 50%–60% relative humidity. Twice each week, the bedding and bottles were changed and cleaned. All the experiments were conducted under a protocol approved by the Institutional Animal Care and Use Committee (IACUC) ethics committee of the National Taiwan Sport University, and the study conformed to the guidelines of protocol IACUC-10516.
The detailed experimental procedure is illustrated in Figure 1. After a 1-week acclimation period, mice were randomly distributed into the four groups (n = 10 per group) for oral gavage treatment with QH or oral gavage of vehicle only once per day for 28 days. The groups received the following treatments: Group 1 (vehicle control or oil only); Group 2 (1X QH dose or 102.5 mg/kg); Group 3 (2X QH dose or 205 mg/kg); Group 4 (6X QH dose or 615 mg/kg). The concurrent control group received vehicle solution. The quantities of food and water consumed by each group of mice were monitored daily, and the body weights of the mice were measured weekly.

Endurance performance is an important parameter for evaluating anti-fatigue, evaluated by an exhaustive swimming test. On the 29th day of the experiment, 30 min after the oral administration, the mice were placed individually in a columnar swimming pool (65 cm high with a 20 cm radius) containing fresh water maintained at 28 ± 1 °C, approximately 40 cm deep. Each mouse was loaded with a lead block, weighting approximately 5% of the body weight tagged to the tail. The endurance performance of each mouse was measured as the swimming time, recorded from the beginning to exhaustion. The mice were determined to be exhausted when uncoordinated movements occurred with failure to swim to the surface within a 7-second period [18]. The exhaustive swimming time was used as an index of exercise endurance.

The effects of QH on serum lactate levels were evaluated after 4 weeks of administration. The fatigue-related variables were assessed under fasting conditions to reflect the real physiological adaptation during the acute exercise challenge. The blood sample time points were pre-exercise, after 10 min of the swimming exercise, and following 20 min of rest. Serum samples were collected after centrifugation at 1000× g for 15 min at 4 °C and were analyzed by an autoanalyzer (Hitachi 7060, Hitachi, Tokyo, Japan).

On the 33rd day of the experiment, 30 min after the oral administration, mice from each group were subjected to a 90-min free swimming challenge without a weight load. At the end of the swim, the mice rested for 60 min before blood samples were taken for analysis of urea nitrogen (BUN), creatine kinase (CK), ammonia (NH3) and free fatty acids (FFA). Serum samples were collected after centrifugation at 1000× g for 15 min at 4 °C and were analyzed by an autoanalyzer (Hitachi 7060, Hitachi, Tokyo, Japan).

All animals were euthanized with 95% CO2 asphyxiation 48 h after the last treatment, and blood was immediately collected. After the mice were euthanized, the liver, kidneys, heart, lung, skeletal muscle, epididymal fat pad (EFP), and brown adipose tissue (BAT) were accurately excised and weighed. After skin removal, the hind limb muscle was separated from the tibia and fibula bones. The gastrocnemius muscle was isolated from its surrounding muscles. Organs and tissues were carefully excised, rinsed in saline solution and blotted dry. The whole weight and the specific tissue weight (%) relative to the individual body weight were recorded and calculated. The muscle and liver tissues were collected immediately after saline cleaning and stored in liquid nitrogen for glycogen concentration analysis.

Parts of the liver and muscle tissues were stored in liquid nitrogen for glycogen concentration analysis, as described previously [19]. Briefly, 100 mg of liver and muscle tissue was finely cut, weighed, and homogenized in 0.5 cold perchloric acid. After centrifugation for 15 min at 15,000× g and 4 °C, the supernatant was discarded. Standard glycogen (Sigma, USA) or tissue extracts (30 µL) were added to wells of a 96-well plate, followed by an iodine-potassium iodide reagent (200 µL). The plate was allowed to rest for 10 min before the absorbance was measured at 460 nm by an ELISA reader.

Organs were carefully removed, minced, and fixed in 10% formalin. Tissues were embedded in paraffin and cut into 5 μm thick slices for morphological and pathological evaluation. Sections were stained with hematoxylin-eosin (H&E) and examined under a microscope equipped with a charged couple device (CCD) camera (BX-51, Olympus, Tokyo, Japan).

Intracellular liver and muscle glycogen were stained with the periodic acid Schiff (PAS) staining solution (Muto Pure Chemicals, Tokyo, Japan) according to the standard protocol. Briefly, sections were deparaffinized and reacted with 1% periodic acid solution. The samples were then reacted with Schiff’s reagent and washed using NaHSO3/HCl solution. Hematoxylin was used for counterstaining. The samples were examined under a light microscope equipped with a CCD camera (BX-51, Olympus, Tokyo, Japan).

Data are expressed as the mean ± SEM. All the statistical analyses were performed using SAS 9.4 (SAS Inst., Cary, NC, USA) based on one-way analysis of variance (ANOVA). The Cochran–Armitage test was used for the dose-effect trend analysis. The level of statistical significance was set at p < 0.05.

3.2. Effects of QH on Grip Strength

3.3. Effects of QH Supplementation on Endurance Capacity in the Exhaustive Swimming Test

3.4. Effects of QH Supplementation on Lactate after a 10-min Swimming Test

3.5. Effects of QH Supplementation on BUN, CK, Ammonia, and FFA after a 90-min Swimming Test and a 60-min Rest Period

3.8. Effects of QH Supplementation on Histology and PAS stain

As seen in Figure 7, the four groups did not differ in the histological observations of the liver, kidney, heart, lung, muscle, and EFP. The arrangement of sinusoid and hepatic cords in the liver showed no changes with respect to QH treatments (Figure 7A). Hyperplasia and hypertrophy were not observed in rhabdomyocytes of the gastrocnemius muscle (Figure 7B) or heart cardiomyocytes (Figure 7C). All animals showed typical tissue architectures of the lung alveoli by H&E staining (Figure 8D). In addition, adipose tissue morphology and fat cell size did not differ between the groups (Figure 7E). The structures of renal tubules and the glomerulus did not differ between the groups (Figure 7F). The results suggest that QH supplementation at these doses was safe and there were no apparent damage effects on major organs or tissues.
PAS staining can be used to provide a visual and qualitative assessment of the glycogen concentration, wherein more intensely pink-stained fibers and muscles contain more glycogen (Figure 8). Compared with those of the vehicle group, the liver and muscle tissues of the mice in the QH-2X and QH-6X groups demonstrated higher amounts of glycogen. Overall, PAS staining confirmed the increases in the liver and muscle glycogen resulting from QH treatments.

The results from this study suggest that 4 weeks of QH supplementation can significantly improve physical activities, including grip strength and endurance capacity, by reducing metabolites, including lactate, BUN, CK, and ammonia, and by improving the muscle and liver glycogen synthesis and reserves. This effect appears to be related to a switch to lipid utilization as an energy source. Therefore, QH is an emerging molecule in sport nutrition supplementation to elevate exercise performance and tolerance and to reduce physical fatigue in exhaustive exercise and under modern life stress conditions. In conclusion, these results suggest that QH formulation should not lead to any safety concerns and can mitigate fatigue and enhance exercise performance. 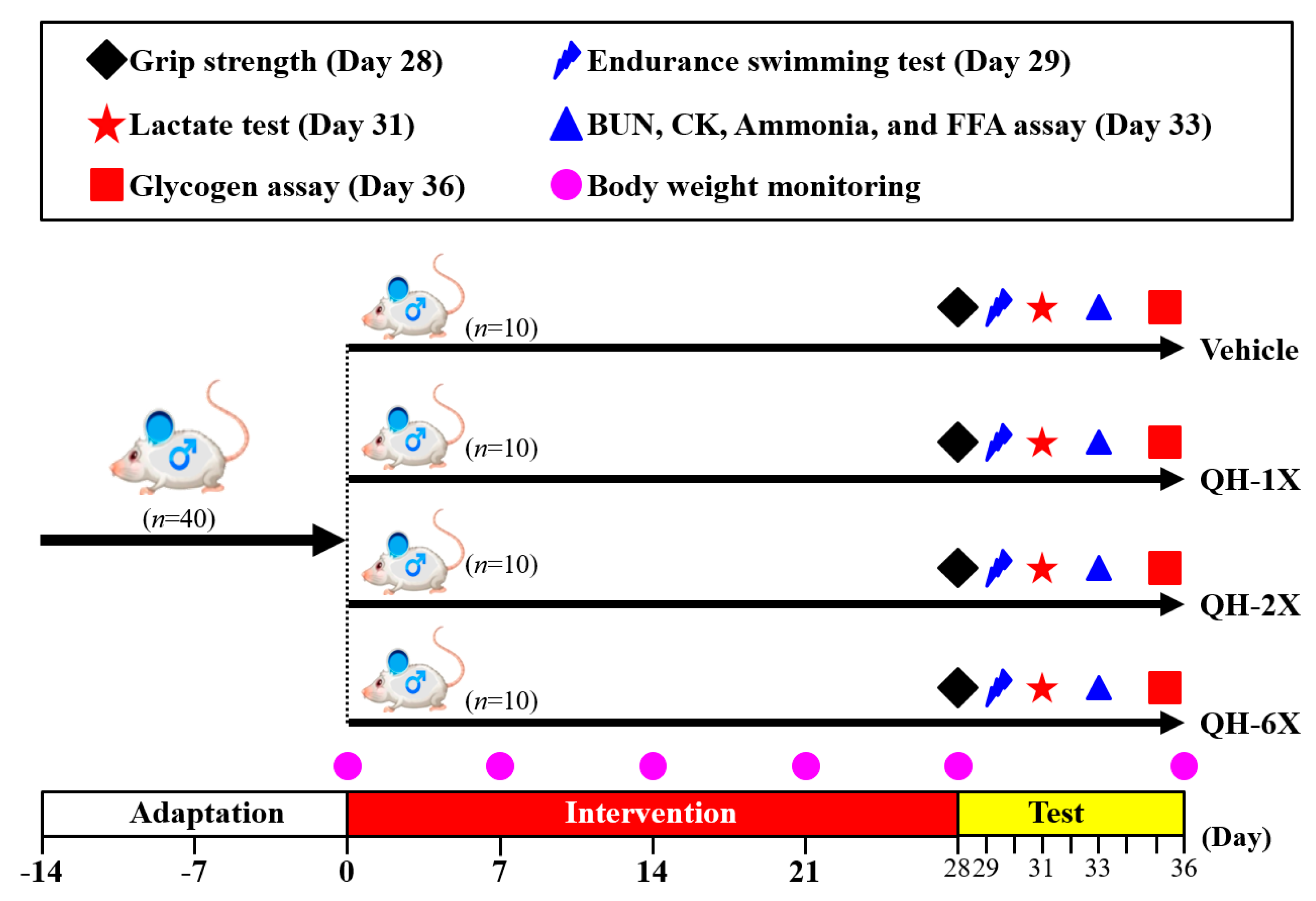 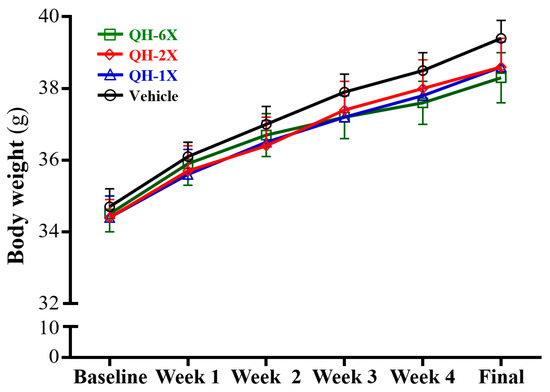 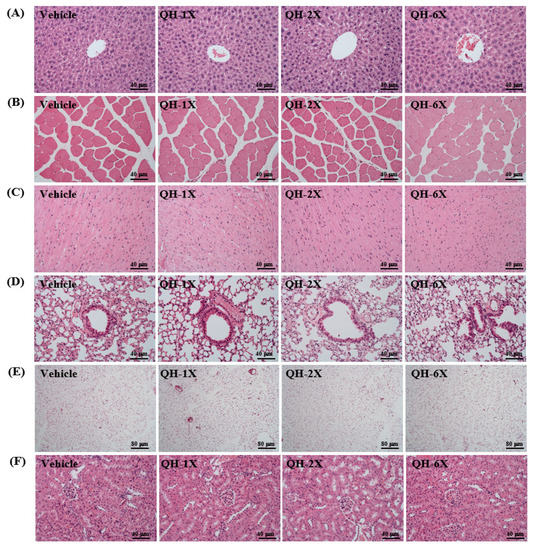