Exploring Views of Healthcare Professionals, Researchers, and People Living with and beyond Colorectal Cancer on a Healthy-Eating and Active Lifestyle Resource
Previous Article in Journal

Nuts are a significant source of macronutrients (e.g., proteins, unsaturated fats, polysaccharides, fiber), micronutrients (e.g., vitamins and minerals), and bioactive compounds (e.g., tocopherols, phytosterols, phenolic compounds [1]). Ellagitannins (ETs) and ellagic acid (EA) are polyphenols present in nuts, pomegranates, and berries [2]. The human gut microbiota can metabolize ETs and EA into the bioactive metabolites urolithins by lactone-ring cleavage, decarboxylation, and dehydroxylation reactions [3]. Epidemiologic studies have associated long-term nut consumption with a reduced incidence of coronary heart disease, hypertension, and cholesterol-lowering effect [4]. The health-related effects of nut consumption may be linked to gut microbiota, which can release bioactive compounds with higher bioavailability and functionality than parental compounds [5]. Several studies have demonstrated changes in gut microbial communities after the intake of ETs-containing foods on week timescale [2,6,7,8,9,10]. Besides, some of these studies revealed a personalized effect of foods containing ETs [6], which supports the concept of personalized nutrition. According to how ETs metabolize via gut microbiota, individuals can be stratified into three urolithin metabotypes (UMs) [11,12]. Metabotype A (UM-A) is characterized by the production of urolithin-A (Uro-A). Metabotype B (UM-B) is characterized by the production of urolithin-B (Uro-B), isourolithin-A (IsoUro-A), and Uro-A. Metabotype 0 (UM-0) does not produce these final urolithins [11]. Recently, three urolithin-producing bacteria belonging to the genus Gordonibacter (G. pamelaeae and G. urolithinfaciens) and Ellagibacter isourolithinifaciens were isolated from human feces [13,14,15,16]. UMs have been proposed as potential cardiovascular disease (CVD) risk biomarkers [17]. Furthermore, UMs were associated with the host blood lipid profile and with the interindividual variability in the improvement of cardiovascular risk biomarkers after the consumption of pomegranate ellagitannins for six weeks [6,17]. In this scenario, this study aims to evaluate the impact of a short-term (three days) nutritional intervention with walnuts on the gut microbiota composition and function in healthy individuals according to their UMs.

A total of 27 healthy individuals (Valencia, Spain) were enrolled in the study. The inclusion criteria were for participants to be older than 18 years old, have a non-declared pathology, and not have taken antibiotics, medication, or pre/probiotics in the two months before the study. The intervention consisted of an intake of 33 g of walnuts per day for three days. A total of 100 g of peeled walnuts provided with 65 g of fats (SFA: 6.4 g; MUFA: 10 g; PUFA: 48 g), 4 g of carbohydrates, 15 g of protein, 12 g of dietary fiber, and 0.02 g of salt. Proanthocyanidins were quantified after acid-catalysis in the presence of phloroglucinol, as previously reported [18]. The analysis of hydrolysable tannins was performed after an acid hydrolysis of nut samples using a method previously reported [19].
Walnut samples contained (mg/g fresh weight; mean ± SD): ellagic acid 4.15 ± 0.60; gallic acid 0.48 ± 0.07; and catechin 0.44 ± 0.04. At the beginning (T0) and the end (T3) of these time-points, participants collected fecal samples for gut microbiota analysis and short fatty acids (SCFA) determination and urine for urolithin determination and subsequent UMs stratification. Moreover, each participant filled out a questionnaire about their clinical, anthropometric, and nutritional records at the end of the interventional study. Additionally, the intake of ellagitannins-containing food, as pomegranate and berries were restricted throughout the intervention study. BMI was calculated and stratified as following: lean–normal weight (≤25.0 kg/m2), overweight (25.0–30.0 kg/m2), and obese (≥30.0 kg/m2) [20]. Written informed consent was obtained from all the volunteers. The local ethics committee of Atención Primaria-Generalitat Valenciana (CEIC-APCV) approved the study protocol. All experiments were carried out following approved guidelines and regulations.

The dietary intake of the participants was determined through a comprehensive 140-item validated food frequency questionnaire (FFQ) [21]. In all cases, we validated the FFQ information registered by participants with a three-day food record questionnaire for the intake of dietary nutrients. FFQ records were transformed to energy, macro, and micronutrients daily intake using the nutrient food composition tables developed by the Centro de Enseñanza Superior de Nutrición Humana y Dietética (CESNID) and analyzed by EASY DIET software. Moreover, a 14-item, PREDIMED (PREvención con DIeta MEDiterránea) validated test was used to appraise adherence of participants to the Mediterranean diet [22].

Each volunteer collected urine and fecal samples at home using plastic containers following standardized protocol given by the team. Then, those were placed in the freezer at −20 °C overnight, before sending to the laboratory where the samples were stored at −80 °C until analysis.

Urolithins were identified in urine samples after the three-day nut intervention using ultra performance liquid chromatography–electro spray ionization–quadrupole time of flight–mass spectrometry (UPLC-ESI-QTOF-MS), as previously described [23]. The individuals’ stratification, according to their UMs (UM-A, UM-B, and UM-0), was carried out as previously described [24].

DNA was extracted from fecal samples using a commercial kit, the Master-Pure DNA Extraction Kit (Epicentre, Madison, WI, USA), following the manufacturer’s instructions with modifications described in García-Mantrana [25]. Purification of the DNA was performed using the DNA Purification Kit (Macherey-Nagel, Duren, Germany) according to the manufacturer’s instructions.
Specific primers (F_Gordon and R_Gordon) and a TaqMan probe (P_Gordon) targeting the 16S rRNA gene of Gordonibacter genus were used for quantification via the real-time quantitative polymerase chain reactions (qPCR) [26], because Gordonibacter genus appears in a very low relative abundance, and is not possible to detect by next-generation sequencing (NGS) methods. A touch-down qPCR protocol was applied for DNA amplification and the ramping profile was: 1 cycle at 95 °C for 5 min, followed by the first 20 cycles of 94 °C for 30 s, an auto-increment of 0.5 °C from 55 to 65 °C for 45 s, 72 °C for 2 min. Then, the second 20 cycles of 94 °C for 30 s, 55 °C for 45 s, and 72 °C for 2 min were applied. Finally, it was added 1 cycle at 72 °C for 5 min.
Gut microbiota composition and diversity were determined by V3-V4 variable region of the 16S rRNA gene sequencing, following Illumina protocols. After 16S rDNA gene amplification, Nextera XT Index Kit (Illumina, San Diego, CA, USA) was used for the multiplexing step and a Bioanalyzer DNA 1000 chip (Agilent Technologies, Palo Alto, CA, USA) for checking the PCR product quality. Libraries were sequenced using a 2 × 300 pb paired-end run (MiSeq Reagent kit v3) on a MiSeq-Illumina platform (FISABIO sequencing service, Valencia, Spain), according to the manufacturer’s instructions (Illumina). Statistical analyses of the 16S rRNA gene sequence data were performed with QIIME statistical tools [27]. Chimeric sequences and sequences that could not be aligned were removed from the data set. Sequences that were classified as Cyanobacteria and Chloroplasts were also removed.

The analysis of urolithins in urine after three days of walnut consumption was used for clustering the individuals according to their UMs: UM-A (n = 14), UM-B (n = 13), and UM-0 (n = 0). No significant differences were found in the demographic, clinical, and nutritional characteristics, as well as the Mediterranean diet score according to UMs (Table 1).

Baseline microbiota (T0, n = 27) was characterized by the presence of Firmicutes with a mean relative abundance and SD of 77.31% ± 2.88, followed by Bacteroidetes (15.86% ± 0.28), Actinobacteria (3.13% ± 0.65), Verrucomicrobia (1.78% ± 1.22), and Proteobacteria (1.31% ± 1.50) at the phylum level. The relative abundance of phylum Synergistetes was significantly enriched in UM-B (p < 0.05) compared to UM-A. At the family level, the family Lachnospiraceae was associated with UM-A, whereas the abundance of the families Cerasicoccaceae, Peptostreptococcaceae, Synergistaceae, and Paraprevottelaceae were related to UM-B. A redundancy analysis (RDA) on genus level showed significant differences in the microbial population, according to UMs (p = 0.025) (Figure 1A). Volunteers belonging to UM-B had a higher richness (p = 0.003, Chao 1 index) than UM-A (Figure 1B).
Lefse analysis showed that Dorea, Holdemania genus, and members of Lachnospiraceae family were enriched in UM-A, while genus cc_115, Oxalobacter, members of Synergistaceae, Cerasicoccaceae, Coriobacteriacea, Peptostreptococcaceae family, and Paraprevotella were associated with UM-B individuals (Figure 1C).

3.3. Microbiota Composition of UM-B is Sensitive to Walnuts Consumption

The redundancy analysis (RDA) of all individuals (n = 27) showed that bacterial communities were significantly affected by the three day walnut intervention (p = 0.001). However, when the volunteers were stratified according to their UMs, these shifts were only significant for UM-B (p = 0.017) (Figure 2D). At the phylum level, walnut intake decreased the relative abundance of Bacteroidetes and increased Actinobacteria when all individuals were considered (p < 0.05). These differences were consistent for UM-B after clustering. At the family level, walnut consumption increased the Coriobacteriaceae family in both UMs, while the Bifidobacteriaceae family increased after three days only for UM-B volunteers. Among bacterial genera, members of the Lachnospiraceae family decreased after the walnut intervention in UM-A individuals, Coprococcus and Collinsella increased in both UMs, whereas Blautia, Bifidobacterium, and unclassified Coriobacteriaceae increased only in participants belonging to UM-B (p < 0.05) (Figure 2B,E). According to the Chao1 index, gut microbial richness significantly decreased for UM-A (p = 0.024) and UM-B (p < 0.001) after walnut consumption (Figure 2C,F).

Before the intervention, volunteers belonging to UM-A tended to present higher levels of butyrate (p = 0.070). After the intervention, we did not find significant differences in SCFA production after walnut consumption according to UMs (data not shown), but analyzing all participants as a single group, the walnut intake increased the total SCFA (p = 0.012) levels, specifically acetate (p= 0.021) and propionate (p = 0.040) (Figure 4).

This research was funded by the European Research Council under the European Union’s Horizon 2020 Research and Innovation Program (ERC starting grant, n° 639226), the RTI2018-097982-B-I00 from the Spanish Ministry of Science, Innovation and Universities (MICINN) and AGL2015-64124-R (MINECO, Spain) and by the Research Foundation Flanders (postdoctoral fellowship FWO-12R2717N and travel grant FWO-V436918N).

Authors would acknowledge the support from the European Research Council under the European Union’s Horizon 2020 Research and Innovation Program (ERC starting grant, n° 639226) and RTI2018-097982-B-I00 from the Spanish Ministry of Science, Innovation and Universities (MICINN) and AGL2015-64124-R (MINECO, Spain). M.C. is supported by the Research Foundation Flanders (postdoctoral fellowship FWO-12R2717N and travel grant FWO-V436918N). The authors also thank the participants involved in the study. 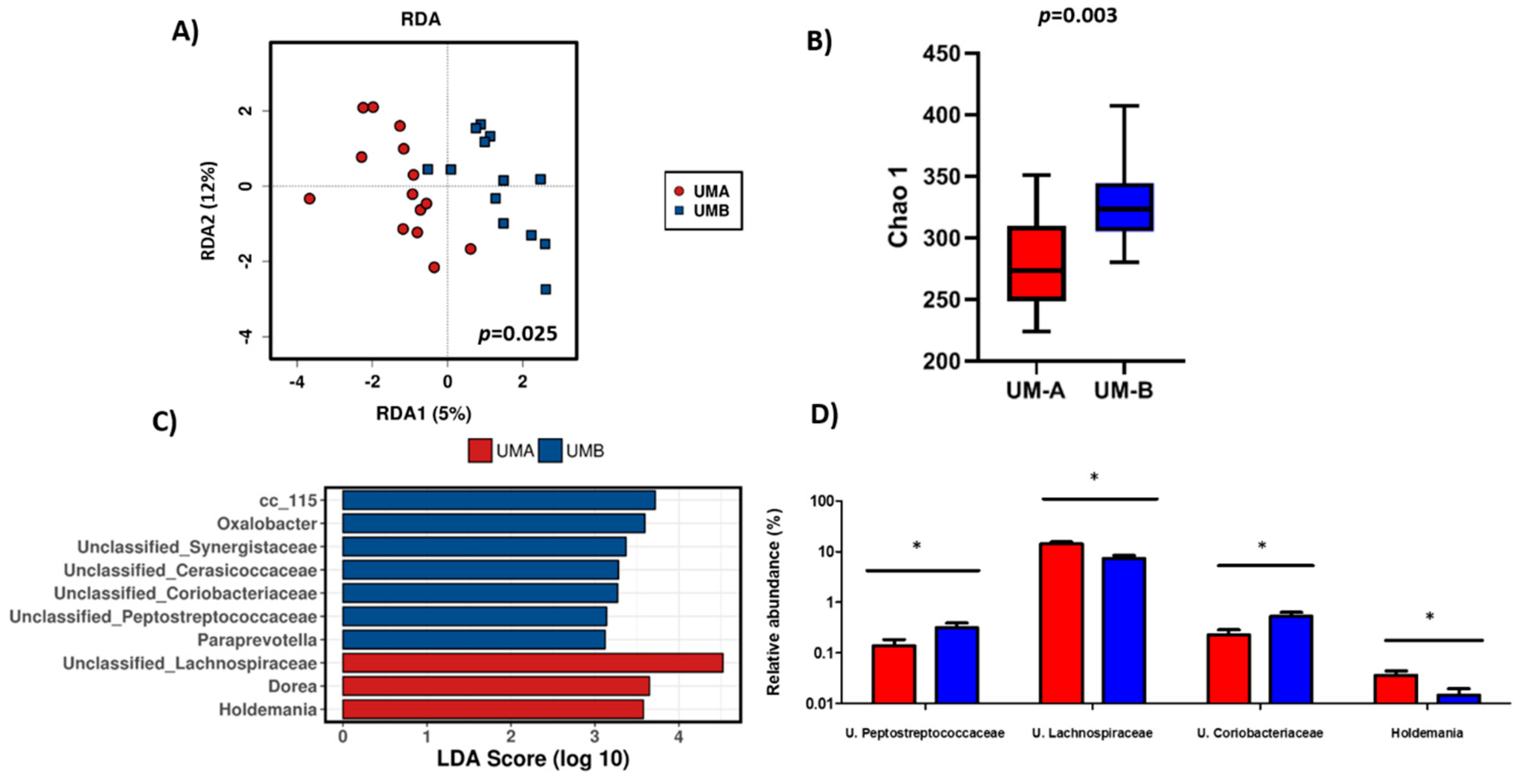 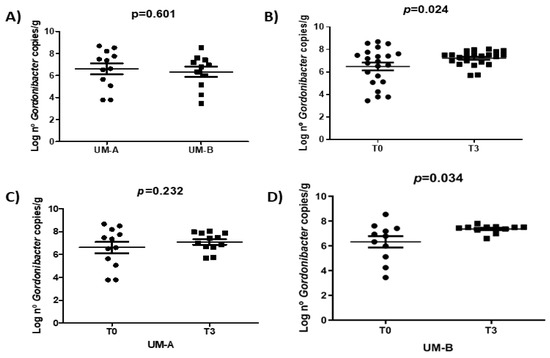 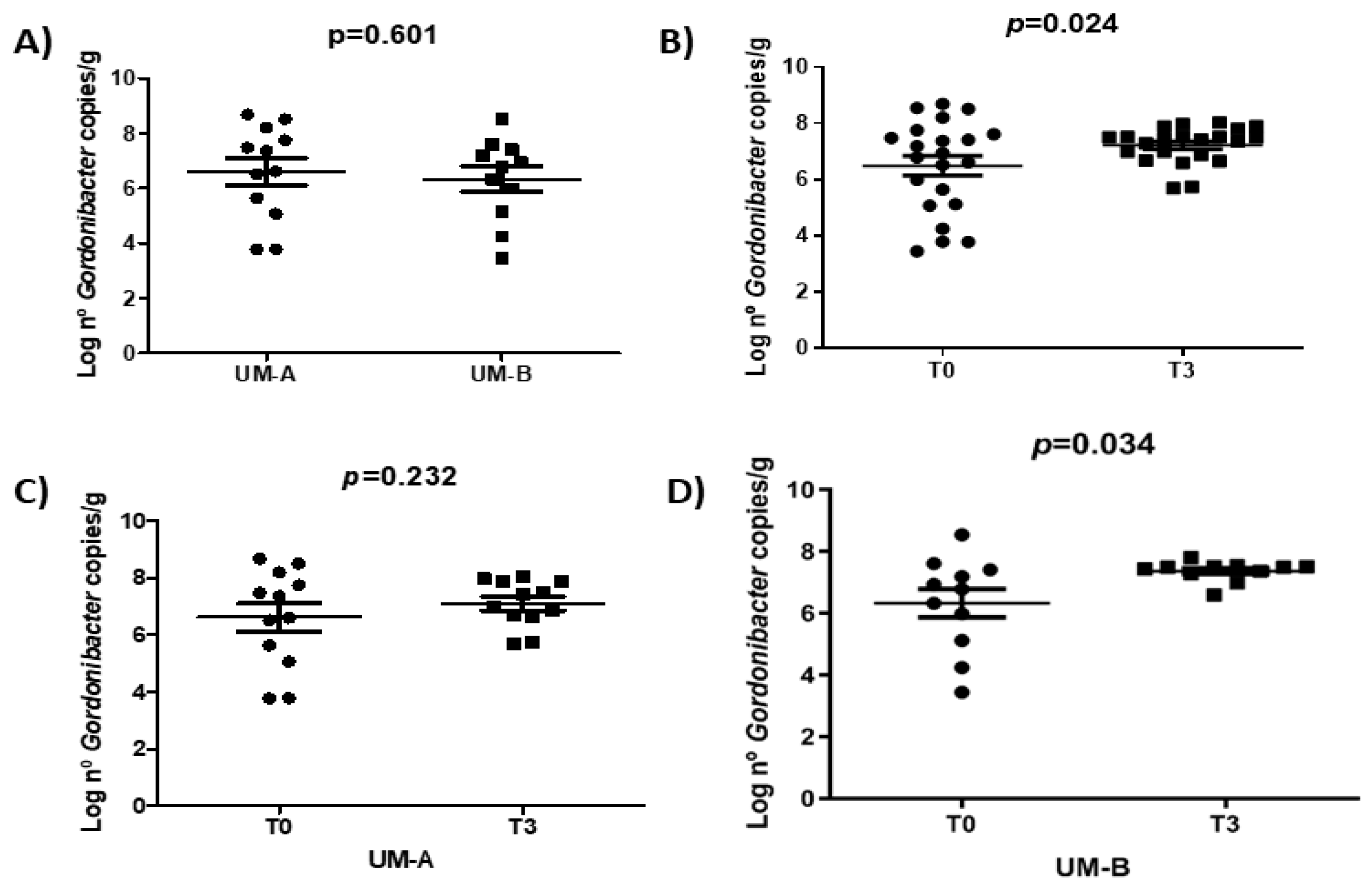 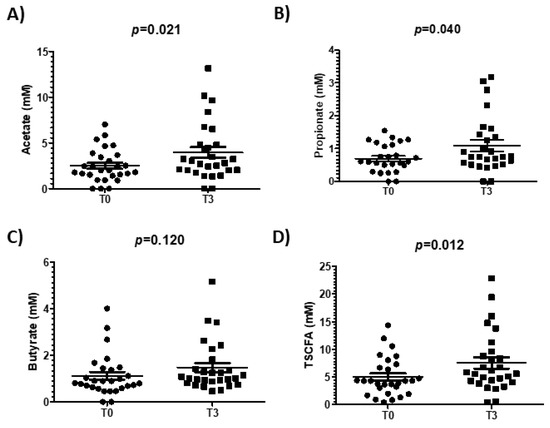 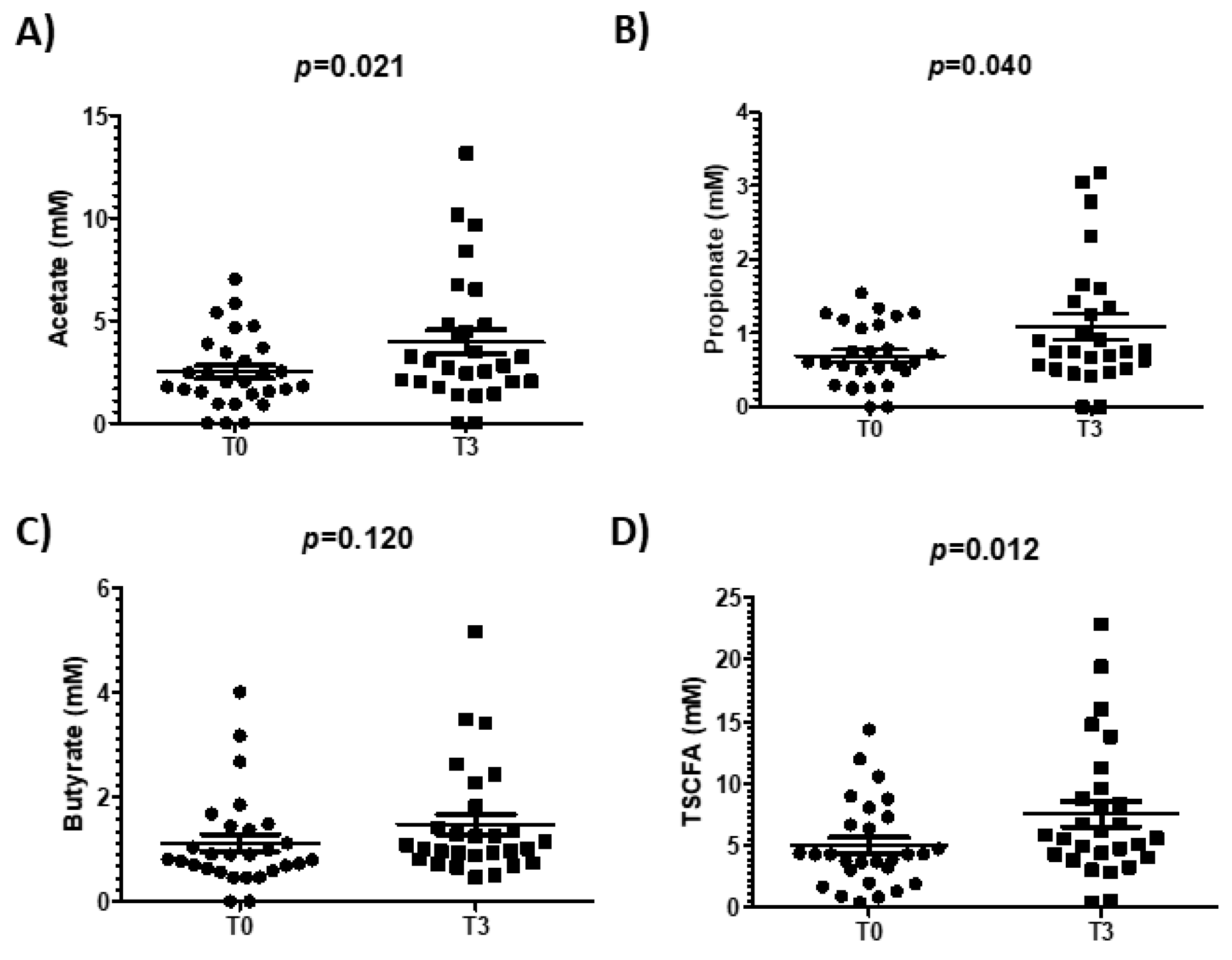 Table 1. Clinical and nutritional characteristics of the participants.
Table 1. Clinical and nutritional characteristics of the participants.
Results are presented as mean ± SD and percentage (%). SFA: saturated fatty acids; MUFA: monounsaturated fatty acids; PUFA: polyunsaturated fatty acids. p < 0.05 for comparison the clinical and nutritional characteristics between UMs. MD: Mediterranean diet adherence.
© 2019 by the authors. Licensee MDPI, Basel, Switzerland. This article is an open access article distributed under the terms and conditions of the Creative Commons Attribution (CC BY) license (http://creativecommons.org/licenses/by/4.0/).
We use cookies on our website to ensure you get the best experience. Read more about our cookies here.
Accept
We have just recently launched a new version of our website. Help us to further improve by taking part in this short 5 minute survey here. here.
Never show this again