Animal studies have shown the beneficial effect of betaine supplementation on reducing body fat, while the data from human studies are controversial and inconsistent. The objective of the present systematic review was to investigate the effects of betaine intervention on treating obesity in humans and quantitatively evaluate the pooled effects based on randomized controlled trials with a meta-analysis. The PubMed and Scopus databases, and the Cochrane Library, were searched up to September 2019. Weighted mean differences were calculated for net changes in obesity-related indices by using a random-effects model. Publication bias was estimated using Begg’s test. Six studies with 195 participants were identified. Betaine supplementation significantly reduced the total body fat mass (−2.53 kg; 95% CI: −3.93, −0.54 kg; I2 = 6.6%, P = 0.36) and body fat percentage (−2.44%; 95% CI: −4.20, −0.68%; I2 = 0.0%, P = 0.44). No changes were observed regarding body weight (−0.29 kg; 95% CI: −1.48, 0.89 kg; I2 = 0.00%, P = 0.99) and body mass index (−0.10 kg/m2; 95% CI: −5.13, 0.31 kg/m2; I2 = 0.00%, P = 0.84). The results suggested that dietary betaine supplementation might be an effective approach for reducing body fat.
Keywords: betaine; body fat; obesity; clinical trial; meta-analysis betaine; body fat; obesity; clinical trial; meta-analysis

Excess body fat accumulating in the body leads to obesity, which is recognized as a chronic disease and is correlated with multiple health problems, such as type 2 diabetes, cardiovascular diseases, and cancers [1,2]. Over the past decades, the prevalence of overweight and obesity has increased substantially and now affects over 600 million people worldwide [3]. Currently, effective weight reduction and maintenance strategies, such as lifestyle modification or dietary intervention have been paid increasing attention. Of these, supplementary dietary nutrients from natural products have achieved a great performance in the prevention of obesity.
Betaine is a zwitterionic quaternary ammonium compound, a methyl derivative of glycine and a byproduct isolated from molasses during sugar beets refinement. In addition to sugar beets, betaine is abundant in many other foods, such as spinach, whole grains and seafood. In adults, daily average betaine intake is approximately 100–400 mg [4]. When healthy subjects orally take betaine, it is freely filtered in the kidney, re-absorbed into the blood circulation, and either absorbed and stored in tissues as an organic osmolyte to protect cells under stress or as a catabolic source of methyl groups via transmethylation of homocysteine (Hcy) [5]. In addition to direct dietary intake of betaine or betaine-containing foods, humans can also obtain betaine via choline oxidation in the liver and kidney [6]. To date, numerous studies have discussed the relationships between betaine treatment and human health. Betaine supplementation was reported to be beneficial to human health, including preventing cancers [7,8], improving liver function [9], decreasing serum homocysteine levels [10] and attenuating chronic inflammation [5].
The favorable effect of betaine on reducing body fat has been proved in animals, such as rodents [11], pigs [12] and fowls [13]. In livestock husbandry, betaine has also been used as a feed additive for reducing carcass body fat percentage [14]. However, data from humans are rare. Few randomized controlled trials (RCTs) have been conducted to evaluate supplemental betaine on obesity, while the results are inconsistent. In a study examining 42 obese subjects with 6 g/day betaine treatment for 12 weeks (2002) [15] and another study involving 17 young males with 2 g/day betaine supplementation for 10 days (2012) [16], no change of obesity-related indices were found. Meanwhile, 4 g/day betaine treatment for 24 weeks also had no effect on body weight and BMI in healthy young subjects [17]. In 2013, a study by Cholewa et al. first proved in 11 young and lean males that a 2.5 g/day betaine supplementation with a 6-week progressive resistance training program significantly improved body composition (reduced fat mass and increased lean mass) [18]. A systematically review was subsequently published by the same group in 2014 and concluded that there are potential beneficial effects of betaine on body composition in humans [19]. Recently, two RCTs, investigating the effect of betaine supplementation on reducing body fat, were published in 2018. Cholewa et al. showed 2.5 g supplementary betaine per day with 9 weeks exercise training in 11 young women decreased body fat more than 12 placebo treatment subjects [20]. Grizales et al. found 3.3 g betaine twice orally for 10 days, then 4.95 g betaine twice orally for 10 days in 14 prediabetes and obese participants showed a reduction in body weight and BMI compared with 13 participants treated with placebo, even though the trend was not significant [21]. The results of these reports regarding the effects of betaine on obesity or improving body composition in humans need to be objectively reviewed and summarized.
Therefore, to provide an up-to-date evaluation of the roles of betaine in obesity, we systematically reviewed the literature and conducted a meta-analysis on RCT studies regarding betaine and obesity or body composition in humans. We hypothesized that betaine treatment reduces body fat in humans.

The present study was performed according to the recommendations of the Preferred Reporting Items for Systematic Reviews and Meta-Analysis (PRISMA) statement [22].

A trial that met the following criteria was incorporated in the present study: (1) conducted in adults; (2) RCTs of either parallel or cross-over design; (3) used betaine as the only intervention in subjects; and (4) provided the available data to calculate the mean differences between baseline and endpoint for obesity-related indices, including body weight, BMI, waist circumference, body fat, and body fat percentage.

Data extraction was independently conducted by two investigators (X.G. and H.Z.), and any discrepancy was resolved via discussion. The basic information of the eligible trials was extracted, such as surname of first author, published year, region/nation, mean age of participants, sample-size, gender, types of intervention and duration of intervention. For each trial, the means and standard deviations (SDs) of obesity-related indices at baseline and endpoint in both the control and intervention groups were extracted. For studies with multiple time points for the same participants, only the last endpoint was used for analysis. If the trial did not provide the SDs directly, we calculated them from standard error of the mean (SEM) or 95% confidence interval (CI) by using the equation listed in the Cochrane handbook [23].
Quality assessment for RCT trials was carried out with Jadad score criteria [24], including the following items: (1) randomization; (2) random sequence generation; (3) reporting the reasons for withdraws and dropouts; (4) blinding and (5) allocation concealment. The trials scored one point for each aspect reported. Trials with Jadad score ≥ 4 were classified as high quality.

A random-effects model described by DerSimonian and Laird was performed to calculate the pooled effects of and corresponding 95% CI for each obesity-related index [25]. Heterogeneity among studies was assessed with I2. The I2 represented the proportion of total variation, and the low, moderate and high degrees of heterogeneity were defined based on values of 25%, 50% and 75% as cut-off points [26]. We determined that there was no significant heterogeneity among trials when I2 < 50%. Begg’s test was adopted to examine publication bias with a significant level at P < 0.1 [27]. Statistical analysis was conducted using STATA 11.0 for windows (Stata CORP, College station, TX, USA). Two-tailed p-value < 0.05 was considered as significant.

3.1. The Process of Study Selection

The literature search result is presented in Figure 1. A total of 1837 potentially relevant titles and abstracts were identified from PubMed, Scopus and the Cochrane Library. After ruling out animal studies, cell studies and those irrelevant to the aim of this meta-analysis, six articles were found to be eligible for data synthesis [15,16,17,18,20,21].

3.2. The Characteristics of Inclusive Studies

The basic information of the included studies is listed in Table 1. Three trials were conducted in USA [18,20,21], and three other trials were carried out in Finland [15,17], and Brazil [16], respectively. Two trials used training programs during the betaine supplementation period [18,20] and four others were instructed not to exercise [15,16,17,21]. On the basis of Jadad scoring criteria, five trials were regarded as high-quality.

In conclusion, this systematic review and meta-analysis provided further evidence that supplemental betaine could reduce body fat in human subjects. Dietary betaine supplementation might be an effective approach for treatment of obesity and improving body composition. Given the favorable benefits identified through the meta-analysis, additional RCTs with larger sample sizes, comparable doses, wider range of ages and various obese statuses are warranted to make further insights into this topic.

This research was funded by National Natural Science Foundation of China (NSFC: 81773433), the Key scientific Research Projects in Shandong Provence China (2017YYSP007), the Natural Science Foundation of Shandong Province (No. ZR2019PC014) and by the 2018 Chinese Nutrition Society (CNS) Nutrition Research Foundation-DSM Research Fund (CNS-DSM2018A30). The funders have no role in study design, data collection and analysis, decision to publish, or preparation of the manuscript. 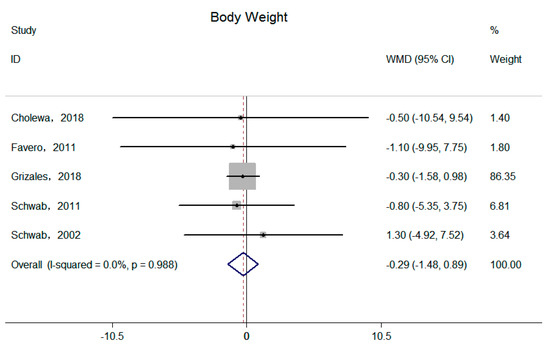 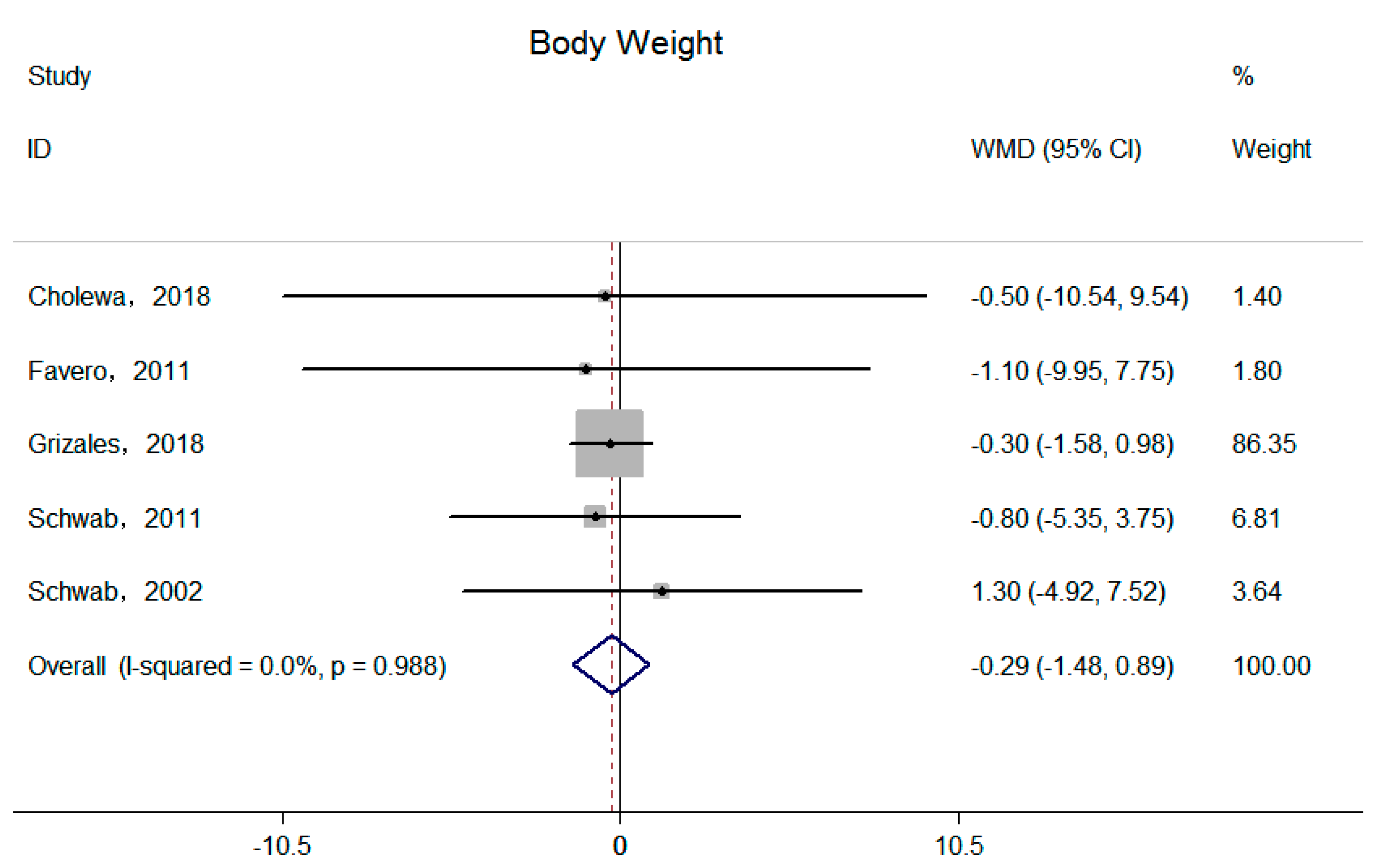 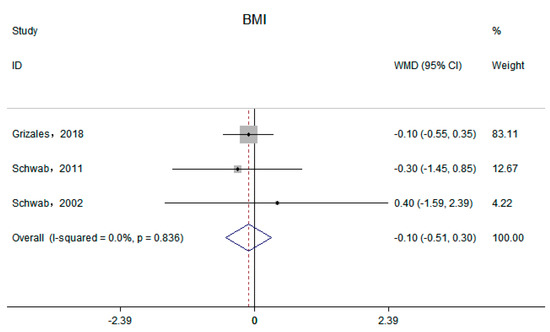 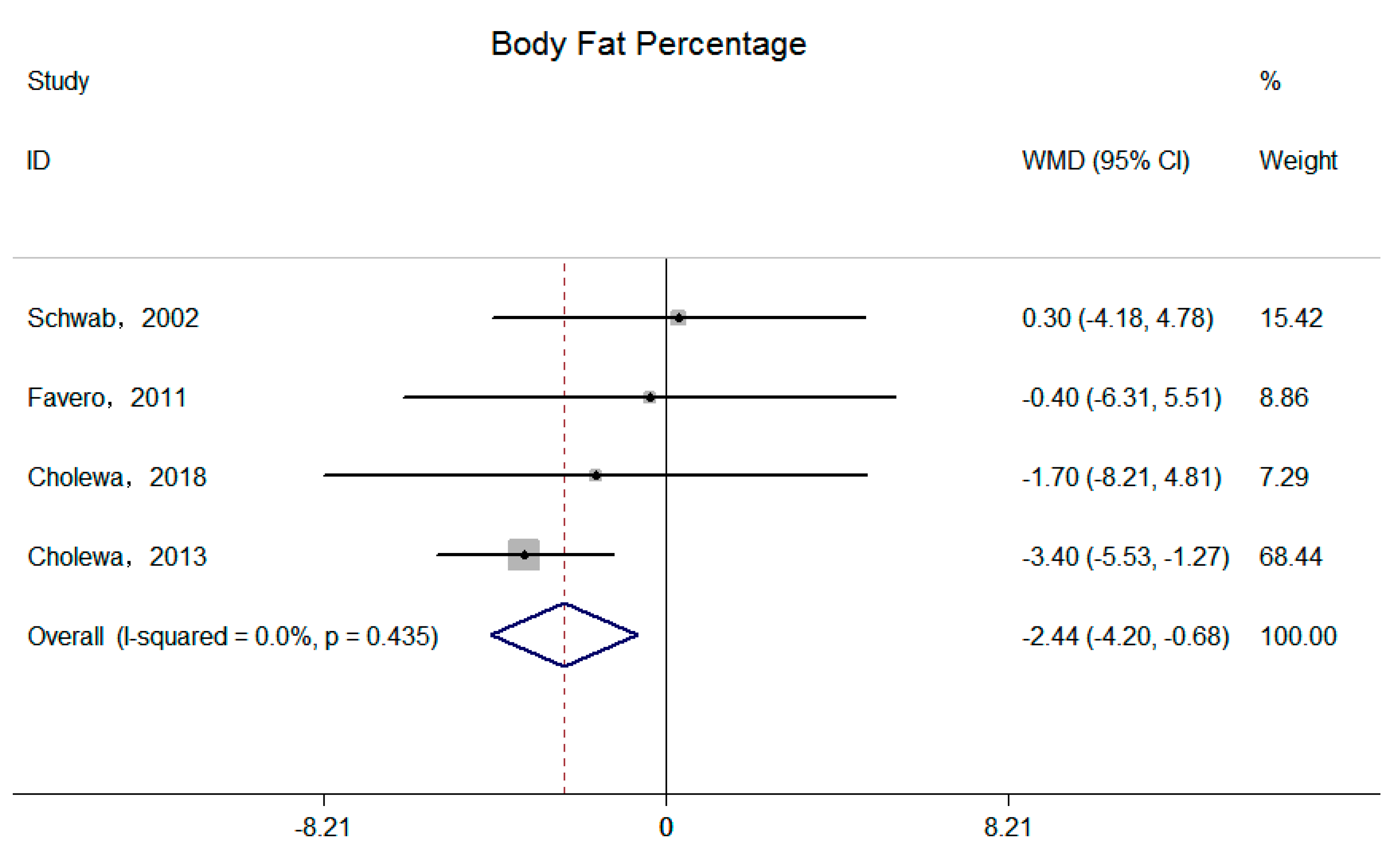 Table 2. Results of publication bias test.
Table 2. Results of publication bias test.
© 2019 by the authors. Licensee MDPI, Basel, Switzerland. This article is an open access article distributed under the terms and conditions of the Creative Commons Attribution (CC BY) license (http://creativecommons.org/licenses/by/4.0/).
We use cookies on our website to ensure you get the best experience. Read more about our cookies here.
Accept
We have just recently launched a new version of our website. Help us to further improve by taking part in this short 5 minute survey here. here.
Never show this again