The present study drew on resources from the Medical Birth Registry of Norway (MBRN) and Statistics Norway (SSB) for the period 1999–2016 [22,23]. The data were linked using the national identity number, which is given to all Norwegian citizens and to foreigners with a permit to stay in Norway. The study unit of interest was the women’s pregnancy. Hence, the use of folic acid supplements was counted only once in women with multiple births (the proportion of multiple births was 1.77%). Initially, our study comprised 1,056,396 non-terminated pregnancies after gestational week 12. Of these, we excluded 510 pregnancies where information on the country of birth for the mother was missing, leaving data on 1,055,886 pregnancies and 612,054 women for analysis.

Maternal country of birth among 1st generation immigrant women was obtained from SSB and was analyzed directly as a categorical variable including the 40 largest maternal countries of birth, i.e., those contributing to the most births during the study period. All other countries were grouped and analyzed as other countries. Based on information on women’s country of birth, we also analyzed immigrant women according to the seven Global Burden of Disease super regions [24]: Central Europe, Eastern Europe, and Central Asia; High-income; Latin America and Caribbean; North Africa and Middle East; South Asia; Southeast Asia, East Asia, and Oceania; and Sub-Saharan Africa.

Length of residence was defined as the year of childbirth in the MBRN minus the year of immigration to Norway. The year of immigration was extracted from the registration date when immigrants are allocated a national identity number at the National Registry [25]. This number is essential for all public correspondence in Norway, and is only provided to foreigners with a valid residence permit of more than six months [25]. Length of residence was analyzed as a categorical variable using the time categories chosen a priori: <1, 1–2, 3–4, 5–10, 11–20, >20 years.

Additional variables derived were year of birth, maternal age at the time of birth, parity (0, 1, 2, 3, ≥4 previous births), marital status at birth (married, partner, single/other), maternal income (quartiles calculated for the whole study period), and maternal educational level (no education, primary education (1–10 years), secondary education (11–14 years), university/college (14–20 years)). All these variables have been previously associated with supplemental folic acid use in Norway [8], and were included as adjustment variables in the present analyses. We also adjusted for Norwegian health region (south-east, west, middle, north) to account for potential geographical variation in supplemental folic acid use.

To examine the associations of immigrant category, country of birth, and length of residence with folic acid supplement use, we estimated odds ratios (ORs) with 95% confidence intervals (CIs) using binary logistic regression analyses. We incorporated immigrant category, country of birth, and length of residence in the regression models as independent categorical variables using Norwegian-born women with two Norwegian-born parents (i.e., non-immigrants) as the reference category.
We calculated both crude and adjusted ORs with 95% CIs. The adjustment variables were year of birth, maternal age, marital status, parity, health region, maternal income, and education. To account for non-linear relations, we included the continuous variables year of birth and maternal age at birth as polynomial quadratic model terms. To account for dependence among pregnancies by the same mother, we used robust standard errors (i.e., clustered Sandwich estimator) that allowed for within-mother clustering.
We performed the analyses in R 3.4.2 for Windows [26]. To avoid list-wise deletion and potential bias due to missing data in covariates (missing data are provided in Table 1), we used the predictive mean matching algorithm to create five multiply imputed datasets based on the rms-package in R [27]. The imputation model included the same variables as those contained in the final analytical models. The pooling of ORs with 95% CIs across datasets were performed using Rubin’s combination rules.

2.9. Ethics Approval and Consent to Participate

The study has been approved by the South East Regional Committees for Medical and Health Research Ethics in Norway (Folder number: 2014/1278). The approval includes the use of individual record linked data from the Medical Birth Registry of Norway and Statistics Norway.

The remaining results will focus on folic acid supplement use among 1st generation immigrant women who came from more than 200 countries during the study period 1999–2016. Notably, 1st generation immigrant women from high-income countries, and Central Europe, Eastern Europe, and Central Asia constituted the largest group overall (Table 2), and women from Central Europe, Eastern Europe, and Central Asia had the largest increase in births during the period (data not shown). However, the five largest specific country groups were women from Somalia (7.4%), Poland (7.1%), Sweden (6.1%), Iraq (5.3%), and Pakistan (5.0%).

3.4. Folic Acid Supplement Use by Country of Birth in 1st Generation Immigrant Women

The reported folic acid supplement use in 1st generation immigrant women was lowest among women from Sub-Saharan Africa and those coming from North Africa and the Middle East (Table 2). When investigating folic acid supplement use by specific countries, the prevalence varied from 8% in Somali women to 41% in women from the United States (Figure 2). The lowest use, in terms of adjusted ORs, was observed in immigrant women from Eritrea, Ethiopia, Morocco, and Somalia. The highest use was observed in immigrant women from the United States, the Netherlands, Denmark, and Iceland. These associations remained essentially the same when restricting the analyses to the three last study years 2014–2016 (Figure S1).

3.5. Folic Acid Supplement Use by Length of Residence in 1st Generation Immigrants

With the exception of a few groups with initially high use (Denmark, Great Britain, Iceland, Netherlands, and Poland), women from nearly all countries increased their use with length of residence in Norway (Figure 3). Still, in overall analyses, folic acid supplement use in immigrant women was lower than that of Norwegian-born women, even after 20 years of residence (Table 3; OR 0.63 (0.60–0.67)). The slowest increase in prevalence in groups with initially low use was seen in women from China, India, Morocco, Turkey, and Vietnam.

This national population-based study from Norway shows that immigrant women from a large number of countries use folic acid supplements to a lesser degree than non-immigrants. In addition, we found that this lower use remained, even many years after settlement. This suggests that the current recommendations and intervention programs to increase folic acid supplement use in fertile women should be better adapted for immigrant women in Norway. 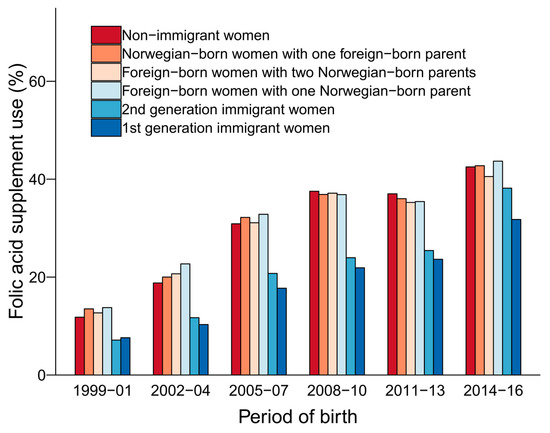 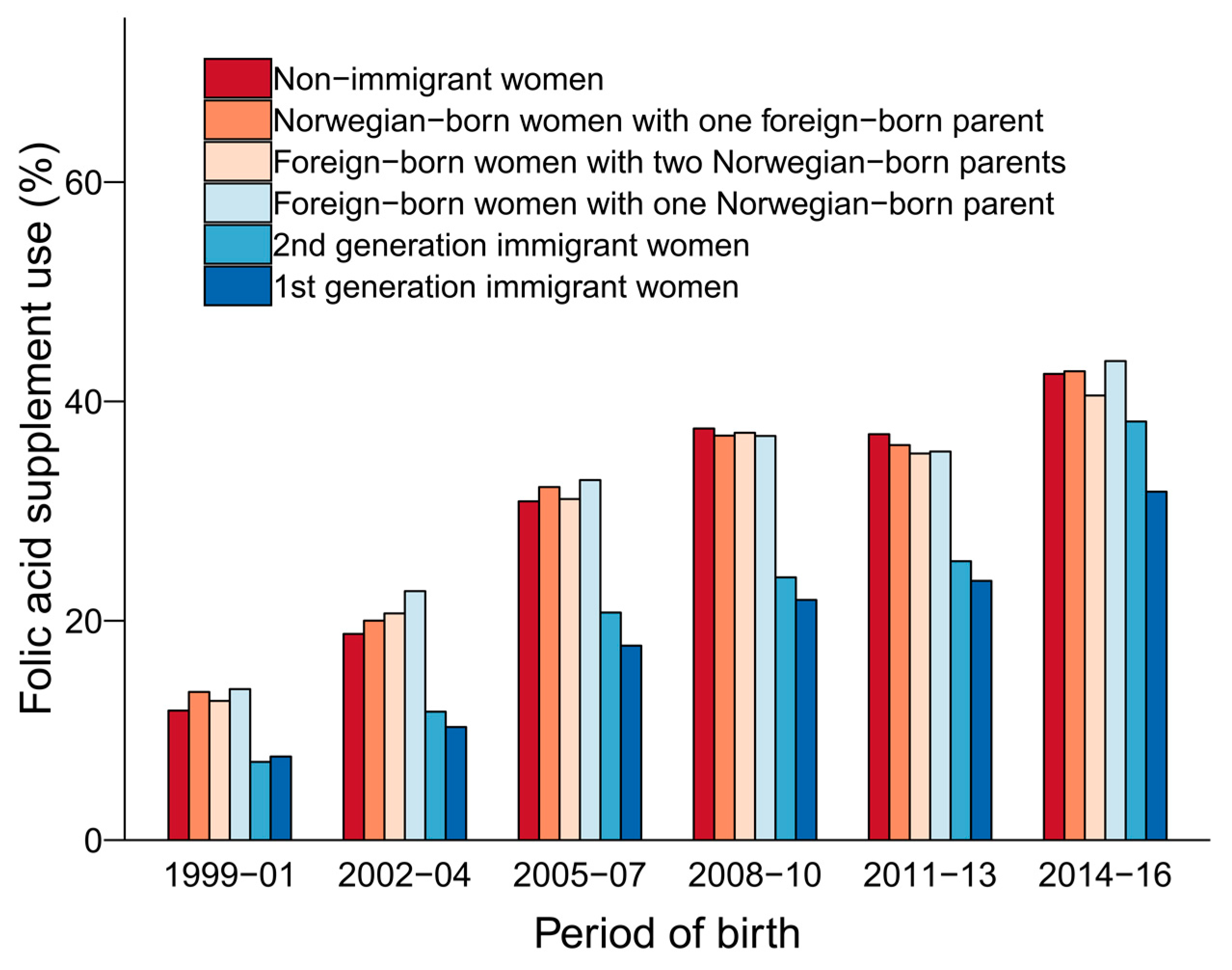