Effects of Coffee and Tea Consumption on Glucose Metabolism: A Systematic Review and Network Meta-Analysis

Prospective cohort studies have described an association between coffee or tea consumption and the risk of developing diabetes. However, whether coffee or tea improves glucose metabolism remains uncertain. We investigated the effect of coffee and tea on glucose metabolism by conducting a systematic review and meta-analysis of randomized controlled trials. Electronic databases were searched for articles published up 19 February 2017. The primary endpoint was the mean difference in post-intervention fasting blood glucose (FBG) levels between the groups. Of 892 citations screened, 27 studies (1898 participants) were included in our meta-analysis. A network meta-analysis suggested that green tea, but not caffeinated/decaffeinated coffee or black tea, may reduce FBG levels, compared with placebo/water (−2.10 mg/dL; 95% confidence interval (CI), −3.96 to −0.24 mg/dL; p = 0.03; moderate quality of evidence). In a subgroup analysis, the effect of green tea on FBG levels was statistically significant only in studies with a mean age of < 55-years-old or Asian-based studies. The oolong tea group also showed a significant decrease in FBG, but the quality of evidence was very low. In conclusion, green tea consumption might decrease FBG levels, especially in < 55-year-olds or Asian-based populations.
Keywords: coffee; tea; glucose metabolism; fasting blood glucose; network meta-analysis coffee; tea; glucose metabolism; fasting blood glucose; network meta-analysis

The number of people with diabetes is increasing rapidly, worldwide. The International Diabetes Federation reported that in 2015, 415 million adults had diabetes and that by 2040, this number is expected to rise to 642 million [1]. In 2015, the global economic burden associated with diabetes reached US$1.31 trillion, becoming a substantial global economic burden [2]. Therefore, low-cost and easily accessible strategies for preventing diabetes are required. Globally, coffee and tea are widely consumed beverages and their consumption is integrated into people’s daily lives. A large body of epidemiological evidence, from prospective cohort studies, suggests a strong association between coffee/tea consumption and a decreased risk of diabetes [3,4,5,6]. If the associations are causal, there would be substantial public health implications. However, whether or not these beverages reduce glucose metabolism remains uncertain. Previous meta-analyses of clinical trial data have investigated the effects of coffee or tea consumption on glucose metabolism [7,8,9]. Unfortunately, these meta-analyses have not evaluated tea and coffee comprehensively; have included duplicate studies [7]; have evaluated only acute effects [10]; and did not evaluate the quality of evidence across studies [7,8,9], using approaches such as the Grading of Recommendations Assessment Development and Evaluation (GRADE) system [11]. Together, these weaknesses limit the interpretation of the results and provide insufficient information to make relevant judgments.
Network meta-analysis (NMA) is a method that enables the comparison of multiple interventions using direct and indirect comparison evidence even when direct comparisons of data are insufficient [12]. Hence, we performed a systematic review that involved an NMA, using the GRADE system to comprehensively evaluate the effects of coffee and tea consumption on glucose metabolism.

This study was conducted according to a predetermined protocol (PROSPERO # CRD42015029597) developed using the Preferred Reporting Items for Systematic Reviews and Meta-Analysis for Protocols [13,14]. We systematically searched PubMed, Embase, and the Cochrane library for eligible randomized, controlled clinical trials published before February 19, 2017 without any language restrictions. The literature search involved querying the terms “coffee,” “tea,” “glucose,” “HbA1c,” “insulin,” “insulin resistance,” and “randomized controlled trial (RCT).” In addition, we manually searched the references included in each original article retrieved. The details of the literature search strategy are described in the Supplementary Table S1.

We included studies examining the effects of caffeinated coffee, decaffeinated coffee, black tea, oolong tea, and green tea (caffeinated or decaffeinated), given as a drink or crude extract, with follow-up durations of at least 2 weeks. We excluded studies examining multi-nutrient supplements, in addition to coffee or tea as interventions. Studies were selected for this analysis only if they also described an RCT in human adults involving either a parallel or crossover design and had at minimum, fasting blood glucose (FBG) or hemoglobin A1c (HbA1c) results available for each group. In cases involving multiple publications of the same study, the most informative article was included.

We examined the effects of the studied interventions after combining green tea and green tea extract into a single group referred to as green tea. Decaffeinated green tea and decaffeinated green tea extract interventions were also combined into a single decaffeinated green tea group. A standard, pairwise meta-analysis was conducted for each pairwise direct comparison of interventions (caffeinated coffee, decaffeinated coffee, black tea, oolong tea, caffeinated green tea, and decaffeinated green tea). The outcome data (post-intervention values) were extracted for subsequent analyses. When studies reported data for different durations of intervention, the duration for the pre-defined primary endpoint in each study, was used in the analyses. If the standard deviations of the endpoints were missing, pooled standard deviations were calculated from the other included studies [16]. We used a random-effects model to incorporate the assumption that different studies estimated different yet related intervention effects. Publication biases or small study effects were examined using conventional funnel plots.
In addition, we conducted network meta-analyses within the frequentist framework using multivariate random-effects meta-analysis models, which consider the heterogeneity of effects across studies. The results for the comparative effects are presented as mean difference estimates and 95% confidence intervals (CIs). We plotted a comparison-adjusted funnel plot to detect the presence of publication bias in the network meta-analysis. We also evaluated the ranking of the intervention effect, i.e., the most efficacious beverage, second best, third best, etc. Inconsistency between the direct and indirect evidence on the network was evaluated using global and local inconsistency tests [17].
Stata 14 software (Stata, College Station, TX, USA) was used for the analyses. The “metan” package [18] was used to conduct the pairwise random-effects meta-analyses and the “metareg” package [19] was used for the meta-regression analyses; the “network” package [20] was used for the NMAs. The p-values < 0.05 were considered statistically significant.

Of the 892 citations identified, 27 studies involving 1898 subjects were included in our meta-analysis (Figure 1) [21,22,23,24,25,26,27,28,29,30,31,32,33,34,35,36,37,38,39,40,41,42,43,44,45,46,47]. The characteristics of the included studies are shown in Table 1. Of these studies, effects were reported on FBG concentrations (26 studies), 75-g OGTT 2h-PG concentrations (4 studies), HbA1c (10 studies), fasting IRI concentrations (13 studies), and HOMA-IR (8 studies); no studies reported results on HOMA-ß. Figure 2 shows the network plots of eligible comparisons for FBG, 75-g OGTT 2h-PG, HbA1c, fasting IRI, and HOMA-IR. Six classes of interventions (coffee, decaffeinated coffee, green tea, decaffeinated green tea, black tea, oolong tea) had adequate numbers of studies for NMA. The effects of coffee and decaffeinated coffee were indirectly and directly compared. The differences between direct and indirect evidence in closed loops in the network showed no indication of inconsistency.

3.2. Risk of Bias for Included Studies

The included studies generally had unclear or high risks of bias for random sequence generation, allocation concealment, blinding of participants and personnel, blinding of outcome assessments, and selective outcome reporting. The Cochrane risk of bias analysis indicated among the studies with a high risk of bias, blinding of the participants and personnel was highest (51.9%); selective reporting contributed the most to the unclear-domain bias (63.0%). Furthermore, 59.3% of the studies were judged to have an unclear or high risk of bias for either domain or selection bias, which may have seriously distorted the validity of each study. Details regarding the risk of biases are shown in Figure 3.

Four studies [22,23,28,33] reported the effects of the interventions on 75-g OGTT 2h-PG concentrations, including two studies [28,33] involving green tea and two [22,23] involving both coffee and decaffeinated coffee. Neither the direct pairwise meta-analysis nor the NMA showed any significant effects associated with coffee, decaffeinated coffee, or green tea on 75-g OGTT 2h-PG concentrations relative to a placebo/water (Table 3, Supplemental Figure S3). The comparison-adjusted funnel plot (Supplemental Figure S4) does not show any evidence of asymmetry.

Eight studies [22,23,30,31,32,41,42,43] reported the effects of the interventions on HOMA-IR, including two involving both coffee and decaffeinated coffee [22,23], 3 [30,31,32] involving green tea, and three [41,42,43] involving decaffeinated green tea. There were no significant effects of these interventions on HOMA-IR levels relative to placebo/water in the direct pairwise meta-analysis or in the NMA (Table 6, Supplemental Figure S9). Additionally, the comparison-adjusted funnel plot (Supplemental Figure S10) did not show any evidence of asymmetry.

In conclusion, this systematic review and NMA of 27 studies, involving 1898 subjects and having a moderate quality of evidence, indicates that green tea consumption, compared with a placebo/water, might slightly lower FBG concentrations. Oolong tea consumption also resulted in significant decreases in FBG concentrations in the NMA but the studies suffered from a very low quality of evidence. Further, studies with a moderate quality of evidence indicated that caffeinated coffee consumption may increase insulin concentrations. The effects of consuming coffee or tea on HbA1c, 75-g OGTT 2h-PG, HOMA-IR, and HOMA-ß are limited and uncertain. Although further efforts are required to confirm the benefit of green tea on glucose metabolism, our study provides supportive evidence that green tea might lower FBG concentrations, possibly leading to a reduction in the number of people developing diabetes as a result of regular consumption.

Y.K. and A.G. designed the protocol of systematic review. Y.K. and A.G. did the literature search and selected studies for inclusion. Y.K. and A.G. extracted data for analysis. Y.K. and A.G. performed the statistical analysis and interpreted the data. H.N. checked statistical methodology. Y.K. wrote the first draft and all authors revised the manuscript for important intellectual content. All authors approved the final draft.

Health sciences research grants (comprehensive research on lifestyle-related diseases, including cardiovascular diseases and diabetes mellitus, H25-016 and H25-029) from the Ministry of Health, Labour and Welfare of Japan. JSPS KAKENHI (grant number 15K21389, 18K10095) from the Japan Society for the Promotion of Science (JSPS). AMED (grant number JP18ck0106370) from Japan Agency for Medical Research and Development.

All authors have no potential conflict of interest. 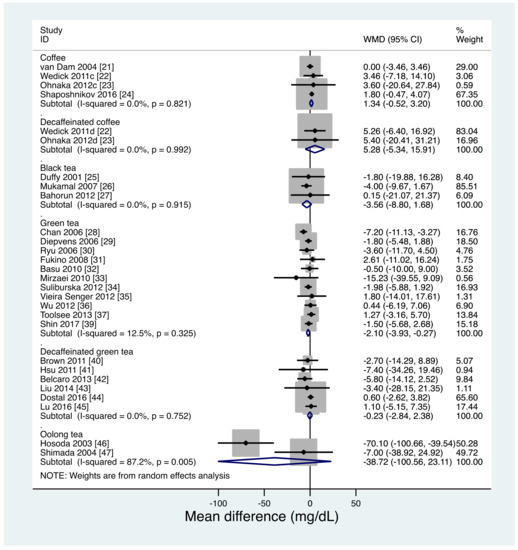 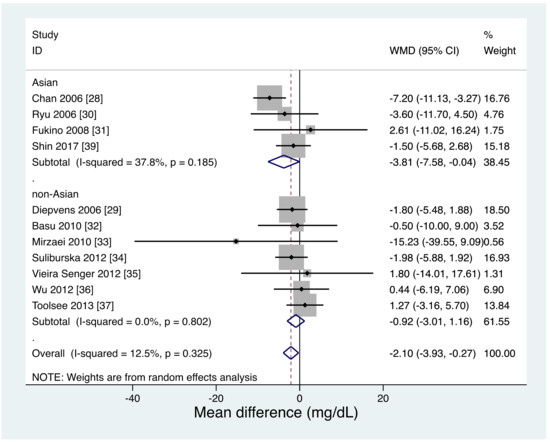