The Effect of Vitamin D Supplementation on Hepcidin, Iron Status, and Inflammation in Pregnant Women in the United Kingdom

Vitamin D deficiency and anemia frequently coexist [1,2,3,4,5]. A number of mechanisms could explain this association [1] and recent data provide evidence for a direct role of vitamin D in the suppression of hepcidin: the primary regulator of systemic iron homeostasis. Hepcidin inhibits and ultimately degrades ferroportin, the transmembrane protein that transports iron, and therefore controls the amount of iron absorbed in the intestine and released from cellular storage. Hepcidin is suppressed when iron status is low to maximize dietary iron absorption and the release of iron from stores. Conversely, inflammation causes an increase in hepcidin concentration that reduces dietary iron absorption and the capacity for iron egress from cells, resulting in decreased hemoglobin concentrations [6].
In vitro work has shown a 1,25-dihydroxyvitamin D (1,25(OH)2D; the active metabolite of vitamin D)-induced, dose-dependent decrease in hepcidin expression [7,8]. The identification of the vitamin D response element (VDRE) on the human hepcidin promoter also supports the direct effect of 1,25(OH)2D [8]. Recent in vivo studies in healthy adults further support an effect of both single and longer-term high doses of vitamin D on hepcidin regulation. An increase in 25-hydroxyvitamin D concentration (25OHD; the status marker of vitamin D) of 68 to 109 nmol/L 72 h after an oral dose of 100,000 IU vitamin D2 was accompanied by a 34% decrease in hepcidin concentration (n = 7) [8]. A further study found a 73% decrease in hepcidin concentration one week after a single dose of 250,000 IU vitamin D3 (n = 18) [9]. In early-stage, chronic kidney disease patients, the percentage increase in 25OHD concentration after 3 months of vitamin D3 supplementation (50,000 IU vitamin D3/week) was associated with an inverse change in hepcidin concentration (n = 38) [7]. In addition to the effects on hepcidin concentration, vitamin D may also have immunomodulatory effects which may in turn alter hepcidin expression and iron status [10,11,12].
Pregnant women are at high risk of anemia [13,14] due to the high iron demands of pregnancy, particularly in low-resource settings, and data suggest associations between low hemoglobin, low iron status, and adverse birth outcomes [15]. Improvements in iron stores and hemoglobin concentrations are associated with increases in birth weight [16]. There is conflicting evidence as to whether C-reactive protein (CRP), as a marker of inflammation, rises [17] or remains the same during pregnancy [18]. However, inflammation may be relevant in pregnant women affected by conditions such as obesity or pre-eclampsia, known to be associated with inflammatory states [19]. Low vitamin D status may be a contributing factor to iron deficiency anemia via direct effects on hepcidin or through potential inflammatory effects of low vitamin D status.
The effect of vitamin D supplementation on iron status has not been investigated in pregnant women. Through the mechanisms outlined above, adequate vitamin D status may be necessary for optimal hepcidin function and may help to provide protection against iron deficiency, potentially offering a complementary approach to combat anemia during pregnancy.
The aim of this current study was to examine if daily vitamin D3 supplementation (cholecalciferol, 1000 IU/day) in pregnancy suppresses hepcidin concentration and/or affects iron body stores (ferritin) and inflammation (CRP and α1-acid glycoprotein (AGP)) compared to placebo.

The original MAVIDOS study (Maternal Vitamin D Osteoporosis Study) has been described previously in full [20,21]. In brief, MAVIDOS was a multicenter, double-blinded, randomized, placebo-controlled trial conducted between October 2008 and February 2014 and is registered in the International Standard Randomized Control Trial Registry (ISRCTN 82927713) and the European Clinical Trials Database (EudraCT 2007-001716-23). Women over the age of 18 years with a singleton pregnancy were recruited at their early pregnancy ultrasound scan. Women were screened for vitamin D status, and only those with 25OHD concentrations between 25 and 100 nmol/L and who were not currently taking dietary supplements with more than 400 IU of vitamin D/day were eligible. Exclusion criterion included any known metabolic or chronic disease known to interfere with bone metabolism, taking medication that might interfere with intrauterine growth, foetal anomalies at the 18–21 weeks ultrasound scan, and diagnosis of cancer in the last 10 years. Women were screened for eligibility at 10–17 weeks gestation and were then randomized to receive oral vitamin D3 (cholecalciferol 1000 IU/day; n = 565) or matched placebo (n = 569) (Merck KGaA, Darmstadt, Germany) from ~14 weeks gestation until delivery. Randomization was achieved by a computer-generated sequence in randomly permuted blocks of ten, and both the participants and research team were masked to treatment allocation.
Vitamin D status (as measured by circulating 25OHD concentration) in the UK population changes markedly depending on season; reflecting the availability of UVB irradiation and capacity for endogenous vitamin D synthesis. During the months of September to March/April [22] there is little capacity for endogenous synthesis and so maintenance of vitamin D status relies on dietary or supplemental sources of vitamin D. Therefore, women from the MAVIDOS study who gave birth in the springtime (March–May) and with a blood sample available at both early (~15 weeks) and late (~34 weeks gestation) pregnancy (n = 195) were selected for this substudy as we anticipated seeing the greatest treatment group difference in change in 25OHD concentration from early to late pregnancy and minimal endogenous vitamin D production.
Ethical approval for the original trial was obtained by the Southampton and South West Hampshire Research Ethics Committee and written informed consent was obtained from all participants. The additional analyses measured as part of this sub-study were within the remit of the original ethics application.

Maternal age, self-reported ethnicity, parity, and gestational age (determined by ultrasound) were recorded in early pregnancy and weight and height were recorded in early and late pregnancy. Supplement use within the last 3 months was recorded using a questionnaire in early and late pregnancy and was coded into whether or not the supplement included iron. As determined by the return of empty packs, 87% of women took at least 80% of the treatment tablets provided.

Venous blood samples were collected in early and late pregnancy into lithium heparin-coated tubes and the plasma were stored at −80 °C for subsequent analysis at MRC Elsie Widdowson Laboratory, Cambridge, UK. Hepcidin was measured by ELISA (Hepcidin 25 bioactive HS, DRG Diagnostics, Marburg, Germany; inter-assay % coefficient of variation (%CV) between 8–13) and ferritin, CRP, and AGP was measured on the automated platform by Dimension Xpand, Siemens (ferritin and high sensitivity-CRP kits from Siemens Healthcare, Erlangen, Germany, and AGP kits from Sentinel Diagnostics, Milano, Italy. Intra-assay %CV was <6 for ferritin and CRP and <11 for AGP). 25OHD had been measured as part of the main trial by radioimmunossay (Liaison, RIA automated platform, Diasorin, Stillwater, MN, USA) as previously described and was DEQAS accredited [21].

Statistical analysis was performed using Stata 14.1 (Stata Statistics and Data Analysis, College Station, TX, USA) on an intention to treat basis. Variables were assessed for normality. Normally distributed data are presented as mean (standard deviation (SD)) and non-normally distributed data are presented as median (interquartile range (IQR)). Treatment group differences were assessed using 2-sample t-tests for normally distributed variables, Mann–Whitney U tests for non-normally distributed variables and chi-squared tests for categorical variables. Proportions of iron deficient women were compared between treatment groups using chi-squared tests. Changes in variables over time were tested within each treatment group using paired t-tests for normally distributed, Wilcoxon signed-rank tests for non-normally distributed and McNemar’s tests for categorical variables. Differences between treatment groups in changes in characteristics were tested for using regression models with late pregnancy value as the outcome and early pregnancy value and treatment group as predictors, to account for regression to the mean. Linear regression models were fitted with 25OHD concentration as the predictor and hepcidin, ferritin, CRP, and AGP concentrations as outcomes. Hepcidin, ferritin, and CRP were transformed to normality using Fisher–Yates transformation [23] and are presented in SD units. The presented coefficients are those associated with a 10 nmol/L change in 25OHD concentration. Percentage changes in hepcidin and 25OHD concentrations from early to late pregnancy were calculated and transformed to normality using the Fisher–Yates transformation. Percentage change in 25OHD concentration was examined as a predictor of percentage change in hepcidin concentration using a linear regression model. CRP > 5 mg/L [24] and/or AGP > 500 mg/L were considered indicative of inflammation. There were no AGP concentrations >1000 mg/L so the lower cut-off of 500 mg/L was used [24]. Ferritin concentrations <15 μg/L were considered indicative of iron deficiency [25]. Thresholds for 25OHD of <25 nmol/L and <50 nmol/L were used to assess vitamin D status [26].

Women giving birth in spring were mean (SD) 30 (5) years old, predominantly white, 47% nulliparous, and were seen at a mean (SD) of 15.7 (1.0) weeks gestation (Table 1). Ninety-two per cent of women reported the use of supplements over the previous three months and 60% of these women reported taking supplements that contained iron. Ten per cent of women were iron deficient (ferritin < 15 µg/L), 12% had 25OHD concentrations <25 nmol/L, and 66% <50 nmol/L and there were no treatment group differences. The inclusion of women with 25OHD < 25 nmol/L is explained by the time between the screening blood sample and early pregnancy blood sample. Of women who had 25OHD <25 nmol/L, 17% were also iron deficient compared to 9% in women with 25OHD >25 nmol/L (p = 0.19). Similarly, using a 25OHD concentration < or > than 50 nmol/L, 11% and 8% of women respectively also were iron deficient (p = 0.44).

The MAVIDOS trial (ISRCTN82927713 and EudraCT2007-001716-23) was supported by grants from Arthritis Research UK, Medical Research Council (MRC) [4050502589 (MRC LEU)], Bupa Foundation, National Institute for Health Research (NIHR) Southampton Biomedical Research Centre, University of Southampton and University Hospital Southampton NHS Foundation Trust, and NIHR Oxford Biomedical Research Centre, University of Oxford. V.S.B., K.S.J., and A.P. were funded by the MRC (program code U105960371). The work leading to these results was supported by the European Union’s Seventh Framework Programme (FP7/2007–2013), projects EarlyNutrition and ODIN under grant agreements numbers 289346 and 613977, respectively, and by the BBSRC (HDHL-Biomarkers, BB/P028179/1), as part of the ALPHABET project, supported by an award made through the ERA-Net on Biomarkers for Nutrition and Health (ERA HDHL), Horizon 2020 grant agreement number 696295. 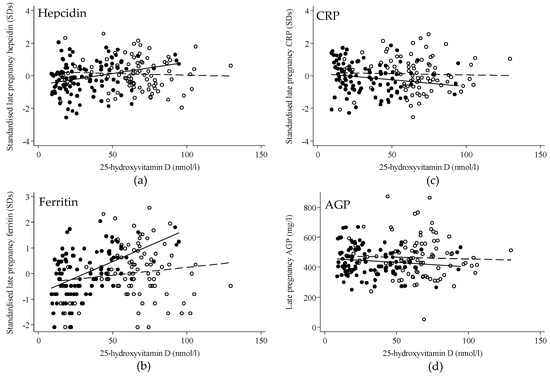 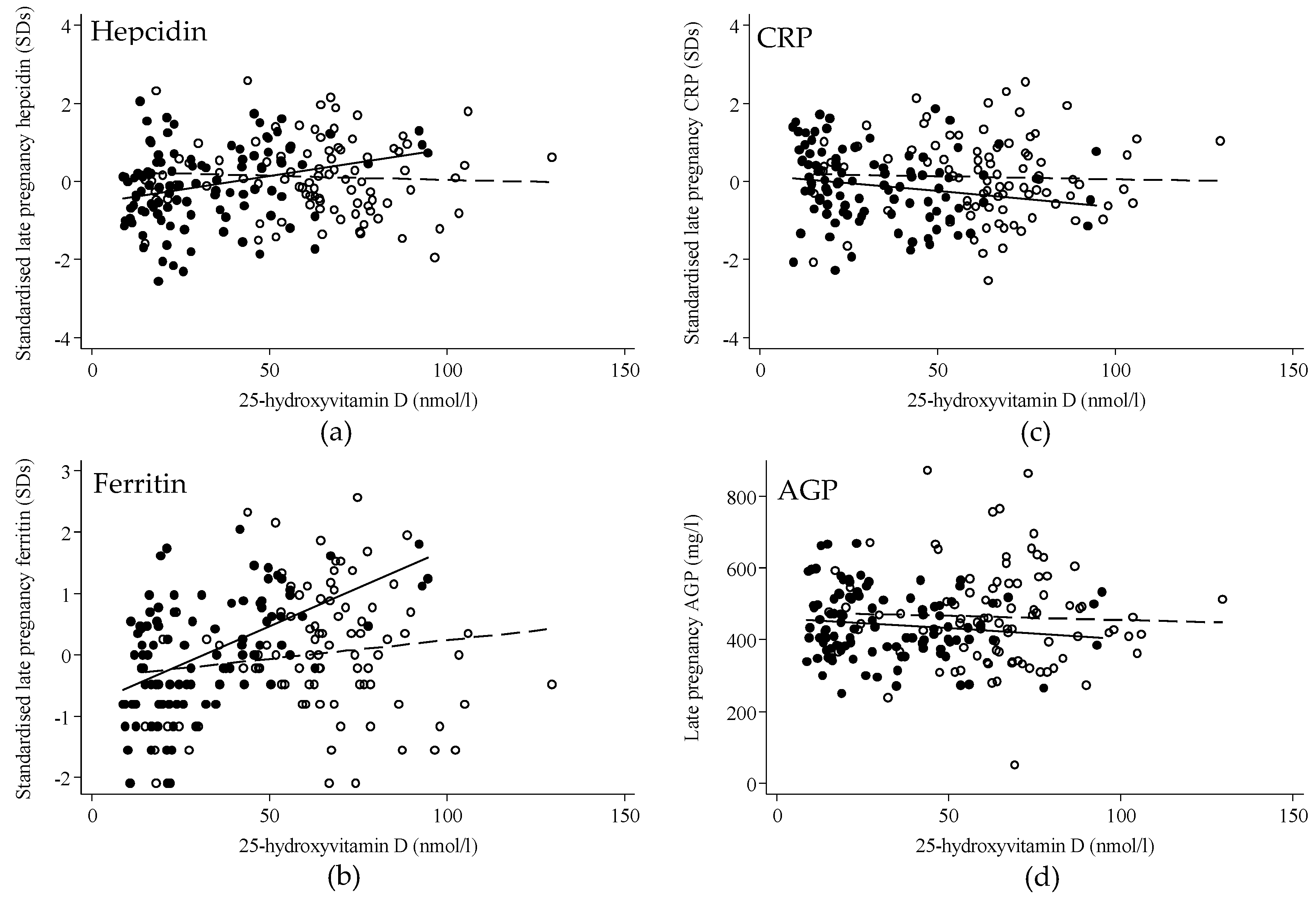