Overweight and obesity are a global concern. Meal replacements (MRs) are portion- and calorie-controlled meals, which make the food environment part of an individual’s weight loss regimen. White sweet potato (WSP; Ipomoea batatas L.), used in traditional medicine in Brazil, Japan, and Taiwan, is a healthy carbohydrate source. In this randomized controlled trial, we assessed the effects of a WSP formula on body weight management in 58 white-collar workers through MR to elucidate the effects of this WSP-MR on factors leading to overweight. The participants consumed either two packs a day for a total of 132 g of WSP (WSP-MR group) or a normal diet daily (non-WSP group) for eight weeks. After eight weeks, body weight, body fat, body mass index, wrist circumference, thigh circumference, calf circumference, mid-arm circumference, and triceps skinfolds decreased significantly in both the groups. Moreover, the WSP-MR group demonstrated a 5% decrease in body weight, body fat, body mass index, and mid-arm circumference and a 3.5% decrease in glycated hemoglobin levels (p < 0.05). The treatment was well tolerated, without side effects or adverse events. Thus, our WSP formula as an MR can facilitate individual weight loss and thus has commercial application in the food industry.
Keywords: white sweet potato; meal replacement; overweight; glycated hemoglobin white sweet potato; meal replacement; overweight; glycated hemoglobin

Overweight and obesity has rapidly become a leading public health concern in many countries. Nutrition and health surveys found that the overweight and obesity prevalence was 37.1% in China in 2002 [1] and 43.3% in Taiwan during 2005–2008 [2]. In the United States, the obesity prevalence among workers with relatively low-obesity occupations (i.e., white-collar jobs) significantly increased between 2004–2007 and 2008–2011, but that among workers with high-obesity occupations (i.e., blue-collar jobs) did not [3]. Therefore, provision of nutritious, healthy, convenient, and safe meal replacement (MR) foods to the overweight or obese population has become a topic of research interest.
A person may substitute a regular meal with an MR for several reasons. MRs are portion- and calorie-controlled meals, which aid in making individuals’ food environments more selective for long-term weight loss [4]. Liquid MR shakes in combination with an energy-restricted diet for weight loss maintenance can more efficiently facilitate weight reduction compared with dieting alone [5,6]. However, MRs have limitations; for instance, insufficient information about MRs before beginning the diet can lead to nutritional imbalance. A meta-analysis indicated that a partial MR plan had greater weight loss efficacy than did a conventional reduced calorie diet, despite equivalent calorie goals for the groups [7]. Thus, the use of MRs may help in reducing the caloric intake by not only reducing the assigned caloric intake level but also minimizing contact with and preparation of foods during nutritional interventions on weight maintenance [8].
White sweet potato (WSP; Ipomoea batatas L.) of the Convolvulaceae family is used as a healthy source of carbohydrate and is part of traditional medicine in Brazil, Japan, and Taiwan [9]. In patients with type 2 diabetes mellitus (T2DM), the tuberous WSP root can reduce insulin resistance as well as fasting plasma glucose, low-density lipoprotein-cholesterol (LDL-C), and fibrinogen levels and increase adiponectin levels [10,11,12]. Ju et al. reported that a 30% dietary supplementation of sweet potato or purple sweet potato considerably ameliorated high-fat diet (HFD)–induced obesity in mice, as well as reducing their body weight and fat accumulation and improving their lipid profile and energy expenditure modulation [13]. Plant-based MRs, such as soy protein formula, can be an effective treatment for weight loss and fat mass reduction in obese people with or without T2DM [14,15].
Maltodextrins (MDs) are polysaccharide produced from starch through partial enzymatic or acid hydrolysis, followed by purification and spray drying. Because of their varied applications, MDs are ubiquitous in foods, beverages, and dietary supplements. However, because glucose from digested MDs is rapidly absorbed in the small intestine, the increased MD use has had potential effects on metabolism and health [16]. In recent years, MDs have been the main resource of carbohydrate in MRs; however, the increased use of refined carbohydrates, such as isolated starches and MDs, can increase obesity rates [17]. Thus far, clinical studies exploring functional tubers as an ingredient to replace MDs in MR formulas have been scant. Therefore, our current experimental hypothesis is that a sweet potato–replaced food product, developed according to the recommended dietary allowance, provides the balanced nutritional requirement for weight loss. Thus, in this study, we assessed the effects of a WSP-MR formula on body weight management among white-collar workers by using an MR strategy in a dietary intervention trial.

Eligible white-collar workers, aged 30–50 years and overweight according to the body mass index (BMI) range of 24–30, according to the Department of Health (DOH) in Taiwan, in the regular health check-ups were recruited from Chunghwa Picture Tubes, Ltd. (Taoyuan, Taiwan). Of the 80 employees informed about this study, 72 individuals agreed to participate and to using their health check-up data. Exclusion criteria were being currently enrolled in another organized weight loss program, lactose intolerance, taking medications that affect appetite, history of gastric bypass or other surgical weight loss procedures, medical conditions (e.g., cancer, substance abuse, and psychiatric disorders), taking vitamins or mineral supplements, unable to join nutrition courses, and contraindications to exercise and changing eating habits. Finally, after a detailed explanation of the study, 60 participants were qualified to participate.
All participants provided their informed written consent; basic anthropometric measurements, such as body height, body weight, BMI, waist circumference (WC), hip circumference (HC), wrist circumference (WrC), waist-hip (W-H) ratio, thigh circumference (ThC), calf circumference (CaC), mid-arm circumference (MAC), mid-arm muscle circumference (MAMC), triceps skinfolds (TrS), blood pressure (BP), and pulse rate, were determined. Before participating in the study, the participants were offered the opportunity to discuss any queries with the primary investigator, physician, and study coordinator. The flow of participant selection is illustrated in Figure 1. The Institutional Review Board of Taipei Medical University approved the study protocol (TMU-JIRB N201604045); this trial is registered at ClinicalTrials.gov (NCT02935179).

In this open-label, randomized, parallel dietary intervention trial, participants were randomly assigned to the non-WSP or WSP-MR groups by using computer-generated identification numbers based on the order of recruitment. The anthropometric measurements, blood samples, dietary records, and clinical and biochemical data were collected at baseline and the end of post intervention week eight. Women and men in both the groups were instructed to follow an energy-restricted diet of approximately 1200 and 1500 kcal per day, respectively. The normal diet in daily three meals comprised vegetables, fruits, whole grain cereals, lean meat, and low-fat dairy products. A registered dietitian suggested and validated the total energy intake and nutritional assessment of three major nutrients according to the percentile: 55% carbohydrate, 30% fat, and 15% protein.
The WSP-MR group was advised to replace two daily meals, namely lunch and dinner, with two packs of shakes and one normal diet meal. The participants received a daily serving of two packets with 132 g of WSP-MR formula (21 g of WSP from 66-g packets). In each packet, 400 mL of warm water was added to provide heat density of 0.65 kcal/mL for each meal. The calorie values and nutrient contents of WSP and WSP-MR are listed in Table 1. The WSP-MR formula represents a balanced diet product for weight reduction according to dietary reference intakes (DRIs) provided by the Ministry of Health and Welfare, Taiwan. The participants were provided sufficient MR sachets free of charge; their compliance was assessed by counting the number of leftover sachets every two weeks.
During an 8-week intervention period, all participants attended four group-training sessions and four face-to-face visits for nutrition education. All participants received instruction manuals including a sample meal plan, recipes, and information regarding physical activities. Group-training sessions were held separately for each group by a nutrition advisor. The nutritional session topics included practical knowledge of food, portion sizes, and meal frequency, all with the aim of changing dietary behavior and lifestyle. At baseline, the participants were instructed on food selection, portion-size estimation, and accurate dietary-intake recording. To ensure compliance with their diet and physical activity during the trial, the participants were asked to record their food intake and physical activities during the weekly intervention period. Dietary records were reviewed for each study participant and analyzed using nutrition analysis and statistical software [18]. WC, HC, WrC, ThC, Ca, MAC, MAMC, and TrS were determined using a flexible tape and electronic skinfold caliper (Skyndex, NM, USA). BP was measured under standardized conditions after a 10-min resting period. Anthropometric measurements and venous blood sampling were performed in the morning after an overnight fasting of at least 12 h at baseline and after the 8-week intervention.

The special sweet potato cultivar WSP (Tainung 10, TNG10, Taiwan) was cultivated by an agricultural institution in Taiwan. The carbohydrate content in the WSP-MR was replaced with 30% (by weight) of TNG10; moreover, additional proteins, fats, vitamins, and minerals were added make it a balanced diet. In the WSP formula, carbohydrate, protein, and fat contributed 52%, 23%, and 25% cal, respectively. A 100 g of WSP-MR contains 390.7 kcal, with 22.4, 10.9, 58.5, and 15.5 g of protein (AOAC 990.03 method), fat (CNS5036 method), carbohydrate, and dietary fiber (AOAC 985.29 method), respectively. This ingredient analysis was validated by the Food Industry Research and Development Institute of Taiwan. To facilitate adherence, all WSP-MRs were provided by Han-Sient Trading Co. (New Taipei City, Taiwan). and given to the participants free of charge.

Statistical analyses were performed using SPSS (version 19; SPSS Inc., Chicago, IL, USA). For intragroup testing, we performed the paired t test with the Wilcoxon signed-rank test to compare the differences in participants’ anthropometric measurements, glycemic markers, and lipid profiles in each group. For intergroup comparisons, we performed the independent t test with the Mann–Whitney U test to compare the final values or nets between the non-WSP and WSP-MR groups. All data are expressed as means ± standard deviations (SDs). The results were considered statistically significant for p < 0.05.

The use of our WSP-MR formula effectively reduced body weight, body fat, BMI, and MAC, and HbA1c levels. This treatment was well tolerated, and no serious side effects were detected. Use of plant tubers as a carbohydrate source in regular diet can provide not only energy but also other nutrients that prevent malnutrition (e.g., fiber, vitamins, and minerals) in individuals requiring weight loss.

We thank the participants and medical staff for their participation. This manuscript was edited by Wallace Academic Editing. 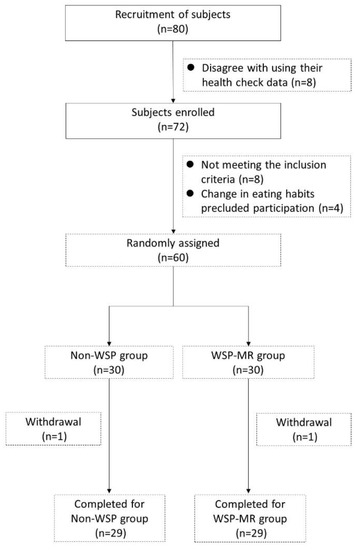 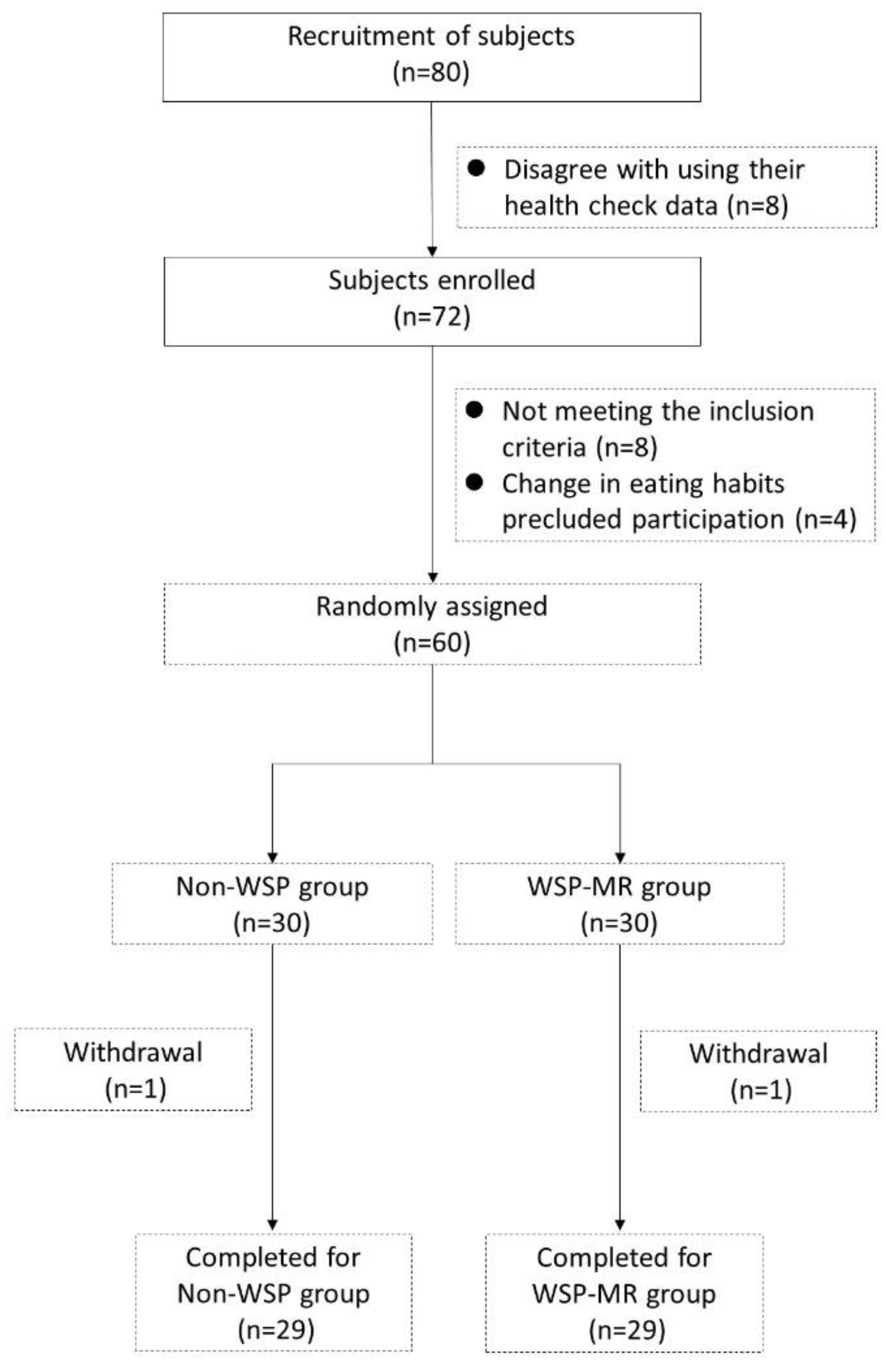