The Psychology of Nutrition with Advancing Age: Focus on Food Neophobia
Previous Article in Journal

A cross-sectional study was conducted including both paediatric and adult CF patients with homozygous Delta F580 and other related mutations, which were consecutively referred for nutritional assessment to the Paediatrics service at the University Clinical Hospital of Valladolid, in a period of 18 months. The local ethics committee at the University Clinical Hospital reviewed and approved this study. Anthropometric assessment (weight, height) using standard techniques and Z-score of weight-for-age, height-for-age, weight-for-height, and BMI were calculated using Orbegozo Tables [41]. The growth rate of CF patients was calculated by using clinical history data. The Score Norman-Crispin (>5), forced vital capacity (FVC% < 80%), and forced expired volume in 1 s (FEV1 < 80%) predicted value by spirometry to estimate respiratory-insufficient (RI), and the coefficient fat-absorption (CFA > 94%) by 72-h quantitative faecal fat collection to value pancreatic-sufficient (PS) and insufficient (PI) were realized. All patients were treated with pancreatic enzyme replacement therapy (PERT) and fat-soluble vitamin supplements (Table 1).
Fasting blood samples were collected and all research procedures minimized the risk of contamination. The SZC was conducted at Chemistry Department of the University of Valladolid using an atomic absorption spectrophotometer (model PU9400 Philips) [42]. Serum zinc <70 μg/dL in children <10 years of both sexes and in women aged ≥10 and <74 μg/dL in men aged ≥10 were used as cutoff to evaluate hypozincemia [31]. We examined the activity of acute phase proteins as inflammatory markers, including C-reactive protein (CRP) > 4 U/L and erythrocyte sedimentation rate (ESR) woman > 20 mm/h, men > 15 mm/h, by standardized methods. Diet analysis was made through a prospective dietary survey of 72 h (including one of the weekend days). From that, daily EI (calories) and dietary zinc intake based on estimated portions and referred for the percentage of Dietary Reference Intake (%DRI) was assessed using the Mataix Food and Health computer program [43]. In order to assess inadequate dietary zinc intake, we used the cut point <80%DRI.
The marginal or subclinical zinc status is defined as a deficit state without pathognomonic clinical signs and with an acceptable (normal values) SZC in patients with dietary zinc deficiency [44]. The risk of zinc deficiency by height-for-age of growing infants and children (>20% of stunting), dietary zinc intake (>25% of dietary zinc deficiency), and SZC (>20% of hypozincemia) was used to estimate zinc status (Figure 1). Data are expressed as mean ± standard deviation score (SDS), median, ranges, and percentages. Differences between normal and deficient groups with nutritional status variables were assessed using unpaired Student t-tests or Wilcoxon rank tests for non-normally distributed variables. Pearson correlation coefficients were performed to test for significant associations among the same variables. The significance level was set at p < 0.05. Analyses were performed using the SPSS/PC software (IBM Corp., Armonk, NY, USA).

We are grateful to the staff of Paediatric service of University Clinical Hospital and the Laboratory of Instrumental Techniques of the Chemistry Department of the Valladolid University. 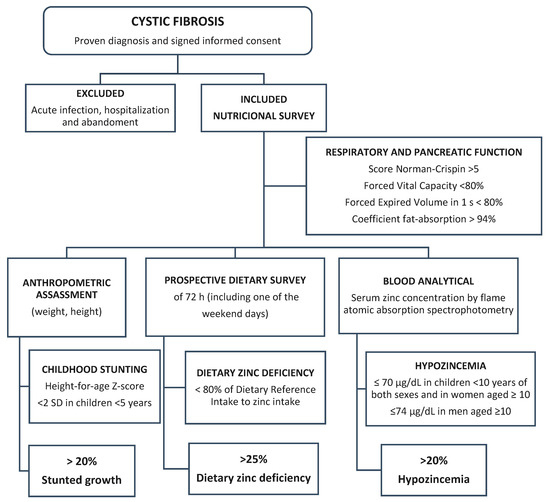 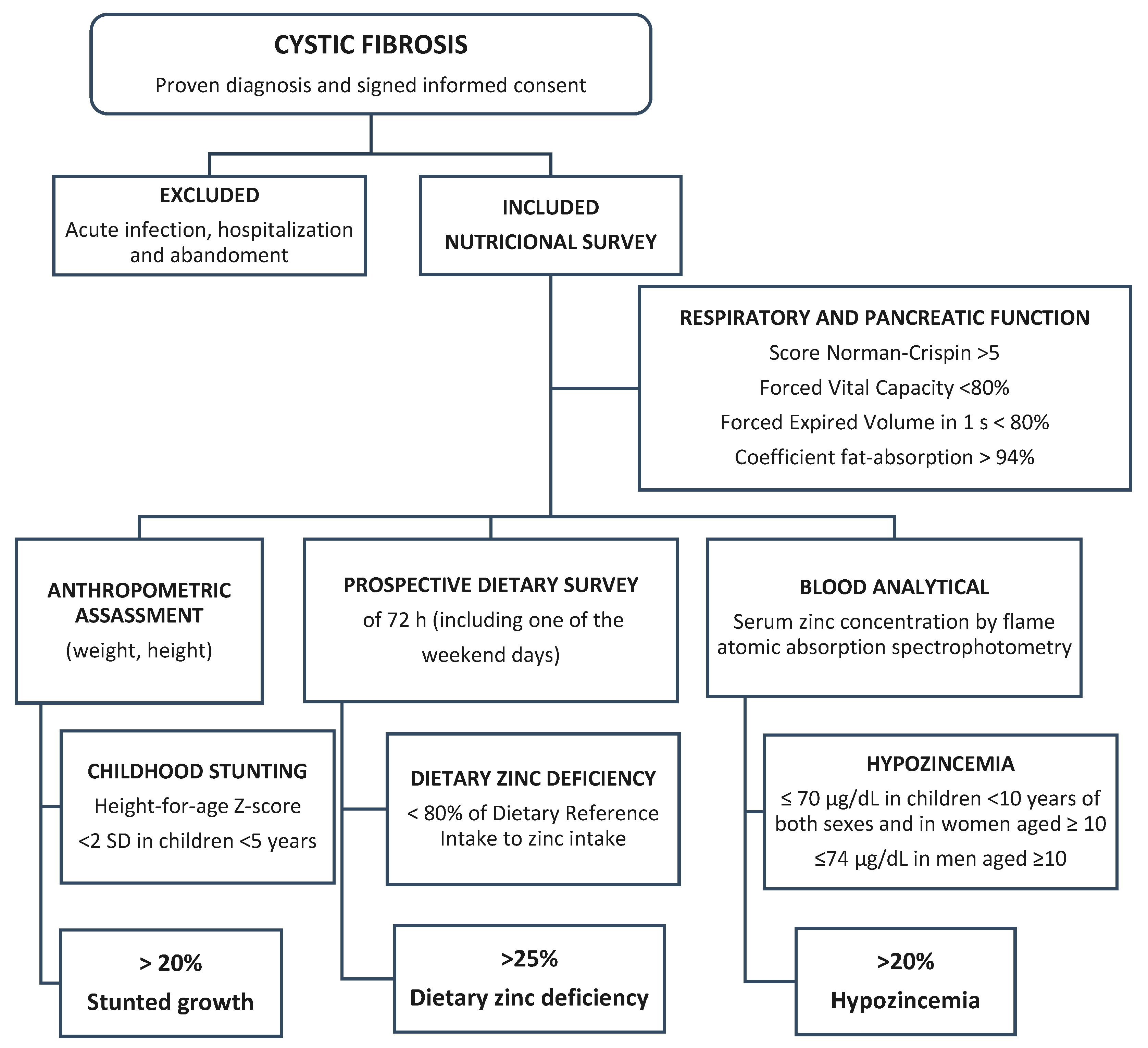 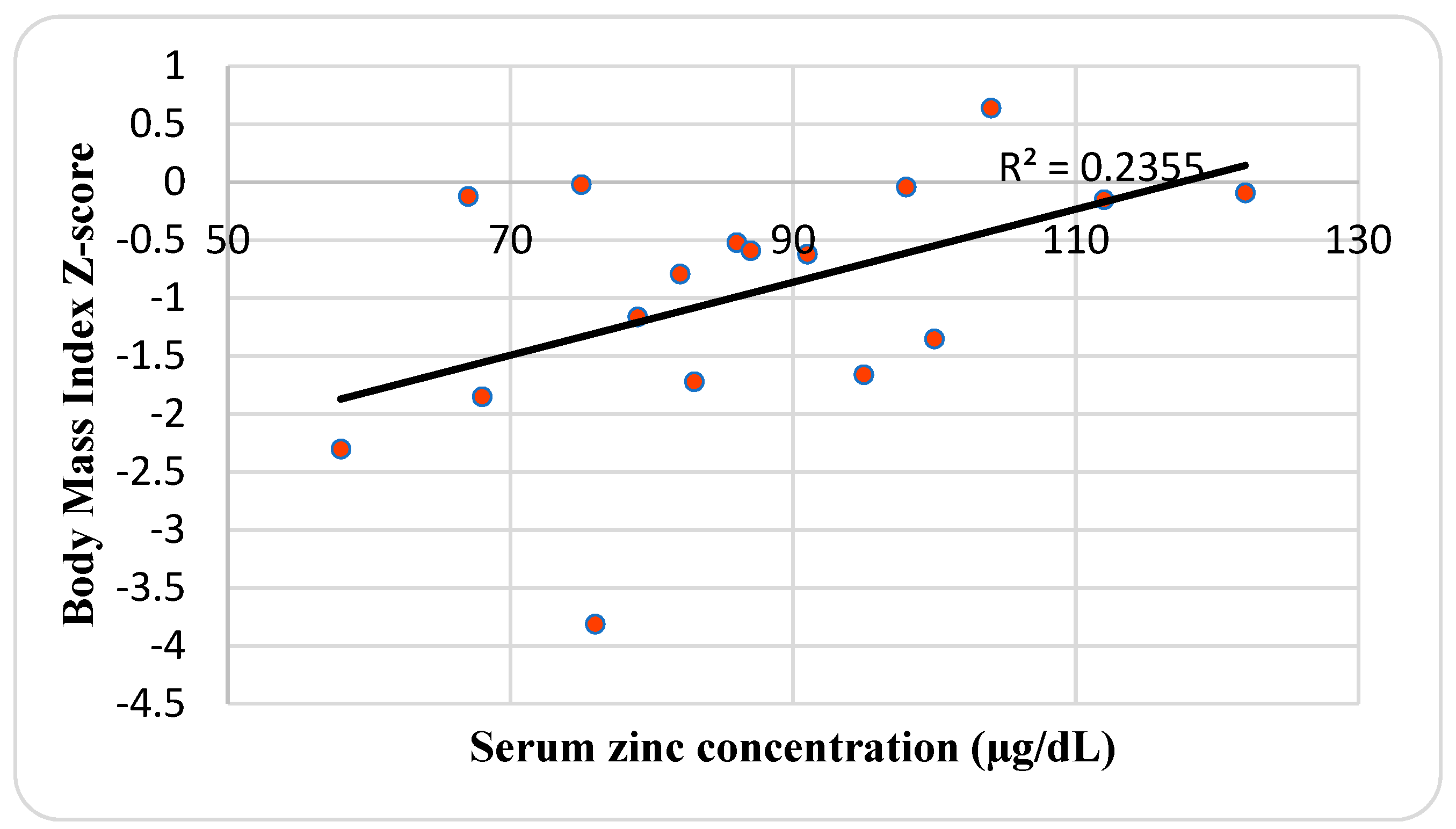 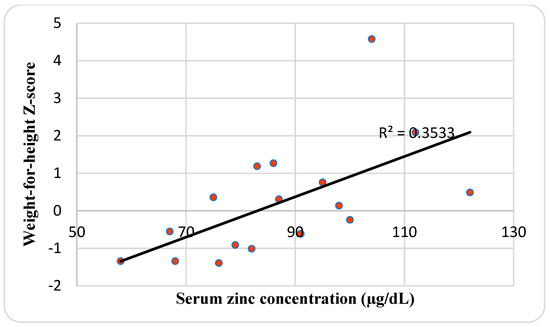 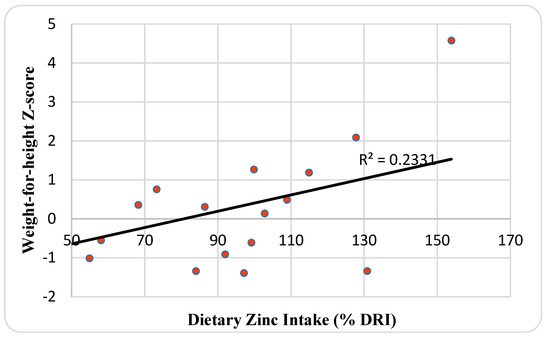 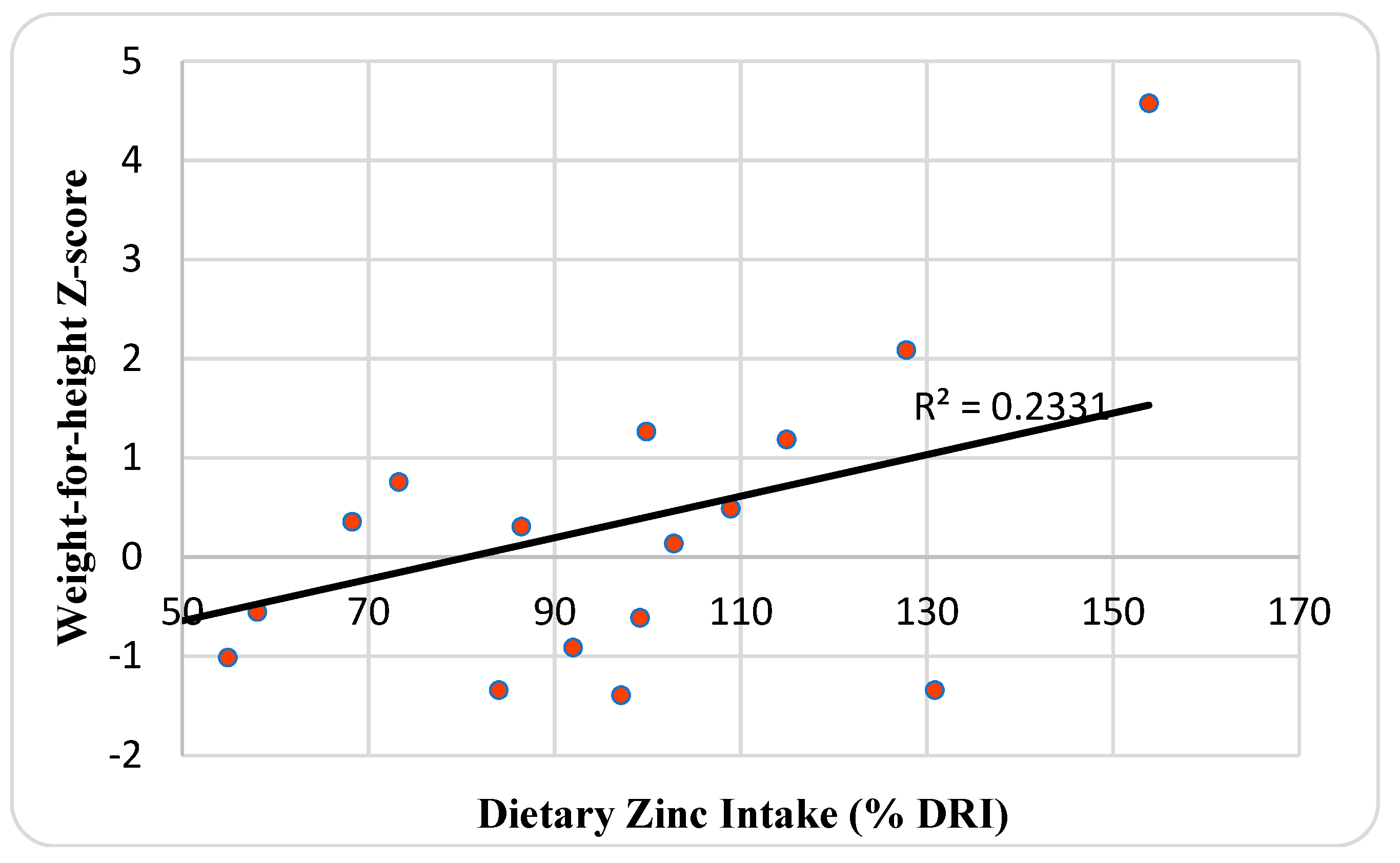 Table 3. Differences between fibrosis cystic patients.
Table 3. Differences between fibrosis cystic patients.
FVC: forced vital capacity; FEV1: forced expired volume in 1 second; %DRI: Percentage of Dietary Reference Intake.
© 2019 by the authors. Licensee MDPI, Basel, Switzerland. This article is an open access article distributed under the terms and conditions of the Creative Commons Attribution (CC BY) license (http://creativecommons.org/licenses/by/4.0/).
We use cookies on our website to ensure you get the best experience. Read more about our cookies here.
Accept
We have just recently launched a new version of our website. Help us to further improve by taking part in this short 5 minute survey here. here.
Never show this again