An Active Lifestyle Reinforces the Effect of a Healthy Diet on Cognitive Function: A Population-Based Longitudinal Study
Previous Article in Special Issue

The development and progression of alcoholic fatty liver disease (AFLD) is influenced by the intestinal microbiota. Astaxanthin, a type of oxygenated carotenoid with strong antioxidant and anti-inflammatory properties, has been proven to relieve liver injury. However, the relationship between the gut microbiota regulation effect of astaxanthin and AFLD improvement remains unclear. The effects of astaxanthin on the AFLD phenotype, overall structure, and composition of gut microbiota were assessed in ethanol-fed C57BL/6J mice. The results showed that astaxanthin treatment significantly relieves inflammation and decreases excessive lipid accumulation and serum markers of liver injury. Furthermore, astaxanthin was shown to significantly decrease species from the phyla Bacteroidetes and Proteobacteria and the genera Butyricimonas, Bilophila, and Parabacteroides, as well as increase species from Verrucomicrobia and Akkermansia compared with the Et (ethanol)group. Thirteen phylotypes related to inflammation as well as correlated with metabolic parameters were significantly altered by ethanol, and then notably reversed by astaxanthin. Additionally, astaxanthin altered 18 and 128 KEGG (Kyoto Encyclopedia of Genes and Genomes) pathways involved in lipid metabolism and xenobiotic biodegradation and metabolism at levels 2 and 3, respectively. These findings suggest that Aakkermansia may be a potential target for the astaxanthin-induced alleviation of AFLD and may be a potential treatment for bacterial disorders induced by AFLD. View Full-Text
Keywords: astaxanthin; Akkermansia; alcoholic fatty liver disease; inflammation; gut microbiota astaxanthin; Akkermansia; alcoholic fatty liver disease; inflammation; gut microbiota
►▼ Show Figures 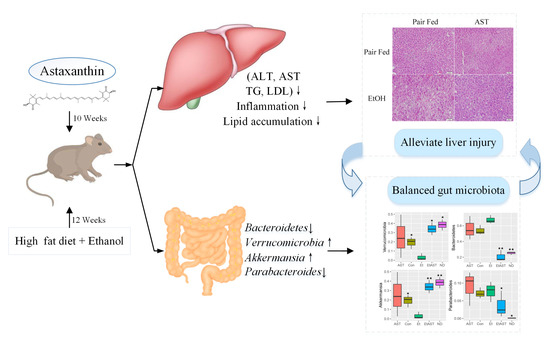