It is well appreciated that diet has a significant role in disease development and protection. More recently, the quality of carbohydrates and fats has been under scrutiny for their impact on health. Epidemiologic studies have revealed that consumption of refined carbohydrate-containing diets and/or diets high in saturated fat (SFA) is associated with increased risk for coronary heart disease [1] and increased prevalence of type 2 diabetes [2]. Interventional trials have shown that consumption of relatively high amounts (52–62% carbohydrate energy) of refined carbohydrates induces adverse effects on glycemic [3] and blood lipid regulation [4,5] and regular intake of SFA and trans fats have been shown to increase total and low-density lipoprotein (LDL) cholesterol [6,7]. Accordingly, diets containing unwarranted amounts of refined carbohydrates and SFA are considered risk factors in developing metabolic and glycemic disturbances making them targets for control.
Saturated fats have been of cardio-metabolic risk concern for years, while diets containing higher amounts of monounsaturated fatty acid (MUFA) are suggested to be protective and have beneficial effects, such as enhancing insulin sensitivity [8] and improving plasma total and LDL-cholesterol levels [6,7]. Likewise, dietary patterns, including the Dietary Approaches to Stop Hypertension (DASH) diet, Mediterranean diet, and the Seventh-day Adventists diet, which emphasize eating more fruits and vegetables, nuts, whole grains, MUFA oils and fish, and have consistently been associated with health benefits [9,10,11]. In the last update of the Dietary Guidelines for Americans (2015–2020), recommendations highlighted eating nutrient dense foods and suggested that replacing SFA with complex carbohydrates, polyunsaturated (PUFA) and or MUFA could benefit total cholesterol and LDL-cholesterol concentrations [12]. Hence, dietary patterns emphasizing certain dietary components, such as MUFA, while decreasing other components, such as SFA or refined, readily digestible carbohydrates, may have favorable effects on cardio-metabolic health. From the consumer perspective, ease of exchange is critical when making dietary modifications; and single foods that inherently contain these dietary components are ideal for helping consumers meet heart and metabolically healthy goals.
Avocados are a distinctive fruit characterized by their nutrient profile containing MUFA, PUFA, dietary fiber, folate, potassium and several essential micronutrients and bioactive phytochemicals [13]. A recent clinical trial reported that consuming a diet containing one avocado a day for 5 weeks significantly reduced plasma LDL-cholesterol and small dense LDL-particle concentrations [14]. Furthermore, it has been demonstrated that consuming avocados within the context of a typical Western meal had favorable effects on glucose homeostasis [15] and insulin responses [16].
The typical Western meal is high in available carbohydrate and/or fat and has consistently been shown to disturb cardio-metabolic sequences including changes in lipid/lipoprotein metabolism, glucose homeostasis and insulin responsiveness [17]. Furthermore, exaggerated metabolic responses are detrimental to endothelial function via increased reactive oxygen species (ROS), vascular and intracellular adhesion molecules, pro-inflammatory mediators and vascular permeability [18,19]. These effects are apparent acutely (i.e., in the postprandial state) and chronically [20,21]. Managing day to day acute oxidative-immuno-metabolic imbalances that can result in cellular damage and dysfunction of tissues, such as the endothelium is an important strategy in reducing risk for the development and progression of cardio-metabolic diseases [22,23,24,25].
Therefore, the aim of the present study was to investigate the strategy of incorporating avocados into a breakfast meal replacing mainly carbohydrates with fat by adding MUFA and PUFA fats from avocados on postprandial indices of metabolic and vascular health. Endpoints of interest included changes in glycemic indices along with changes in endothelial function as measured by flow-mediated dilation (FMD) and biomarkers of inflammation and oxidative stress/damage.

Thirty-nine subjects (21 men and 18 women) were enrolled and randomized in the study; 31 subjects (15 men and 16 women) completed all protocol specified procedures (Figure 1).

Eligible subjects were non-smoking men and women with body mass index (BMI) between 25 and 35 kg/m2, with elevated fasting glucose (5.0–6.4 mmol/L) and insulin (no greater than 90.3 pmol/L) concentrations, and between 25 and 60 years of age. Individuals also had to have no clinical evidence or documented history of cardiovascular, respiratory, renal, gastrointestinal, or hepatic disease to be eligible.

Subjects who reported following a vegan diet, had unusual dietary habits (e.g., pica), were actively losing weight or trying to lose weight, addicted to drugs or alcohol or smoked or who were taking over the counter supplements (i.e., anti-oxidant, anti-inflammatory) or prescription medications (i.e., lipid-lowering or blood pressure lowering medications) or presented with significant psychiatric or neurological disturbances—all of which may interfere with study procedures or endpoint evaluation—were not eligible for participation. Subjects who consumed three or more servings of nuts per week were also excluded. Past smokers were allowed in the study if cessation > 2 years. Each subject was studied once.

The trial is a single-center, randomized, single-blinded, diet-controlled, 3-arm, 6 h postprandial, crossover study performed at the Clinical Nutrition Research Center (CNRC) at the Illinois Institute of Technology (Illinois Tech, Chicago, IL, USA). The study was conducted according to the guidelines laid down in the Declaration of Helsinki and the International Conference on Harmonization-Good Clinical Practice (ICH-GCP) and all procedures involving human subjects were approved by the Institutional Review Board at the Illinois Institute of Technology (IRB2015-001). Written informed consent was obtained from all subjects before the initiation of the study. The study was conducted from 2015 to 2016 in Chicago, IL, USA. This trial was registered at clinicaltrials.gov as NCT02479048.

All qualified subjects participated in a pre-study visit that included instruction on completing study questionnaires, 24 h dietary recalls (the National Cancer Institute ASA24® Recall online, the National Cancer Institute, Bethesda, MD, USA), and strategies for restricting avocado and olive oil intake and colored plant foods rich in phytonutrients 3 days prior to each postprandial test day visit (PPD). In addition, subjects were asked to restrict intake of alcohol, coffee, tea, and other caffeinated beverages and limit their physical activity 24 h prior to a testing day. Main dish (one frozen Stuffer’s Entrée, ~270 Kcals) and soft drinks (Lemonade or Ginger ale ~270 kcals) the night before each testing day were provided and subjects chose side dishes at home, which were monitored to maintain consistency among visits. Additionally, subjects were asked to maintain usual dietary intake and sleep patterns and not consume anything except for water after 10 pm the night before a testing day. Each testing day started with confirming adherence to the study-specific protocol (diet, exercise, sleep, and fasting status). Thereafter, body weight and blood pressure were measured and baseline FMD assessment performed. After the FMD, an intravenous catheter was placed and baseline blood sample collected. Next, subjects received one of the three test breakfast meals according to the randomization schedule and were asked to finish eating within 20 min (Figure 2). Blood samples were collected at 0 h (fasting, baseline) and 0.5 h, 1 h, 2 h, 3 h, 4 h, 5 h, and 6 h starting timers at the first bite of breakfast (Figure 2). FMD was measured at 1 h 20 min and 3 h 20 min. After the final 6 h blood collection, catheters were removed and subjects were prepared for their next visit, repeating instructions from the pre-study visit and confirming the date and time of the next scheduled PPD. To minimize variability due to female hormone fluctuations, women were studied in the follicular phase of their menstrual cycle. For this purpose, time between study visits could be up to 4 weeks.

Three meals were prepared: two meals contained either 68 g fresh Hass avocado (1/2 avocado; Half-A) or 136 g fresh Hass Avocado (1 avocado; Whole-A) and one meal (the Control meal) did not contain avocado (Table 1 and Table 2). Avocado meals aimed to replace some of the carbohydrate components in the Control meal while maintaining similar energy content. All meals were prepared in the metabolic kitchen at the CNRC under the supervision of the registered dietitian following strict food safety standards. Subjects came to the laboratory on three separate occasions. Subjects consumed each meal once based on a randomly assigned sequence by computer-generated randomization allocation list.

Based upon previous studies [27,28], a sample size of 24 completers was calculated for detecting a 12% difference in 2 h incremental area under the curve (iAUC) for glucose with a power of >80%. 25% attrition rate was included in enrollment plan to meet sample size requirements.

Subject characteristics were analyzed and tabulated using descriptive statistics from data collected at the screening visit. Results were presented as numbers and percentages, as appropriate. Shapiro-Wilk tests, skewness, and kurtosis were used to assess normality for continuous variables. Data not conforming to normal distribution patterns were log transformed prior to analysis and noted accordingly. Outlier removal or equipment malfunction (ultrasound) may have resulted in fewer evaluable subjects for secondary endpoints and were indicated accordingly. Mixed-model analysis of repeated measures was performed on each quantitative outcome variable to test main effects of 3 meals (Control meal, Half-A, and Whole-A) and time (h) using PROC MIXED via Window PC-SAS (version 9.4; SAS Institute Inc., Cary, NC, USA). In the final analyses, meal and time were included and the corresponding baseline value was included as a covariate (p < 0.0001) and the Kenward-Roger correction and the method of restricted maximum likelihood were used in all Mixed Models [29,30,31]. Multiple comparisons within and among meals over 6 h postprandial time were performed by mixed model statistical significance (p < 0.05). Postprandial peak concentrations of metabolic markers were analyzed. The results of the statistical analysis were presented as least square means (LSM) ± SEMs unless indicated otherwise. Statistical significance was based on 2-sided meal comparison at the 5% significance level under a null hypothesis of no difference between meals.

Consuming test meals containing either half or full avocado (Half-A and Whole-A) significantly decreased the postprandial glycemic and insulinemic responses to meals over 6 h compared to the Control meal (both p < 0.0001), including 2 h iAUC (p < 0.0001). Postprandial glucose peak concentrations were also significantly lower after consuming both avocado-containing meals (7 mmol/L ± 0.2) compared to the control meal (8.1 mmol/L ± 0.2, p < 0.0001). Similar effects were observed in postprandial insulin peak concentrations after both avocado-containing meals compared to the Control meal (p < 0.005). No differences between the Half-A and Whole-A meals on glucose and insulin were observed (Figure 3A,B).

In conclusion, replacement of energy from carbohydrate with energy from avocados rich in MUFA, PUFA, fiber and bioactive phytochemicals showed beneficial effects on glycemic and vascular markers during an acute postprandial challenge in middle-aged, overweight/obese adults. Incorporating fresh Hass avocados in meals can help people achieve dietary recommendations to eat more fruits and vegetables and simple substitution strategies with avocados for carbohydrates can add to the nutrient diversity of the diet and potentially have important cardio-metabolic benefits worthy of investigating further.

The authors’ responsibilities were as follows—B.B.-F. and I.E.: designed the research, reviewed data and interpreted results; I.E.: performed laboratory analysis and interpretation; B.B.-F. and E.P.: conducted statistical analyses and E.P.: drafted the manuscript; B.B.-F.: had primary responsibility for the final content of the manuscript. All authors contributed to critical review and revision of the manuscript for important intellectual content. All authors read and approved the final manuscript. None of the authors had a conflict of interest in this study.

This research was supported by the Hass Avocado Board, Irvine, CA, USA.

The planning, organization of the study as well as data analyses was performed solely by the investigators. The founding sponsors had no role in the design of the study; in the collection, analyses, or interpretation of data; in the writing of the manuscript, and in the decision to publish the results.

Britt Burton-Freeman is a member of Avocado Nutrition Science Advisory. 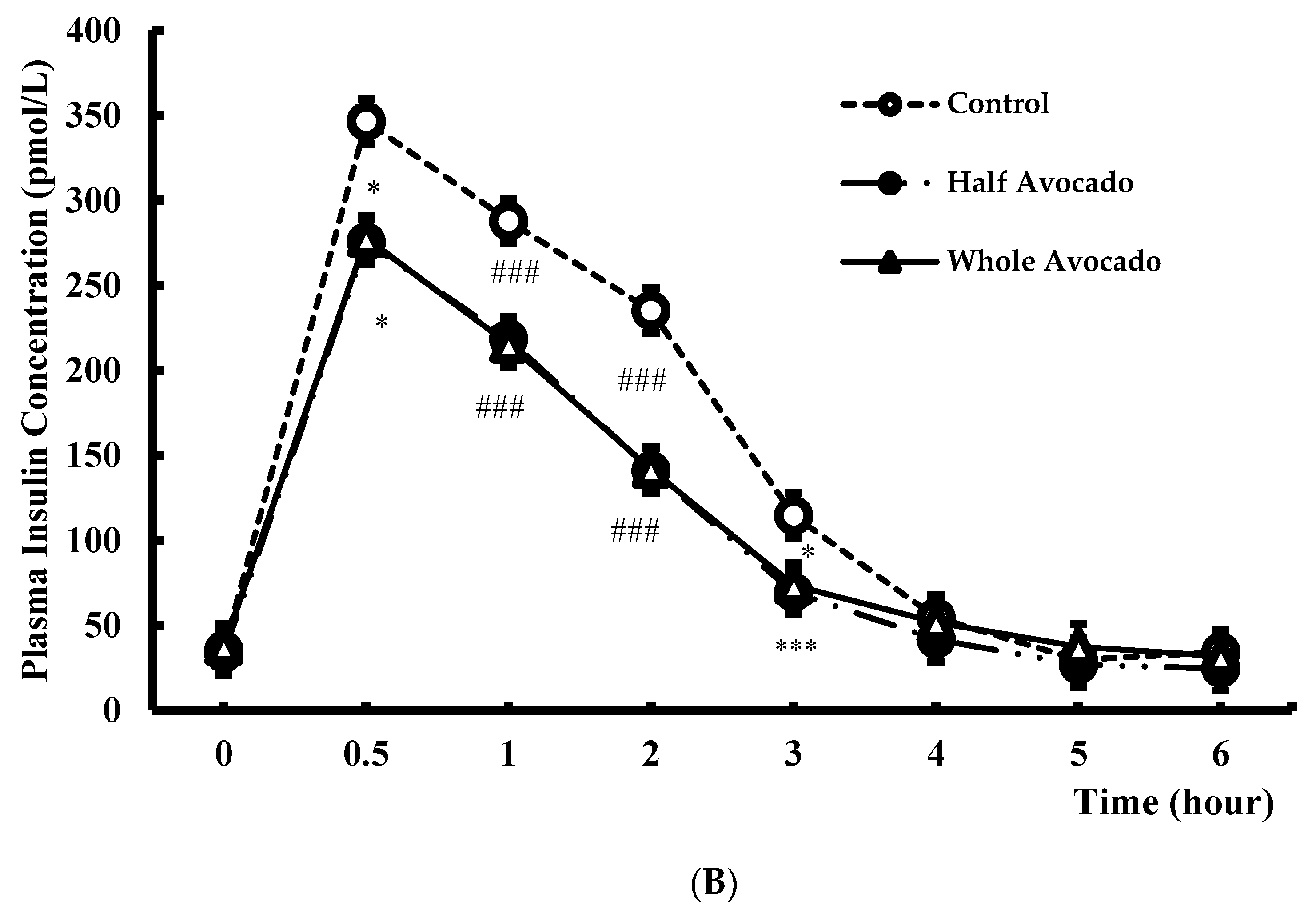