Several observational studies have reported an association between low levels of vitamin D (VD) and poor cognition in adults, but there is a paucity of data on such an association in adolescents. We investigated the association between VD and cognitive function or academic achievement among 1370 adolescents, who were selected from public middle schools in Kuwait, using stratified multistage cluster random sampling with probability proportional to size. Plasma 25-hydroxy VD (25-OH-D) was measured using liquid chromatography-tandem mass spectrometry (LC-MS/MS). An age-adjusted standard score (ASC), calculated from Raven’s Standard Progressive Matrices test, was used to evaluate cognitive function; academic achievements were extracted from the schools’ records. Data on various covariates were collected from the parents through a self-administered questionnaire and from the adolescents using face-to-face interviews. 25-OH-D was weakly correlated positively with ASC (ρ = 0.06; p = 0.04). Univariable linear regression analysis showed an association between 25-OH-D categories and ASC after adjusting for gender, but adjusting for parental education was sufficient to explain this association. Multivariable analysis showed no association between 25-OH-D and ASC after adjusting for potential confounders whether 25-OH-D was fitted as a continuous variable (p = 0.73), a variable that is categorized by acceptable cutoff points (p = 0.48), or categorized into quartiles (p = 0.88). Similarly, 25-OH-D was not associated with academic performance. We conclude that 25-OH-D is associated with neither cognitive function nor academic performance in adolescents. View Full-Text
Keywords: 25-hydroxyvitamin D; cognitive function; adolescents; school performance; Raven’s Stranded Progressive Matrices 25-hydroxyvitamin D; cognitive function; adolescents; school performance; Raven’s Stranded Progressive Matrices
►▼ Show Figures 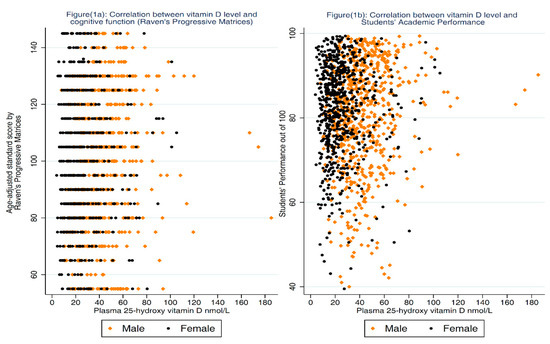