Beverage Consumption among Adults in the Balearic Islands: Association with Total Water and Energy Intake
Next Article in Special Issue

Induction of p53 Phosphorylation at Serine 20 by Resveratrol Is Required to Activate p53 Target Genes, Restoring Apoptosis in MCF-7 Cells Resistant to Cisplatin

Resistance to cisplatin (CDDP) is a major cause of cancer treatment failure, including human breast cancer. The tumor suppressor protein p53 is a key factor in the induction of cell cycle arrest, DNA repair, and apoptosis in response to cellular stimuli. This protein is phosphorylated in serine 15 and serine 20 during DNA damage repair or in serine 46 to induce apoptosis. Resveratrol (Resv) is a natural compound representing a promising chemosensitizer for cancer treatment that has been shown to sensitize tumor cells through upregulation and phosphorylation of p53 and inhibition of RAD51. We developed a CDDP-resistant MCF-7 cell line variant (MCF-7R) to investigate the effect of Resv in vitro in combination with CDDP over the role of p53 in overcoming CDDP resistance in MCF-7R cells. We have shown that Resv induces sensitivity to CDDP in MCF-7 and MCF-7R cells and that the downregulation of p53 protein expression and inhibition of p53 protein activity enhances resistance to CDDP in both cell lines. On the other hand, we found that Resv induces serine 20 (S20) phosphorylation in chemoresistant cells to activate p53 target genes such as PUMA and BAX, restoring apoptosis. It also changed the ratio between BCL-2 and BAX, where BCL-2 protein expression was decreased and at the same time BAX protein was increased. Interestingly, Resv attenuates CDDP-induced p53 phosphorylation in serine 15 (S15) and serine 46 (S46) probably through dephosphorylation and deactivation of ATM. It also activates different kinases, such as CK1, CHK2, and AMPK to induce phosphorylation of p53 in S20, suggesting a novel mechanism of p53 activation and chemosensitization to CDDP. View Full-Text
Keywords: breast cancer; cisplatin; p53; phosphorylation; resistance; resveratrol breast cancer; cisplatin; p53; phosphorylation; resistance; resveratrol
►▼ Show Figures 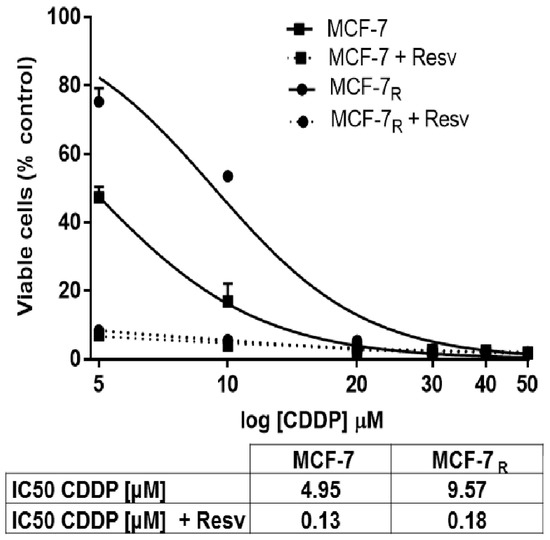